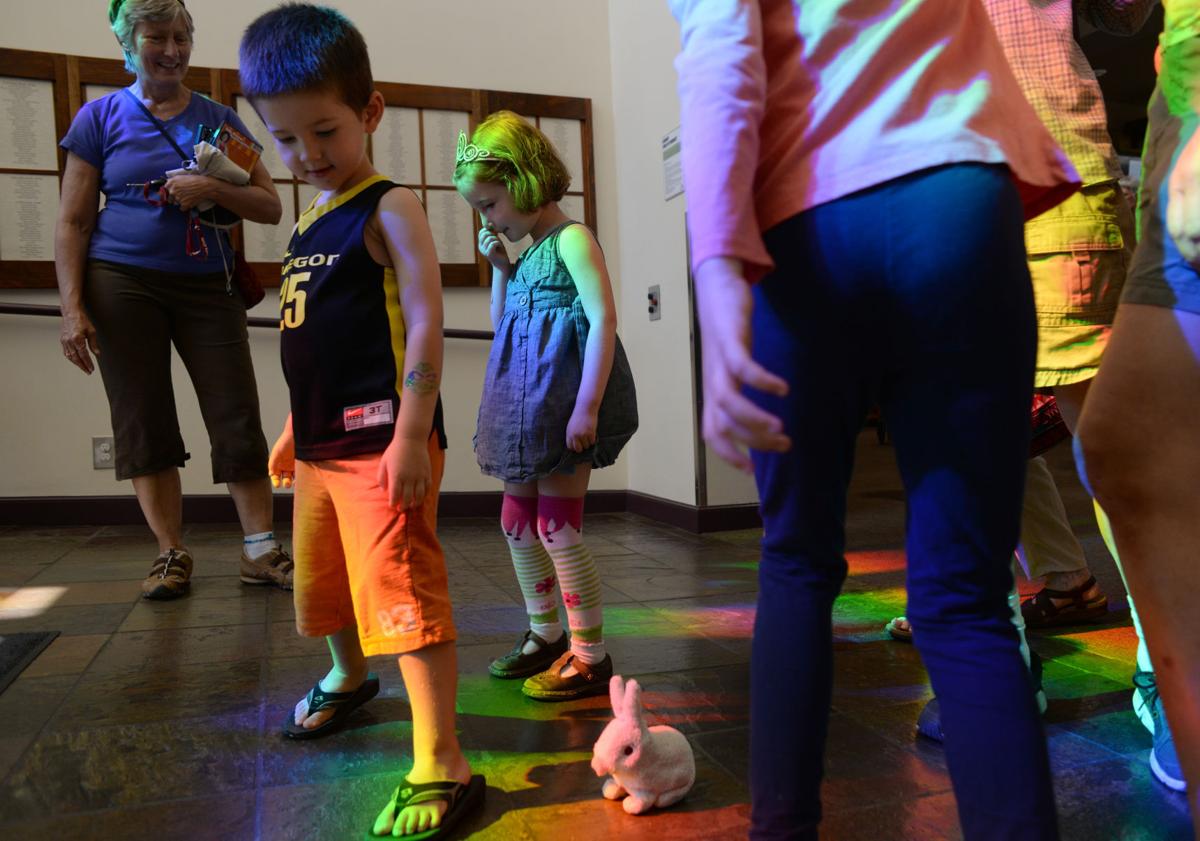 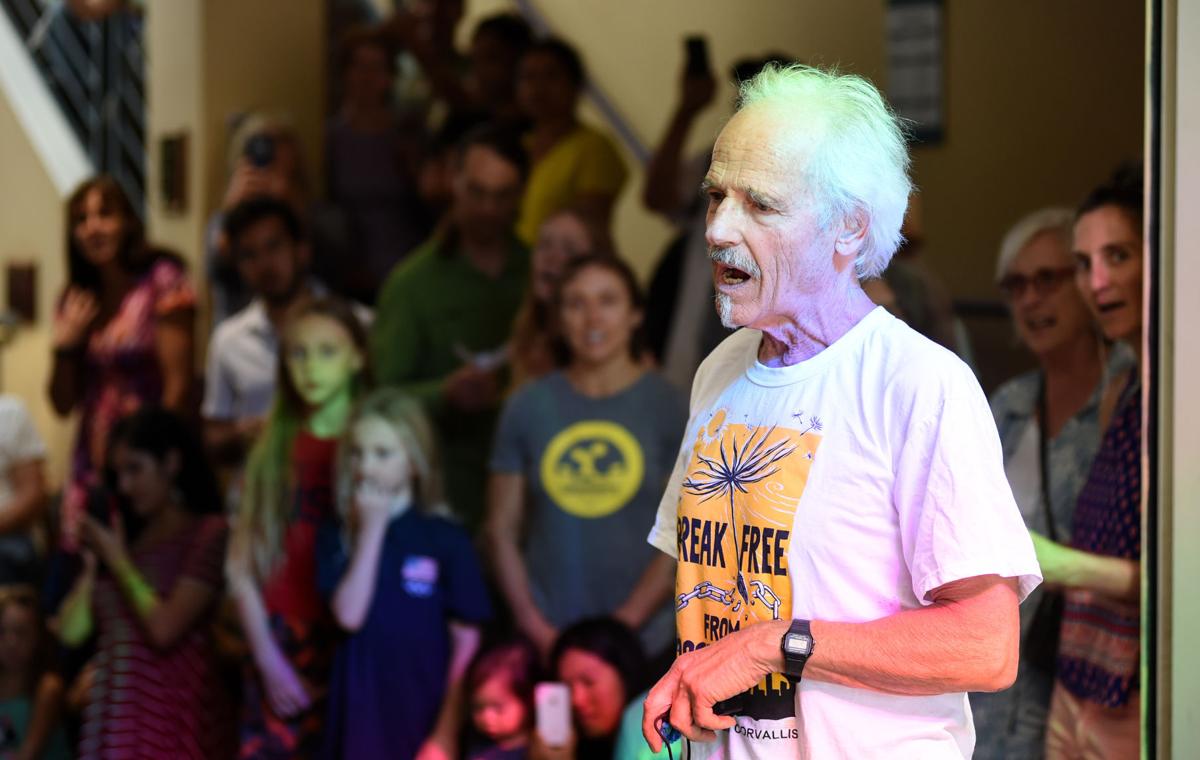 Artist Peter Erskine addresses the more than 100 people gathered inside the Corvallis-Benton County Library for the unveiling of his art installation. 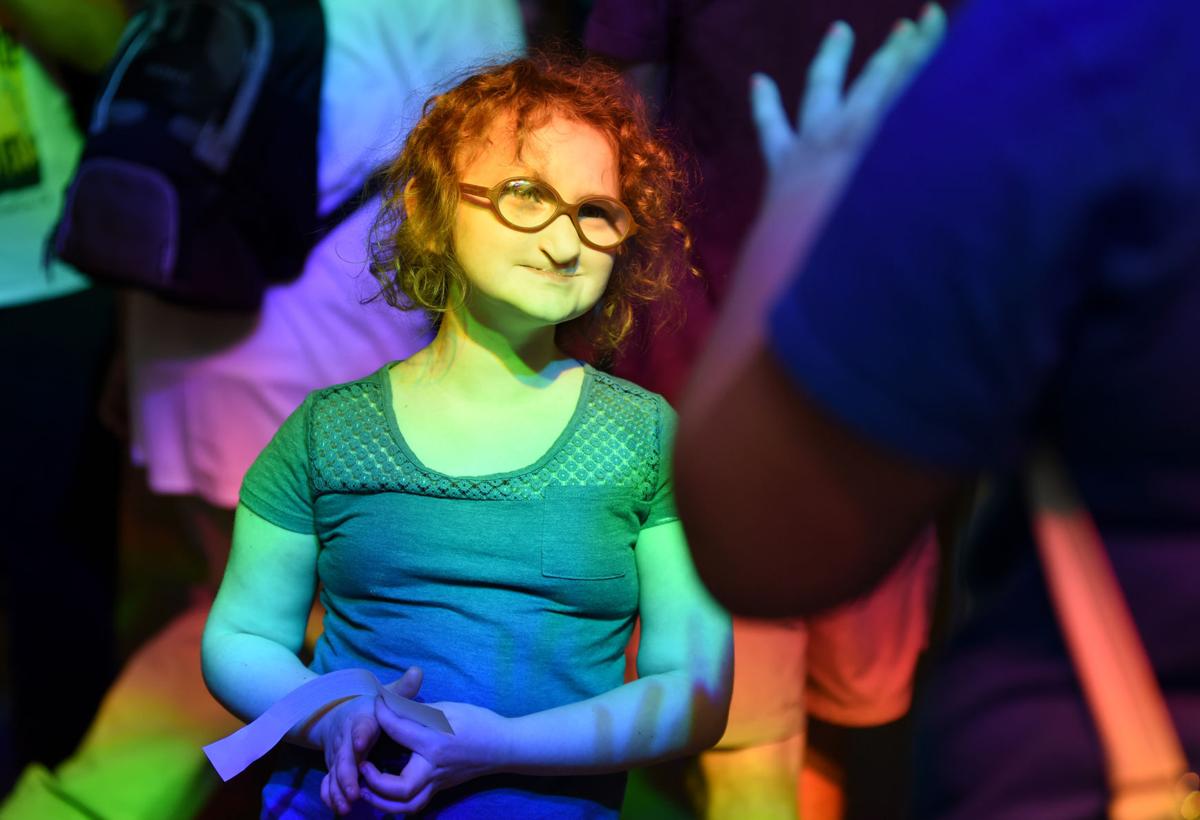 Abigail Collins, center, has her picture taken under the rainbow cast from the "Three Secrets of the Sun" art piece. 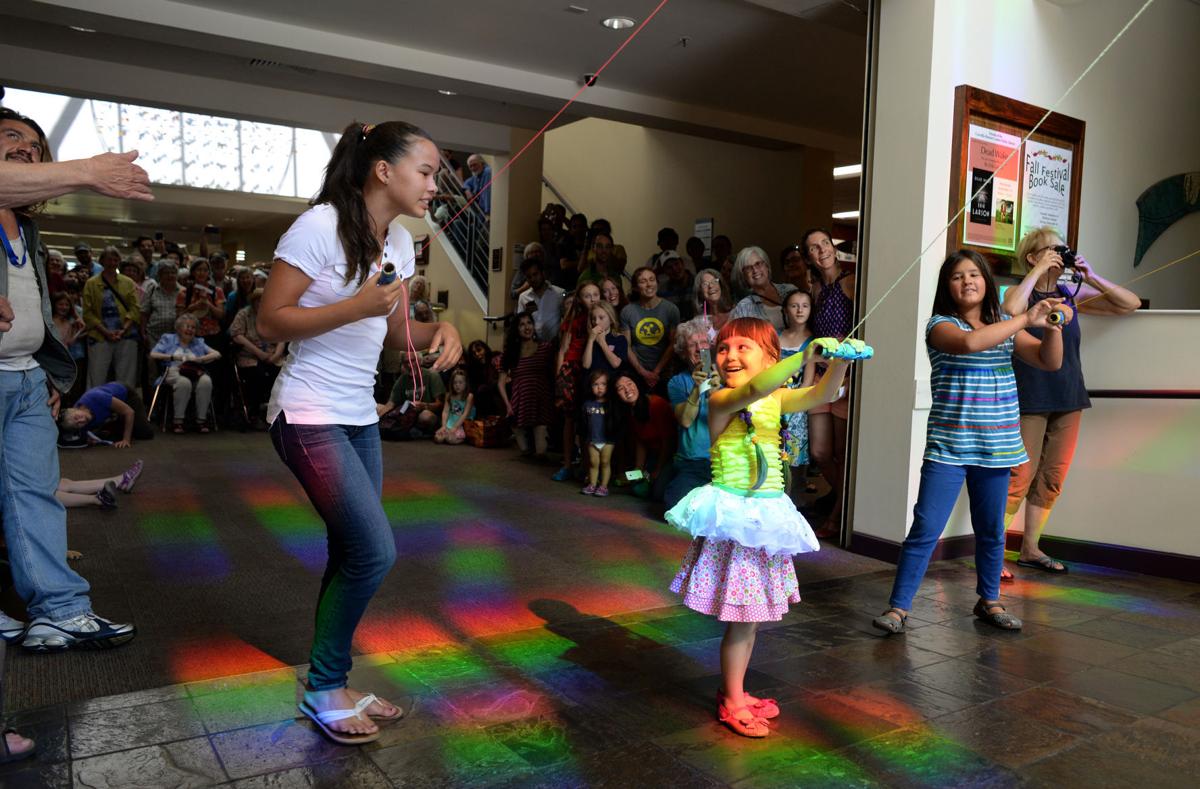 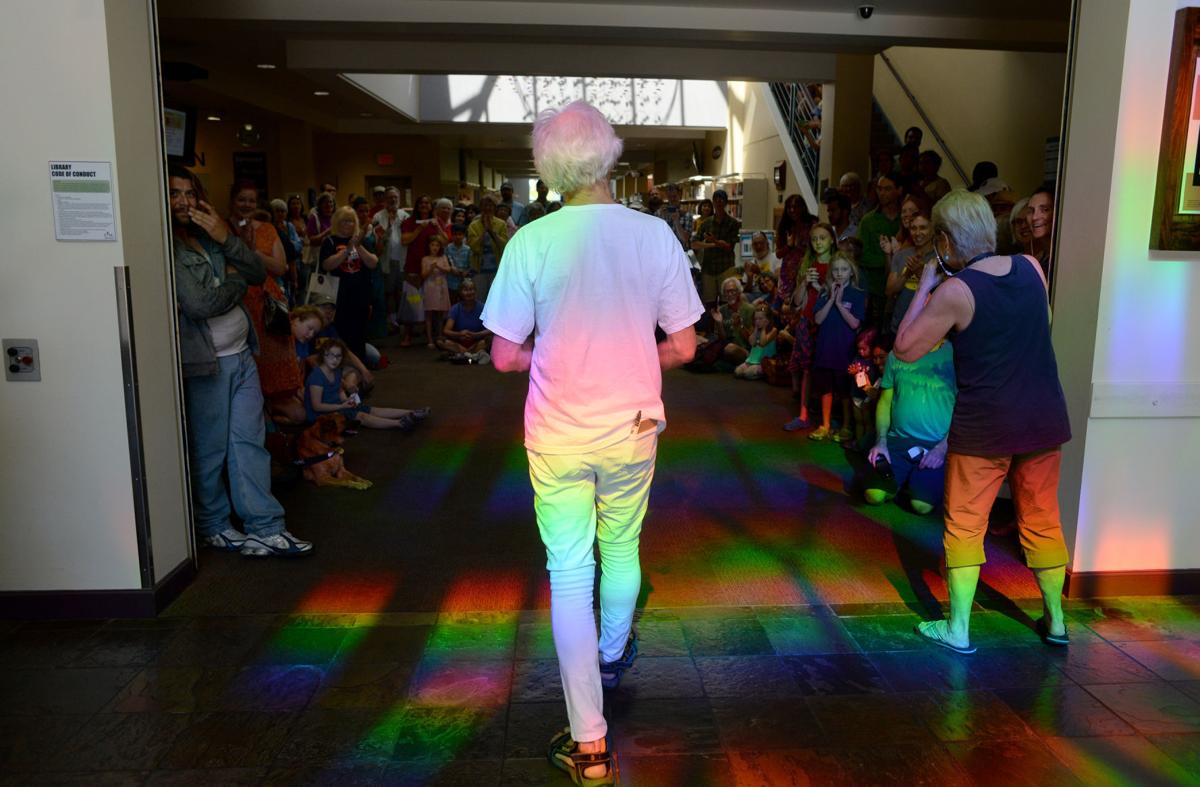 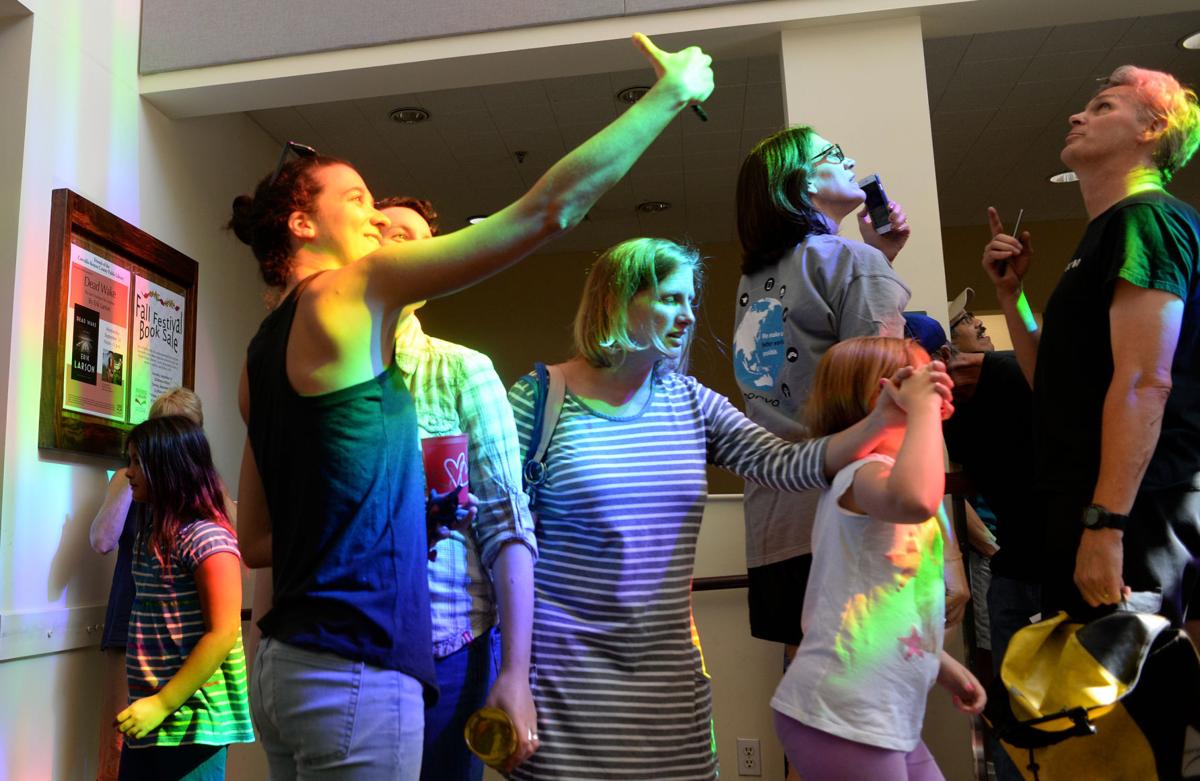 People gather under the rainbow. 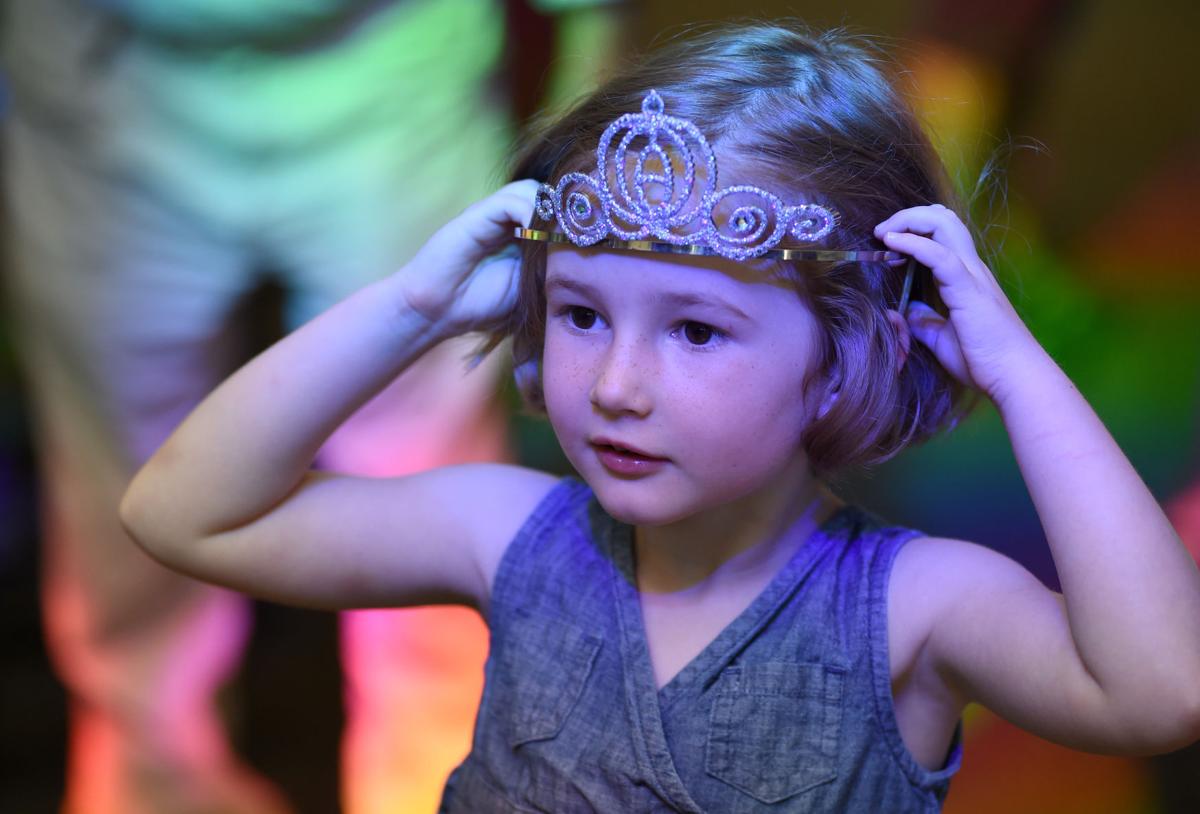 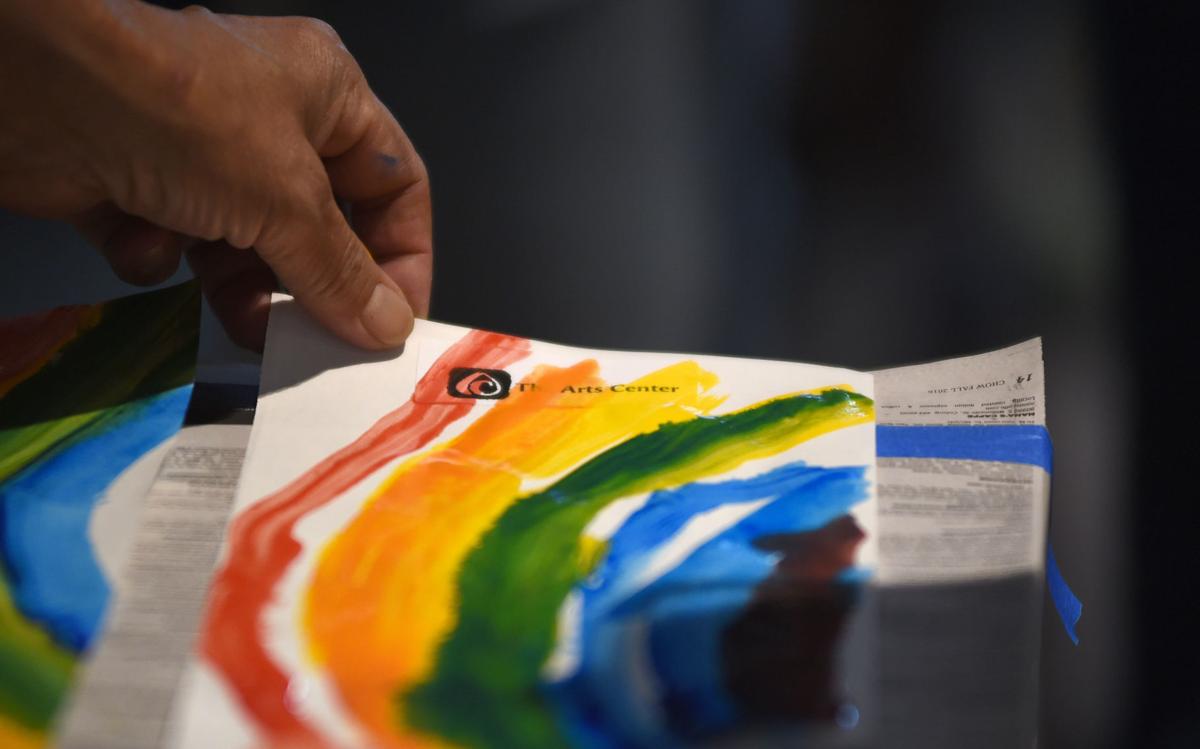 People visit the "Three Secrets of the Sun" art installation. 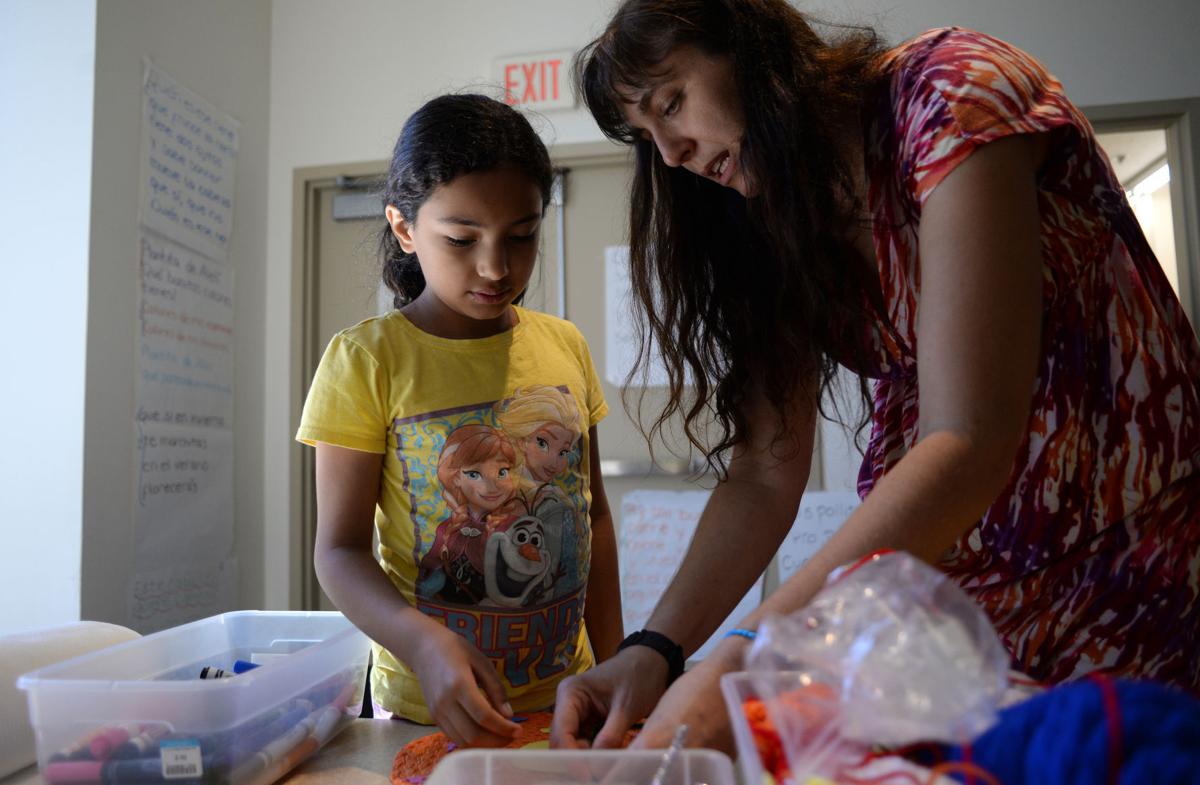 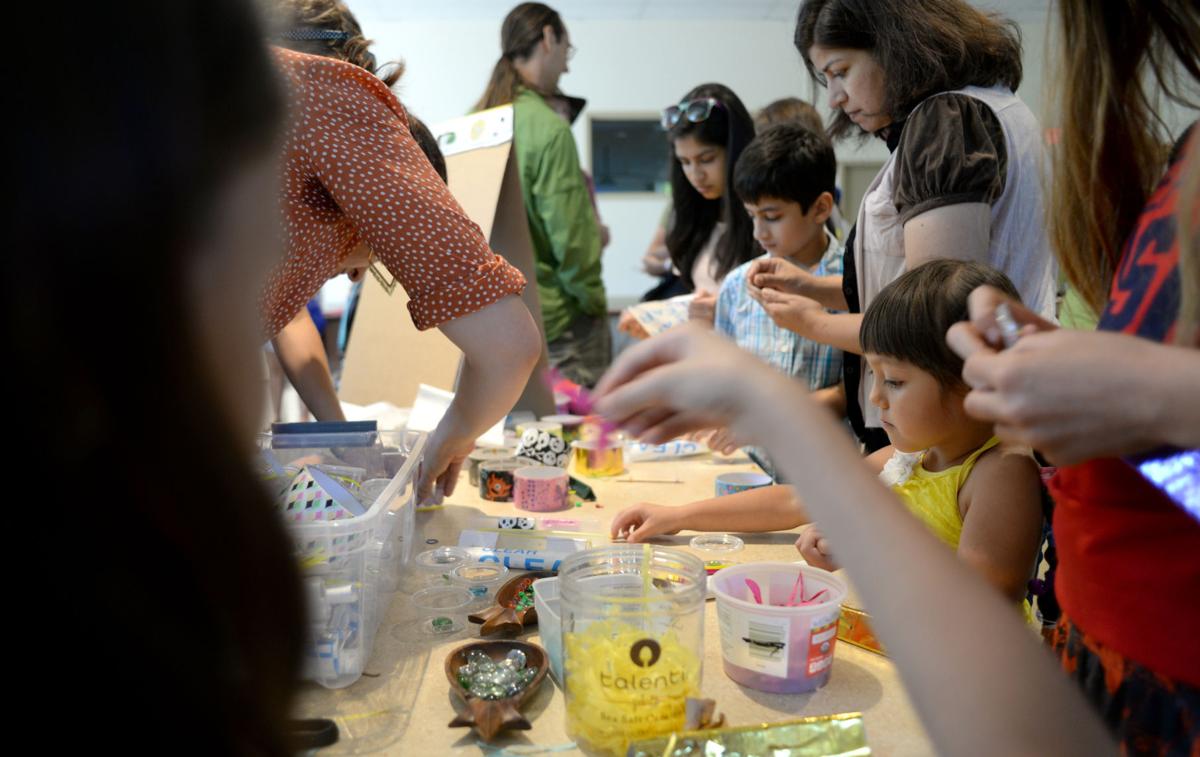 Children craft a kaleidoscope during the "Three Secrets of the Sun" art installation. 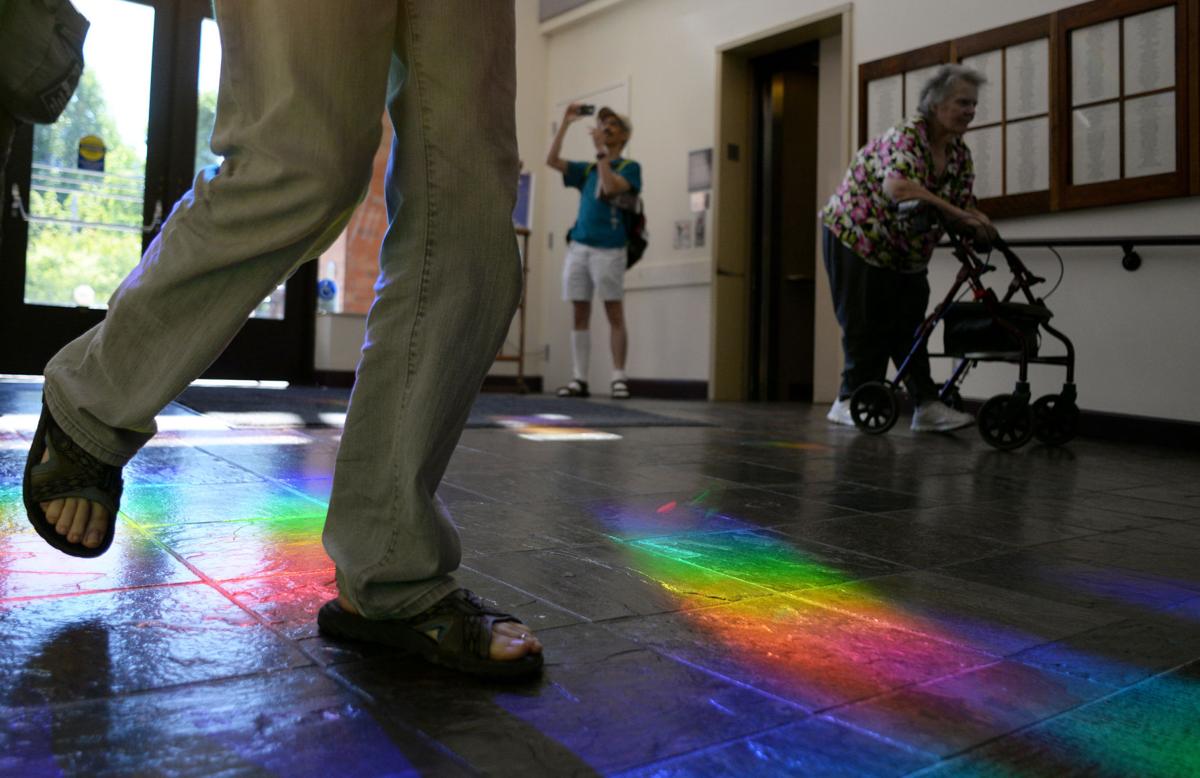 More than 100 people attended Saturday's unveiling of the "Three Secrets of the Sun" art installation at the Corvallis-Benton County Library.

More than 100 people cheered Saturday afternoon as they were basked in all the colors of the rainbow during the unveiling of a new art installation at the Corvallis-Benton County Public Library.

The solar-powered display, courtesy of Corvallis artist Peter Erskine, uses prisms to project moving rainbows onto the library’s foyer and to remind all who walk through the entranceway of the power of the sun. Erskine, whose art installations have been seen by millions in Rome and Berlin, is known as Solar Spectrum Environmental Artwork.

While many admired the beauty and the light on display Saturday, Erskine hopes the project will raise awareness of climate change.

“Rainbows are always beyond reach and here, with my art, I make a place where people can step right into a rainbow,” he said. “Many cultures regard rainbows as symbols of hope. This is my symbol of hope at a time of catastrophe.”

According to Erskine, many people don’t consider the impact they could have on climate change and the environment in which they live.

“Climate change is a slow-motion catastrophe. It’s scary and people can’t really emotionally deal with that kind of unprecedented event,” he said. “But the rainbow is so beautiful that it allows people to stop and keep their minds open. I want to use that emotional impact of the art to wake people up and get through the fear of climate change through hope.”

Library Director Carolyn Rawles said she was excited at the idea of everyone coming through the library getting to walk through a rainbow.

“He’s done these all over the world and they’ve been loved everywhere so we’re really fortunate that he was interested in putting one here,” Rawles said.

Erskine has estimated the project will have a lifespan of three to five years.

In conjunction with the celebration of the unveiling, several local environmental groups hosted educational activities related to climate change Saturday at the main meeting room of the library. The activities included arts and crafts projects for kids, music and booths from the Corvallis Sustainability Coalition, 350 Corvallis, Seeds for the Sol, the Corvallis Environmental Center, The Arts Center, La Escuelita and the OSU Pride Center.

Larry Weymouth of climate change group 350 Corvallis, said the art installation provided a unique opportunity to educate people in a place of learning who were already interested and passionate about the subject of climate change.

“The main for visiting the library is to expand their knowledge and this form of art allows them another opportunity to learn,” Weymouth said. “Every one of these groups is emphasizing Peter’s main point that everything is connected to the sun. For eons, the Sun has bathed the Earth in life-giving light. And because of 200 years of burning of fossil fuels, the atmosphere has been upset of those benefits.”

Corvallis 350 member Charlie Miller said Saturday also provided the groups with a rare chance to speak to a younger demographic.

“A lot of the people we’ve talked to don’t yet have gray hair, which isn’t typical of the meetings we usually have,” Miller said with a laugh. “It’s great to see younger people interested in learning about climate change and the environment. It’s phenomenally important for all of us. They are the future and they need to understand what we’re facing.”

For more photos from this event, see the online version of this story at www.gazettetimes.com.

COVID-19 infections are rising in Oregon, putting two-thirds of all counties, including Linn County, into what is for now the highest possible…

Artist Peter Erskine addresses the more than 100 people gathered inside the Corvallis-Benton County Library for the unveiling of his art installation.

Abigail Collins, center, has her picture taken under the rainbow cast from the "Three Secrets of the Sun" art piece.

People gather under the rainbow.

People visit the "Three Secrets of the Sun" art installation.

Children craft a kaleidoscope during the "Three Secrets of the Sun" art installation.

More than 100 people attended Saturday's unveiling of the "Three Secrets of the Sun" art installation at the Corvallis-Benton County Library.