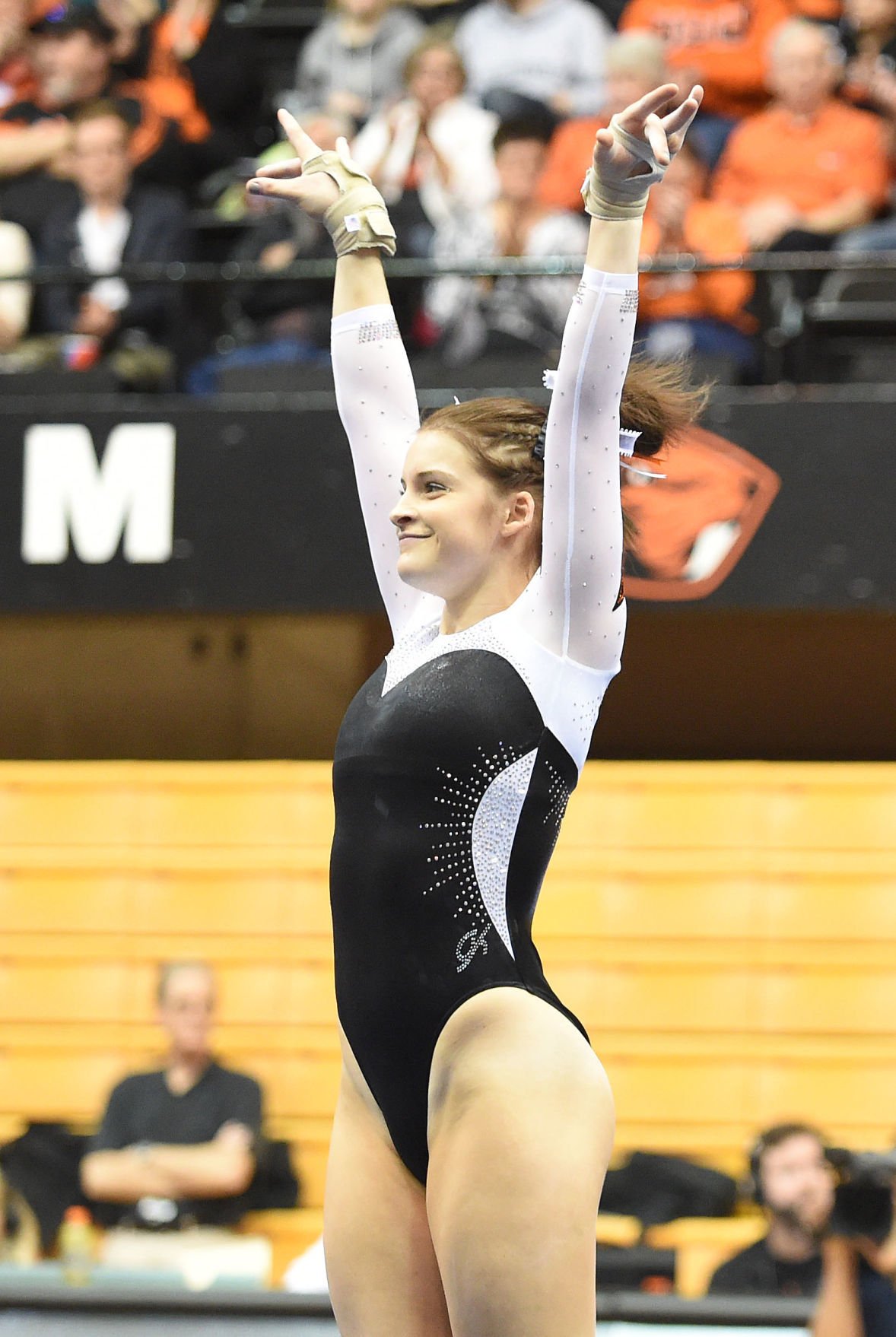 Former Oregon State gymnast Taylor Ricci, shown here competing at a 2016 meet, continues to promote the Dam Worth It campaign on Twitter with hashtags like #DamWorthIt and #EndTheStigma. 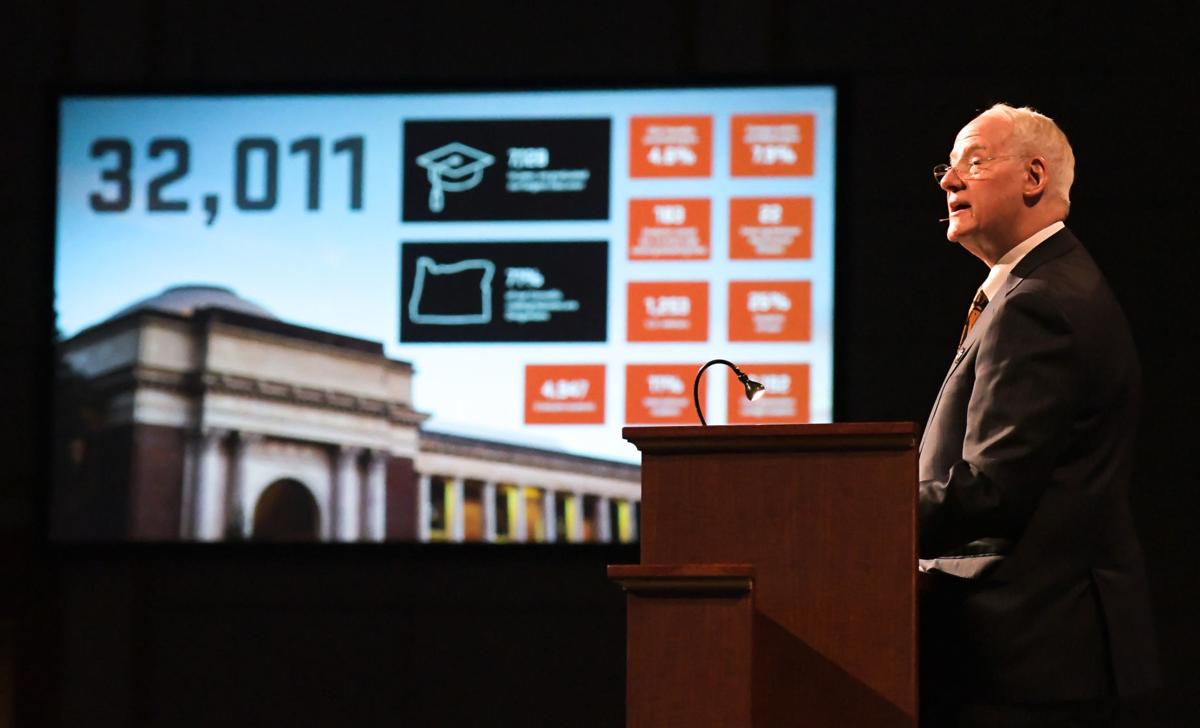 Oregon State University President Ed Ray called for action to address student mental health issues during his State of OSU address at the Oregon Convention Center in Portland in February. 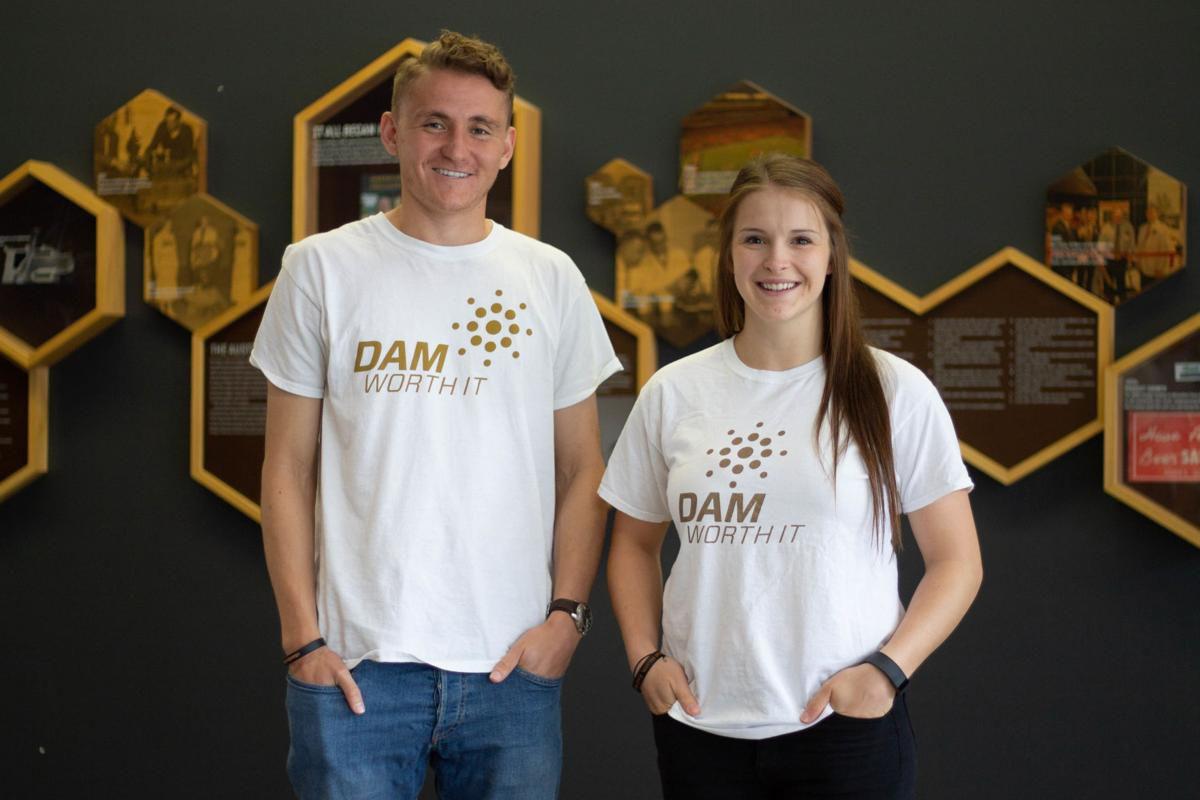 Oregon State University student-athletes Nathan Braaten and Taylor Ricci, shown here in a 2018 photo from OSU’s student newspaper, The Baro, launched the Dam Worth It suicide prevention campaign after each lost a teammate to suicide.

“We found him,” said Nathan Braaten, an Oregon State University athlete who discovered the lifeless body of a soccer teammate.

“I thought I knew what pain felt like, but to be there and to be so close to it was a whole different experience.”

His friend and teammate John Chambers had killed himself.

The shock came on top of a good friend’s tragic death six months earlier. Braaten began isolating himself. His teammates noticed. So did his mother, who suggested he get professional help.

So he did. And it made a difference as he began opening up to a therapist. That’s why he wants to help other student-athletes do the same when they’re depressed or suicidal.

“It’s tough as an athlete. You don’t want to look weak or look vulnerable,” said Braaten.

Through counseling and life experience, however, Braaten began to talk about what happened, and how it affected him.

“I’ve found that being vulnerable is not a weakness but a strength,” he said.

Braaten and former Oregon State gymnast Taylor Ricci shared their stories dealing with mental health in short documentaries for Dam Worth It, a campaign the two started in January 2018 to help end the stigma surrounding mental health and athletes.

Their efforts have drawn national attention, but also picked up some fans closer to home, including OSU President Ed Ray, who made mental health a significant part of his “State of the University” address in February.

“The scourge of suicide on our college campuses is a national health crisis,” said Ray. “We are working to enhance a culture of caring. Improving student wellness is among the university’s priorities because we know that student success is founded in student wellness.”

Ray illustrated how an initiative like this is crucial for today’s world.

“The fastest-growing area of concern among my colleagues is the mental health of young people,” said Ray. “In a survey we did two years ago, 25 percent of the students who responded said they have experienced some degree of anxiety.”

Ray went on to single out Braaten and Ricci for their efforts in spreading awareness of the crisis surrounding mental health.

“A lot of student-athletes are dealing with mental health challenges, and they are not seeking the help they could get if they would reach out,” said Ray in an interview after the speech. “Taylor and Nathan started Dam Worth It on campus to encourage these student-athletes to come forward if they need help and that there are people there to help them.”

‘It was breaking me’

Ricci was diagnosed with alopecia areata, a disease that causes extreme hair loss, during her career as a gymnast at OSU. What was once known to her as a sign of beauty was lost.

“It was a lot of moments where it was just me,” said Ricci. “Those are filled with tears and emotions you don’t want to feel. It was breaking me, and I didn’t want to show I was struggling.”

Shortly after her diagnosis, Ricci learned that a teammate had taken her own life. She described it as one of the darkest days of her life.

But in this moment of darkness she was inspired by one of her coaches.

“He told me that I am someone who is going to heal by doing something about this: ‘This is bigger than yourself, and you can help a lot of people. That’s how you work,’” Ricci remembers. “He knew me better in that moment than I did.”

It was these experiences that inspired Braaten and Ricci to start Dam Worth It and to travel around the country speaking to students about their mission and how to help.

“We’ve been lucky to impact a lot of people,” said Ricci.

One of the core values the campaign has is the concept of peer-to-peer connections—athletes coming together to talk with each other about their struggles. Ricci and Braaten believe this can truly help athletes deal with their mental health.

Many of them share similar kinds of stress, starting with their challenging schedule:

Wake up at five.

Study before the rest of the day’s classes.

Practice for two hours at night.

Do homework before bed.

Repeat five or six days of the week.

This is what daily life can look like for collegiate athletes. The time, energy and commitment it takes to play sports in college is extremely rigorous. College-level classes alone are meant to challenge you and push you academically, but to combine that with the intense schedule of competing in college athletics at a high level only makes it more difficult.

That may be why mental health is a rising issue in college athletics. According to the National Collegiate Athletics Association’s 2015 GOALS study, college campuses have seen an increase in the number of student-athletes dealing with mental health challenges.

In Forest Grove, Pacific University senior football player Kevin McGee has faced many struggles, starting with injuries that caused him to miss considerable amounts of playing time. A knee injury sidelined him the first half of this season.

“I was worried I wouldn’t be able to play the same,” said McGee. “It’s hard, feeling like you should be somewhere but you can’t. You don’t want to let your team down.”

McGee also dealt with school and personal struggles on the Forest Grove campus. As a physics major he faces a rigorous academic schedule. During his sophomore year, he was often isolated, leaving him with thoughts of his father, who died when McGee was young.

“I had a lot of time alone,” said McGee. “It made me think about my dad and how he couldn’t be there for me. It made me miss him.”

McGee credits the Pacific University Counseling Center for helping through his struggles. He had previously been to counseling when he was younger, after losing his father, and that experience made him comfortable seeking help at Pacific.

He wants more students to take advantage of the counseling center as a resource.

But access to Pacific’s center depends on the diagnosis. While students with high-risk symptoms, such as severe depression or suicidal thoughts, are seen by counselors immediately, students with lower-risk issues sometimes have to wait as long as a month or two, depending on the time of year, with counselor requests peaking in late fall and early spring.

So what other options do they have?

Not many, especially at smaller schools such as Pacific, where athletic trainers do not get training for dealing with athletes’ mental health issues.

“Absolutely none,” said Pacific’s head athletic trainer, Eric Pitkanen. “We only have to take one basic sports psychology class that doesn’t deal with any of the real issues we see.”

Pitkanen is very aware of mental health issues facing young people. After marrying a therapist, his view of what was normal behavior among the athletes he worked with shifted.

“Mental health is an underrepresented part of the job,” said Pitkanen. “If athletes aren’t right in their head, they won’t be right on the field.”

Pitkanen also recognizes that he and his staff aren’t well-equipped to handle this issue, even with his background. That’s why he has brought in a sports psychologist to meet with Pacific athletes.

The visits currently happen once a week for three hours, and the psychologist can meet with only three to four athletes each time. However, Pitkanen was elated with how beneficial it has been for the athletes in need.

This is not available everywhere, though.

Pitkanen isn’t aware of any other Division III school that has enlisted such a service. Based on McGee’s experience, there’s a need.

The football player, who was comfortable seeking traditional counseling, was generally happy with the services on campus. But he said athletes face particular pressures.

Pitkanen said the NCAA is late to the party when it comes to mental health care. It was only recently that the organization created a list of best practices for universities.

With student-led groups like OSU’s Dam Worth It and innovative approaches like Pacific’s sports psychologist leading the charge, athletes could soon have a variety of options for mental health care.

And that will be key to their performance—on the field and in life, Pitkanen said: “It is crucial we look beyond the physical with student athletes.”

Aidan Lannom is the sports editor of The Pacific Index, the student publication of Pacific University, which is part of the Breaking the Silence media collaboration on the topic of suicides in Oregon. Read more stories at www.BreakingTheSilenceOR.com.

A 32-year-old man faces multiple charges in an incident involving injuries to a child.

Former Oregon State gymnast Taylor Ricci, shown here competing at a 2016 meet, continues to promote the Dam Worth It campaign on Twitter with hashtags like #DamWorthIt and #EndTheStigma.

Oregon State University President Ed Ray called for action to address student mental health issues during his State of OSU address at the Oregon Convention Center in Portland in February.

Oregon State University student-athletes Nathan Braaten and Taylor Ricci, shown here in a 2018 photo from OSU’s student newspaper, The Baro, launched the Dam Worth It suicide prevention campaign after each lost a teammate to suicide.