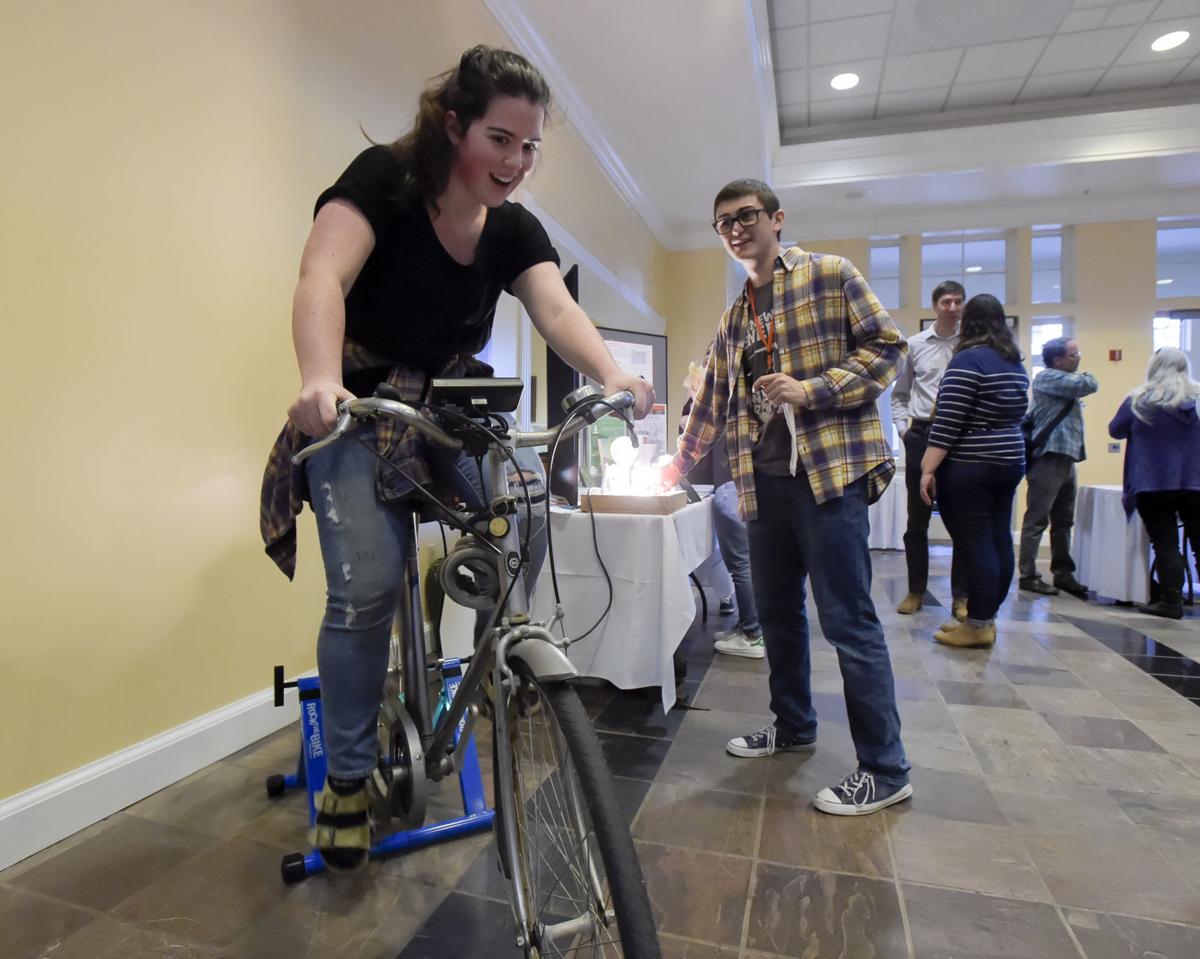 Nicole Bohall, 20, a junior at Oregon State University pedals a bicycle that powered a group of light bulbs under the guidance of Jack Woods at the OSU Sustainability Office booth at the Corvallis Sustainability Coalition Fair and Town Hall on Monday. It took five times as much pedaling to light an incandescent as it did an LED. 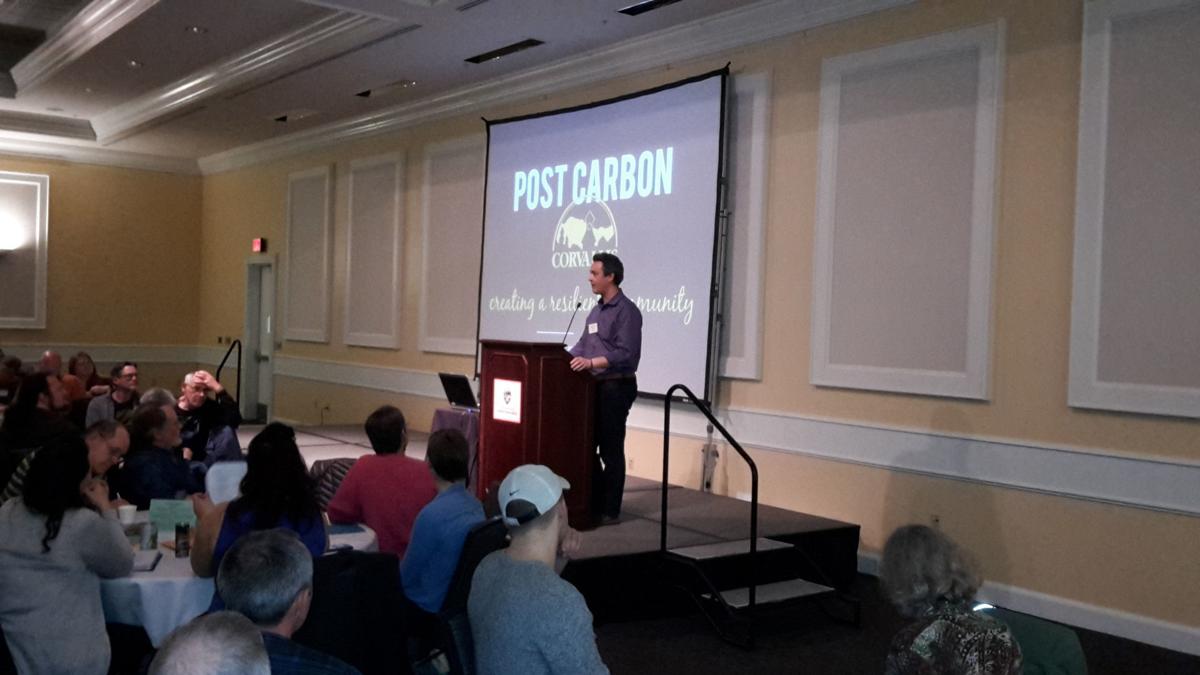 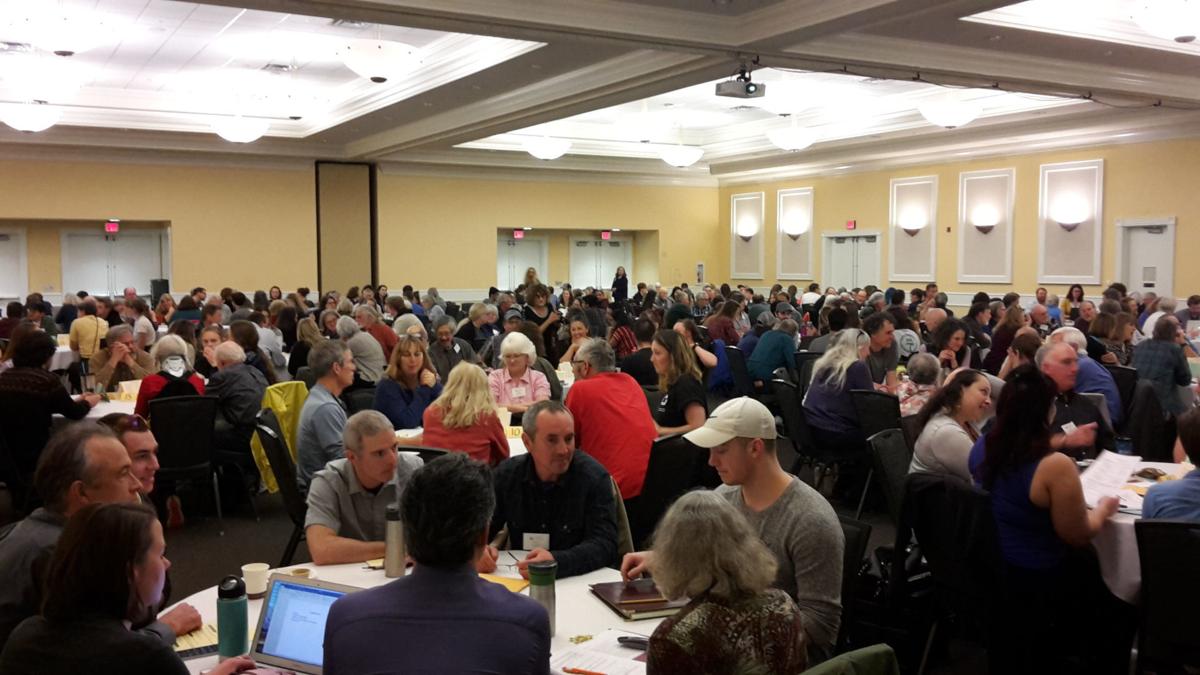 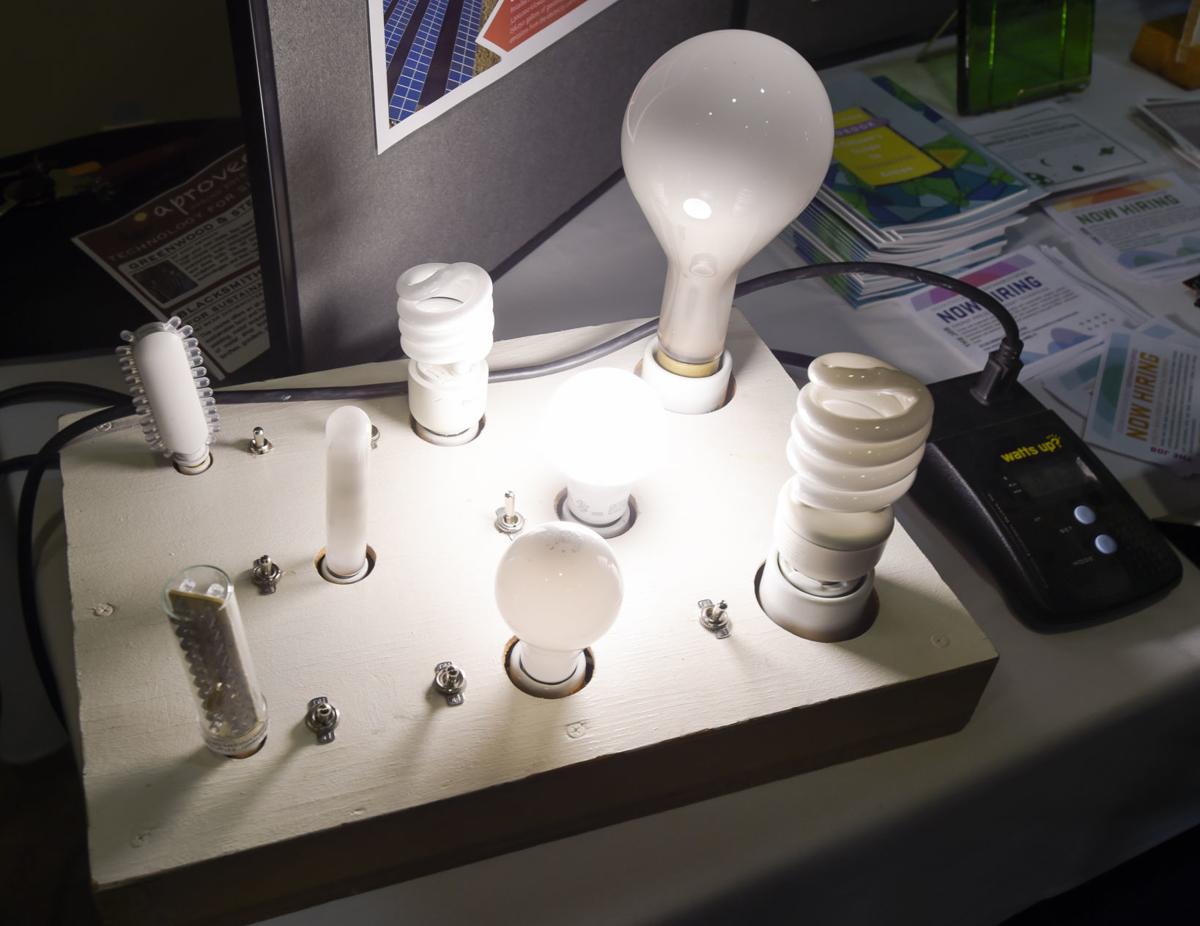 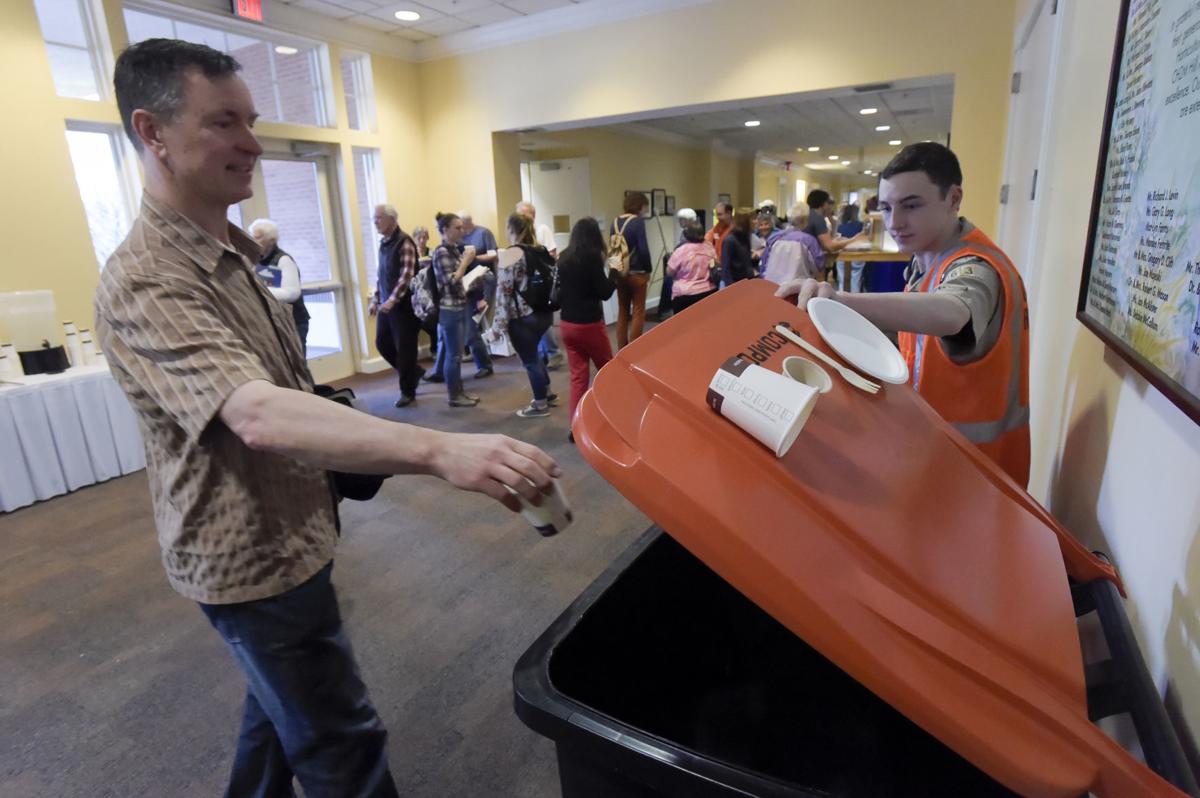 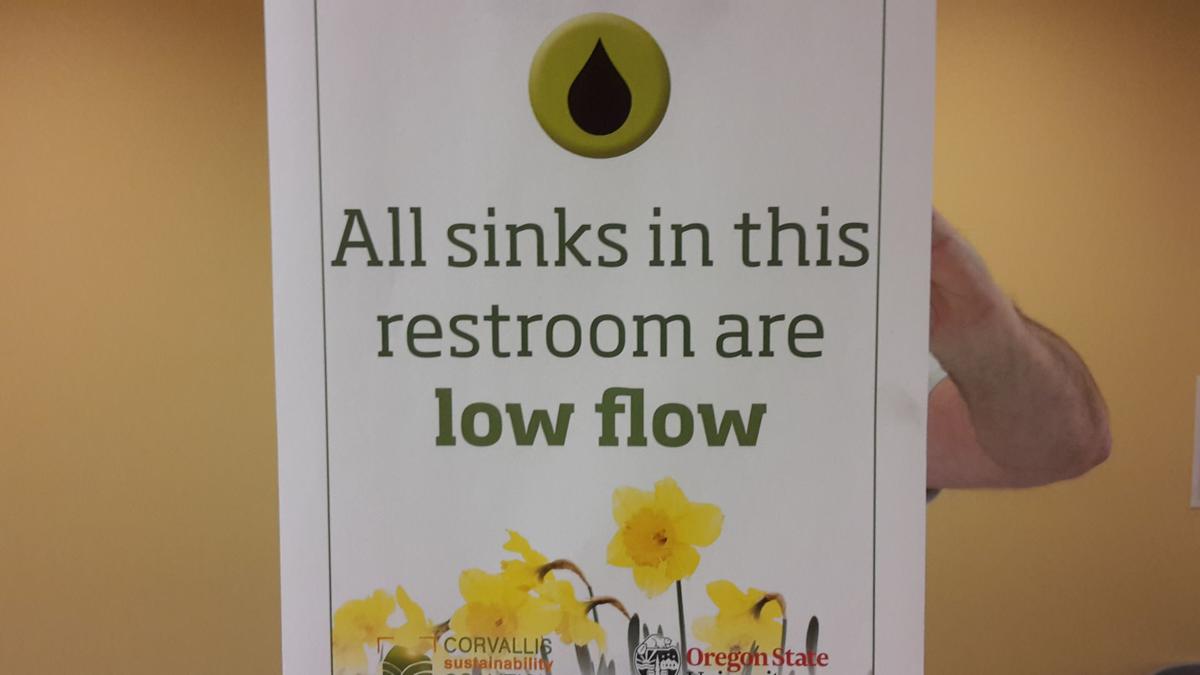 Climate change was the theme Monday night as the Corvallis Sustainability Coalition held its 10th fair and town hall at the CH2M Hill Alumni Center.

Nearly 300 people gathered to stroll through the exhibits, engage in table discussions of climate mitigation and adaptation and hear keynote speaker Asher Miller of the Post Carbon Institute talk about creating a resilient community in the face of climate change challenges.

Participants even got to “vote” on possible ways to implement climate action solutions in Corvallis.

Miller, the Post Carbon Institute executive director, moved to Corvallis from Santa Rosa last June when the institute relocated to Corvallis. Miller also is serving on the city’s Climate Action Advisory Board, while facilitator Annette Mills of the Corvallis Sustainability Coalition is providing project management services to the board.

Miller, who spoke for just more than half an hour, told the audience that Corvallis “is not a post carbon or resilient community quite yet, but don’t feel bad … no other community is there yet either.”

“We have a really big task ahead of us,” Miller continued. “Sometimes I look at things and say ‘this is too hard.’ But we don’t have a choice. It’s inevitable that we are going to have to transition away from fossil fuels. But are we going to do it mindfully or will we do it kicking and screaming?”

Miller showed an aerial photograph of his former town, Santa Rosa, which was devastated by fires last October. Miller noted that Sonoma County is known for having solid sustainability practices, yet after the fire, ordinances were enacted that streamlined the permit process, making it easier for folks to rebuild … in the fire zone.

“That upsets me,” Miller said. “People in a moment of crisis just want to get back to what is normal. But it’s not about bouncing back to normal when normal is no longer an option.”

Miller cited three takeaways on addressing climate change in Corvallis. First, he recommended tackling mitigation and adaptation at the same time. Second, he encouraged thinking in systems. And, third, he urged residents to work on getting to the root causes.

Miller also offered three implementation ideas as “conversation starters”: a locally owned and operated clean energy utility; a Corvallis food forest initiative that would use as much open space as possible, even parking strips, for local food production; and a carbon-free Corvallis first tariff “because we are going to need to put a price on carbon and incentivize the right kind of consumption.”

Participants at the 35 tables then were given electronic clickers to vote on possible climate change approaches. There were two clickers per table, which meant folks had to collaborate and look for consensus.

Voters fielded three questions, each of which had three possible answers. Here is how the balloting went:

Question 1: What is the most effective way to do outreach that will energize organizations?

Question 2: How should Corvallis look to fund implementation of its climate action plan?

Question 3: As Corvallis sequences its climate change solution what should be done first?

Nicole Bohall, 20, a junior at Oregon State University pedals a bicycle that powered a group of light bulbs under the guidance of Jack Woods at the OSU Sustainability Office booth at the Corvallis Sustainability Coalition Fair and Town Hall on Monday. It took five times as much pedaling to light an incandescent as it did an LED.