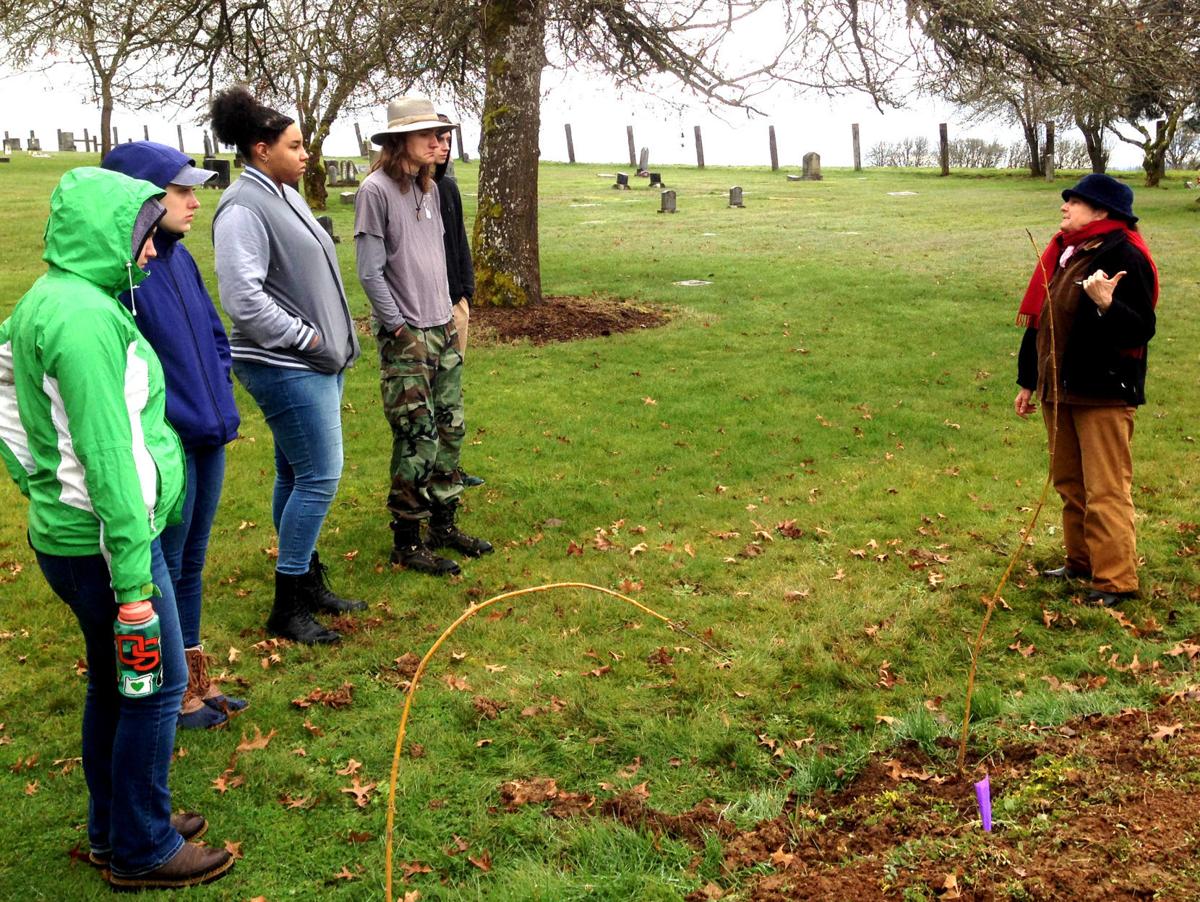 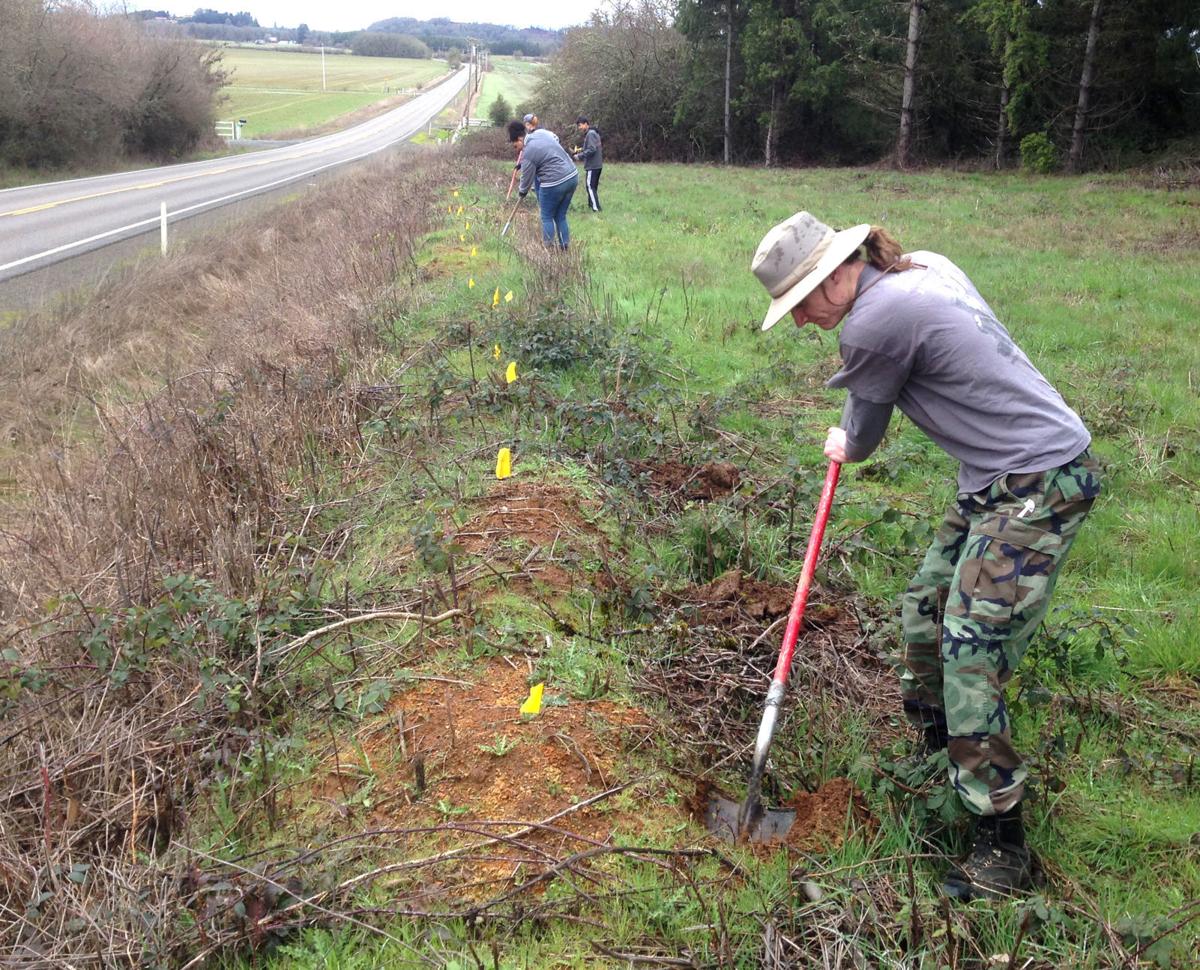 For a place dedicated to honoring the dead, Rest Lawn Memorial Park has a guiding vision that is surprisingly focused on life.

Cynthia Beal, associate director of the Sustainable Cemetery Studies Lab at Oregon State University, brought groups of students to the cemetery, which is south of Monroe on the Territorial Highway, this weekend for service learning projects in their soil science classes.

Beal, a soil science faculty member, told the students that even parks and green spaces sometimes get developed as time goes by.

“The cemetery is the only permanent land use we have,” she said.

Beal, who bought the cemetery in 2014 to serve as a laboratory for sustainable cemetery research, said her vision for cemeteries is to make them natural habitats that can help preserve native species. At Rest Lawn, a 13-acre site with graves dating back to the 1800s, her plan is to develop about seven acres of land on the site that was formerly used to grow Christmas trees into a more mature forest with natural burial plots mixed into the trees.

“You can repurpose existing cemeteries as natural cemeteries,” she said.

Beal brings groups of students out each term to help with projects to sculpt the cemetery into a more natural environment, doing things like thinning trees, removing dead branches, removing invasive species, building berms from compost and planting native species.

Some students in forestry or soil science have done longer term projects at the site, but the groups this weekend were there meeting service learning requirements in soil science classes open to non-majors as a way to meet core degree requirements. The students spent time planting willow trees and clearing invasive blackberries.

“The nice thing about a cemetery is you’ve got a lot of time to work,” Beal said.

Beal, who owns the Natural Burial Company, which makes biodegradable wood caskets, said she bought the cemetery because it was hard to find one  willing to try converting to a more deliberate natural landscape or serving as a laboratory for developing more sustainable cemetery practices.

According to Beal, the cemetery gradually will expand into the more forested area, but it already offers natural burial. She said that means burial in a biodegradable container at a shallow enough depth to allow for full decomposition, without embalming or with minimum embalming. For people who don’t like the idea of taking up land for a grave, she said, the new sites will allow them to feel like they are essentially renting space for a tree.

Beal said there is interest in natural burial but many people don’t even realize it’s legal to bury someone without embalming or a concrete vault or that many cemeteries are already allowing natural burial.

Beal said at Rest Lawn there probably wouldn’t be space for each person to have a tree of their own, but maybe families could have a tree at the center of their plots.

Cal Winney, a third-year student in mechanical engineering, said he was inspired to choose the service project at the cemetery because his family does maintenance at a family pioneer graveyard in Harlan every Memorial Day.

“This project just felt familiar to me in terms of taking care of a graveyard,” he said.

Winney said he liked the idea of a natural burial because it doesn’t introduce chemicals into the groundwater.

Erica Baldwin, a senior in business who was in the same soil science class as Winney, said she chose the project because she doesn’t mind working outside.

She said her biggest lesson was that sustainability takes serious planning.

“It’s not something you think about for a day and do in a day,” Baldwin said.

Baldwin added that natural burial is probably the direction that cemeteries should be going.

“There’s a stigma around it and there shouldn’t be anymore, she said.

“I want to become a willow tree,” she said.