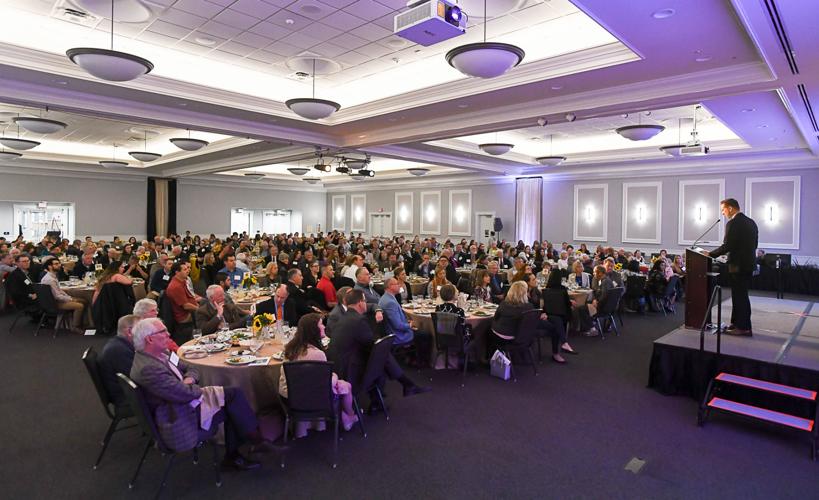 Chris Quaka, president and CEO of the Benton Community Foundation, addresses the crowd of more than 300 people at the CH2M Hill Alumni Center at Friday's first philanthropy achievement awards luncheon. 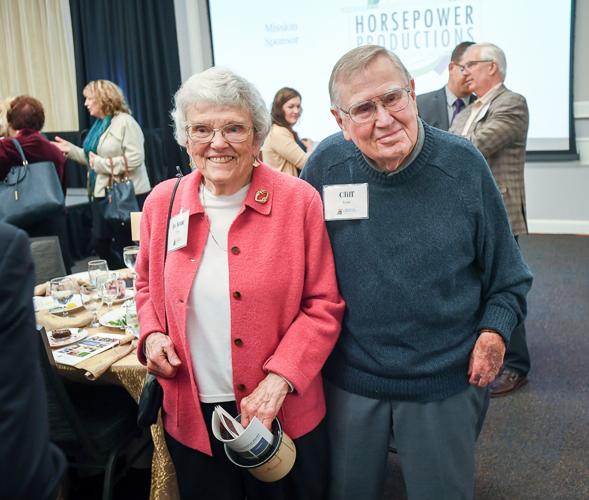 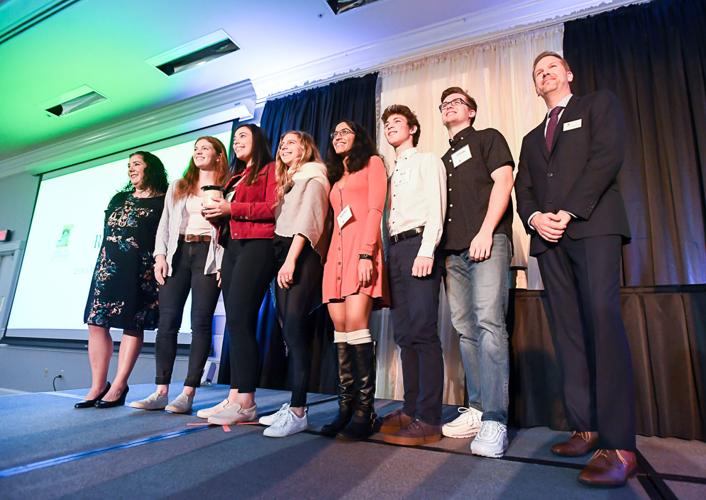 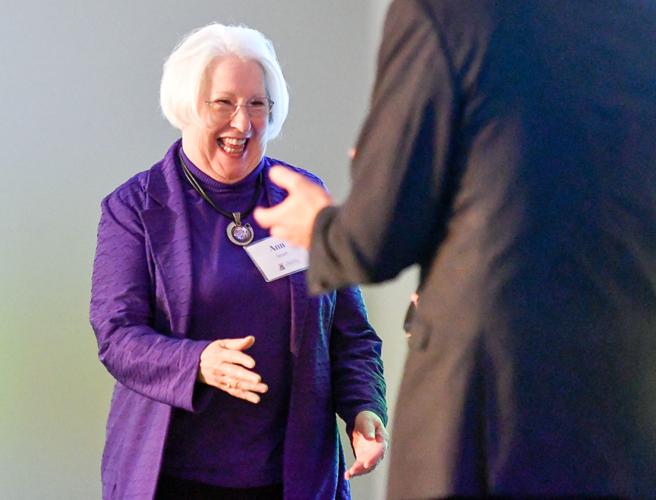 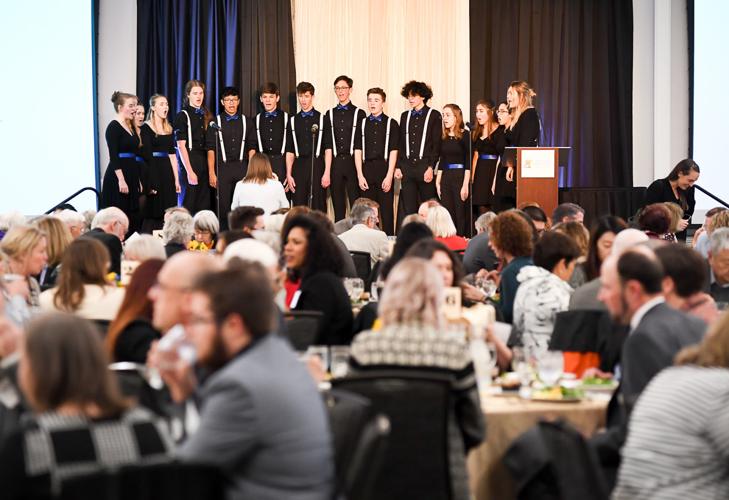 Buckets. That was the theme as the Benton Community Foundation presented its first philanthropy achievement awards at a Friday luncheon at the CH2M Hill Alumni Center.

From opening remarks by foundation board president Ilene Kleinsorge to comments by honoree Ken Johnson to a closing speech by Julie Manning … buckets were everywhere. And the metaphor worked.

Kleinsorge noted the series of “bucket books” by Carol McCloud, and added “When you fill someone else’s bucket, you fill your own, too.”

Johnson, a retired dentist who was one of two individuals honored for volunteer fundraising for his work making the new teen center happen at the Boys & Girls Club of Corvallis, said, ”I’ll put my little drop of water in the bucket, and if we all do that it’s going to fill up.”

Manning, a former Corvallis mayor who is on the foundation board, brought back the bucket metaphor during comments on how giving fosters community.

On National Philanthropy Day — the scheduling was intentional — the foundation gave out nine awards in seven categories in a lively one-hour program.

Cliff Trow and Jo Anne Trow shared the outstanding philanthropic achievement award for their five decades serving Benton County, the state of Oregon, Oregon State University and a slew of nonprofits. Tom McLennan of the OSU Foundation called them “standard-bearers” in video remarks on the award.

Jo Anne: “We’ve tried to do our part. I’m surprised and humbled to be recognized in this way.”

Cliff: “It means a lot to us that there are people out there recognizing the importance of what happens in the community.”

The Trows drew the strongest applause from the crowd of more than 300. A close second was the Raider Royalty students of Crescent Valley, who won for their work as emerging philanthropists.

Six members of the group were honored on stage: Reed Vega, Anusha Vasudevan, Elliott Nichols, Elizabeth Hodgert, Tais Vega and Sierra Braaten. A seventh member, Sophie Leid, looked ahead a bit in video remarks in which she said “it will be really interesting to see what everybody does” in the future.

• Ann Smart, outstanding volunteer fundraiser: Smart was selected for her work with the Zonta Club, Stone Soup, the First Christian Church and the new downtown Benton County Historical Society museum. “There are a lot of things I care about,” Smart said.

• Benton Habitat for Humanity, outstanding innovative project or program: Habitat was selected for its home repair operation, which has provided essential fixes for 80 families, with the focus on low-income, disabled, elderly and veteran homeowners.

"The work that we are able to do by pooling our resources and working together is pretty remarkable," said Lorie Bailey of the coalition.

CSC facilitator Annette Mills, meanwhile, noted the amount of "passion, time and energy" that people put in for coalition projects. "There is nothing more impactful for us to work on than the sustainability and resilience of the community," Mills added.

• Kate Caldwell, outstanding fundraising professional: The development manager with the Old Mill Center for Children Families has raised funds with the center’s annual auction as well as for the Boys & Girls Club. “I don’t think that this is an award for me,” she said. “It’s an award for the agency and all of the volunteers who do the work.”

• Samaritan Health Services, outstanding philanthropic business: Samaritan provided $450,000 in social accountability grants, donated another $128,000 in event partnerships and its employees turned in buckets of volunteer hours, 95,000. CEO Doug Boysen noted that community partnerships are one of the key pillars for Samaritan and he thanked the foundation because “it’s important to highlight the good work that people are doing.”

Watch Now: Disney caught in the middle of political firestorm over Florida law

Chris Quaka, president and CEO of the Benton Community Foundation, addresses the crowd of more than 300 people at the CH2M Hill Alumni Center at Friday's first philanthropy achievement awards luncheon.