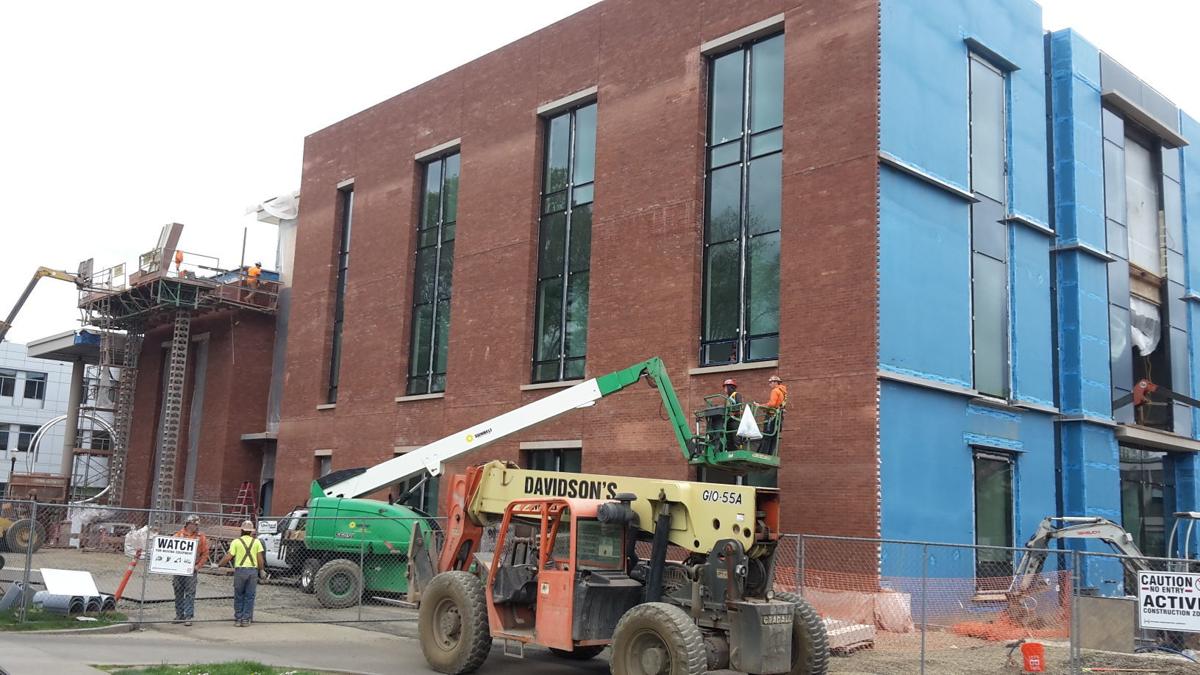 Construction crews work Tuesday on the new Johnson Hall engineering building that is scheduled to open this fall. The 58,000-square-foot building is going up on top of a parking lot at the north end of campus. The city and OSU executed an interim development agreement that mandates that OSU replace parking that is lost to development. The Johnson Hall project, however, started before the agreement was finalized. 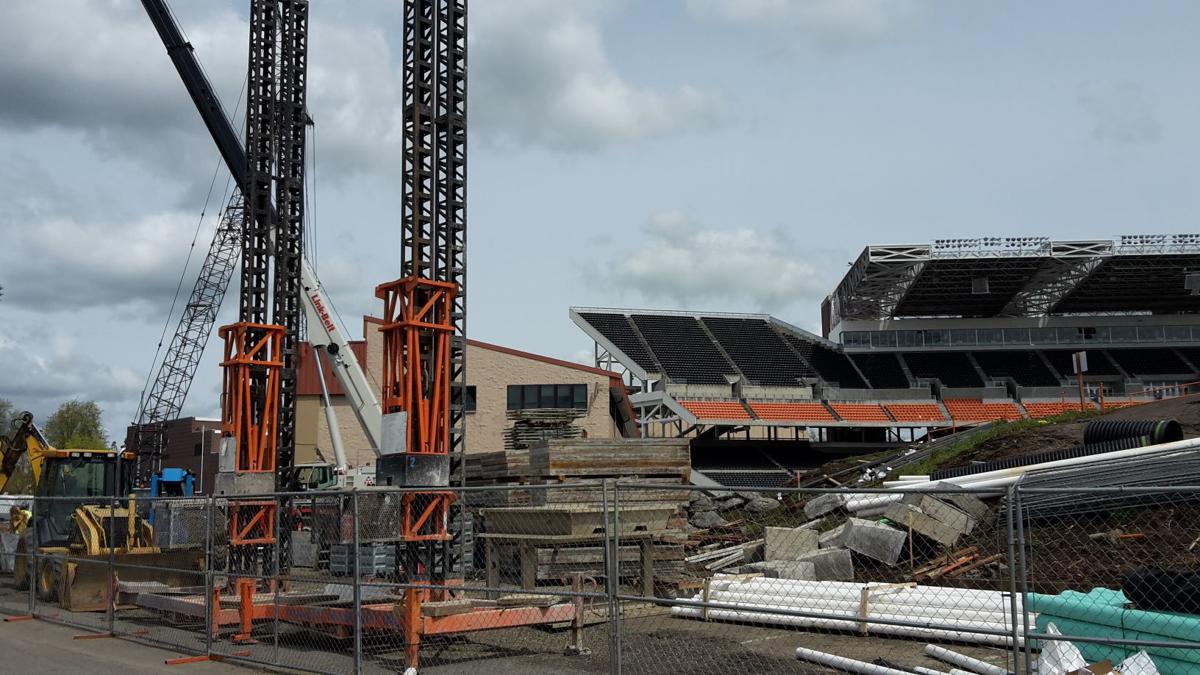 Construction crews work Friday on the remodeling of the Valley Football Center. City officials and the university reached an agreement on how parking spaces lost by the addition would be replaced, thus allowing the project to go forward. 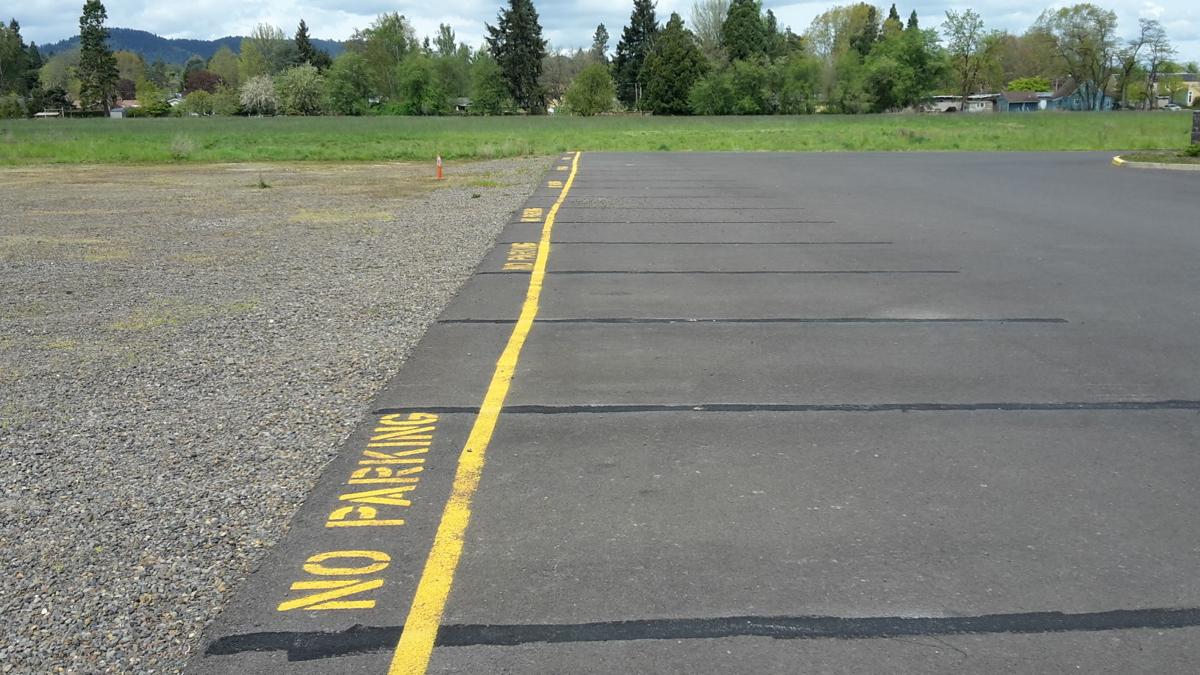 The gravel patch at left is planned to hold Oregon State University's new agricultural maintenance depot on Campus Way just west of 35th Street. At the project's first hearing before the City Council the "temporary" parking spaces that had been removed became a key part of the debate. The council is scheduled to take action on a new parking plan at its Monday meeting.

It’s been a head-spinning couple of weeks for relations between the city of Corvallis and Oregon State University.

Deals signed, dazed confusion in the Planning Commission, an infusion of OSU cash to assist with livability issues and, of course, another land-use decision that involves parking.

Here is a look at the recent events:

April 4: The Corvallis City Council approves a new memorandum of understanding between the city and OSU. The long-awaited document — its previous iteration expired Dec. 31, 2014 — is designed to help guide city-OSU relations for an indefinite period. (A copy of the document is posted with this story at www.gazettetimes.com.)

April 5: OSU sends a letter to the Planning Commission, which is considering the comprehensive plan amendments required to review the university’s next district plan. The document leads many in the community to believe that the university does not intend to submit such a plan.

April 6: The Planning Commission resumes a public hearing which started March 16 and hears from OSU officials. Commissioners choose to hold the record open an additional week. Deliberations are set for Wednesday.

April 11: Corvallis Police Chief Jon Sassaman and OSU officials unveil a $2.45 million plan to attack livability issues in near-campus neighborhoods. The university will pay $800,000 over four years for two new on-campus Oregon State Police troopers and $1.2 million for years two, three and four of a projected three additional city livability officers. The city will spend $450,000 for year one of the plan, which will raise its livability corps to six officers.

April 13: OSU sends a second letter to the Planning Commission (see the website for both letters), apologizing for the confusion its first letter caused and pledging to work with the city on planning efforts.

This coming Monday, the City Council is scheduled to review OSU’s plans for a new agricultural maintenance center. A council discussion March 7 led to a postponement because the two sides could not agree on how much parking would be required by an interim development agreement approved in April of 2015.

Here’s a deeper look at four of the recent town and gown issues:

The memorandum of understanding calls for the formation of a Joint Advisory Committee.

The committee is scheduled to meet at least twice a year and is charged with recommending a “two-year set of priority initiatives, action plans … and anticipated measureable actions.”

Meetings of the committee are not going to be open to the public, and that’s triggered criticism.

Former Planning Commission members Kirk Bailey, Tony Howell and Jennifer Gervais published a guest opinion column April 12 in the Gazette-Times which said that “even if these meetings pass muster with the letter of the law, they definitely don’t meet the ‘open and transparent’ government expectations of Corvallis citizens.”

Jack Orchard, a partner at Ball Janik in Portland who also represents the Oregon Newspaper Publishers Association, noted that “the group (is) a public body for whom its members function as a governing body, making it subject to the Public Meetings Law requirements.”

Clark and OSU President Ed Ray both told the Gazette-Times that they are open to public meetings, but Corvallis officials are holding the line.

“I think that OSU leaders and city leaders need to talk regularly. Conversations don’t require open meetings,” said York in remarks that were echoed by Traber and Shepard.

Ward 4 Councilor Barbara Bull, who is not on the committee, however, disagreed.

“The MOU provides an open door and process to address essential matters,” Clark said. “Think of it as a ‘key’ to keeping the vehicle of collaboration running. The important work will be done by the city, the university and community partners talking and work together.”

OSU was scheduled to forward its new planning document, renamed the University District Plan, to the city for approval by the end of 2015. That didn’t happen because the city appointed a task force to look at updating the city code because of the enrollment, housing and parking changes that weren’t anticipated in the previous plan, which took effect in 2005.

The task force met 15 times and the Planning Commission was grinding away at a lengthy list of comp plan amendments when the university’s April 5 letter — and testimony from Clark and campus planner David Dodson — threw a wrench into the gears.

“The city would provide the single, comprehensive set of regulations, mitigation measures, procedures and monitoring requirements for the OSU campus,” the letter said.

When asked what had happened to the district plan’s lengthy schedule of meetings, community outreach and city oversight that had been publicly announced, Dodson replied, “At one time that was the strategy. That has changed.”

More change was coming. Clark and Adams, whose signatures are on both letters, noted in the April 13 version that the confusion at the Planning Commission was a “case of problematic semantics, misunderstanding or incomplete communication.”

“The university’s bottom line,” said Clark in an interview with the Gazette-Times, “is that OSU will fully follow the city of Corvallis’ comprehensive plan and zoning processes, and if the city requests that Oregon State provide a master plan or provide a major plan amendment along with a complementary master plan, OSU will do so.”

The Planning Commission deliberates Wednesday, with City Council review required after that.

In July 2013 the Corvallis City Council voted 7-2 to “charge” OSU for an additional police officer to work the neighborhoods. A month later, after a city leadership meeting with Clark and Ray that Ward 9 Councilor Brauner called “intense and productive,” councilors voted 8-0 not to charge OSU.

Fast forward to April 11 and Clark, Sassaman and Cole were announcing a plan in which OSU will spend $1.2 million to pay for three police officers and another $800,000 for State Police troopers.

Clark emphasized that the university was “not paying directly” for the officers and that the money represented a “grant” that the city could use as it wished.

But the intent was clear. Both the city, which is adding $450,000 into the pot, and OSU think more work has to be done in the neighborhoods, particularly on “high-incident” days such as Halloween.

The city and OSU are working together on an ambitious strategy that includes crackdowns on parties, but it also tackles the sexual violence that sometimes stems from binge drinking and even notes a possible state ban on the sale of high-octane Everclear and limiting large beer purchases.

“There are a lot of very high impact proposals, more than we can accomplish in a year,” Cole told a meeting of the Community Relations Advisory Group, which is continuing the livability work of the collaboration.

The city and OSU passed an interim development agreement in April 2015 that mandates replacement of parking lost to development. A key symbol of the tension was Johnson Hall, a massive engineering building that is under construction on top of what once was a parking lot at the north end of campus.

The development agreement was fueled by city frustration that parking in near-campus neighborhoods was jammed while OSU built huge buildings on parking lots.

The city and OSU used the agreement to work together on the parking lost via the Valley Football Center remodeling, and the agreement also is in play with the agricultural repair depot on Campus Way. The university installed 24 “temporary” parking spaces on ground where tractors are scheduled to rumble into the depot.

The city said those spaces must be replaced. The new deal, which the council will review Monday, calls for OSU to restore 14 of those 24 spaces, add 10 more spaces elsewhere and nine more to serve the depot.

“This is a wonderful community and we are all committed to making smart decisions going forward,” Ray said when asked to sum up the current state of city-OSU relations. “We owe a great debt of gratitude to the individuals and groups that have helped us to create a common agenda. I doubt that there are many places with such collaborative agreements in place.”

“I think it is important that the city and OSU continue to keep in mind that we need to work together if we want to be successful,” Shepard said. “We need to communicate clearly with each other. That can build trust.”

Construction crews work Tuesday on the new Johnson Hall engineering building that is scheduled to open this fall. The 58,000-square-foot building is going up on top of a parking lot at the north end of campus. The city and OSU executed an interim development agreement that mandates that OSU replace parking that is lost to development. The Johnson Hall project, however, started before the agreement was finalized.

Construction crews work Friday on the remodeling of the Valley Football Center. City officials and the university reached an agreement on how parking spaces lost by the addition would be replaced, thus allowing the project to go forward.

The gravel patch at left is planned to hold Oregon State University's new agricultural maintenance depot on Campus Way just west of 35th Street. At the project's first hearing before the City Council the "temporary" parking spaces that had been removed became a key part of the debate. The council is scheduled to take action on a new parking plan at its Monday meeting.