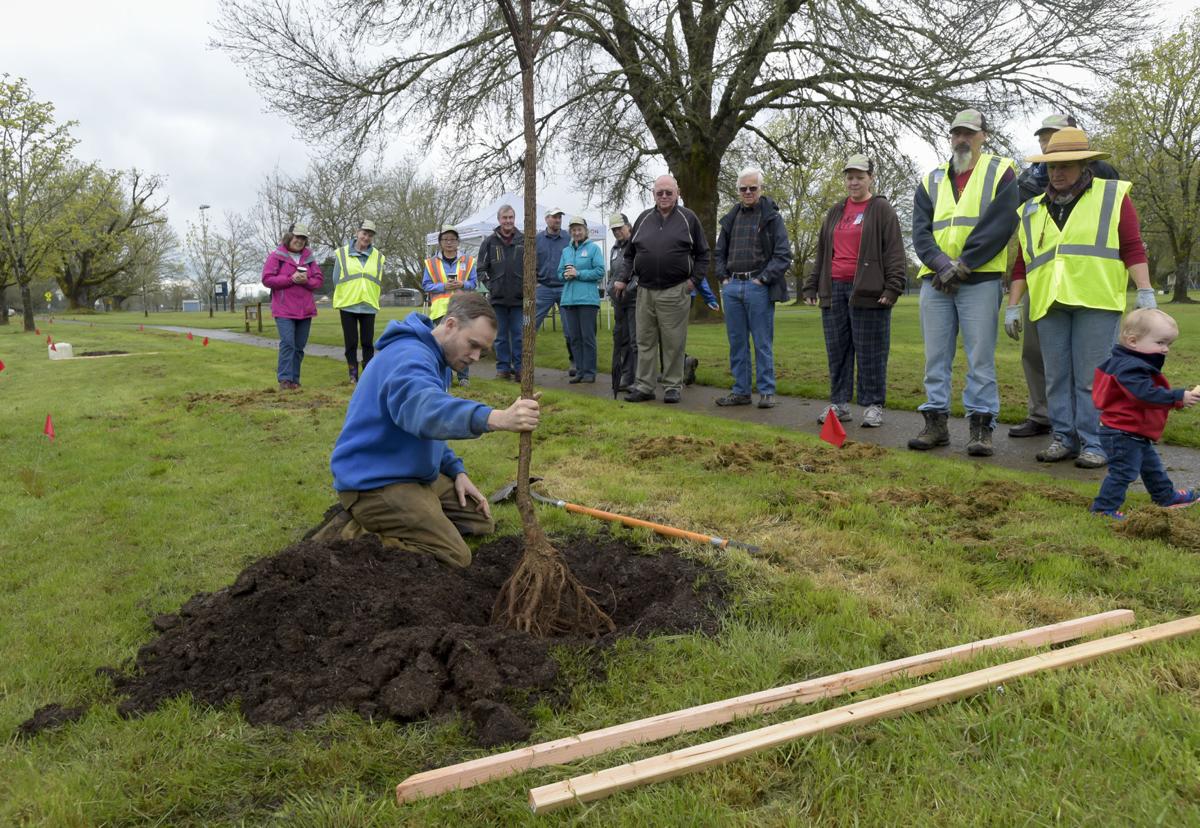 Corvallis urban forester Jonathan Pywell works with a cobblestone oak during a tree planting demonstration held at Village Green Park on Friday for Arbor Week. Friday's planting wrapped up a busy week for Pywell, who was surprised on Monday with a statewide award. 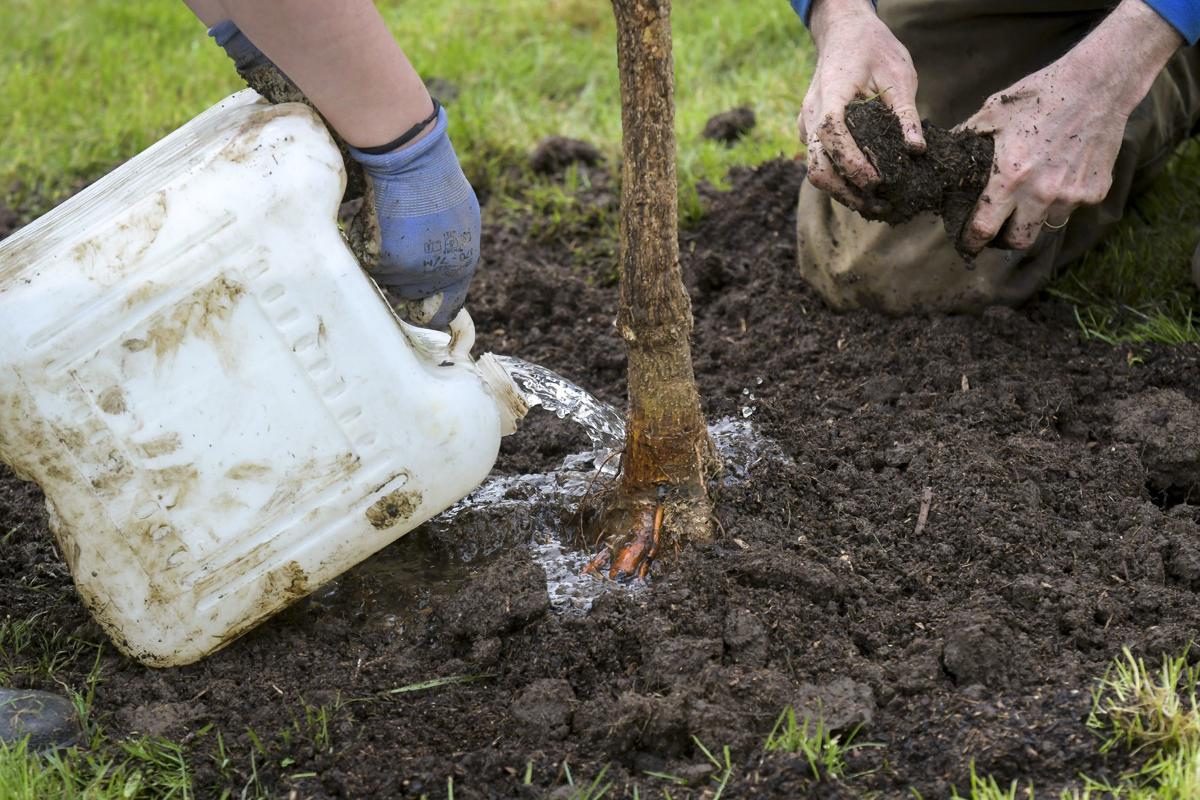 A just-planted cobblestone oak tree gets a drink of water Friday during a tree planting event at Village Green Park for Arbor Week. 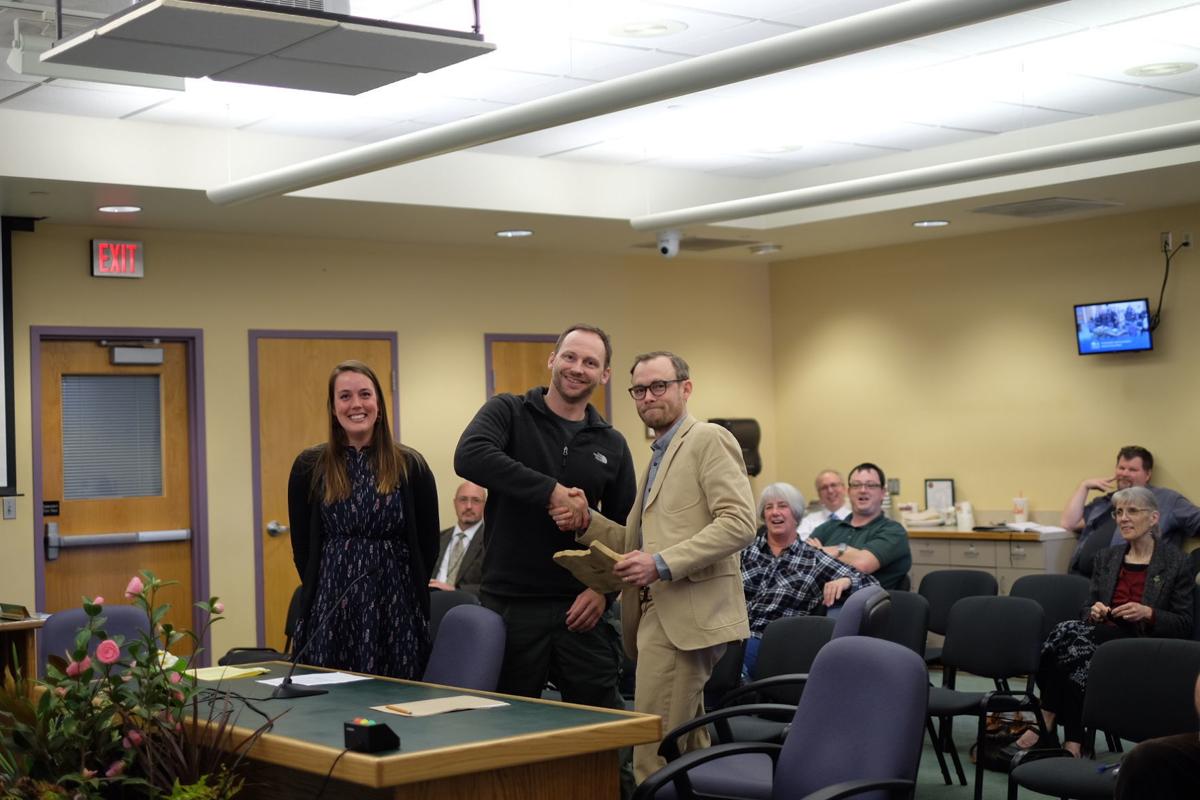 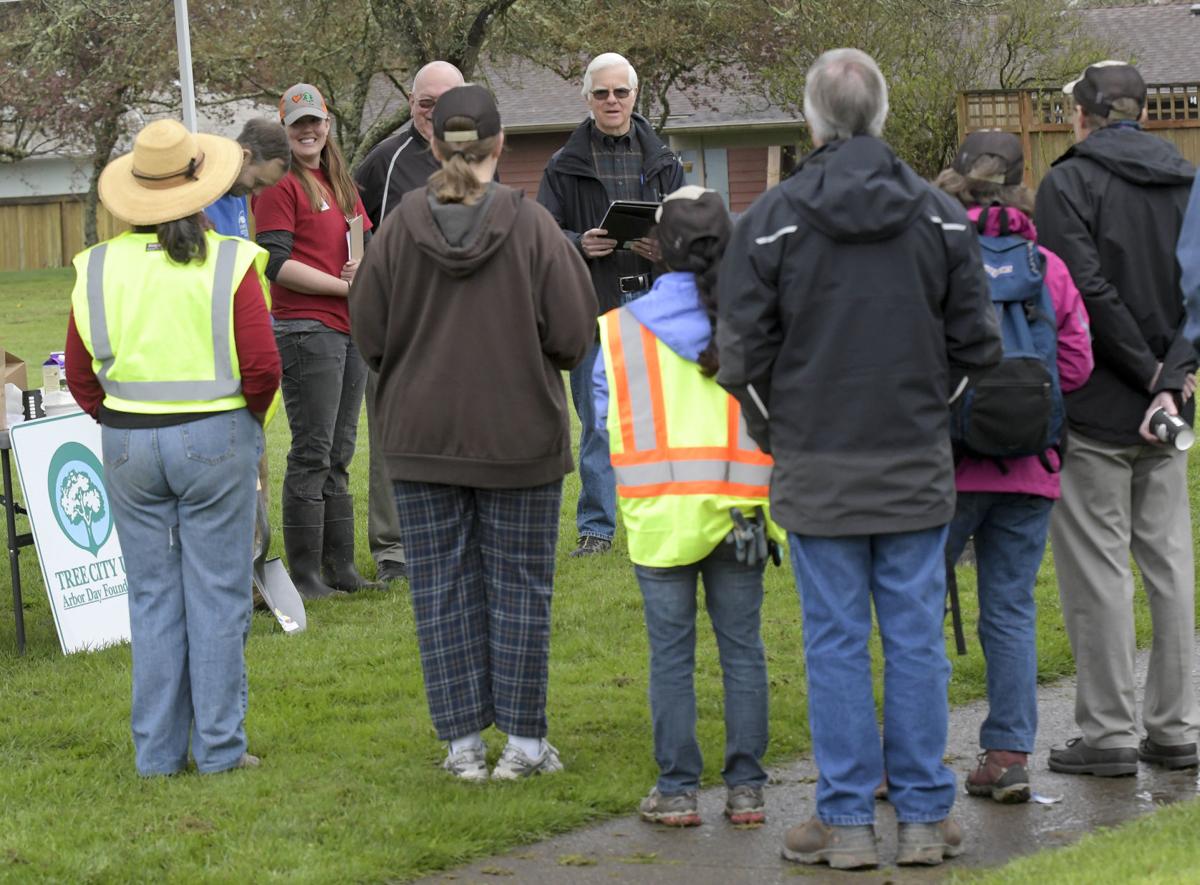 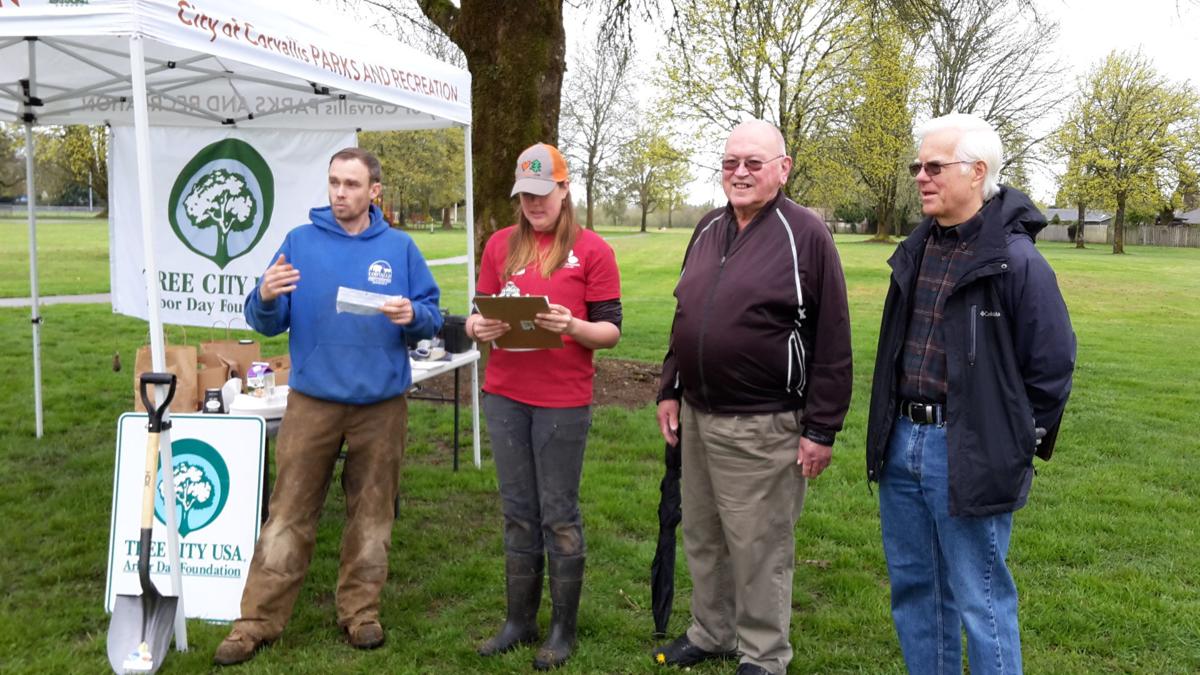 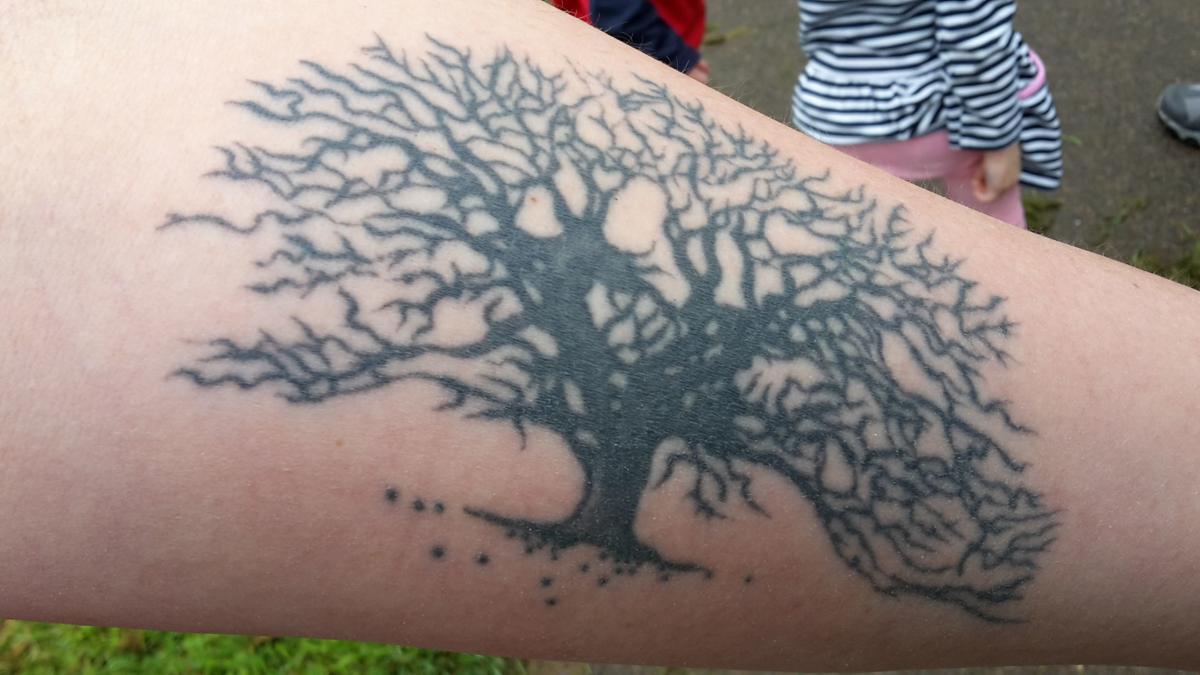 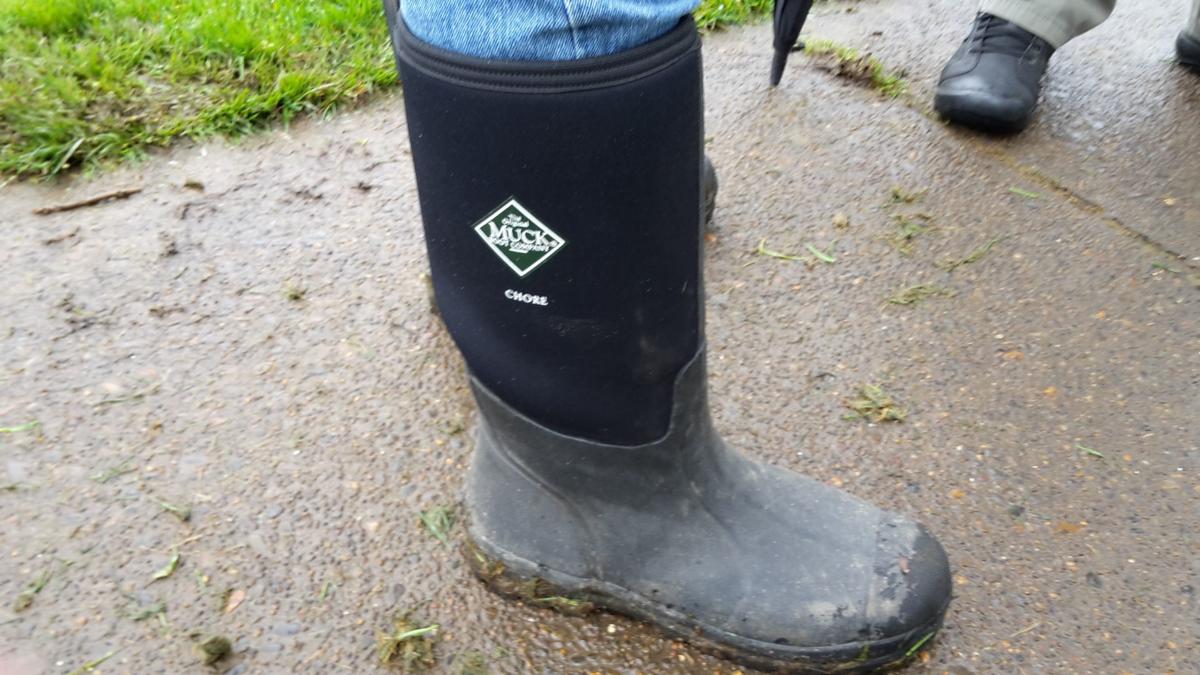 Trees are such a big deal in Corvallis that Arbor Day has been turned into Arbor Week.

And on Friday, the Parks and Recreation Department was out in force at Village Green Park for a tree planting involving members of the new volunteer corps of tree stewards. Pywell, despite tendinitis in his right arm, was knee deep in the mulch, teaching the stewards the proper way to plant a cobblestone oak.

The event also featured plantings of a bald cypress and a Persian parrotia, with Pywell noting his mantra of “picking the right tree for the location. Don’t plant the tree that you like. Plant the best tree for your spot.”

“This city values its trees,” said Mayor Biff Traber, who read a proclamation that noted that “trees are the most senior residents of Corvallis.”

Traber also grabbed a shovel and teamed up with Ward 9 Councilor Hal Brauner on planting a second cobblestone oak in the parking strip. Brauner, who is retiring at the end of this year after 18 years on the council, noted that the urban forestry program was approved by the council during his first term and that Corvallis has been on the Tree City USA list ever since.

Urban forestry outreach specialist Jennifer Killian, who has an oak tattoo on her left forearm, introduced her tree stewards, a dozen of whom were on hand wearing matching ball caps. The volunteers have gone through orientation and pruning training and will be deployed this summer, planting trees and assisting with watering.

“This is something we have been trying to do for a long time,” said Pywell, who began working for the city in the fall of 2014. “We were hoping for 10 people and we wound up with 31. They will free up (arborist) John Hinkle and I for more complicated things, and they will be an extra set of eyes out there in the field. And they will help with the watering, too, and that’s a real labor-intensive job in the summer.”

Oregon Community Trees surprised Pywell by presenting him with the President’s Award at Monday’s council meeting (Pywell thought he had been invited for the Tree City ceremony).

Eric DeBord, Oregon Community Trees president and arborist for the city of Eugene, praised Pywell and his group for their street pruning, the thinning project to preserve oak woodland in the Chip Ross natural area and a recent partnership in which removed street trees were processed by local mills, with the city getting a share of the lumber proceeds.

“Another example is a tree-failure database Pywell was instrumental in developing,” DeBord said. “The database helps foresters all over the Pacific Northwest understand how urban trees fail here. It’s work that exemplifies the broad range of Pywell’s accomplishments in advancing urban forestry.”

“It’s a huge honor,” Pywell said. “It makes me happy we were recognized for the work we are doing. I was completely surprised. I had no idea. Evidently I work with people who are very good at keeping secrets from me.”

Here is a look at key 2017 numbers by the urban forestry unit with the Corvallis Parks and Recreation Department:

What comes next in NY's investigation of Trump

Corvallis urban forester Jonathan Pywell works with a cobblestone oak during a tree planting demonstration held at Village Green Park on Friday for Arbor Week. Friday's planting wrapped up a busy week for Pywell, who was surprised on Monday with a statewide award.

A just-planted cobblestone oak tree gets a drink of water Friday during a tree planting event at Village Green Park for Arbor Week.