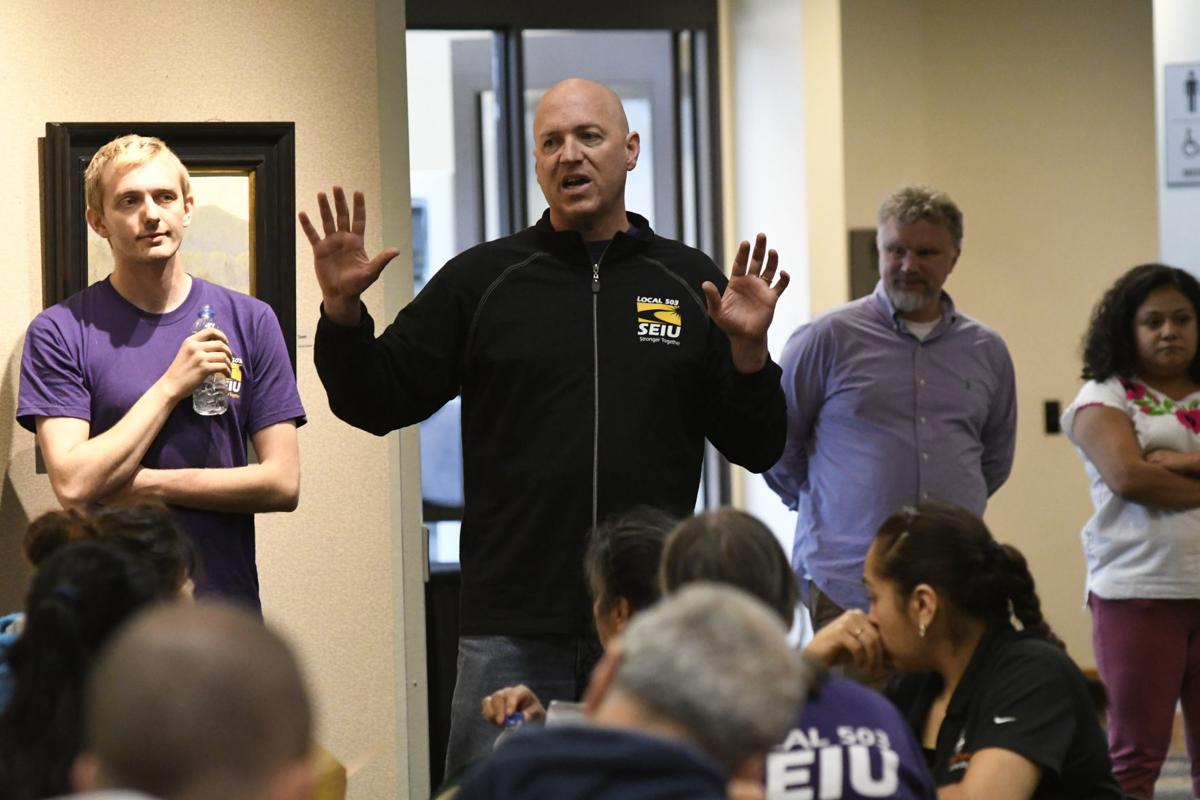 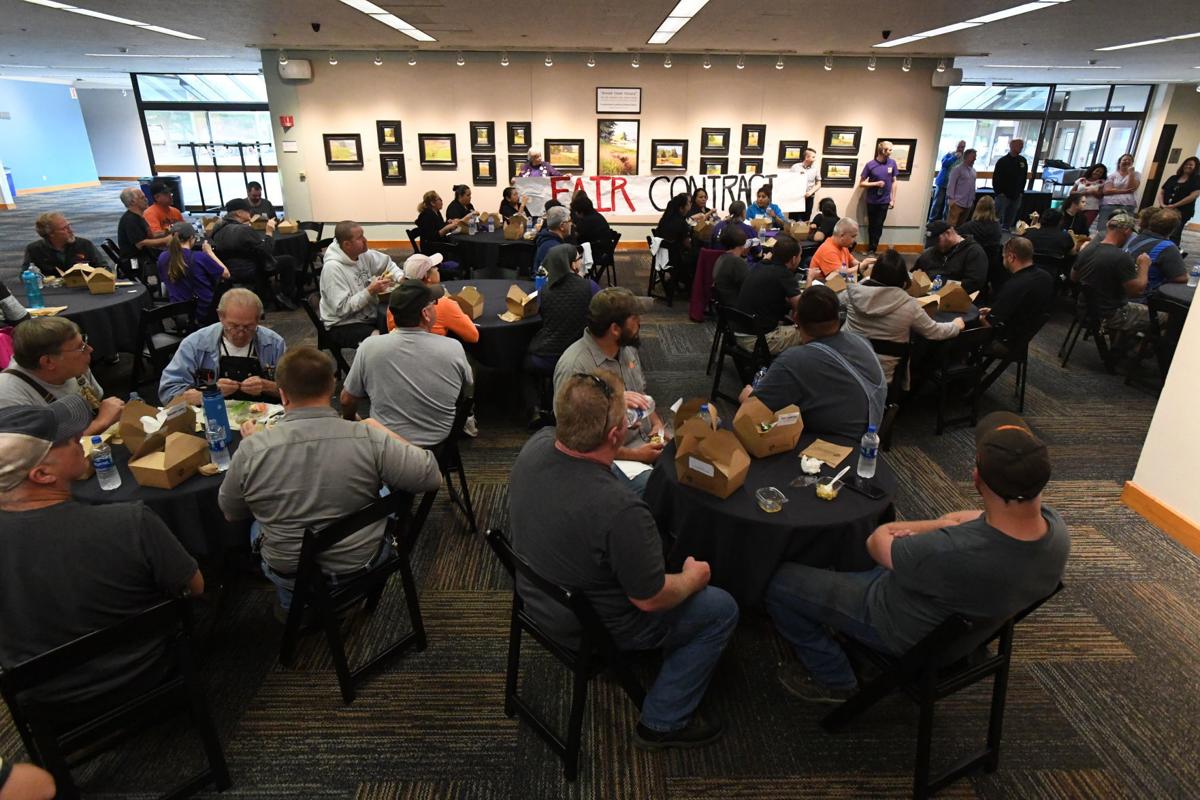 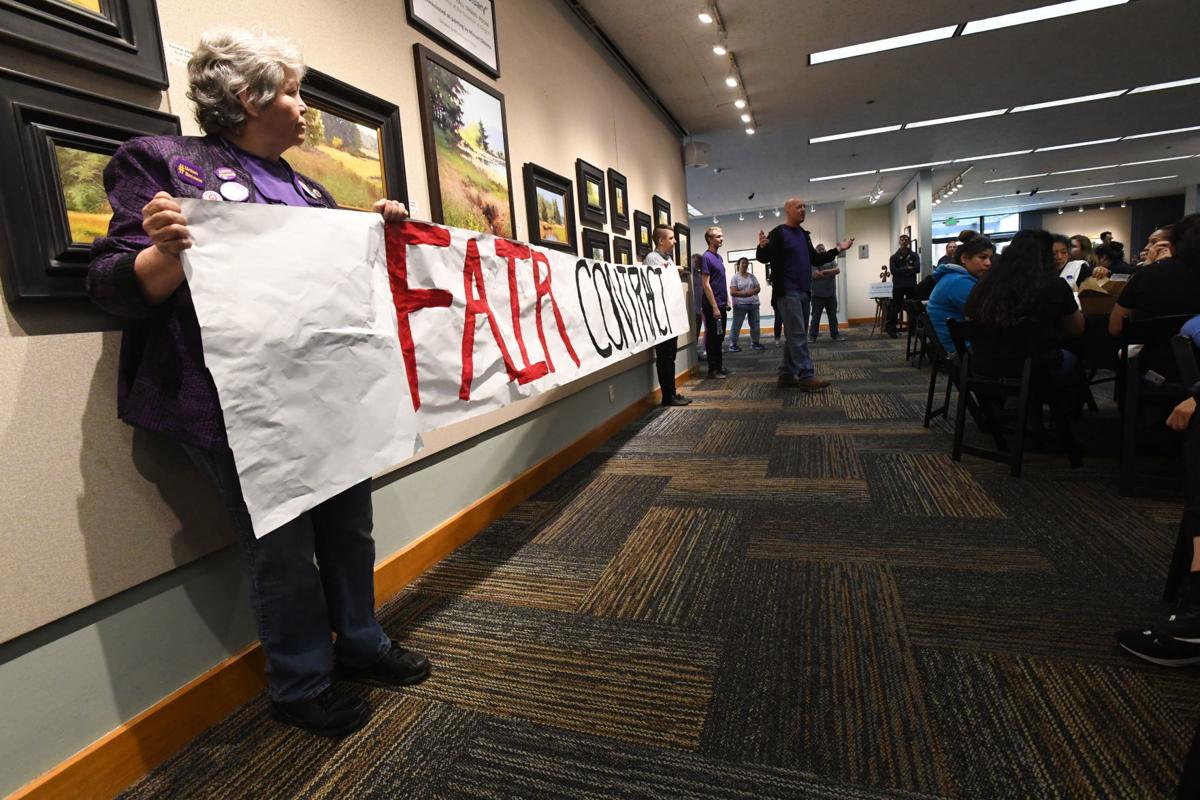 SEIU representatives told union members that they need to be ready to strike if Oregon's seven public universities don't improve their contract offer.

The head of the bargaining team negotiating a new contract for union-represented classified workers at Oregon’s seven public universities had a message for the rank and file on Tuesday: Be ready to walk off the job if management doesn’t come up with a better contract offer.

Speaking at a lunchtime rally at Oregon State University’s LaSells Stewart Center, where contract talks between the Service Employees International Union and university representatives were taking place, Rob Fullmer told a group of more than 80 union members that the current offer should be rejected out of hand.

“I would love to report how much progress we’ve made in our negotiations, but I’d be lying,” said Fullmer, who works in the information technology department at Portland State University.

SEIU Local 503 represents about 4,500 food service workers, janitors, library techs, office specialists and other nonfaculty staff members at universities around the state, including about 1,500 at Oregon State University. They have been working under a one-month contract extension since their previous collective bargaining agreement expired on June 30.

If a strike does come, it probably won't happen before the fall. Before union leaders can call a strike authorization vote, Fullmer said, contract talks would have to go to mediation.

"We expect mediation to start at the end of the month," he said.

The latest offer from the universities is a two-year contract with no raises in the first year and a 0.5% raise in the second half of the second year. Classified employees would also see their health insurance premiums triple.

Fullmer noted that the universities got an additional $100 million in state support in the two-year budget recently approved by the state Legislature, but he said union negotiators are being told none of that money would be available for classified staff, despite the SEIU’s lobbying efforts to boost funding for higher education.

“We fight like crazy to get investment for higher ed,” he said at Tuesday’s rally, “but when it’s time to invest in us, they’re broke.”

Di Saunders, an associate vice president of the Oregon Institute of Technology and a spokesperson for the universities’ bargaining team, called Fullmer’s characterization of the universities’ position “somewhat disingenuous” and said a new offer will be presented at the next bargaining session, scheduled for July 22 and 23 at Southern Oregon University in Ashland.

“The offer on the table now is based on what we knew at the end of May,” before the Legislature passed a budget, Saunders said. “We will be coming back with a revised offer on the 22nd, and the campuses are determining now what that offer will be.”

The additional $100 million from the state could give university administrators some additional flexibility at the bargaining table, Saunders said, but she cautioned that it’s not enough to solve a litany of financial woes, including rising pension and health insurance costs, that prompted a flurry of tuition increases this spring.

“The plus-$100 million won’t turn the world around because the bulk of that will be used to buy down tuition increases,” Sanders said.

“It’s also a reality that campuses will be continuing to have (job) cuts if they haven’t made them already.”

Saunders called classified workers “an extremely important part of running our universities,” adding, “We do respect them and want to treat them fairly.”

But Johnny Earl, a University of Oregon custodial coordinator who serves on the SEIU bargaining team, said those sentiments need to be expressed in a better contract offer.

“We deserve to be treated with more respect in their offer,” he said. “This is all about respect now — it’s not only about money.”

Budget cuts are coming to Oregon State University this spring, and there’s likely to be even more belt-tightening in the university’s future.

SEIU representatives told union members that they need to be ready to strike if Oregon's seven public universities don't improve their contract offer.