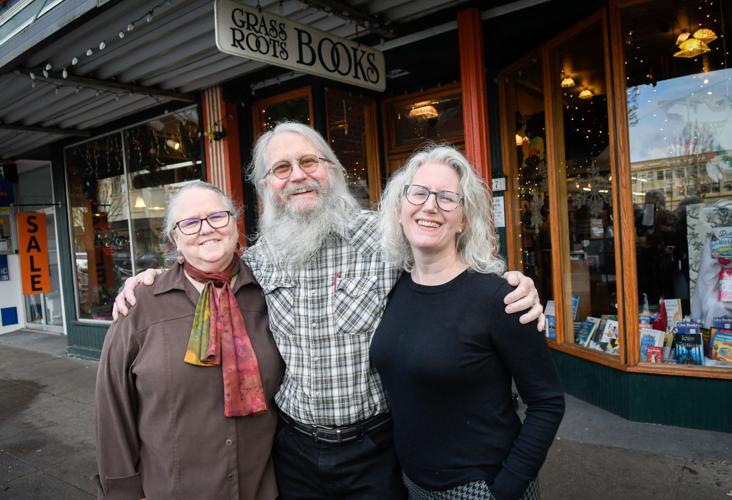 Sandy Smith, left, Jack Wolcott and Tiffany Harlan are planning a 50th anniversary of Grass Roots Books & Music in Corvallis. The celebration will be held at the appropriate time, possibly next year. 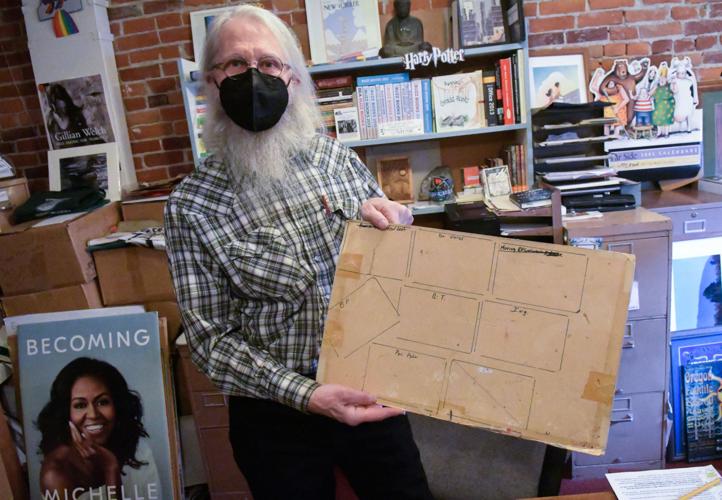 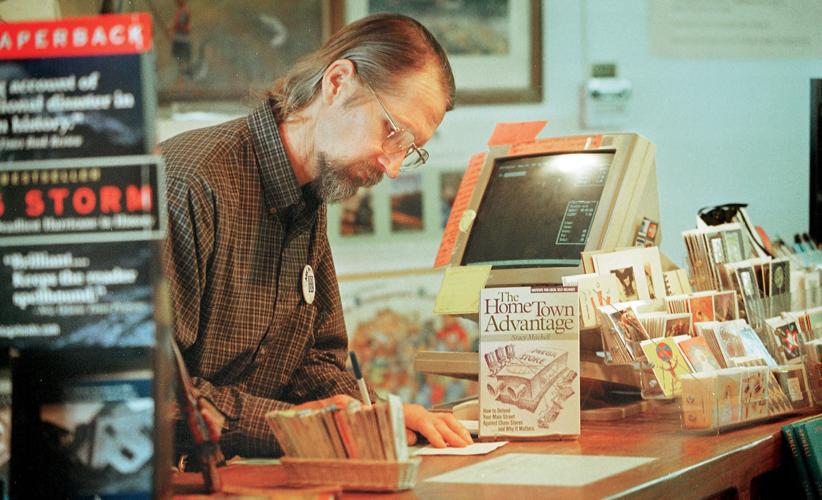 Jack Wolcott, is shown at Grass Roots Books & Music in 2000. The store has passed 50 years in business in downtown Corvallis. 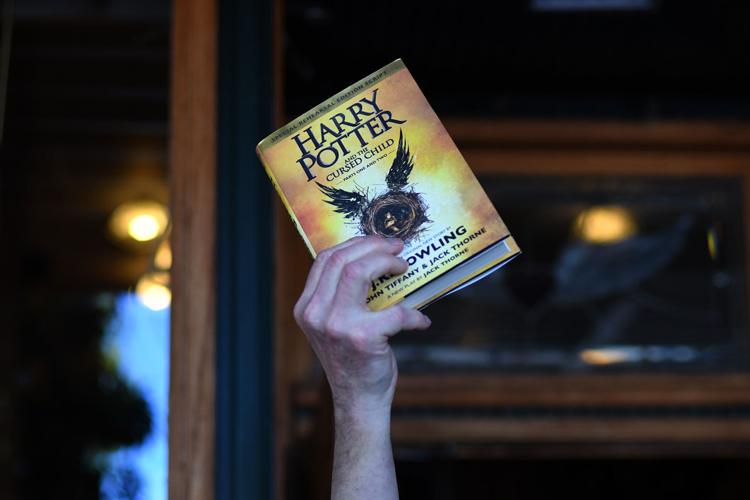 Jack Wolcott, co-owner of Grass Roots, holds up a copy of "Harry Potter and the Cursed Child" in 2016. The store has frequently held events linked to the popular J.K. Rowling series.

Question: What is stronger, Jack Wolcott’s faith in Corvallis or the community’s faith in Wolcott and his iconic creation, Grass Roots Books & Music?

Tough call. Both belief systems have withstood the test of time, in this case 50 years. It was 50 years ago in September that Wolcott, Michael Nesson and their one employee, Gordy Hoke, started Grass Roots Books & Things on Southwest Second Street in Corvallis. Wolcott and his staff had hoped to organize an anniversary celebration by now, but the COVID-19 pandemic continues to make such a large gathering impractical.

Hopefully, next year, said Wolcott, whose optimism is catching.

“We wanted to be sure to acknowledge people’s support and appropriately thank them,” Wolcott said.

Wolcott, a Salem native who graduated from Oregon State University with a degree in psychology (he once thought of working to increase consumer awareness of advertising), got the bookshop bug after visiting a store in Santa Cruz, California, called Bookshop Santa Cruz, which still stands.

“I became aware of the sheer amount of books there were on topics I didn’t know existed,” he said. “There had to be a way to share that.”

Nesson left after a year, Hoke stayed for a few years longer, and Wolcott married Sandy Smith, who became both a life partner and a business partner.

Smith developed her own bookshop bug at Village Books in Redondo Beach, California.

“I didn’t think I would ever walk into a bookstore like this and meet a man like this who somehow seemed to like me,” Smith said. “It’s incredible to have had a bookstore life.”

But this is 2021 and you can’t really have a bookstore life anymore, can you? The chain stores took over (there was a Border’s once in Corvallis), then Amazon took over, then Kindle took over. Bookstores were as dead as a doornail, right?

“I think the last five or 10 years have been a golden age for independent bookstores,” he said.

Why? Because shops such as Grass Roots never stopped working to learn about their customers — and their community. And they have taken advantage of new online tools and distribution systems to battle the Amazons on their own terms.

Wolcott and other independents (maybe we should call them interdependents) are linked to a massive book warehouse in Roseburg that offers essentially one-day service and allows Wolcott's small shop to thrive despite a relatively small in-store inventory.

“If we order by noon one day, we get it the next morning,” Wolcott said. And even if a customer could get a book quicker somewhere else, in Corvallis they prefer to work with Wolcott and his staff.

“People are confident that what we are doing has a certain level of integrity, and people are willing to give us that one day,” Wolcott said.

The online portal/distribution system accounts for 25% of Grass Roots’ sales and has been a lifesaver during COVID. Customers can order online or by phone. Grass Roots still offers free delivery nearly two years into the pandemic, but “people want to pick it up,” Wolcott said.

“People can navigate our website and we are learning from our customers. We are all helping each other and all working together.”

COVID-19 forced Wolcott and his team to adapt, and longtime employee Tiffany Harlan morphed into the czarina of the web portal.

“She’s the one doing the ordering,” Smith said. “We had huge amounts of online orders, and we owe a huge debt of gratitude to her. She has been our face for the past few years.”

The gratitude Wolcott and Smith feel toward Harlan also extends to the entire staff.

“We’re hugely grateful for a long line of employees who have worked for us,” Smith said.

The art of finding

The Grass Roots model is different. They don’t SELL you a book. They FIND you YOUR book.

“Over the years we’ve always tried to fill the needs of the community as we learned them,” Wolcott said. “We work really hard to provide a personal experience and service. What do you think and what do you want? That’s the biggest difference between independent bookstores and nationals.”

Wolcott was asked if in his wildest imagination he ever foresaw being able to order a book by computer one day and have it be delivered from Roseburg the next day.

“I love science fiction, but,” he said, computers at the time were so large and expensive that no one but the government could afford one.

Wolcott then rummages behind a curtain in his upstairs office and pulls out a piece of laminated cardboard with rectangles drawn on it. Each rectangle represented a distributor and Wolcott would place index cards for the individual books onto the appropriate distributor box.

“That was our first inventory system,” he said. "It was an early analog computer if you will. I still have some of the cards. They were color-coded. It was a wonderfully complex system. There was no way I could see enough of it at one time to make sense of it.”

As far as the books he enjoys reading Wolcott flipped the question on its head.

“I want each person who comes into the store to find their book, and I want to help them find their book. I can help so many people find their books. That is my real pleasure. I have literally spent 50 years surrounded by books and believing in the people who are drawn to them. That’s the beauty and spirit of Grass Roots.”

About 15 or 20 years ago (Wolcott and Smith can’t quite agree on the exact date) the store took “Things” out of the title and replaced it with “Music,” although these days there is no music in the store. Grass Roots will order a CD, but there is no inventory.

In Wolcott’s view there is a huge gulf separating book publishers and the music industry. When albums took a backseat to downloads of individual songs Wolcott checked out, comparing the approach to taking a book apart by its chapters and burping them out in pieces.

Events and readings always have been a part of the Grass Roots experience. In non-COVID-19 times the shop would host two or three in-store events per week. Coronavirus, paradoxically, has meant more events are available to Grass Roots customers.

In the pre-2020 days, Wolcott said, many authors would make a West Coast swing and do Seattle, Portland and the Bay Area, skipping the mid-valley. Now, with everything on Zoom, a blizzard of events are available to Grass Roots customers. Smith, meanwhile, used the moment to reminisce about sitting on the floor of the store and having tea with author Barry Lopez.

“It’s incredible to see someone watch a poet or an author speak for the first time,” Wolcott said. “It’s a transformative experience.”

Grass Roots also got caught up in the Harry Potter craze, when stores would hold midnight debut events. For the release of the third book, the line snaked down Second Street and around the block, Wolcott said, with the biggest challenge being finding space inside the store for folks to come in and buy the book.

“As soon as one of the kids had the book in his hands, he sat down in the store and started reading it,” Wolcott said. “That’s the magic of a book.”

Wolcott also noted the importance of businesses such as Grass Roots to the local economy, citing data that shows local spending tends to have a multiplier effect that leads to more local spending.

“Corvallis always has been supportive of local business,” Wolcott said. “You can make a significant difference shopping locally. It’s a team effort. But we don’t expect people to shop here because we’re local. We want to earn their business and not take it for granted.”

Wolcott is 74 and said he wishes he had the time and energy to be more involved in community affairs.

“I am literally worn out, and yet each day I wake up eager and refreshed. I love to work. I would be happy if I died right here. I can’t think of something better. This,” he said, gesturing at the store, “is my term paper, but it’s not finished yet. It’s so incredible what I have learned working in a bookstore on a daily basis.”

Browser's Bookstores in Albany, Corvallis may be closed — or sold

'I thought that there was maybe a 5% chance that we would be sold. Now, it’s much greater than 5%.'

Books, blurbs, bestsellers and ... balderdash (and it's not Anne Tyler's fault)

Books are expensive. To make because they use lots of paper. To sell because you have to put them in trucks and send them to stores and then h…

Obadiah Baird loves collectible books, and one of his first achievements as a new owner of The Book Bin was opening up a rare books room at th…

Editor's Note: This story has been updated to reflect the number of featured student soloists.

Sandy Smith, left, Jack Wolcott and Tiffany Harlan are planning a 50th anniversary of Grass Roots Books & Music in Corvallis. The celebration will be held at the appropriate time, possibly next year.

Jack Wolcott, is shown at Grass Roots Books & Music in 2000. The store has passed 50 years in business in downtown Corvallis.

Jack Wolcott, co-owner of Grass Roots, holds up a copy of "Harry Potter and the Cursed Child" in 2016. The store has frequently held events linked to the popular J.K. Rowling series.