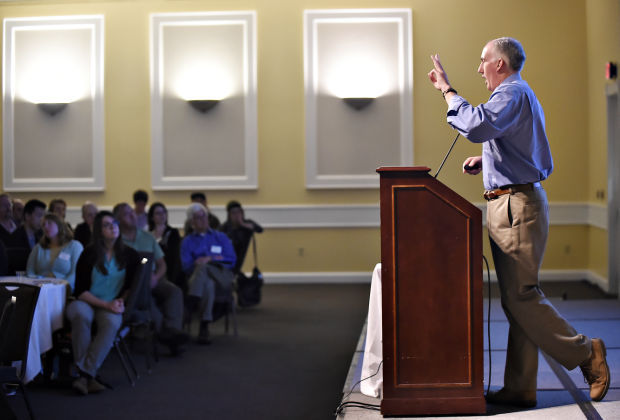 Keynote speaker Sean McGuire makes a point as he addresses the crowd at the annual Sustainability Coalition Fair and Town Hall on Thursday at the CH2M Hill Alumni Center. 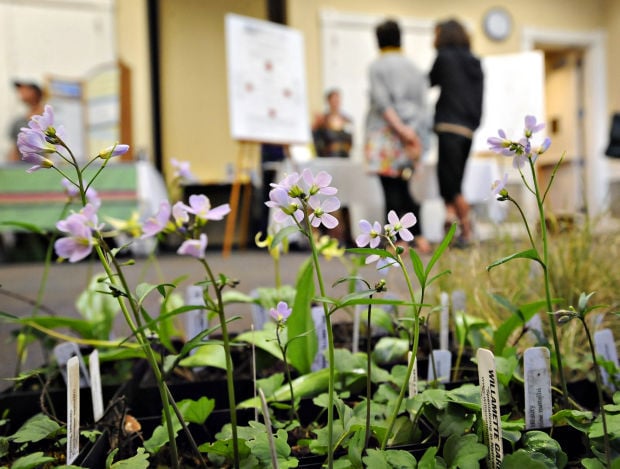 Cardamine nuttallii from Willamette Gardens brightens up one of the exhibit rooms at the annual Sustainability Coalition Fair and Town Hall on Thursday.

The Corvallis City Council has approved a council goal for this two-year term that includes the creation of a livability index that will measure the community’s well-being.

This year’s Sustainability Fair and Town Hall featured an expert with some ideas on how Corvallis could make such a project happen.

Sean McGuire, who works on global progress indicators for the state of Oregon after seven years in a similar position in Maryland, was the keynote speaker at the sustainability event, which brought more than 500 participants to the CH2M Hill Alumni Center.

McGuire cited Corvallis’ popular farmers market as an example of an entity from which the community can derive more than just an economic benefit (such as the gross domestic product numbers government agencies release).

“I’ve only been here 1½ years, but it still takes me about two hours to get through it,” McGuire said. “Yes, there is economic activity, but it’s also the talking to people, it’s connecting. How do you make more of these things happen naturally? How do you measure these things if you are in government?

“And how do you turn it into what you envisioned.”

McGuire cited a five-step process: visualizing the plan, measuring, establishing value, linking aspects together and putting the plan to use.

As an example of the value concept, McGuire looked at education and noted that college graduates tend to volunteer more, vote more, are more involved in their community and are more philanthropic. And yet most indices don’t note such value-added components when the benefits of college are examined.

McGuire also offered an analysis of how mental health issues can “cost” a community. Approximately 3 percent of the population has a mental illness, such problems tend to worsen if a person winds up in jail, recidivism for those who have been in prison can be as high as 70 percent and you wind up in a vicious cycle.

“How do we provide the information so we can make good decisions?” McGuire said. “We can start doing this by design and turn the vision for a better Corvallis into a reality.”

The seventh rendition of the fair and town hall also featured exhibits and vendors from coalition partner organizations and its action teams, food provided by Valley Catering and interactive table discussions that will provide the coalition with information that will drive future initiatives.

Keynote speaker Sean McGuire makes a point as he addresses the crowd at the annual Sustainability Coalition Fair and Town Hall on Thursday at the CH2M Hill Alumni Center.

Cardamine nuttallii from Willamette Gardens brightens up one of the exhibit rooms at the annual Sustainability Coalition Fair and Town Hall on Thursday.