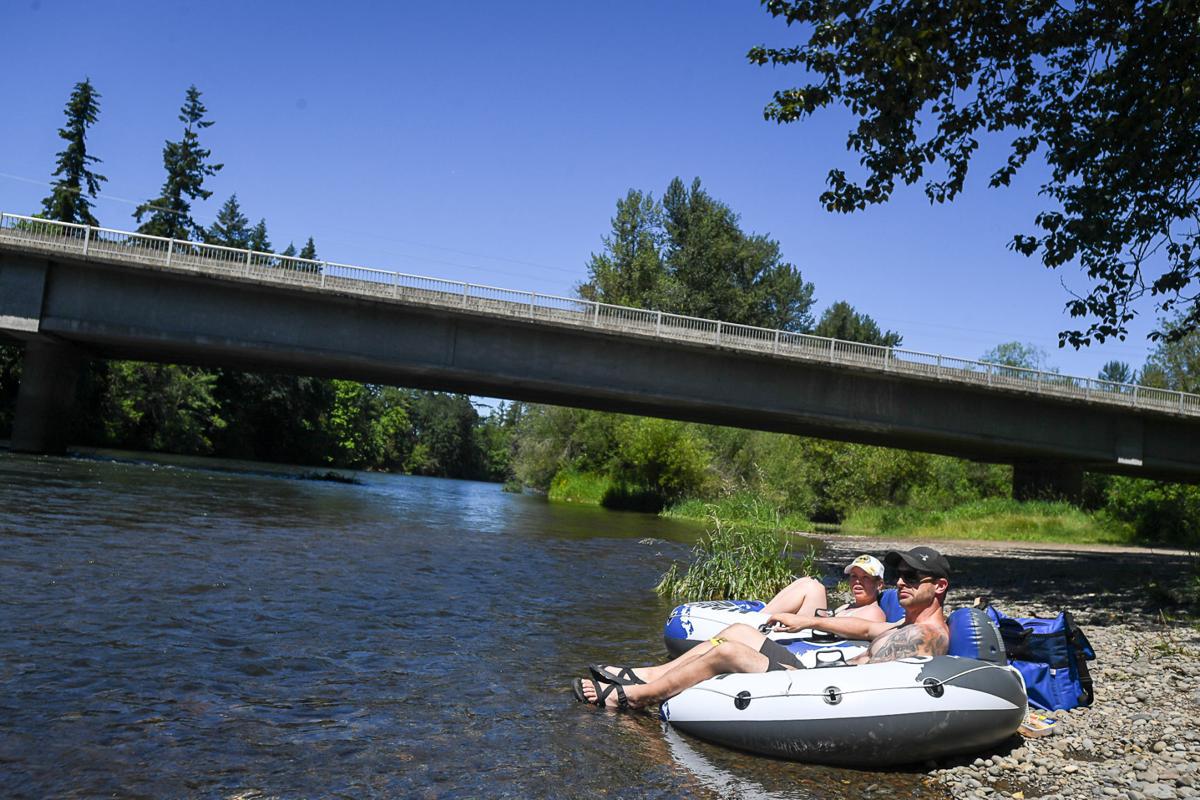 Greg and Meghan Smatlan decided to have a shoreline picnic rather than inner-tubing on the North Santiam River near Jefferson Monday afternoon after hearing of a nearby water rescue. 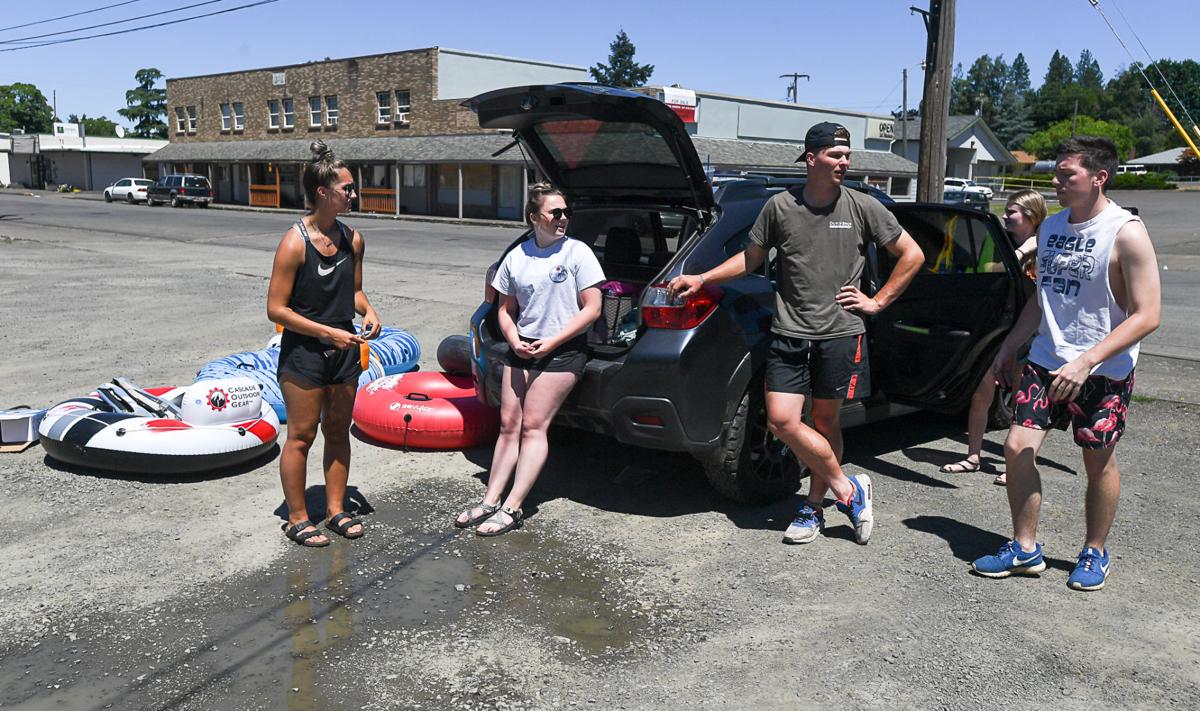 A group of high school friends from Salem, from left, Melania Umulap, Hannah Crum, Ryan Brown, Holly McGill and Kolton Welter, wait in downtown Jefferson for the rest of their squad to show up for a float trip on Monday afternoon. 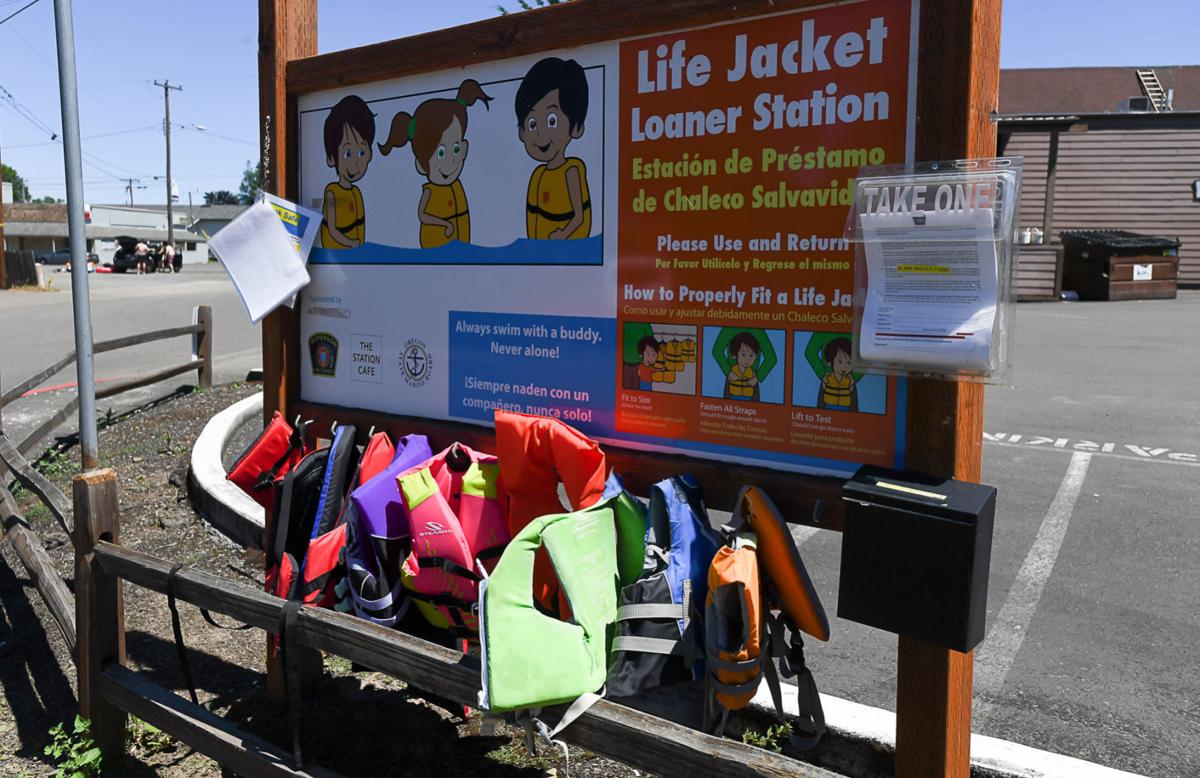 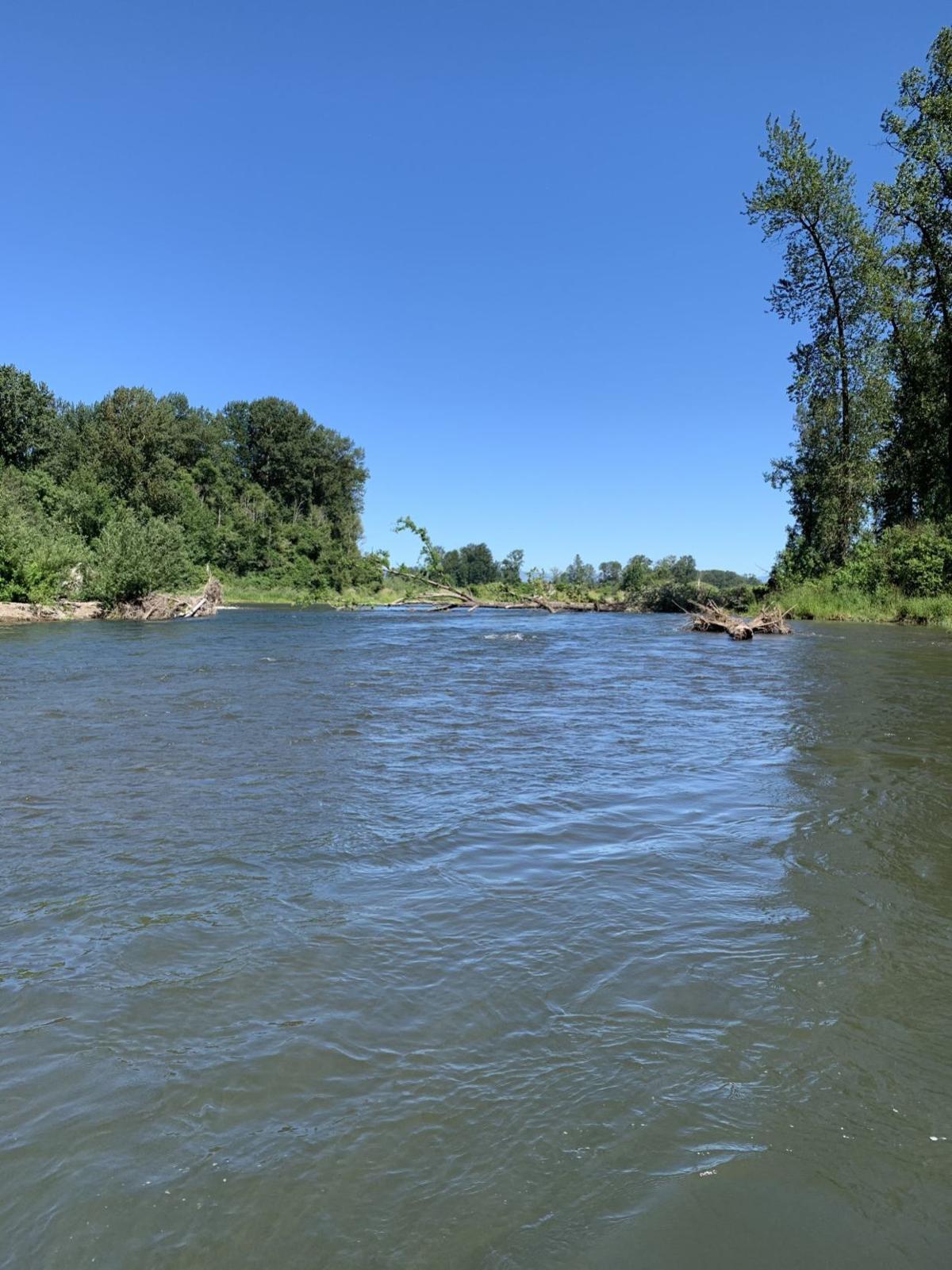 The left side of the Santiam River confluence is filled with debris, as shown by this picture courtesy of the Jefferson Fire District.

JEFFERSON – Greg and Meghan Smatlan of Salem went to Greens Bridge to float down the Santiam River on Monday afternoon, but they ended up sitting along the bank in their inner tubes. “This is as far as we’re going,” Greg Smatlan said.

The couple said they heard about a water rescue and dangerous conditions on the Santiam earlier in the day and decided to play it safe. “This is what you call a shoreline picnic,” Greg Smatlan added. He and his wife enjoyed lunch and soaked up the sun as chilly water lapped their toes.

The summer is about to get hot — the National Weather Service has predicted a high of 91 degrees for Albany and Corvallis on Tuesday, with temperatures in the 80s through Friday — and that means residents will flock to local waterways to boat, float and swim.

But mid-Willamette Valley rivers are running cold, high and swift, and areas can be filled with debris such as downed trees, according to authorities.

Local officials urged caution and asked residents to take safety steps, including: wearing a life jacket; going with a friend or a group in case something goes wrong; carrying a cellular phone in a waterproof bag or container; planning your route and knowing the area in case you have to call for help; being aware of signs of hypothermia; keeping a constant eye on children; and staying sober and being aware of your surroundings.

Tammy Robbins, Jefferson Fire District spokeswoman, said the confluence of the north fork and south fork of the Santiam River is especially dangerous. On Monday afternoon, a woman was knocked off her inner tube and sucked underneath some branches at the location. While she was able to keep her head above the surface, the woman inhaled some water. The group of friends she was floating with was able to get her to a nearby sandbar. The Jefferson Fire District used its rescue boat to transport the woman from the sandbar to the Jefferson boat ramp. She was then taken by ambulance to Salem Hospital.

Robbins said that people floating down from Greens Bridge should stay to the right of the river near the confluence, as the left side is laden with debris.

The Jefferson Fire District also was one of several agencies that responded to a drowning at Salmon Falls County Park northeast of Lyons on Saturday afternoon. A 27-year-old man died after jumping from a rock ledge into the Santiam when the water temperature was in the 40s, according to a news release from the Marion County Sheriff’s Office.

Many rivers are running higher and faster than normal due to heavy rainfall in June, according to authorities. Robbins said the above-normal water levels are hiding debris near riverbanks that can be dangerous.

Sandy Roberts, Albany Fire Department spokeswoman, said that downed trees can look enticing as something to hold onto in the water, but they are incredibly unsafe and should be avoided. People can get pushed into the debris with the current, get their legs tangled up in branches under the water or have inner tubes popped by sticks.

Roberts and Battalion Chief Brett Loomis of the Corvallis Fire Department said that the easiest thing for people to do to keep safe is to wear a life jacket. “They really can make the difference between a life saved and a life lost,” Loomis said.

Roberts said that life vests need to fit properly, however. “If you can lift that vest up toward your ears, you don’t have the right size. You don’t want to have that excess room so it rides up past your chin and face,” she said.

Some local agencies, including the Albany Fire Department and Jefferson Fire District, have life jacket loan programs, where residents can borrow personal flotation devices for free.

Loomis said that it’s also important for people to simply respect the power of water. “On the surface, it can seem very calm and very inviting. But when you get in, it’s cold water coming off the mountains and the currents can be very strong,” Loomis said.

He also urged residents to be careful if they see a boater or swimmer in distress in a river or lake. “Those that intend to be the rescuer sometimes become the victim. Make sure you’re in a position to help without endangering yourself,” Loomis added.

A man drowned at Salmon Falls County Park northeast of Lyons on Saturday afternoon, according to a news release from the Marion County Sheriff…

Summer is going to look different this year as the state continues to battle COVID-19, but for those who do venture out, the warmer months wil…

The Jefferson Fire District is urging residents not to float the Santiam River between Greens Bridge and the Jefferson boat ramp, as there hav…

Greg and Meghan Smatlan decided to have a shoreline picnic rather than inner-tubing on the North Santiam River near Jefferson Monday afternoon after hearing of a nearby water rescue.

A group of high school friends from Salem, from left, Melania Umulap, Hannah Crum, Ryan Brown, Holly McGill and Kolton Welter, wait in downtown Jefferson for the rest of their squad to show up for a float trip on Monday afternoon.

The left side of the Santiam River confluence is filled with debris, as shown by this picture courtesy of the Jefferson Fire District.