Become a Member
Read Today's E-edition
Share This
Schools debate: Gifted and talented, or racist and elitist?
0 Comments
Share this

NEW YORK (AP) — Communities across the United States are reconsidering their approach to gifted and talented programs in schools as vocal parents blame such elite programs for worsening racial segregation and inequities in the country's education system.

A plan announced by New York City's mayor to phase out elementary school gifted and talented programs in the country's largest school district — if it proceeds — would be among the most significant developments yet in a push that extends from Boston to Seattle and that has stoked passions and pain over race, inequality and access to a decent education.

From the start, gifted and talented school programs drew worries they would produce an educational caste system in U.S. public schools. Many of the exclusive programs trace their origins to efforts to stanch "white flight" from public schools, particularly in diversifying urban areas, by providing high-caliber educational programs that could compete with private or parochial schools.

Increasingly, parents and school boards are grappling with difficult questions over equity, as they discuss how to accommodate the educational aspirations of advanced learners while nurturing other students so they can equally thrive. It's a quandary that is driving the debate over whether to expand gifted and talented programs or abolish them altogether.

"I get the burn-it-down and tear-it-down mentality, but what do we replace it with?" asked Marcia Gentry, a professor of education and the director of the Gifted Education Research and Resource Institute at Purdue University.

Gentry coauthored a study two years ago that used federal data to catalogue the stark racial disparities in gifted and talented programs.

It noted that U.S. schools identified 3.3 million students as gifted and talented but that an additional 3.6 million should have been similarly designated. The additional students missing from those rolls, her study said, were disproportionately Black, Latino and Indigenous students.

Nationwide, 8.1% of white children in public schools are considered gifted, compared with 4.5% of Black students, according to an Associated Press analysis of the most recent federal data.

Gifted and talented programs aim to provide outlets for students who feel intellectually constrained by the instruction offered to their peers. Critics of the push to eliminate them say it punishes high achievers and cuts off a prized opportunity for advancement, particularly for low-income families without access to private enrichment programs.

In Seattle, a schools superintendent who left her job in May sought to do away with the district's Highly Capable Cohort program, as the district's gifted and talented program is called, blaming it for causing de facto segregation. In its own recent analysis, Seattle public schools found only 0.9% of Black children had been identified as gifted, compared with 12.6% of its white students.

The school board has approved changes that will do away with eligibility testing and make all grade schoolers automatically eligible for consideration for advanced instruction. In addition to grades, the selection committee will consider testimonials from teachers, family and community members.

The changes don't go far enough for critics like Rita Green, the education chair of the Seattle Chapter of the NAACP. She has called for more work to build environments that nurture the intellectual development of all the district's 50,000 schoolchildren.

Debates over the criteria for admission to advanced courses and elite schools predate the latest national discussion about racial inequities, but have intensified since the killing of George Floyd.

In Boston, the school committee voted this summer to expand eligibility to its exclusive exam schools and guarantee spots to high-achieving students from poor and disadvantaged neighborhoods.

Latino students account for roughly 42% of Boston's 53,000 public school students -- about twice the number as whites -- but are vastly underrepresented in advanced courses. By the district's account, fewer than 20% of the fourth graders invited to participate in advanced work classes were Latino, while 43% of those invited were white.

Many children are overlooked because of language and cultural barriers, said Iván Espinoza-Madrigal, the executive director of Boston's Lawyers for Civil Rights. Subconscious bias among teachers who nominate students for the program also play a role, he said.

Elsewhere, the renowned Lowell High School in San Francisco in February scrapped admissions exams in favor of a lottery system. In Fairfax County, Virginia, parents recently lost a legal bid to undo their school district's decision to do away with testing for admissions to a campus catering to high achievers in science and technology.

Most gifted and talented programs have relied on tests to determine eligibility, with some families spending thousands of dollars on tutoring and expensive specialized programs to boost scores and increase their children's chances of getting a coveted spot.

Controversy over admissions into advanced education programs has simmered in other cities, including Los Angeles and Chicago. But nowhere has the debate been as intense as in New York, where Mayor Bill de Blasio said last month that he would begin to dismantle the program in elementary schools, calling it "exclusive and exclusionary."

Some parents, including Rose Zhu, have called on the city to expand the program, not do away with it. She joined dozens of other parents outside the city's Department of Education building this month to protest de Blasio's proposal, bringing along her 21-month-old daughter, who Zhu hopes will follow two older siblings into the city's gifted and talented program.

"I live in Queens, and our traditional schools in our districts aren't really good," she said. "So the G and T program is the best school I can put them in."

De Blasio's likely successor, fellow Democrat Eric Adams, has said he does not support eliminating the program, which would put him at odds with some of his Black constituents. Adams himself is African American.

One such constituent, Zakiyah Ansari, the New York City director for the Alliance for Quality Education, wants Adams to follow through with de Blasio's pledge.

"We believe every child is a gifted child, every child is a talented child," Ansari said. "We have to have people as angry about taking away one program that impacts a few people and be more upset about the Black and brown kids who haven't had access to excellent education."

But Gentry, the director of the Gifted Education Research and Resource Institute, agreed that it was time for "a revolution to fix the problem that's been long standing in terms of equity" in access to gifted and talented instruction.

She urged parents and school administrators to do the hard work of finding a compromise.

"I worry that the easy solution is to stop doing it," she said. "I know the inequities exist. But the thing is, there's a huge distinction between overhauling or eliminating."

Why do gifted programs exist?

Do they make a difference?

Who is moving away from gifted programs?

Why are districts making changes?

What role has racism played in the history of gifted programs?

The local sheriff said he didn't know why the boy's father bought the gun. Several students from the shooting remain in critical condition, including a 14-year-old on ventilator. Here's the latest.

US sees first case of omicron variant detected in California

The United States' first confirmed case of the omicron coronavirus variant has been identified in California, according to a source familiar.

A prosecutor filed involuntary manslaughter charges against the parents of a teen accused of killing four students and wounding seven others in Michigan.

Omicron-stricken South Africa may be a glimpse into the future

New COVID-19 cases in South Africa have burgeoned from about 200 a day in mid-November to more than 16,000 on Friday. Here are the latest updates on the omicron variant.

Authorities say eight people were wounded in an attack at a Michigan high school in which three students were killed.

Omicron in at least 5 US states; Congress averts shutdown; plus more top news

Things to know today: WHO says measures used against the delta variant should also work for omicron; Congress averted a shutdown. Get caught up.

Things to know today: Nations are trying to keep the new omicron variant at bay with travel bans; the sex-trafficking trial of Jeffrey Epstein's longtime companion Ghislaine Maxwell gets underway.

Delta variant still causes almost all US virus cases. Will omicron add misery or fade away?

Expert: “Omicron is a spark that’s on the horizon. Delta variant is the fire that’s here today.” With two variants on the loose in the U.S., here's what we know, and what we don't. Plus, the latest maps and stats on the virus. 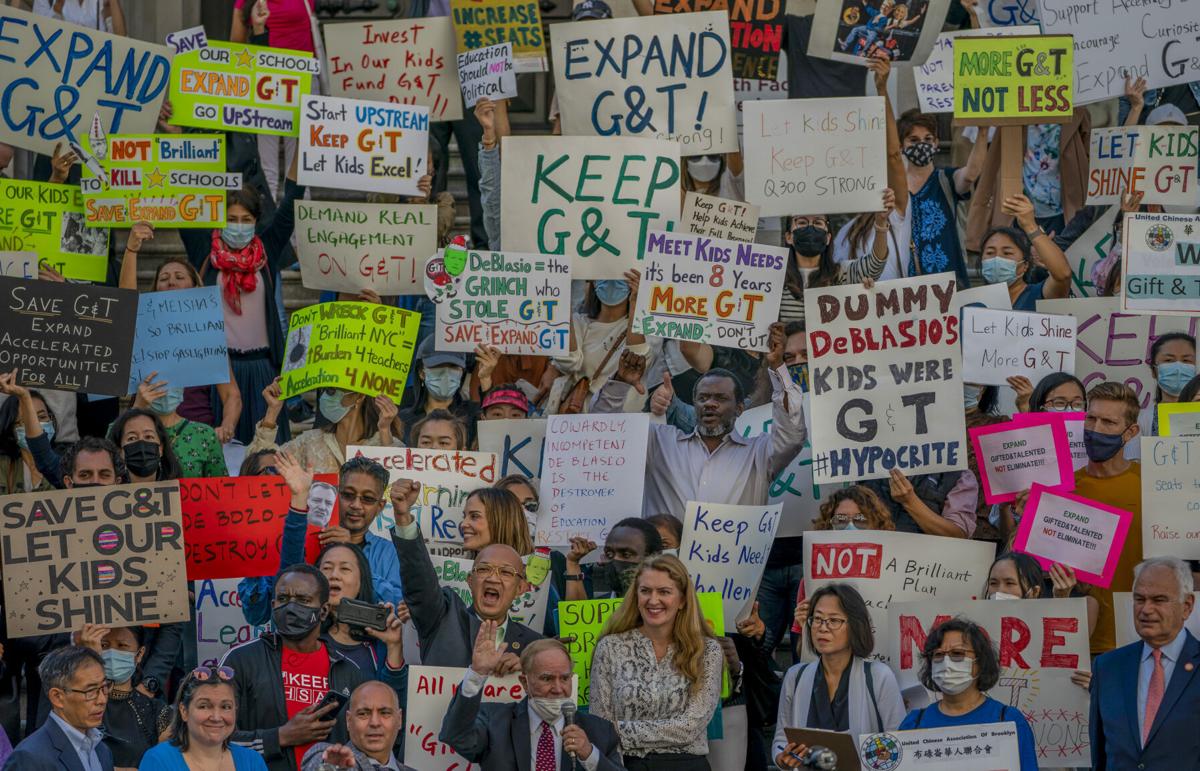 In this Thursday Oct. 14, 2021, file photo, protesters at City Hall condemn Mayor Bill de Blasio's plan to phase out the Gifted and Talented (G&T) public school program in New York. Public school programs for the gifted and talented are garnering increased scrutiny nationwide, as critics denounce them as modern-day segregation and push for broader access or outright elimination. 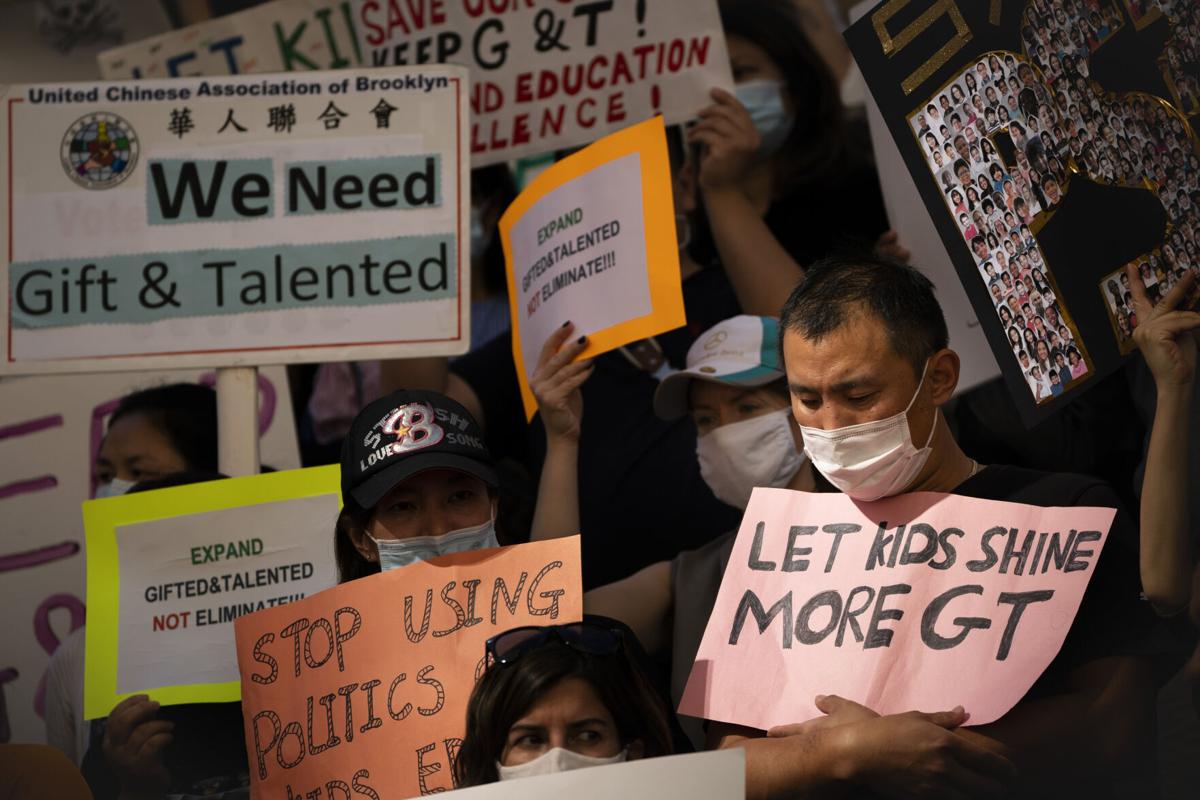 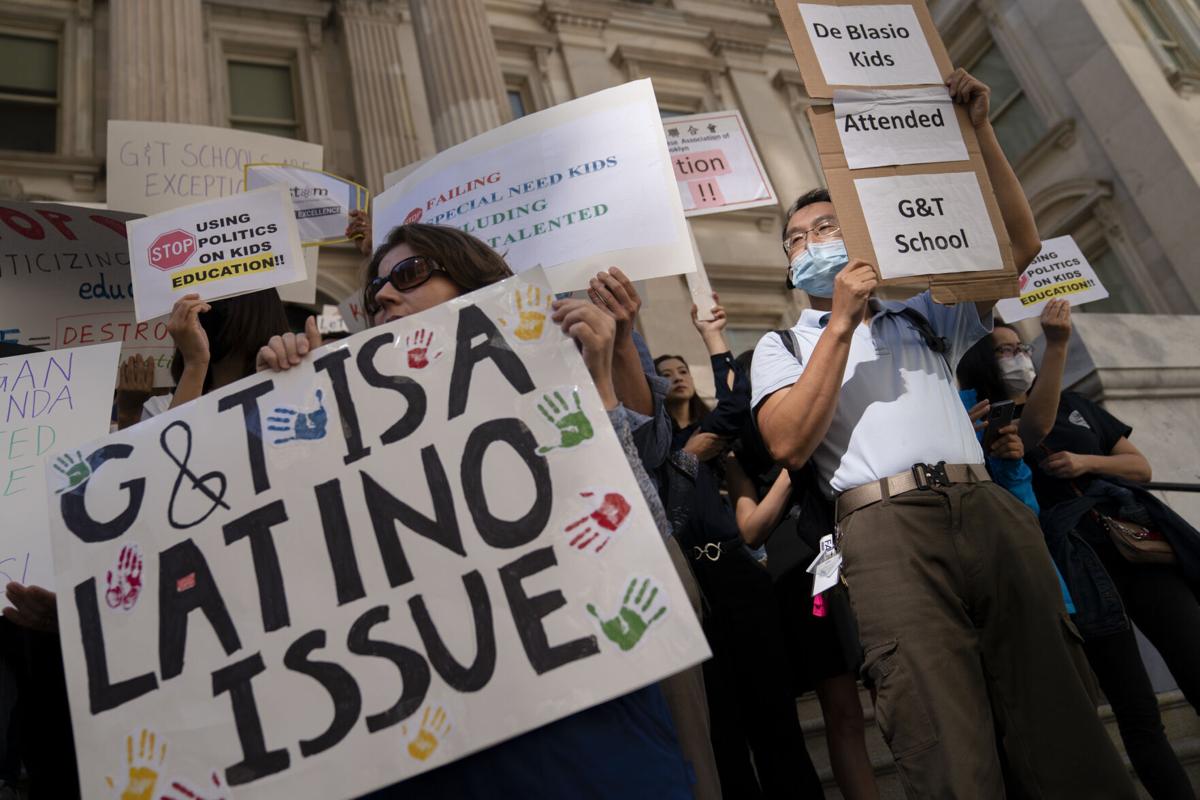