Superintendent Melissa Goff introduces herself to the Greater Albany Public Shool's staff during a Back to School rally at Timber Ridge School. 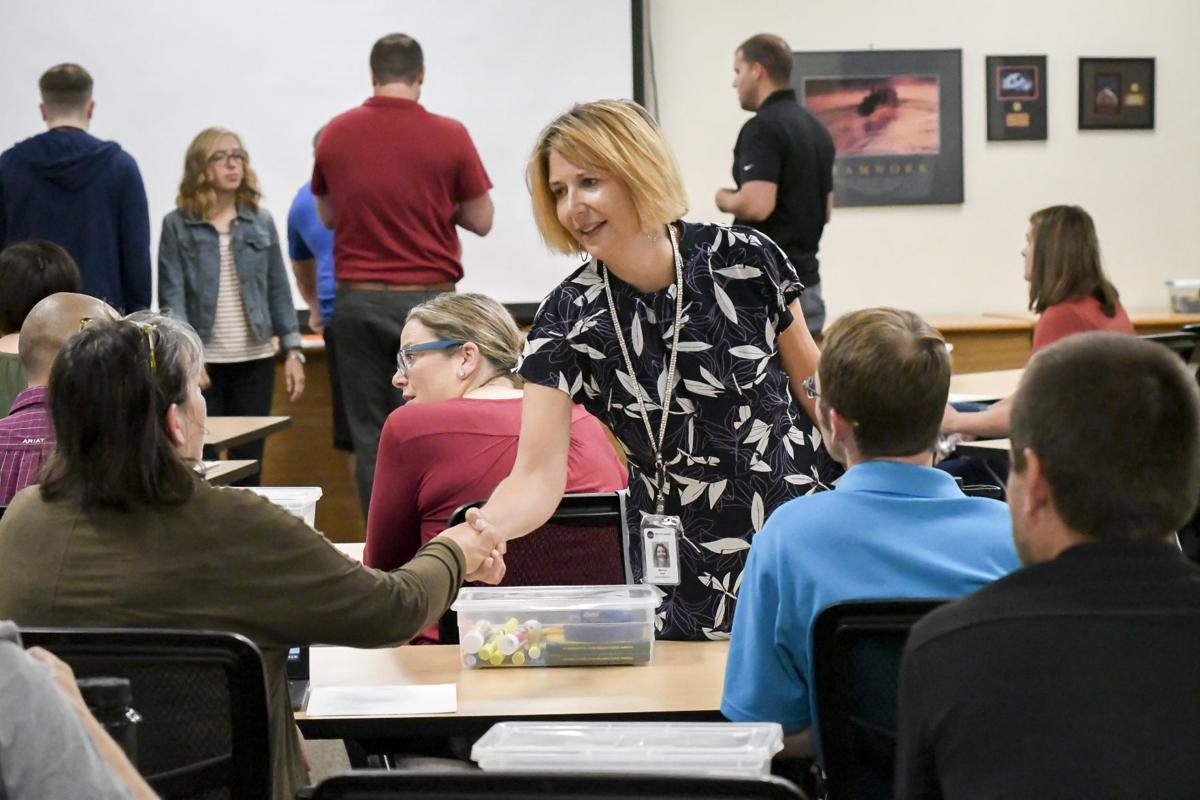 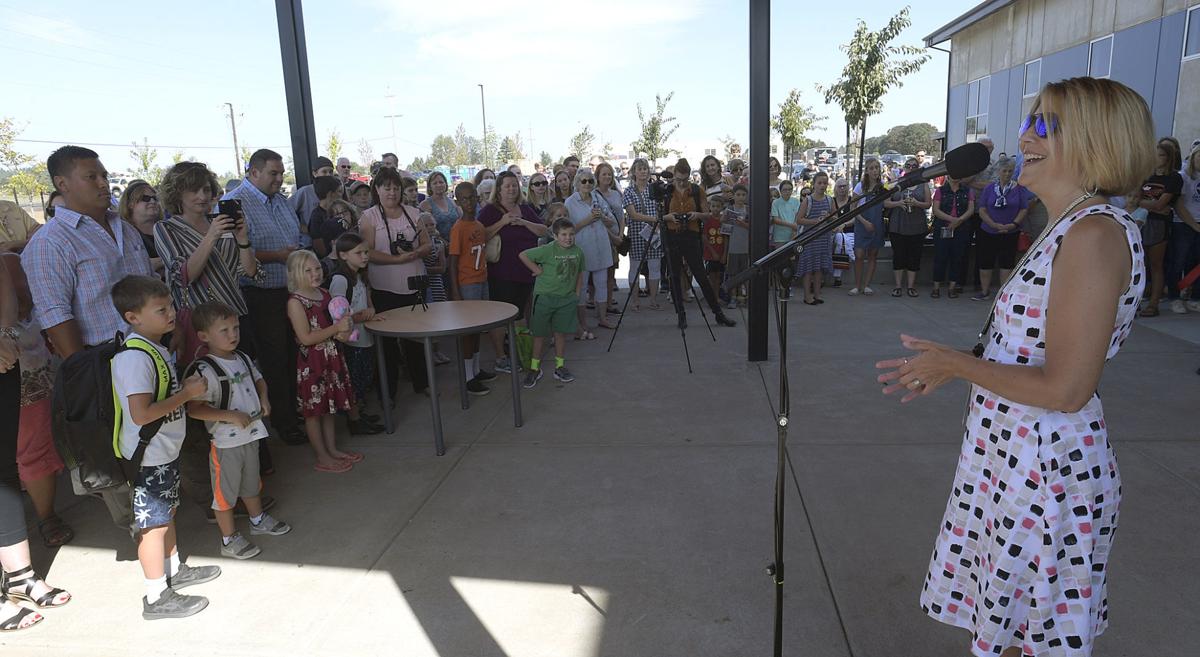 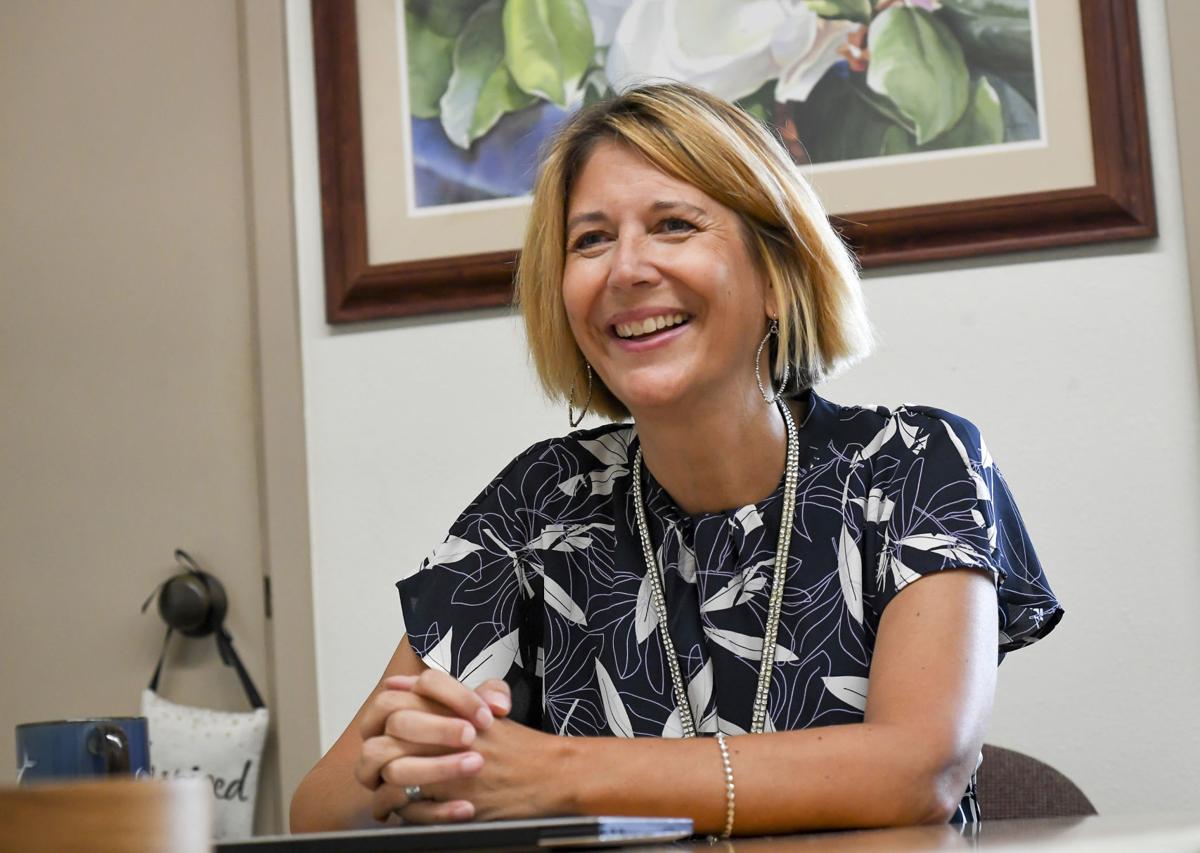 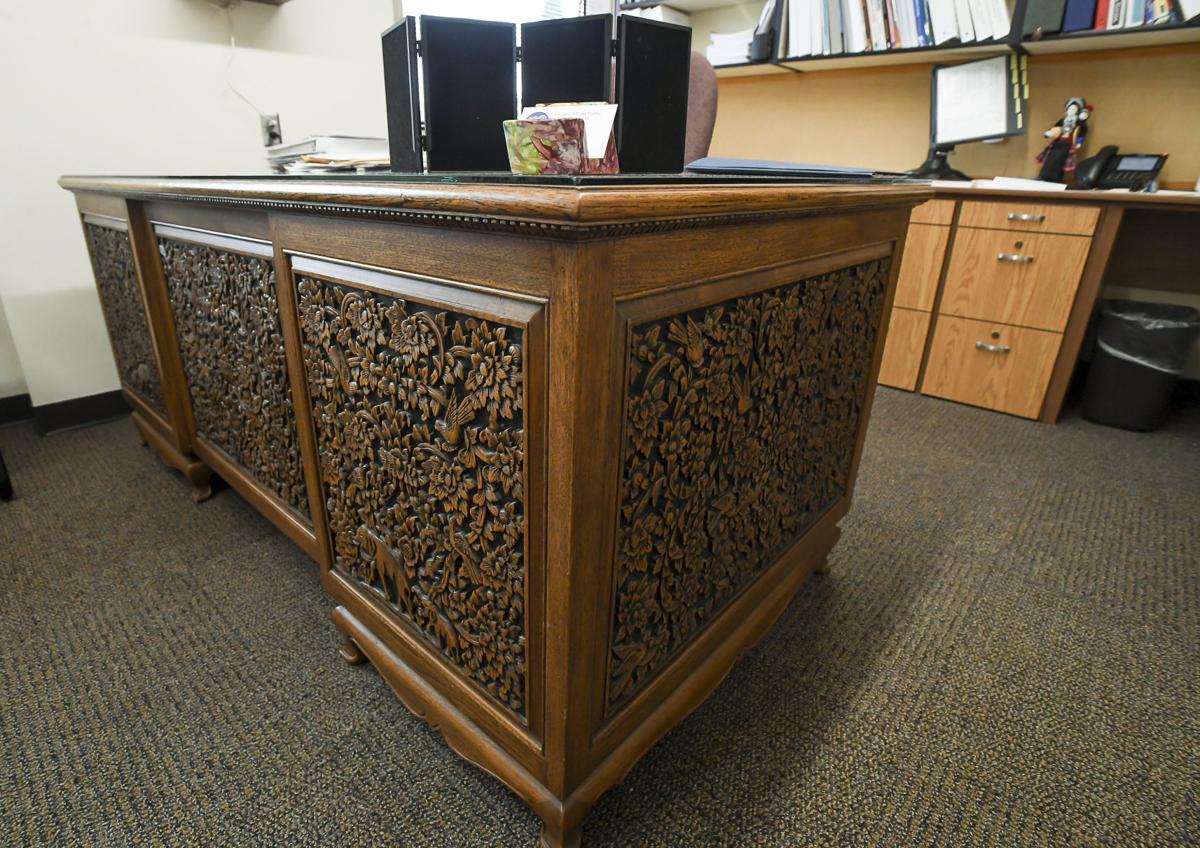 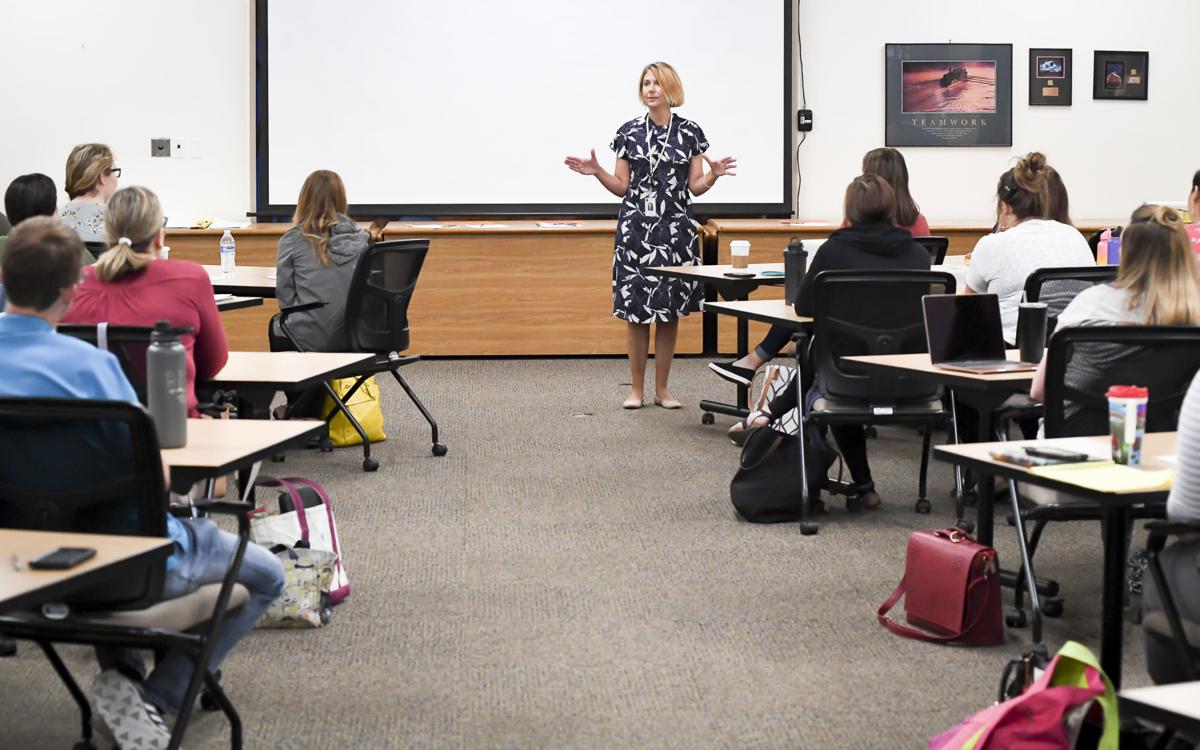 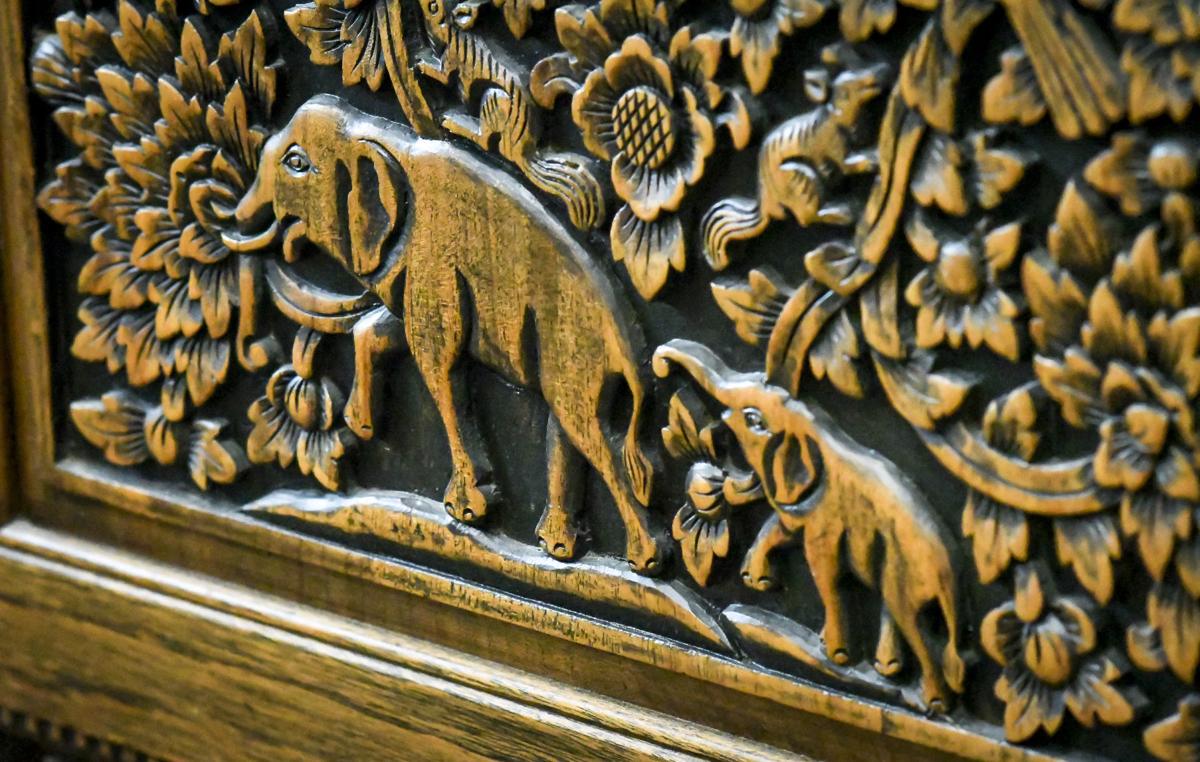 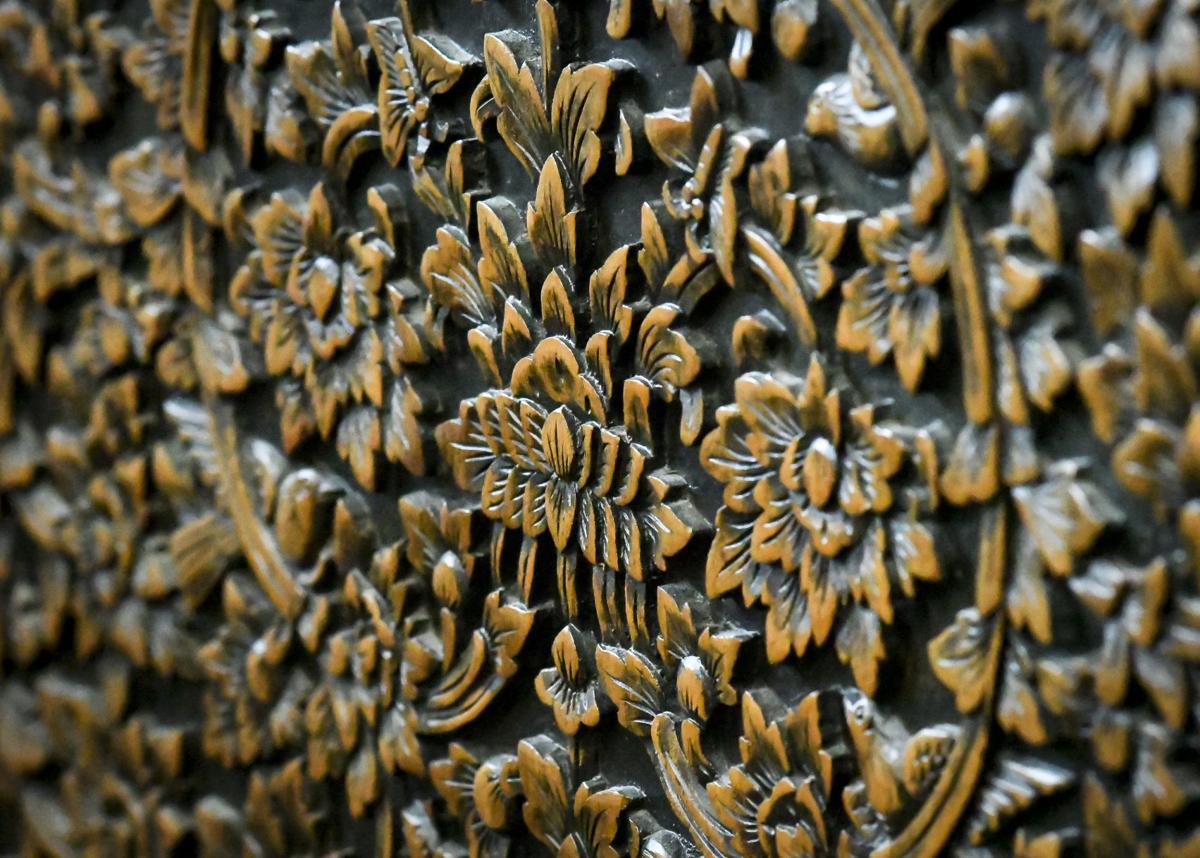 Greater Albany School Supertinedent Melissa Goff said she prefers sneakers like the pair she sported on Tuesday as opposed to high heels. 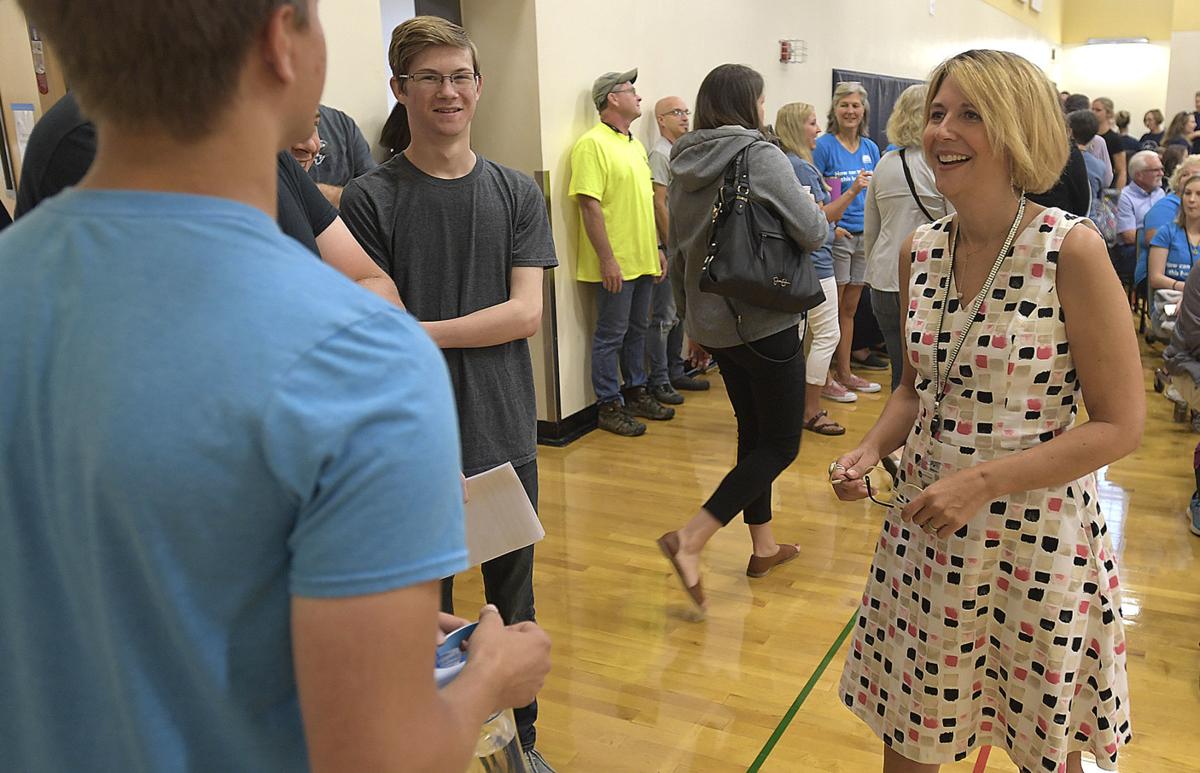 On a rainy Thursday morning in the last breath of summer, the gym at Timber Ridge Elementary School was alive with the sounds of an old-fashioned pep rally. Class T-shirts and school pride filled the bleachers. And although the participants haven’t been students for years, they still show up to class every morning.

They’re the teachers and staff of Greater Albany Public Schools, and they were there at the school to learn.

She crossed to the podium, her Mickey Mouse sneakers, laced with black strings, leaving less of an impact on the gym floor than traditional high heels. With a deep breath, three claps of her hands and an arm held high, she coaxed silence from the crowded Timber Ridge bleachers.

For just under an hour she paced the floor with the practiced ease of a teacher at the board, calling on raised hands and giving instructions for participation as she brought the entirety of the district’s staff through her journey as an educator. Teachers, custodians, bus drivers and cafeteria workers hooted and hollered, drowned the gym in applause and fell silent in all the right places. It wasn’t a lecture; it was an experience.

One Goff hopes becomes shared among her new staff in a district healing from the sudden termination of its previous superintendent and a subsequent lawsuit, and also facing the same challenges plaguing schools around the nation: larger class sizes, smaller budgets, disruptive behavior and inequity.

They’re challenges Goff has met head-on in her 20-plus year career as an educator, and on that rainy Thursday, she tells the crowded bleachers that GAPS can meet them, too, because educators are the sum of the parts of their past. And the key to connecting with students, to help them succeed, is to draw from it.

Goff fell in love with the smell of chalk in the locker rooms of college basketball teams. Her father, who played at Oregon State University, would later tote her around to his coaching gigs where she would watch him scratch out plays on a blackboard. To this day, her favorite room in a school is the gym.

Her mother stayed at home with her older brother and sister, and when Goff started kindergarten, her mom went back to school too.

“I spent a lot of time in law libraries,” she said, attributing her tag-alongs during her mother’s law school days to her later years as an English teacher.

Her mother’s influence is in much more than her career choice, though.

Not much is complete in Goff’s new office at the Albany Public Schools District Office on SW Seventh St. She was hired by GAPS in April, but the former tenant, interim superintendent Tim Mills, didn’t vacate the office until June. Once he did, staff could finally measure the door.

“It wasn’t a deal breaker, but I did ask!” Goff says of the door frame that just barely allowed her desk to pass. It was her mother’s, carved overseas as a gift from her grandparents after her mother became the first female law partner east of the Cascade Mountains. It’s followed Goff from district to district.

Given the opportunity to ask her entire staff a question, she started with this: How many of you did something because someone who looked like you did it first?

It’s a lesson that’s foundational in the classrooms where she's taught. It's also part of her grander philosophy: Teachers can be informed by their own experiences and enriched by engaging with the experiences of others.

But it was in high school where she learned that not all teachers are the same.

Goff’s family moved to Bend shortly after adopting another son, Chris, and it would open her eyes to the effects the education system could have on children who don’t fit the mold.

“We started therapy and the therapist told my mother that he would never connect with someone else after what he had been through,” Goff said. “My mother refused and loved him so hard.”

Chris did bond and followed Goff to high school, seven months her junior. There, they often encountered the same classes and the same teachers.

“They would be the same teacher but our experiences were different,” she said. “Heartbreakingly different.”

Chris couldn’t sit still. He was also quick to anger. And Goff was a self-admitted people-pleaser.

Chris stood, she said, and confronted the teacher. “The teacher told him to get out and never come back and that’s what he did. He got a C in that class.”

Just a year later, Chris would find one of Goff’s favorite English teachers and tell a different story when he got home — he would actually have to attend that class. He worked hard and struggled through. He had to participate in class and turn in assignments. He got a C in that class as well.

“He had to go because that teacher knew his name and if he wasn’t there,” Goff told her staff. “You can be the first teacher or you can be the second teacher.”

They play eight-man football in Mitchell, Oregon. It’s where Goff started her teaching career after graduating from Portland State University, and also where she taught English, ran a student leadership group, coached cheerleaders and manned the concession booth for a school with less than 100 students in grades K-12.

During her first week there, she heard a student say the "N" word. When she confronted him, he shrugged it off. A social studies teaches uses it all the time, he said.

Not long after, a friend from Bend who played football in college wanted to see Mitchell’s eight-man football team in action. But on the ride to meet Goff at her doublewide trailer, he saw a Confederate flag. When he arrived at her door, he said he couldn’t go.

“I said ‘You’re right; you can’t go,’” she said. “I made a decision about someone else based on race because I was worried what it would mean for my job,” she told the crowded Timber Ridge gym, bringing the hoots down to whispers and the hollers down to nothing.

A week before the pep rally, sitting across the room from her mother’s desk and reflecting on her journey from English teacher in Mitchell to alternative school educator in Beaverton to administrator in Portland and Philomath, Goff says it boils down to disrupting the system.

“Working in Portland Public shifted my thinking for the rest of my life,” she said. “I grew up as a white woman in Oregon with the curriculum that Oregon taught. There was very little representation of people of color in that curriculum, very little history about what was the experience of black people in Oregon, what were sundown laws, what happened with redlining, how were native people treated, what happened during the Japanese internment camps and how that impacted Oregonians. None of that was taught.”

In Portland, where she served as assistant superintendent and faced with a large immigrant population, Goff said her thinking shifted.

“It was having constructive conversations training about race in Portland,” she said. “Right now, us working with our students and helping them understand that racism is still real and alive and it’s something we need to look at and we do have privilege because of the color of our skin because our systems are built for us,” she said. “Our education system hasn’t changed since it was founded, no matter how hard we’re trying. If we don’t disrupt, then we’re going to continue to have crisis like we see right now.”

The teachers and staff had already been in the gym since 8 a.m. But after more than an hour on the bleachers, they still managed to lean forward just a bit as Goff brought her show to a close.

“With agency comes responsibility,” she said. Her own agency, she said, takes many forms: She’s white. She's 48. She has a master’s degree and, with a microphone in her hand, can make people laugh.

“I’m bad in small crowds, though, so don’t expect much,” she said, raising her hand again and releasing her class.

Just outside the gym, her assertion is put to the test as staff files out and one by one flocks to shake hands and introduced themselves. Some say they’ve been teaching for decades. Others are just starting. Some want to know how Chris is doing now (just fine), and others simply pass making sure to catch her eye, issue a thumbs up and smile.

They don’t ask about her experience in Philomath, where she served as superintendent for the four years prior to coming to Albany and where a hazing investigation into multiple sports teams showed abuse going back to 2010 and yielded new mandates from OSAA. They also don’t ask about former superintendent Jim Golden, who was terminated by the school board in 2018 and who subsequently filed suit against the district — a suit that settled only two days before Goff took to the podium at Timber Ridge. And for that, she’s grateful.

“I’m so glad that was yesterday,” she said standing in an emptying hallway just outside the gym, earning a reminder of a packed schedule from an assistant. “This is today.”

A settlement has been reached in the lawsuit filed against the Greater Albany Public Schools district by former superintendent Jim Golden.

PHILOMATH — Since Clemens Community Pool opened to the public in December 1960, countless Philomath children have braved its waters to learn h…

Imagine living in poverty, said Amanda Makepeace, the adult literacy program coordinator for a new program coming to the mid-valley.

The ground near Water Avenue in Albany may begin to shake on Sept. 9. But according to city officials, there’s nothing to worry about.

“There’s the old stigma that this is the bad kids' school,” Albany Options School Counselor Anna Harryman said on the second day of school in …

The banner outside Pioneer Christian Academy promises a fall 2019 opening. And just behind the Brownsville Community Garden, there are, in fac…

Superintendent Melissa Goff introduces herself to the Greater Albany Public Shool's staff during a Back to School rally at Timber Ridge School.

Greater Albany School Supertinedent Melissa Goff said she prefers sneakers like the pair she sported on Tuesday as opposed to high heels.