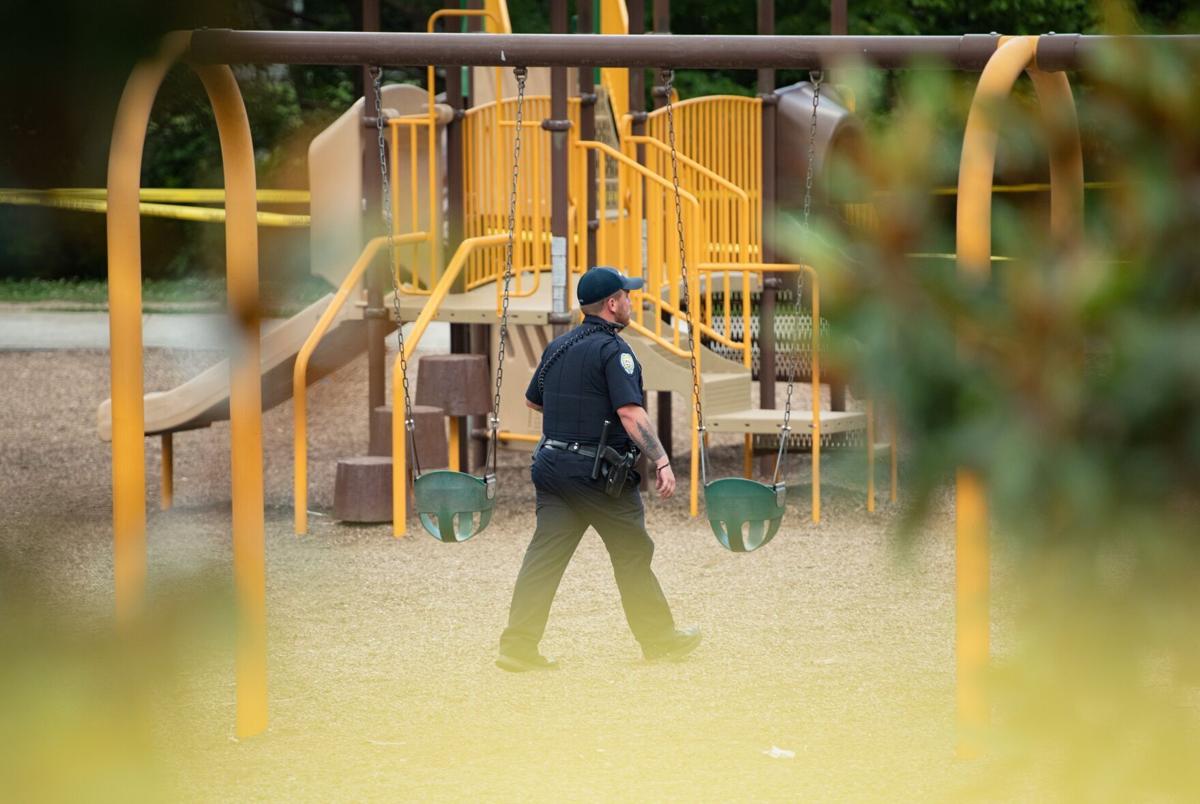 A Winston-Salem police officer walks through the playground at Hanes Park after the shootout. 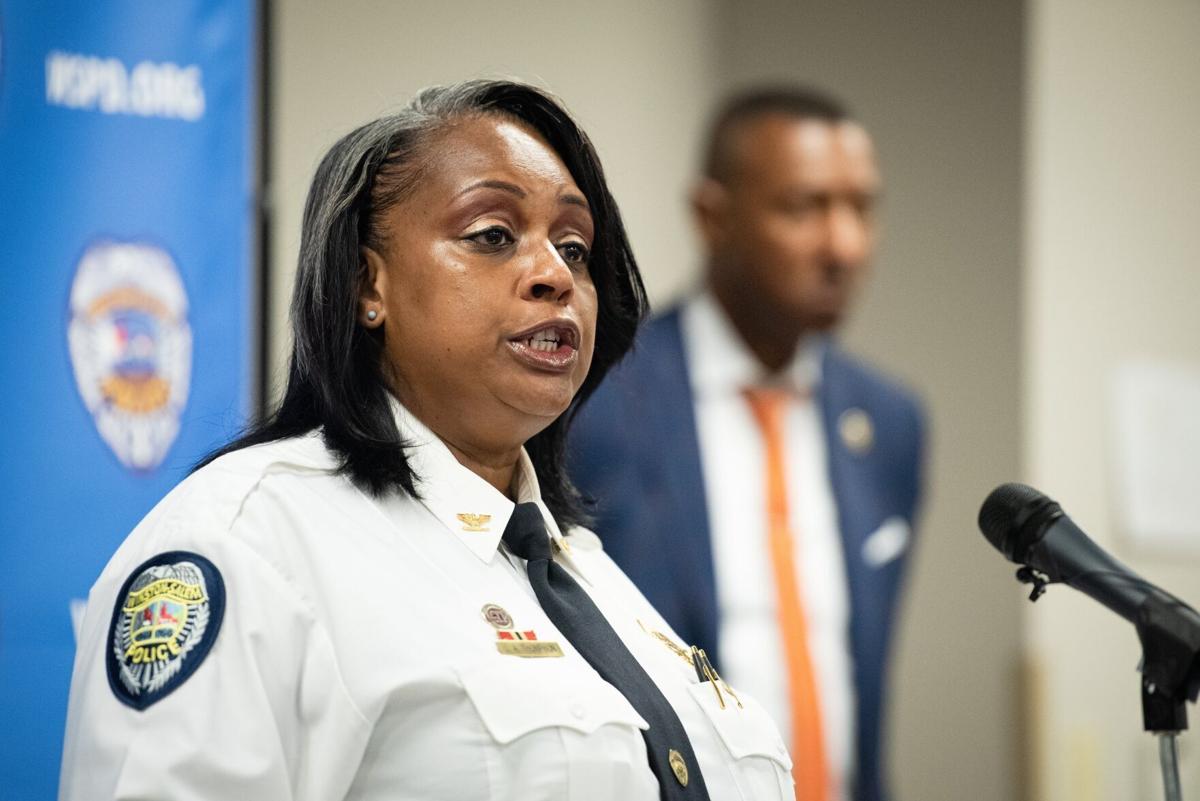 Winston-Salem Police Chief Catrina Thompson addresses the investigation of the shootout earlier in the day at Hanes Park during a press conference at Beaty Public Safety Center on Monday, June 14, 2021 in Winston-Salem, N.C. 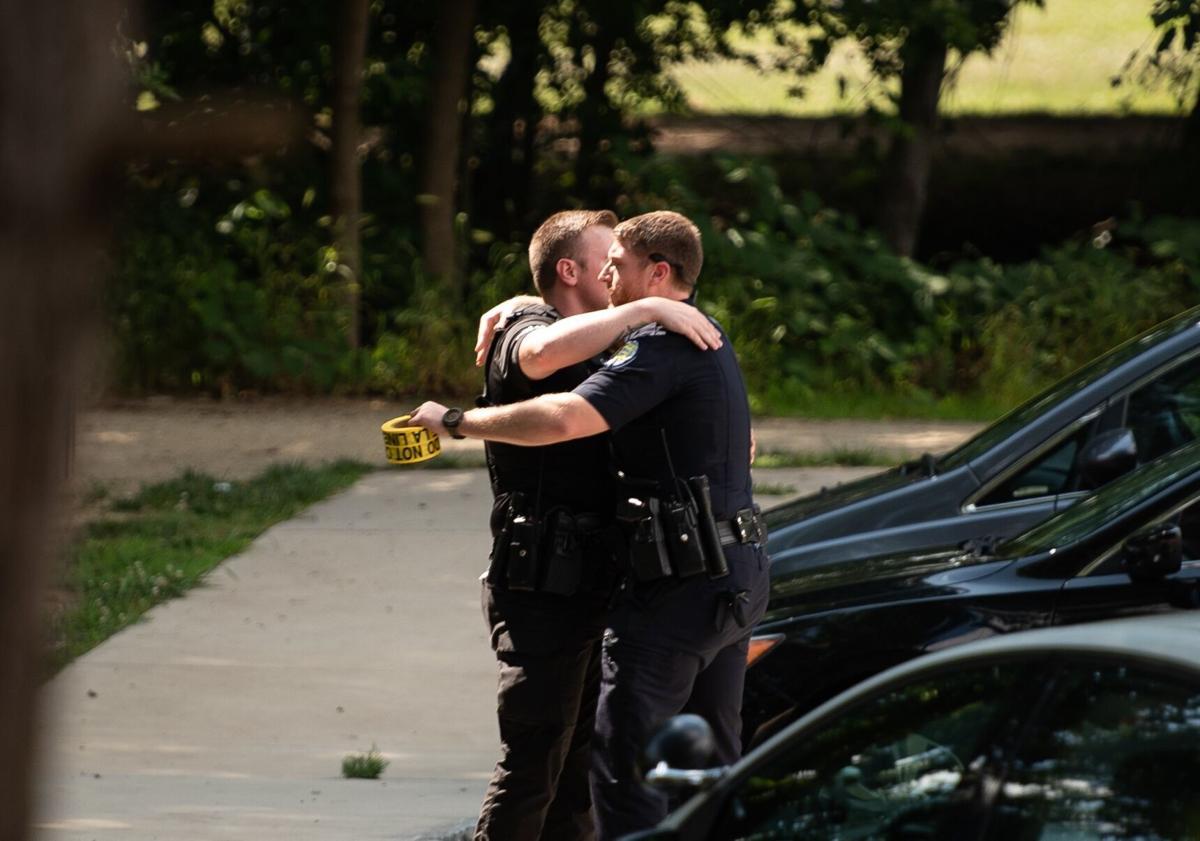 The bodies of a man’s mother and grandmother were found in separate locations Monday, after police arrested the man they say fired more than a dozen shots into a police substation, then led officers on a crosstown car chase that ended with exchanges of gunfire at Hanes Park.

William Coleman Scott was taken into custody at Hanes Park after police shot the 26-year-old suspect, Winston-Salem Police Chief Catrina Thompson said during the Monday night news conference. Scott is hospitalized in stable condition. Authorities said Scott is being investigated in the deaths of his mother and grandmother but so far has been charged only with attempted murder of a law enforcement officer.

Winston-Salem police and Forsyth County sheriff’s deputies found the body of Scott’s mother in her house in Clemmons, and the body of his 84-year-old grandmother, Glenda Snow Corriher, at her home at 224 Tabor View Lane in Winston-Salem.

Police did not say how Corriher died. Forsyth County Sheriff Bobby Kimbrough said during the joint news conference with Thompson that Scott’s mother died of a gunshot wound. Kimbrough did not name the woman, saying that family members had not yet been notified.

Thompson said Scott fired the shots at the District 1 police substation, located at 7836 North Point Boulevard, at 3:34 p.m. This was right before a shift change and Thompson said more than 50 Winston-Salem police employees were inside. Police officers stationed outside saw Scott fire the shots and immediately pursued them in their patrol cars, Thompson said.

The chase covered four miles and ended right in front of the Reynolds High School gymnasium. Scott, Thompson said, got out of his car and started firing his rifle at officers before dropping the weapon and running through Hanes Park.

Officers chased him, and Scott fired a handgun at the officers, Thompson said.

She said the officers fired back and Scott was struck. Thompson did not say how many times Scott was struck and where. She said officers tried to save Scott’s life until EMS personnel arrived. Scott was then taken to a local hospital.

Thompson said that after Scott was taken into custody, investigators broadened their investigation and discovered the bodies of Scott’s mother and grandmother:

“Because of the brazen attack on the police substation, officers began the process of identifying places of residence so that evidence of the crime could be sought,” she said. “Officers were also concerned that the extremely violent attack on the officers might indicate that relatives or associates of Mr. Scott might be in danger.”

Law enforcement officers found the body of Scott’s mother in a house at 1708 Curraghmore Road in Clemmons. The house is owned by Andrew and Kimberly Scott.

In the sprawling Waterford subdivision in Clemmons, as people walked back from the swimming pool and rode scooters on the quiet roads, cars from the Forsyth County Sheriff’s Office blocked Curraghmore Road at Kinsale Court and Glengarriff Road.

Winston-Salem police are investigating Corriher’s death as a homicide. The Forsyth County Sheriff’s Office is handling the investigation into the death of Scott’s mother, also considered a homicide.

Until police converged on Hanes Park as they chased their suspect, it was a typical sunny summer afternoon in the park, with children taking part in summer camp and high schoolers practicing for football.

With sirens blaring, police sealed off Hanes Park in all directions and made their way toward the shooter.

Linda Shieh, driving home from the YMCA near Hanes Park, said she saw people hunkering down in the YMCA parking lot as police cars started pouring in near the tennis courts on the east side of the park.

“That’s when I got out of my car and saw and heard the gunfire,” she said. “I saw the police officers, multiple police officers, in the tennis parking lot behind their vehicles, trading gunfire” with someone among the trees near Peters Creek, which runs through the park.

Another witness said he saw at least six police officers kneeling at one point with their guns trained on the suspect. Some bystanders were waiting to pick up their children at the YMCA. One said that when she heard the popping of the gunfire, she ducked down into the driver’s seat of her car while another mother and son ducked behind her car.

When there appeared to be a lull, she said, all three of them ran into an orthodontist’s office.

Young children playing on the swings and slides at the Hanes Park playground found themselves whisked across the street and into apartments near the park.

“It was a little scary, just not knowing where it was, but it sounded close by,” the woman said.

It became clear that the suspect was shot, Shieh said, when the sound of the gunfire ceased. At that point, she said, about 20 officers ran over to where the suspect lay on the ground. At first, Shieh thought the suspect had been killed, but then she noticed him being helped to an ambulance.

Police made drivers divert to side streets or turn around. Officers began putting up yellow police tape around a section of the park, then expanded the area being closed off and forced people further back from the developing crime scene.

During the chase and following events, police alerted officials with the Winston-Salem/Forsyth County Schools to recommend lockdowns at Wiley Middle School, which overlooks Hanes Park, along with nearby Reynolds High School and Brunson Elementary School, according to Brent Campbell, a spokesman for the school system. Lockdowns were also recommended at Paisley IB School, Lowrance Middle School, Cook Elementary School and the Kingswood School at Crossnore School & Children’s Home.

Campbell said that while school ended last week, there were a small number of staff members at each school.

Among the young people in the park were Reynolds High School football players who were going through an off-season practice at the park, according to Leah Crowley, a school board member whose son was among those practicing. Crowley said her son told her that the gunfire sounded like firecrackers going off. The team was quickly led to an area near the baseball dugouts.

By 4:30 p.m., police were allowing parents to pick up their children from the YMCA.

No police officers were injured in the shooting, but officer Joshua D. Huntley received minor injuries when his police car wrecked while he was responding to the general call for help.

Reports showed that Huntley was driving east in the 2500 block of Robinhood Road when he had a tire blow out as he traveled through a curve and his vehicle came into contact with a curb. Huntley’s car ran off the north side of the roadway, struck two trees and came to a stop against the back of a house at 900 Roslyn Road, reports showed. The 2500 block of Robinhood Road was closed for about two hours as police investigated the wreck.

Thompson, visibly shaken during Monday night’s news conference, said she was grateful for the “compassion and dignity” that Winston-Salem police took in the immediate aftermath of someone shooting into a police station.

“I’m extremely grateful for their efforts and for the sacrifices they and their families make every day,” she said. “I hope that you too are proud and grateful for them.”

Thompson said three officers are now on administrative duty pending an investigation by the State Bureau of Investigation. She also said an internal investigation will be done.

According to the N.C. Department of Public Safety’s offender information web page, on Dec. 14, 2016, Scott was convicted of assault and given a probationary sentence.

WATCH NOW: Suspect loaded in ambulance after shooting at Hanes Park on June 14, 2021

IDAHO FALLS, Idaho (AP) — A Utah energy cooperative said it will reduce the number of small modular nuclear reactors it will build in Idaho fr…

PORTLAND, Ore. (AP) — Ecologists in a vast region of wetlands and forest in remote Oregon have spent the past decade thinning young trees and …

Democrats back Biden US lands pick assailed by Republicans

Size of Oregon wildfire underscores vastness of the US West

PORTLAND, Ore. (AP) — The monstrous wildfire burning in Oregon has grown to a third the size of Rhode Island and spreads miles each day, but e…

CHILOQUIN, Ore. (AP) — A wildfire in south-central Oregon is growing rapidly and degrading air quality as it chews through national forestland…

A Winston-Salem police officer walks through the playground at Hanes Park after the shootout.

Winston-Salem Police Chief Catrina Thompson addresses the investigation of the shootout earlier in the day at Hanes Park during a press conference at Beaty Public Safety Center on Monday, June 14, 2021 in Winston-Salem, N.C.