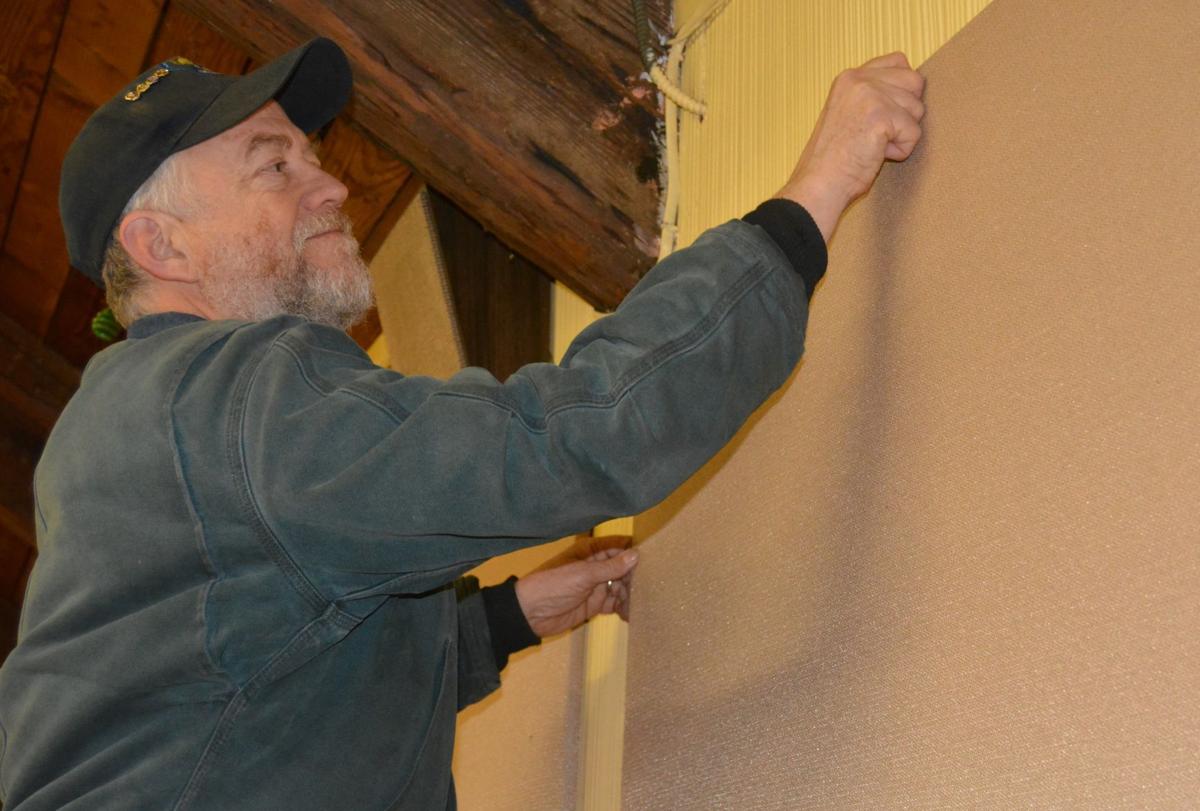 Marys River Grange Master Jay Sexton looks at an acoustic panel that was installed recently in the hall. 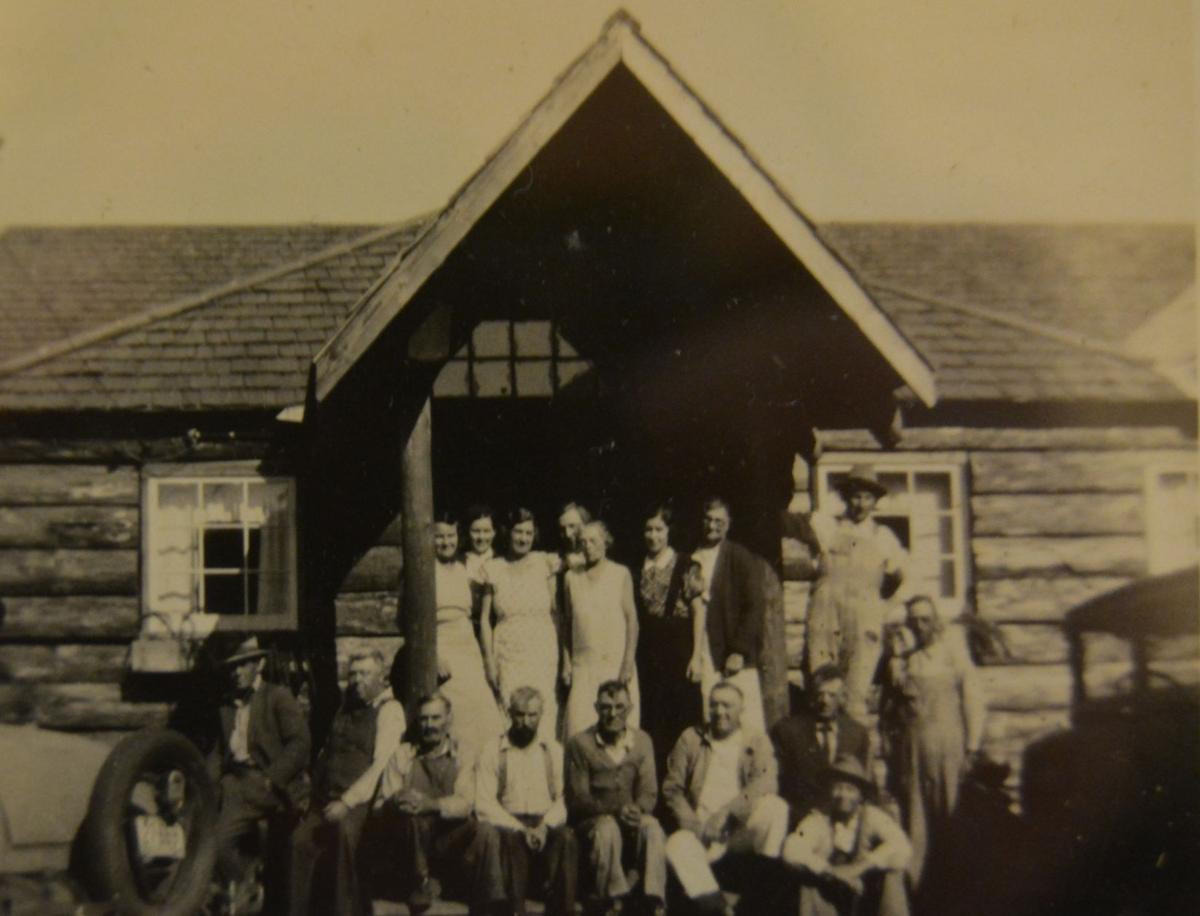 An old photo shows a group of people gathered in front of Marys River Grange.

In the coming weeks and months, the Philomath-based Marys River Grange No. 685 plans to orchestrate a drive to add 20-plus individuals to its membership roster as it looks ahead to the future.

At the same time, the organization will also celebrate a past that dates back to the days of the Great Depression, Babe Ruth and on the local scene, an economy largely based on timber and agricultural.

“I think that I really like the connection I feel to the people that together built this hall and over 90 years have taken care of it and passed it from hand to hand to hand,” Marys River Grange Master Jay Sexton said last week. “It’s my great-grandparents’ generation that made this and all those generations in between kept it going and passed it on.”

The organization plans to celebrate with an open house from 4-6:30 p.m. Saturday marking the 90th anniversary of the local grange’s founding.

Marys River Grange No. 685 was organized March 16, 1927, when 38 residents joined together to form the local chapter. Sexton said granges are assigned numbers based on their date of organization and Marys River was the 685th in Oregon. For example, Philomath Grange No. 13 was one of earliest with its organization in 1872, but the group stopped meeting in 1891.

In 2009, Marys River Grange voted to close due to lack of members. But John Eveland of Gathering Together Farms recruited 50 new members for the next meeting and a vote was taken to remain open. Sexton was one of those members.

“As I looked into the history of the grange, I was impressed with things it had accomplished and its duration and its traditions,” Sexton said, “and I also liked the people that seemed to come and join Marys River Grange who are interested in local sustainable food, healthy food and connections between farmers and consumers, and the resilence and health of rural communities.”

As of last week, Marys River Grange’s membership stood at 43 members. The organization hopes to get the number up to 65. Sexton wants people to understand that the grange is not only for farmers.

“So we’re still a community organization that doesn’t align itself with any religious denomination or any political denomination and it’s a little unique in that way because a lot of other groupings are based on one of those things,” he added.

On a larger scale, Sexton said the National Grange saw a recent overall increase in membership, although in Oregon, the numbers have remained even.

"This year, I would bet money that we’re going to see an increase,” Sexton said. “There’s a statewide effort to increase membership in a real energetic way.”

Marys River Grange’s membership on the whole could be characterized as young with Sexton estimating the average age in the mid-30s. Members pay annual dues of $50. The grange meets on the first Wednesday of each month with a potluck and business meeting.

The historic structure on Grange Hall Road continues to upgrade its facility through various projects.

“The most recent thing is we got a grant from the Benton County Cultural Coalition to do some upgrades on the acoustics of the hall and that includes sound-absorbing along the side, acoustic curtains that will seal off another echoing area, and insulation around the back, top and bottom of the stage,” Sexton said. “We’re also going to make the electrical access for the stage much more usable.”

Other upgrades have included new electrical panels, replacement of the old propane appliances, a new energy efficient hot water heater and new LED lights that use only half the power.

The grange pays recurring bills such as utilities and maintenance out of rental income, which includes things like weddings, memorial services, business meetings and birthday parties. The majority of the membership dues are passed along to support the state and national grange organizations.

The grange sponsors various events and meetings that work toward supported goals, including the hosting of a monthly medical clinic for underinsured farmworkers.

“Gathering Together Farms and groups of volunteer local doctors and nurses are the real engine of it and we are providing the housing for the activity,” Sexton said. “We feel like it’s a really nice thing to offer to the remarkable number of agricultural workers that are local here.”

Sexton sees the grange as a community organization where neighbors can support each other in times of need. As an example, he brought up the massive earthquake that many people believe will hit someday.

“I think it’s smart to have face-to-face connections, think about preparedness, think about food in the local area, because I think everybody’s heard grocery stores have a three-day supply because they’re completely dependent on a fully functional transport system,” he said. “If some disaster interrupts that, it could get weird fast.”

“I think that I really like the connection I feel to the people that together built this hall and over 90 years have taken care of it and passed it from hand to hand to hand."

Marys River Grange Master Jay Sexton looks at an acoustic panel that was installed recently in the hall.

An old photo shows a group of people gathered in front of Marys River Grange.