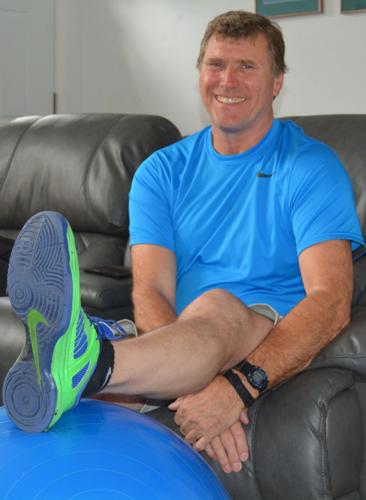 Don Bennett, 59, of Philomath, was the first patient in Oregon to receive a new meniscus implant, which was made available through a clinical trial. 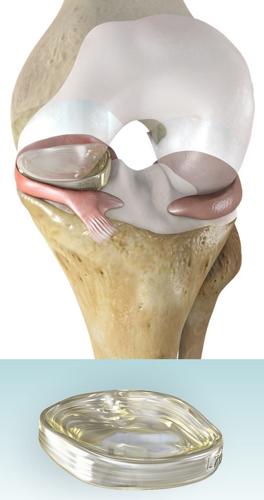 This diagram shows a closeup of the NUsurface Meniscus Implant, bottom, and its location in the knee, seen in the middle of the joint on the left side.

While on trips to Portland to watch his daughter play club volleyball, Don Bennett made the six-block walk back and forth between their hotel room and the Oregon Convention Center eight times over a weekend.

The journey was never easy with left knee pain that has been getting worse and worst in recent years. The following Monday when he returned to work, he could hardly walk.

Thanks to a July 13 surgery, Bennett’s future on his feet looks a lot brighter. He took part in a clinical trial for a meniscus implant product seeking approval from the U.S. Food and Drug Administration. As it turned out, Bennett was the first patient in Oregon to ever receive the implant.

“The weird part was being the first,” Bennett said last week three months after the surgery. “I had nothing to compare it to. My surgeries before this — four of them — were all arthroscopic and on three of them, I walked in and walked out. This one, they opened me up and I was on crutches and it was just much more of a process than arthroscopic surgery.”

“There are limited options for patients like Don, who experience persistent knee pain following meniscus injury and surgery,” Edelson said. “He had exhausted his nonsurgical options. Even though his pain had increased in severity over the last five years, he was not a candidate for total knee replacement.”

The meniscus is a tissue pad between the thigh and shin bones. Once it is damaged, the meniscus has a limited ability to heal. Over 1 million partial meniscectomies — removing the torn portion of the meniscus — are performed in the United States every year, more than the total number of hip and knee replacement surgeries combined.

“Meniscus injuries can be a very painful and debilitating problem, even leading to potential joint replacement at a young age,” Greenleaf said. “It is our belief that the NUsurface implant may allow patients to delay or avoid knee replacement and return to an improved level of activity without pain.”

The implant, made from medical-grade plastic with unique materials, composite structure and design, does not require fixation to bone or soft tissues. It mimics the function of the natural meniscus and redistributes loads transmitted across the knee joint.

Bennett, who will turn 60 later this month, loved basketball while growing up in Philomath and played for the Warriors during his prep years. After graduating in 1974, he played for a year at Southwestern Oregon Community College and would go on to remain active in the sport through city leagues.

Years later after tearing his anterior cruciate ligament in his right knee, Bennett injured his left knee while throwing the football around with his nephew. This time, he had torn meniscus.

“They went in and cleaned it up, took the torn meniscus out and a few years later, I was playing city league basketball and same thing,” Bennett said. “I came down hard on my left knee and tore some more meniscus. So I went in again and they cleaned up the loose stuff again.”

The second injury occurred in the mid-1990s and about a decade later, Bennett began to notice more and more pain with each passing year.

Living in Philomath, Bennett grew up working in the mills before the timber industry began a steady decline. He transitioned into construction and went to work for the City of Corvallis in 1980. He’s worked there ever since and will retire in a few more weeks.

Through the years, he hasn’t exactly gone easy on his knees while doing underground construction and maintenance on sewer and storm lines.

“When you’re young, you’re invincible,” he said. “Knowing what I know now, I wish I could go back because I’d do things a lot different. There were times when we’d have a 5-foot ditch and I needed to get into the ditch to hook the pipe up and instead of taking so long as to actually crawl down the ladder, I’d just jump in. But now I wish I’d hadn’t.”

While listening to the radio this past March, he heard an ad for a new procedure.

“They gave a website to go check out and so I did. I got home and pulled them up on the computer and filled out a short questionnaire about my knee surgeries and I thought, well, I’ll never hear from them,” he recalled. “The next day, they called me and asked me more questions about my knees.”

Bennett met the criteria as a candidate for the trial and a few hours later, Edelson’s office in Tigard called to schedule a first appointment.

Following examinations, more questions and evaluations, doctors ruled out Bennett’s right knee as a possibility for the implant. He had torn his ACL in that knee.

“They didn’t want damaged ligaments in this clinical trial, but my left knee was still a good candidate,” Bennett said. “They did the MRI and everything I needed to have in place was there. I guess I fell through all the hoops and we went ahead and did it. It worked pretty well.”

Clinical trials are ongoing in the United States to verify the safety and effectiveness of the implant.

Sports Medicine Oregon and its affiliate, Oregon Outpatient Surgery Center, is the only site in the state — and one of just 10 sites nationwide — enrolling patients in the clinical trial.

Bennett didn’t hesitate with entering the trial based on what he learned about the product. The implant has been used in Europe since 2008 and Israel since 2011, therefore, he wouldn’t exactly be termed as a “guinea pig.”

“That really was the determining factor for me,” he said. “If this had been, ‘you’re the first one ever,’ I would’ve been a little more hesitant. But since they had been doing it in Europe for so long, eight years, and there were no serious issues with it, then I thought, well it’s worth checking into.”

A motivating factor for Bennett was the hope that he could avoid a future knee replacement. It’s something he’s become familiar with through a family member.

“With the way my knee was deteriorating over the years, I was a candidate that before the end of my life, I would have to have a knee replacement,” Bennett said. “My sister just had one, and man, that’s major stuff, and so I wasn’t looking forward to those days and I thought if this is an alternative that will get me to a point where I will never need that or even postpones it for 10 years, I’ll be in the plus for that.”

Work continues with a physical therapist to rebuild muscle strength, flexibility and extension. Days after the surgery, he wasn’t so sure how it would turn out.

“I’ve always healed pretty well and so after the first week, everything was getting better and the swelling was going down and the pain was going away,” Bennett said. “It was obvious to me that things were going to be OK. But it took a week or two. Over the first couple of weeks, I was like, ‘oh my God, what did I do?’ And then things started to improve and honestly, every day it gets a little bit better.”

As for his right knee, Bennett said it’s a little sore but nothing like he experienced with the left.

“They won’t do knees that have ligament damage because this is for the FDA clinical trial, but down the road, they may say ‘oh yes, we can do it on these.’ … I tore my ACL but the ligament now is tight and it’s not like there’s a lot of slop in my knee. If you have too much movement in your knee, then the disc won’t stay in place properly.”

Bennett, who said he inherits impatience from his father, is focused on winning the battle with his knee.

“I’ve always been pretty competitive and it’s almost like a big competitive game now to see how fast I can recover from this thing,” he said. “It’s coming along pretty good, actually. I’m fairly happy with the way it’s progressing.”

His daughter, Haylie, graduated from PHS this past spring and now competes for Oregon State. Bennett will not only enjoy his future volleyball trips but looks forward to spending more quality time with his wife, Helen, and alone in the great outdoors.

“I want to be able to climb down a river bank and wade out in the water and fish without worrying about my knee giving out, or just hurting for that matter,” he said. “I’m 60 years old … I’m done doing competitive sports-type stuff. I want to spend time with my wife walking around, going shopping.

"Being able to do it without pain is going to be a huge blessing.”

Don Bennett, 59, of Philomath, was the first patient in Oregon to receive a new meniscus implant, which was made available through a clinical trial.

This diagram shows a closeup of the NUsurface Meniscus Implant, bottom, and its location in the knee, seen in the middle of the joint on the left side. 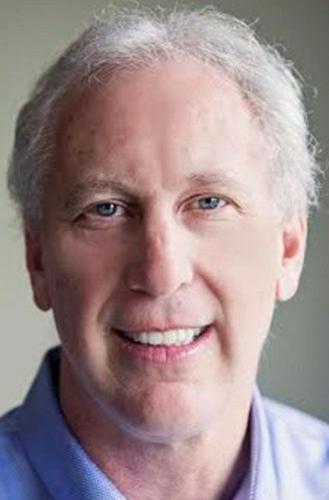 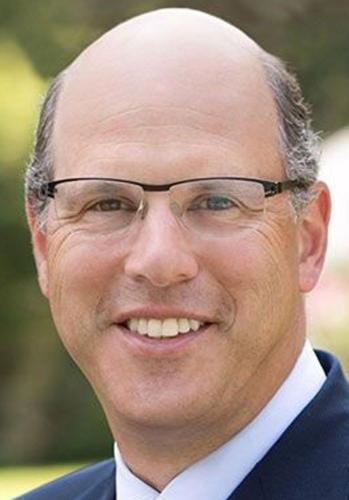