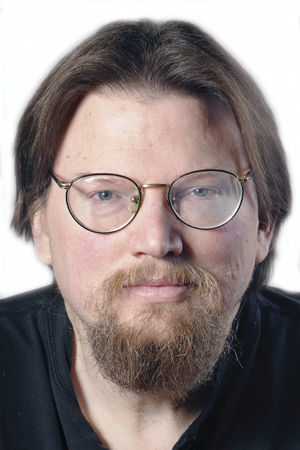 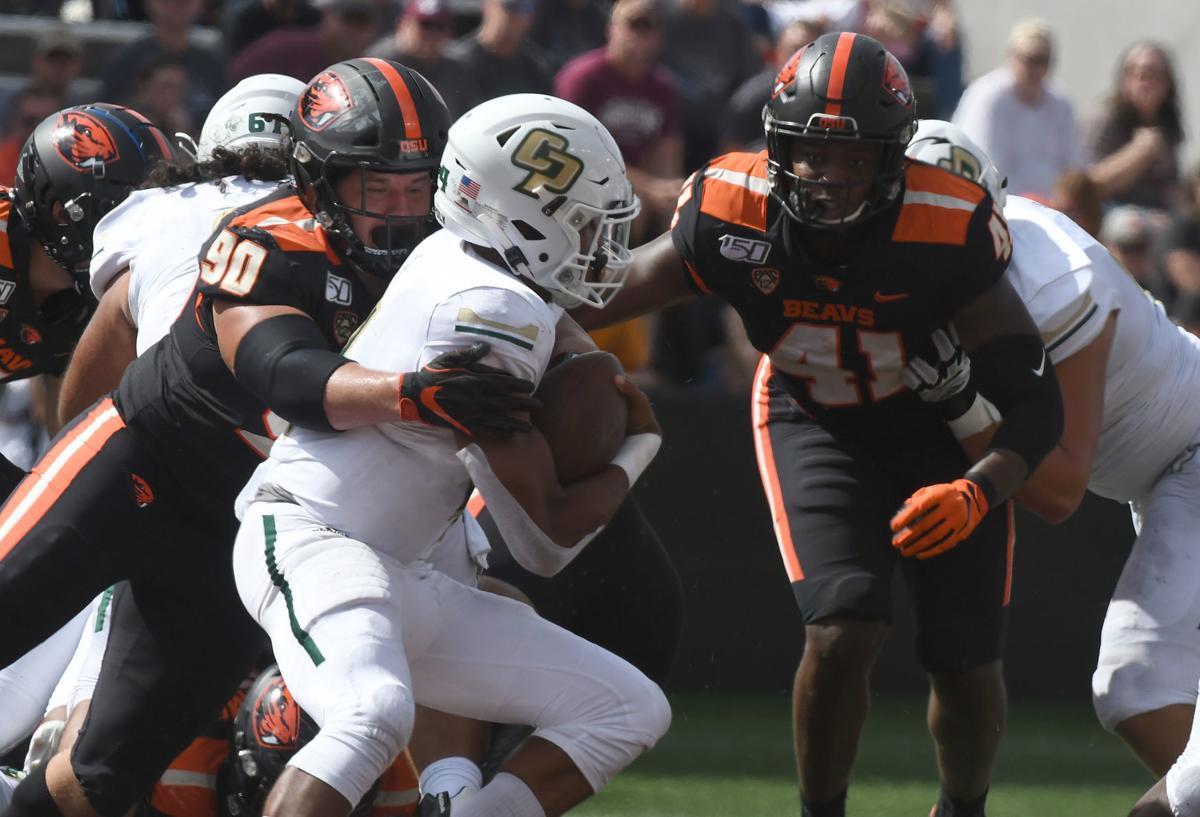 Isaac Hodgins (90) and Shemar Smith (41) bring down Cal Poly quarterback Jalen Hamler (4). The Beavers need to continue swarming to the ball against Stanford this Saturday.

You could call Oregon State’s game against Stanford this Saturday a must-win for either team.

For the Beavers, it’s a chance to start the Pacific-12 football schedule with a win, which has not happened since 2013, when OSU took a 51-48-overtime victory at Utah.

For the Cardinal, it’s a chance to right a foundering ship that has been taking on water the past three games.

A loss could mean a rough road through the rest of the conference schedule.

It may come as a surprise to some, but this is far from a typical Stanford team. Sure, the 2019 version has some elements of those squads we have come to expect as perennial Pac-12 contenders, but there are a few missing parts this season.

The team is still physical, but the numbers have not followed.

The season started on the right foot with a 17-7 win against Northwestern and while nothing would seem amiss to those seeing the score scroll past on television, the Cardinal did lose quarterback K.J. Costello after he was hit while sliding at the end of a run.

Costello missed the second half and had to sit out the USC game with a head injury.

The Cardinal struggled with the speed of USC and Central Florida in 45-20 and 45-27 losses, respectively. Both teams were able to hit Stanford hard through the air, an area that the Beavers have been fairly successful in so far this season.

Stanford could not get anything going on offense last week in a 21-6 home loss to Oregon.

"We opened the season with the toughest four-game stretch in America,” Shaw said. “We’ve got ability. I love the structure of what we’re doing. We need to put guys into position to consistently make plays."

A big problem is a lack of traction in the running game. The Cardinal rank 109th nationally with 115 yards a game on the ground. That’s a big drop from the recent past and it’s obvious that the team has not found a player that can match Bryce Love or Christian McCaffrey.

Starting running back Cameron Scarlett, who played at Central Catholic, would like nothing better than a breakthrough game in Corvallis. Scarlett has been steady, with 321 yards in four games, including two games of 97 yards. He has one touchdown on the ground.

The question is whether the Oregon State defense is able to step up and close down the Cardinal running game and avoid big plays in the passing game.

The Beavers showed they can swarm to the ball in the win against Cal Poly, and more of that will be needed against Stanford.

Playing at home could give the Beavers enough of an edge in a close contest. My prediction? OSU 28-26.

It should be a good one.

Carey is one of six gymnasts named to Team USA for the 2019 World Championships in Stuttgart, Germany, Oct. 4-14.

It’s another step in Carey’s quest for a spot on the U.S. team for the 2020 Tokyo Olympics.

Carey signed a letter of intent with Oregon State in 2017 and all indications are that she will join the Beavers for the 2021 season.

That’s quite a wait for OSU gymnastics fans, but it should be worth it when Carey arrives in Corvallis.

She will give the program an immediate boost and the Beavers are already pushing their way to elite status after a sixth-place finish at the NCAA Championships last season.

Hampton on OSU sports: A rough week for the Beavers

Last week was a rough one for the Oregon State football program.

If there was any concern about a bye week slowing down the Oregon State football team’s momentum coming off its first win of the season, that …

Isaac Hodgins (90) and Shemar Smith (41) bring down Cal Poly quarterback Jalen Hamler (4). The Beavers need to continue swarming to the ball against Stanford this Saturday.