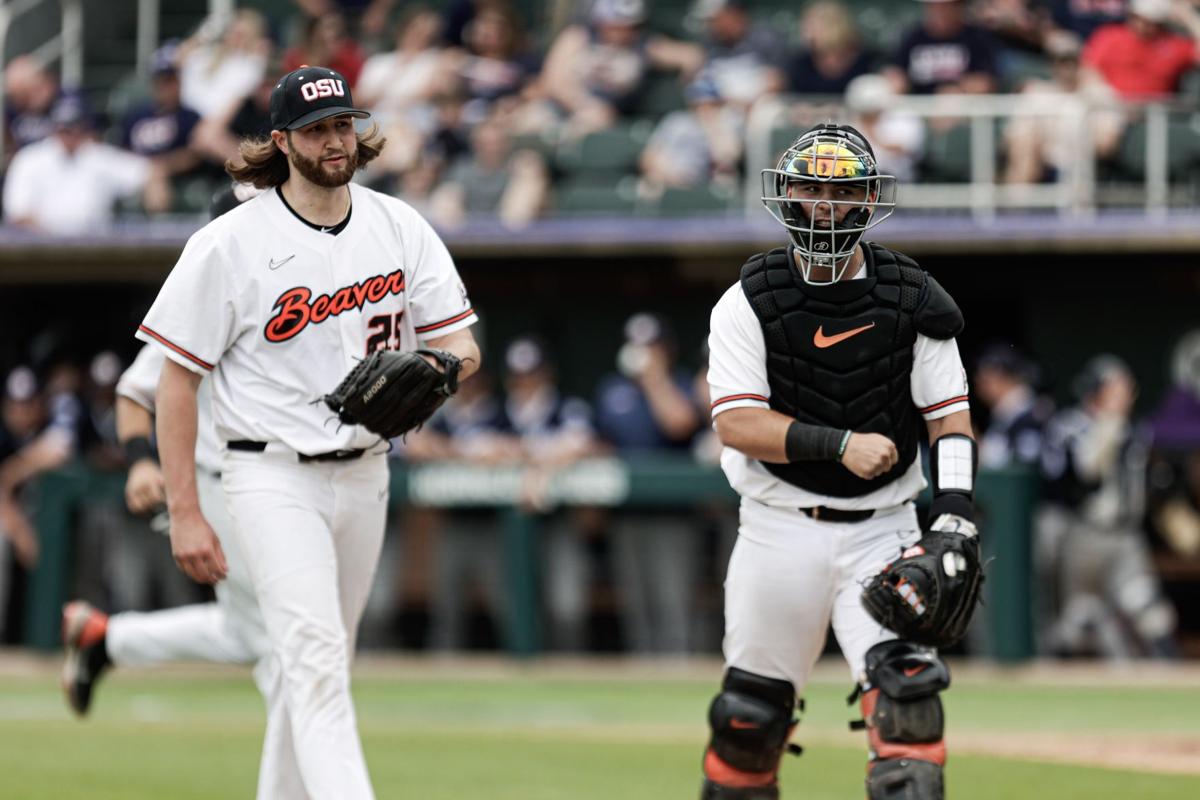 Oregon State pitcher Joey Mundt, left, and catcher Troy Claunch head off the field late in Friday's 6-5 loss to Dallas Baptist in the Forth Worth regional. Mundt had two strikeouts in two innings and Claunch drove in a run in the loss. 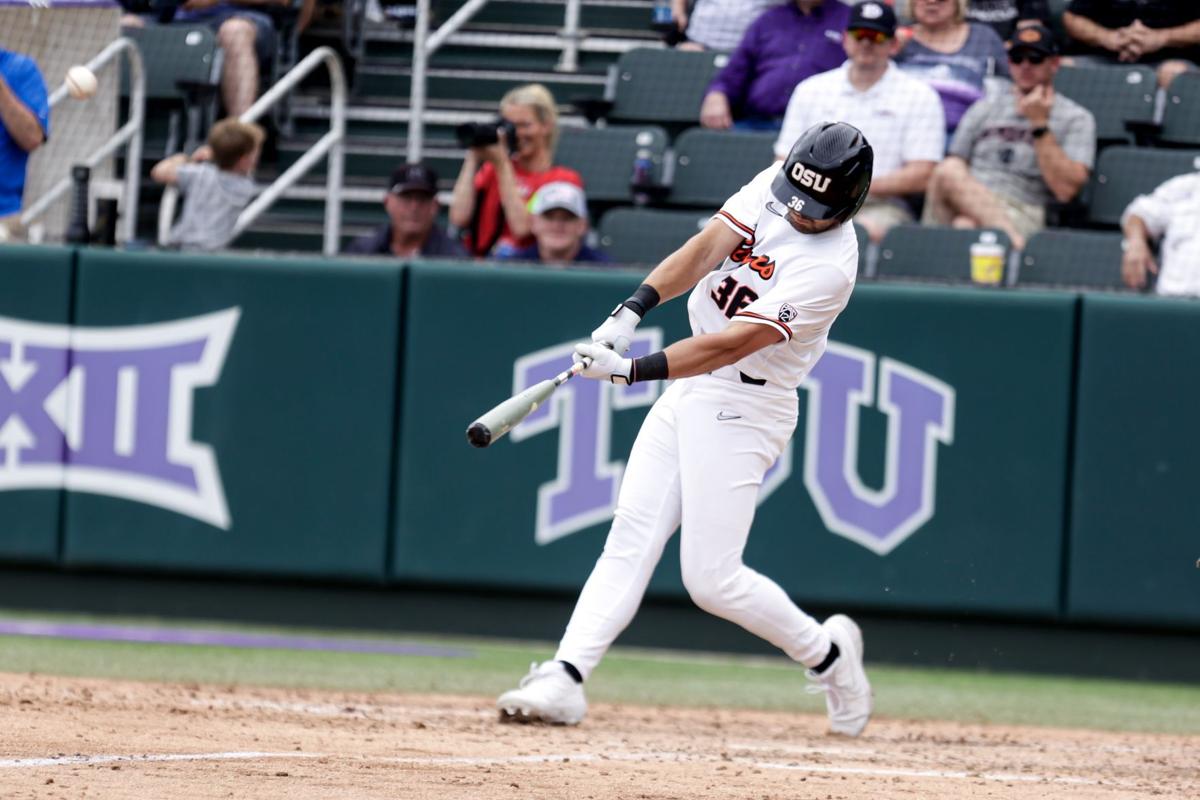 Greg Fuchs belted a three-run home run to get the Beavers within 6-5 in the sixth but they could not complete the comeback. 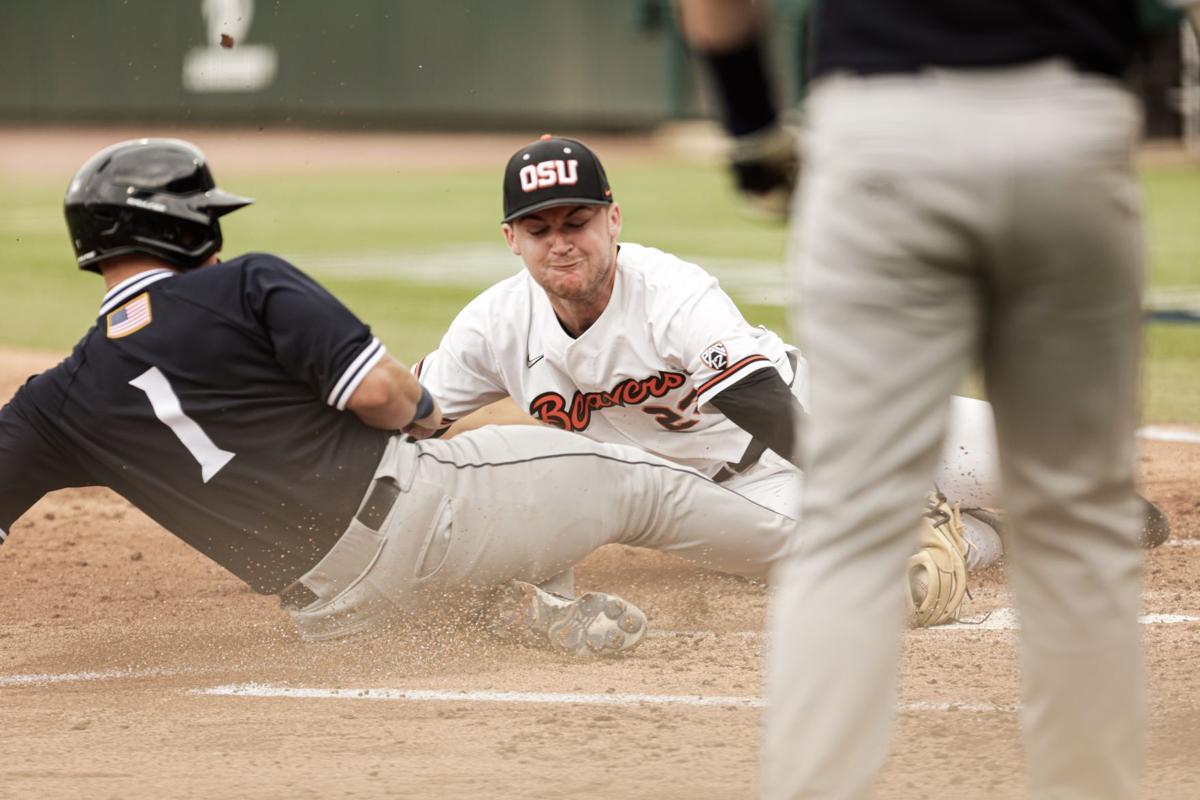 Oregon State pitcher Kevin Abel tags out a Dallas Baptist runner trying to score on a wild pitch in the third inning.

Now, if the Beavers hope to advance past the Fort Worth regional and keep their season alive, they will have to orchestrate their most unlikely escape act yet.

Oregon State fell 6-5 to Dallas Baptist in their postseason opener Friday in Forth Worth, Texas, and came agonizingly close to reeling off yet another dramatic win. But a disastrous start to the contest was too much for the No. 2-seeded Beavers to overcome, and now they will spend the rest of their stay in Texas playing to keep their season alive.

“For those of us who are older and who have been down this path before, we’re no stranger to coming back to the ballpark with our bags packed,” Oregon State coach Mitch Canham said. “We use it as motivation. I’ve seen these guys time in and time out, when stuff is pushing them against the wall, they fight back and they do it together.”

Oregon State will face No. 4 seed McNeese State, a 12-4 loser to top seed TCU on Friday, in an elimination game at 10 a.m. Saurday. The winner stays alive and will play Sunday while the loser heads home.

Freshman Cooper Hjerpe is expected to get the starting nod for the Beavers.

If Oregon State is looking to draw a positive from Friday's result, it’s that they rallied back and clung tight after appearing dead in the water during the first five innings.

The Beavers could not have imagined a worse start to the day. Kevin Abel, Oregon State’s ace and the hero of the 2018 College World Series, battled through one of his worst outings of the season. Abel walked eight of the 18 batters he faced and the Beavers trailed 3-1 when he exited after the third inning.

Abel flashed strikeout stuff early, but then lost command and walked five batters in the third inning. When he did find the strike zone, Dallas Baptist punished him.

Patriot’s cleanup hitter Cole Moore smashed a two-run homer in the first on a belt-high changeup.

“We had a good scouting report on (Abel),” Moore said. “We knew what our approach was going into the game. We knew he was heavy with his off-speed. I got to 2-0 and I knew he was gonna throw me an off-speed for a strike. I sat on that and hit it hard.”

And yet, Abel held Dallas Baptist to just three runs and managed to escape two bases-loaded jams to keep the Beavers in contention.

“He struck out the first hitter of the game and was attacking them with low-90’s heaters,” Canham said of Abel. “I can’t put a finger on why we were missing the zone. We were getting too deep into counts and they put together some great at-bats. They were well balanced and caused his pitch count to climb. … Fortunately we have a lot of guys in the ‘pen who were ready to rock and roll, and we have an offense that’s relentless.”

Reliever Will Frisch came on for the Beavers in relief of Abel and the Patriots taxed him for three more runs over 1⅓ innings.

While the Dallas Baptist offense was racking up runs, their starting pitcher, Dominic Hamel was keeping the Beavers’ bats quiet. Hamel, one of the top starters in the nation, navigated his way through five relatively stress-free innings and held Oregon State to two runs — a Troy Claunch RBI groundout, and a solo homer from Ryan Ober.

In the sixth, though, the Beavers finally solved Hamel. He issued back-to-back four pitch walks. Then, with two outs, Greg Fuchs launched a three-run homer deep to right-center that cut the Dallas Baptist lead to 6-5.

A sophomore outfielder who started just 16 games during the regular season, Fuchs became a mainstay in the Oregon State lineup during the the Stanford series last weekend and did enough to earn a starting nod in the postseason opener.

In his third at-bat, he ambushed Hamel on a first-pitch fastball and sent it sailing deep beyond the outfield fence.

“He was throwing me fastballs my first two at-bats and I was taking the first pitch,” Fuchs said. “I knew he was gonna come with one again. Thankfully, I just jumped on it right away, early.”

That was as close as the Beavers would get, though. They put runners on second and third in the eighth, when Fuchs stepped to the plate again and laid down a perfect sacrifice bunt. Ober followed by hitting a laser down the third base line that was caught for an out, and Andy Armstrong grounded out to end the inning.

In the ninth, Dallas Baptist closer Kragen Kechely retired the Beavers in order to end the game.

NBA plans to start the new season in October

OSU baseball: What to know about the Fort Worth regional

Oregon State pitcher Joey Mundt, left, and catcher Troy Claunch head off the field late in Friday's 6-5 loss to Dallas Baptist in the Forth Worth regional. Mundt had two strikeouts in two innings and Claunch drove in a run in the loss.

Greg Fuchs belted a three-run home run to get the Beavers within 6-5 in the sixth but they could not complete the comeback.

Oregon State pitcher Kevin Abel tags out a Dallas Baptist runner trying to score on a wild pitch in the third inning.