OSU baseball: Beavers go through transition but not much has changed
Share this
×

It was just over 19 months ago when Oregon State players were able to dogpile at TD Ameritrade Park in Omaha, Nebraska and celebrate the program’s third national championship.

A few months later, Pat Casey, who collected his 900th victory with the Beavers in that title-clinching game, stepped down as coach.

Pat Bailey, Casey’s longtime assistant, filled in on an interim basis last year and the Beavers received a top 16 seed and hosted a regional for the third straight season.

But Oregon State lost both games and the season came to a halt quicker than many expected.

Less than two weeks later, OSU announced the hiring of former Beavers catcher Mitch Canham as the program's new coach. While Bailey remained on staff, Andy Jenkins and pitching coach Nate Yeskie are no longer wearing the orange and black.

In just over two weeks, Canham will lead the Beavers into the 2020 season.

While there’s no doubt the program has gone through plenty of changes on the coaching staff and with the players making up the team, it’s not all that different in the clubhouse.

“It seems from the outside like a lot of change, you know with all the coaches and stuff like that, but in a locker room the culture is still the same, we're still going about our business the same way,” senior infielder Andy Armstrong said. “Obviously we've lost some great talent over the years, but we’ve got some great talent coming in to fill in those shoes so I'm excited to see what we can put together this season.”

Senior pitcher Jake Mulholland had a similar feeling and also tried to embrace the change in a positive manner.

“I mean we've had a lot of change but you know a lot of these coaches have been around the whole time,” he said. “And for me, I've got to experience three different coaches so I've gotten to take bits and pieces from all the different coaches. I'm kind of fortunate because I feel like I've gained some knowledge and new experiences and how to handle certain situations that if I had one coach the entire time I might have not gotten. So I think of it as I'm fortunate to have experienced that.”

Armstrong said the camaraderie of the 2020 club mirrors or exceeds the others of the past few seasons.

“This team has got to be one of the closest teams that I've been a part of here so I'm excited,” he said. “… Just our bond, we get along so well in the locker room and no matter what we're doing. Instead of being in little groups within the team we're all like just one big family. Maybe that's come from coach Canham preaching that we're family and all and we've taken it to heart. So I think that’s where it stems from.”

Added Mulholland: “All the guys are here for one another, we're playing for each other, we're motivated, we compete very well and we have a ton of energy. I mean, I don't think we're going to miss a beat.”

The Beavers open the season in Surprise, Arizona, again this year but will play just four games instead of the eight they typically do over two weekends.

A trip to perennial power Mississippi State for a three-game series in Starkville comes next.

The Beavers, who have been regulars in most of the polls the past three seasons, are No. 25 in the coaches poll; they were not ranked in four other polls.

“It doesn't really matter to us you if we’re one or 25th or not even ranked, we’ve got to go about our business the same way,” Armstrong said. “The polls don't mean anything, they're just drama, they're just something for fans to get behind and everything like that.

“It is exciting, but at the end of the day, we’ve still got to play the games. We're not going to be determined on paper and we're going to have to go out there and play everybody the same way and then the better team is going to come on top.”

Mitch Canham understands the history of the past and knows the uncertainty of the future, but he tries to live in the present as much as possible.

Kevin Abel was the star of the 2018 College World Series for the Oregon State baseball team.

OSU baseball: Canham excited for "the only job I’ve ever really dreamt of"

From the time Mitch Canham stepped foot on the Oregon State campus in the fall of 2002, he knew it was the place for him.

Oregon State’s baseball season kicks off Friday afternoon in Surprise, Arizona, with little or no fanfare outside of the Beavers’ neck of the woods. 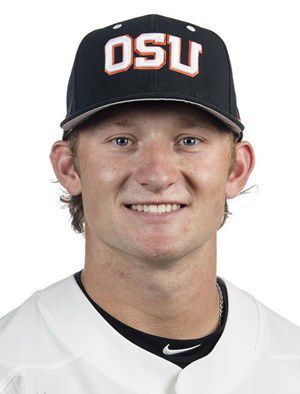