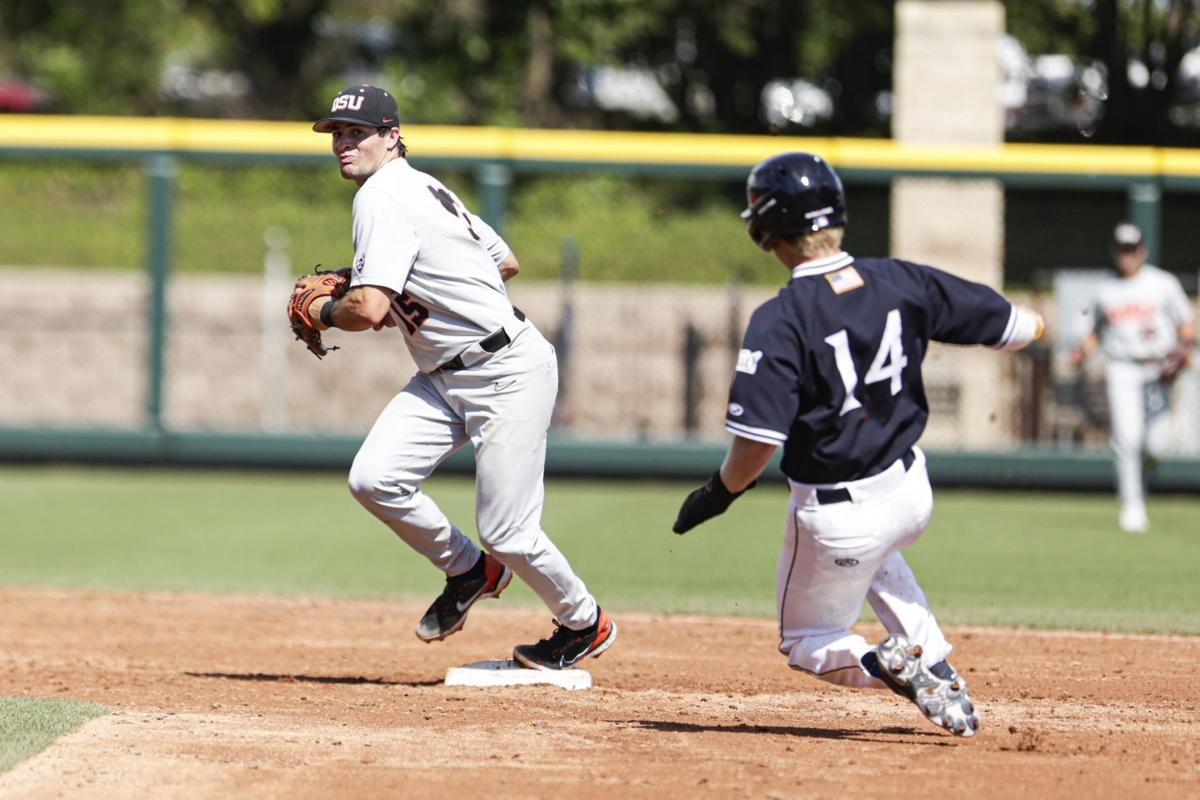 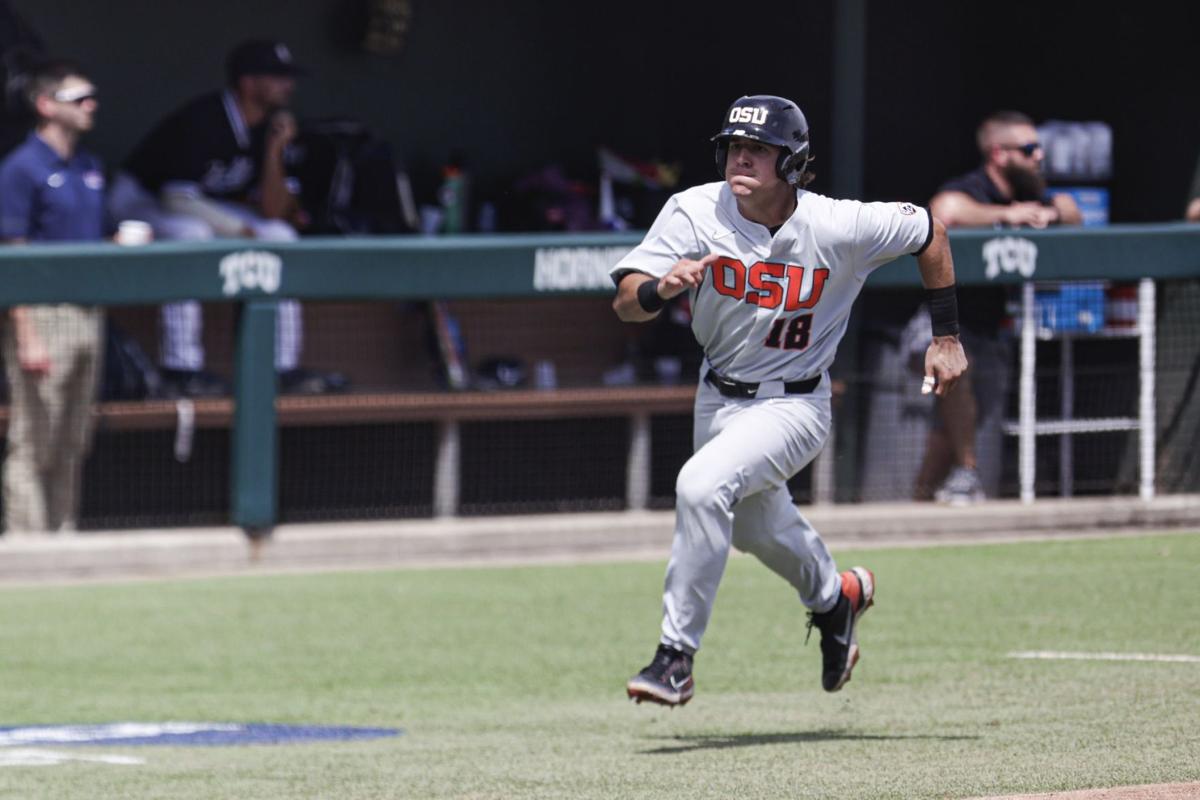 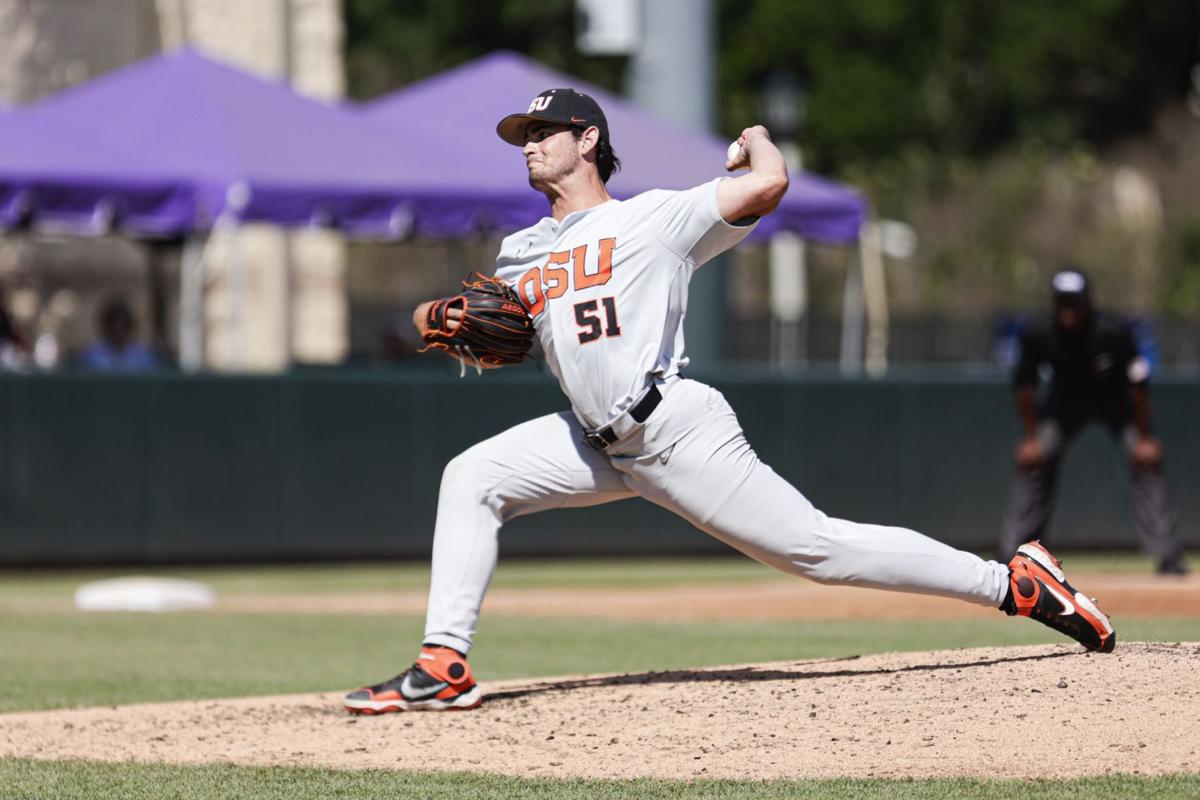 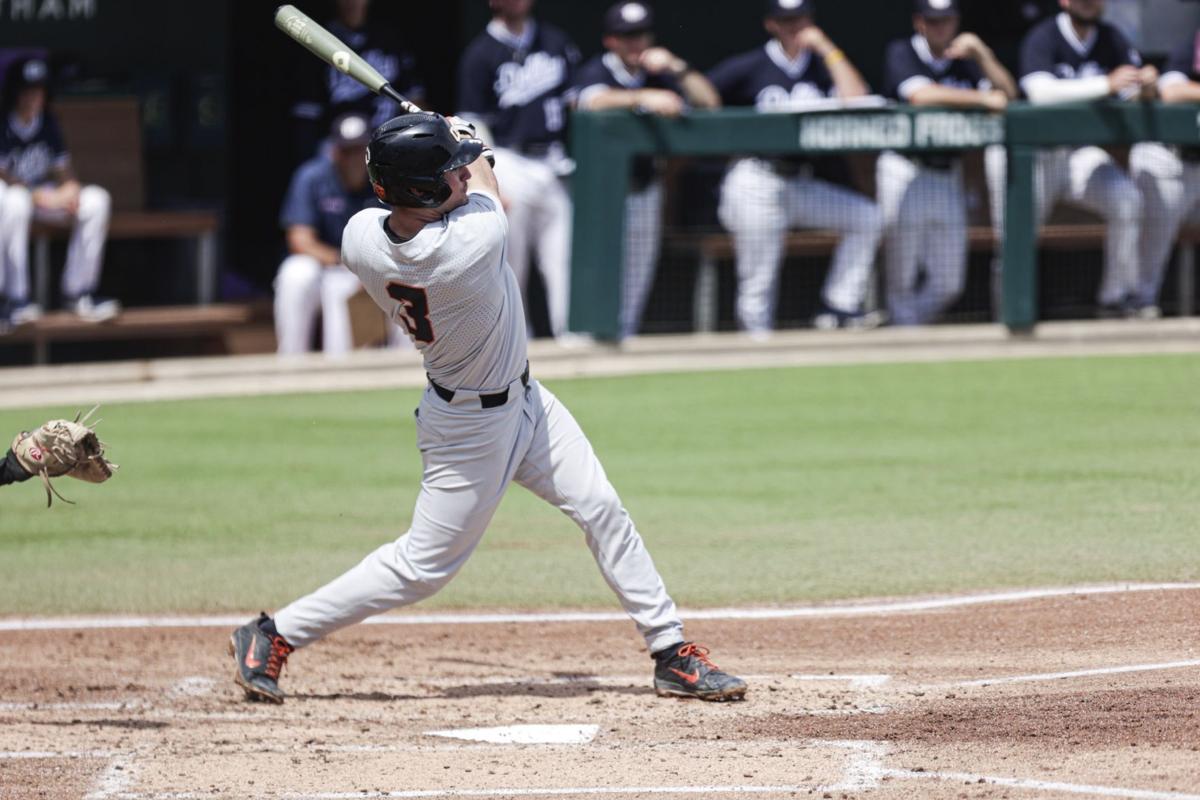 Matthew Gretler went 2-for-3 for the Beavers Monday and drove in a run in an 8-5 loss to DBU. 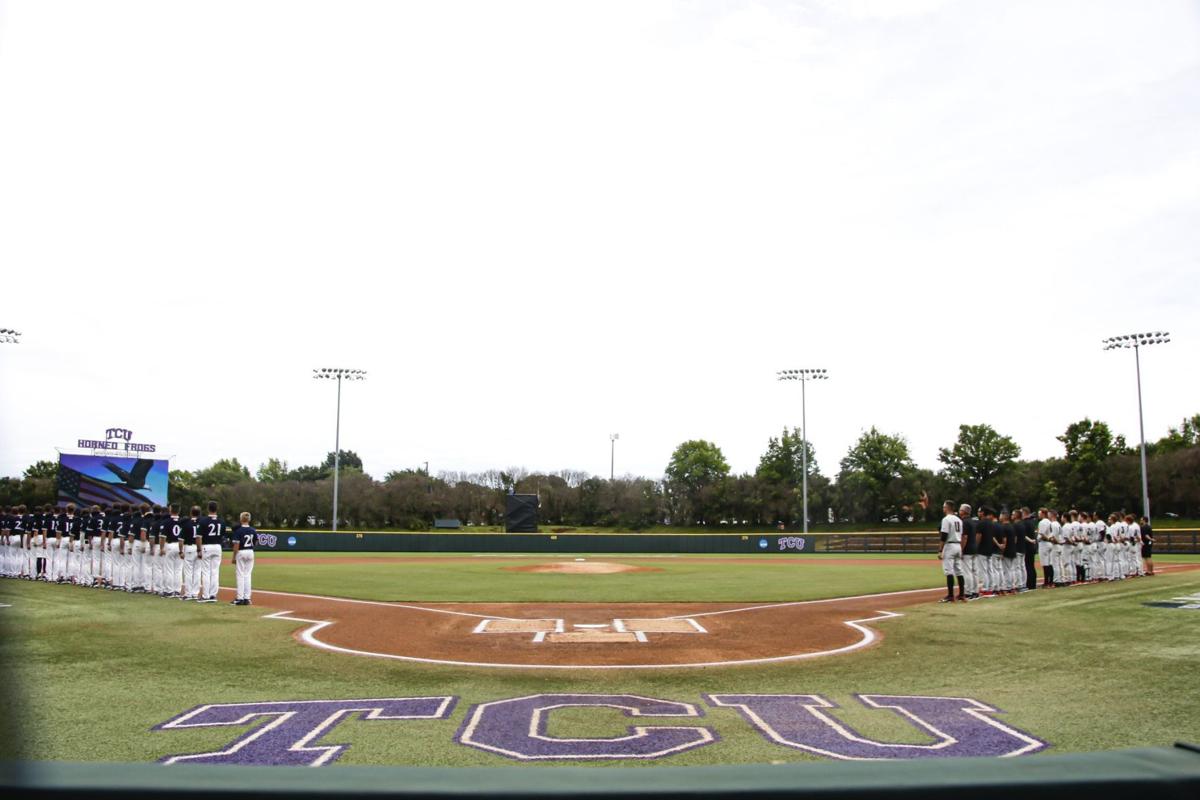 Oregon State spent the past three days navigating its way through a seemingly endless wave of do-or-die scenarios. Time and time again, the Beavers found a way to extend their season in dramatic fashion.

With their postseason lives on the line once again Monday, they nearly pulled off the spectacular, but came up agonizingly short.

The Beavers fell 8-5 to Dallas Baptist in the final game of the NCAA Fort Worth baseball regional at Lupton Field, bringing an end to their season and stopping a memorable postseason run in its tracks. Oregon State finished the season 37-24 and fell one game short of reaching a super regional.

“These guys aren’t scared to have their backs against the wall,” Oregon State coach Mitch Canham said of his team's run through the region. “I think it motivates them. They’re warriors. When things get tough, they’re gonna lock in even more and fight until the very end.. Right now it hurts. But anytime the pain starts to hit, Beavers will endure.”

In order to make it to Monday, Oregon State had to reel off three straight wins in a span of two days after the Beavers’ lost their postseason opener to DBU Friday. In the past five years, only five teams had dropped the opening game of a regional and still advanced.

For much of the afternoon, it appeared the Beavers might become the sixth.

Oregon State held a 5-0 lead at the start of the sixth inning, but the Patriots roared back with eight unanswered runs. The back-breaker came in the seventh, when DBU third baseman Andrew Benefield launched a two-out grand slam that gave the Patriots a 6-5 lead.

Surrendering untimely walks has been the Beavers’ Achilles heel all season, and free-passes, combined with three DBU homers, spelled doom for them this time around.

Oregon State’s talent-rich bullpen carried the Beavers through the first four games of the regional, but it was running on fumes Monday. The weekend marathon of games left the Beavers with just a handful of fully rested arms, and every pitcher that surrendered a run Monday had pitched at least once in the past 48 hours.

“There’s not one guy who didn’t say, ‘I’m ready for the baseball today if you need me,’” Canham said.

With all three weekend starters unavailable, and de-facto No. 4 starter Will Frisch also out of contention after having thrown Sunday, Canham called on Jack Washburn to make his fifth start of the year. The freshman right-hander tossed two innings, struck out one and walked two against a stacked DBU lineup.

Meanwhile, the Oregon State bats gave him plenty of offensive support early on. The Beavers took a 1-0 lead in the second when Ryan Ober reached with a leadoff single and then moved to second on Andy Armstrong’s sac-bunt. Matthew Gretler followed with an RBI single to open the scoring.

One inning later, Oregon State opened up a commanding lead. Justin Boyd cracked a leadoff triple, and Troy Claunch followed with a sac fly to make it 2-0. Garret Forrester and Greg Fuchs followed with back-to-back singles, and then Forrester scored on a throwing error to third to make it 3-0.

Armstrong, Gretler and Kyle Dernedde followed by drawing three straight walks to bring home another run, and Armstrong later scored on a wild pitch to make it 5-0.

It figured to be smooth sailing from there for the Beavers. As soon as Washburn encountered trouble in the third, Chase Watkins came on in relief and tossed three scoreless innings to send them into the sixth still leading 5-0.

But the Patriots got on the board in the sixth when Ryan Wrobleski tagged Oregon State reliever Bryant Salgado for a two-run homer, his second longball against the Beavers in as many days.

Nathan Burns struck out six of the seven batters he faced Sunday during two stellar innings. But he came back on short rest Monday and the Beavers immediately paid the price. Burns struck out the first batter he faced, but then walked three of the next four.

Joey Mundt, who also threw two crucial scoreless innings Monday, came on to replace Burns in an effort to get the Beavers out of the jam.

Benefield crushed the first pitch Mundt threw for a towering grand slam that gave the Patriots a 6-5 lead they would not surrender.

“There was never any doubt in their minds,” Canham said of his relievers. “Never any hesitation. Never any fear. Just go out and compete… You’re just trying to pay attention. You don’t want to put these guys in a bad spot trying to do too much. Especially with the amount of times they’re throwing. Unfortunately it just didn’t work out today.”

Cooper Hjerpe, who started for Oregon State Saturday and threw 93 pitches, came on in relief of Mundt to help Oregon State escape further damage. But the next inning, DBU center fielder River Town hit a towering homer to right that gave the game its final score.

Oregon State brought the tying run to the plate in the top of the ninth after Garret Forrester walked and Ryan Ober ripped a two-out single.

But DBU ace Dominic Hamel, who started against Oregon State on Friday, came out of the bullpen to record the final out of the game and close the door on the Beavers’ season.

“I just think about the older guys that have gone out there,” Canham said. “Jake Mulholland, Mitchell Verburg, Joe Casey. Guys like Preston Jones, Andy Armstrong, a handful of others. Your heart goes out to them. You think back on that last day you wore the Beaver uniform and how difficult it was for me to take it off. But in the long run, you know you’re a part of something special for a long time.”

All season long, Oregon State’s talented group of young players have been stepping up in the biggest moments and finding a way to deliver.

Oregon State’s season reached a sudden, unceremonious end earlier this week, with the Beavers coming agonizingly close to clinching a super re…

Matthew Gretler went 2-for-3 for the Beavers Monday and drove in a run in an 8-5 loss to DBU.