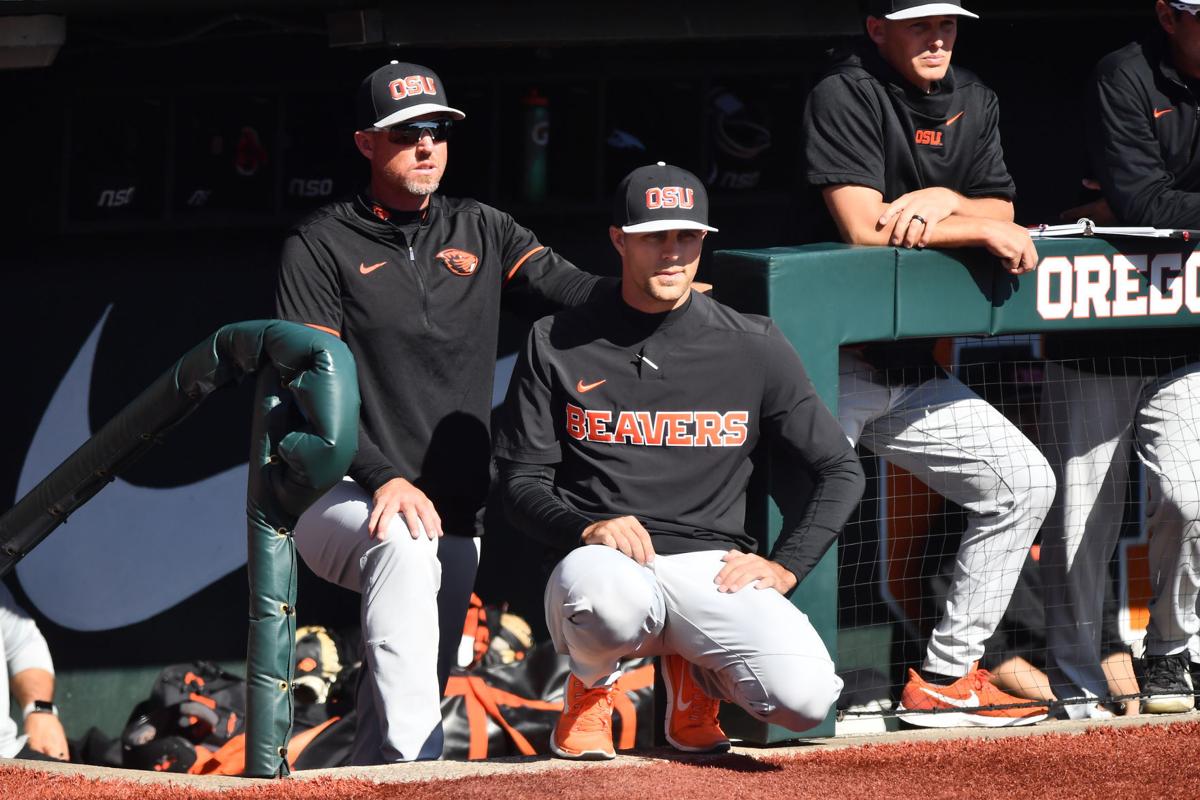 Mitch Canham, center, said his transition from minor league coach to Oregon State's coach has been a smooth one. 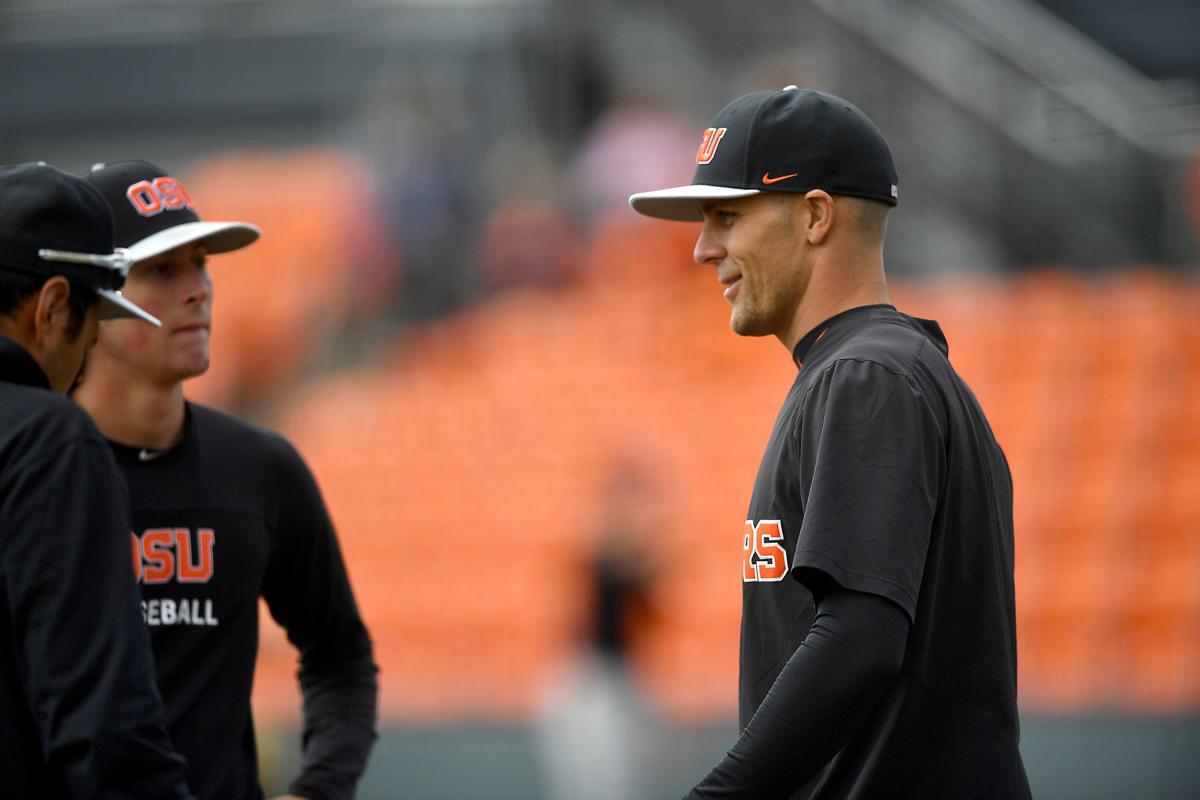 First-year Oregon State baseball coach Mitch Canham liked what he saw from his players during fall practice, especially the way they competed and pushed each other.

Mitch Canham understands the history of the past and knows the uncertainty of the future, but he tries to live in the present as much as possible.

That is how has approached the first few months as Oregon State’s new baseball coach.

“If you're worried about the future or you're stressing about the past then you're not focusing on the present,” he said. “And that's where you should be, that's how you move forward.”

Canham, who helped lead the Beavers to back-to-back College World Series titles as a catcher in 2006 and 2007, finally had a chance to catch his breath some last Thursday morning.

His staff is complete, the team had completed it's fall practices and the first recruiting class has been signed.

It’s been a whirlwind for sure, but a pretty smooth transition overall for Canham, who was coaching in the Seattle Mariners’ organization before accepting his dream job at Oregon State in July.

“I feel very comfortable being here,” Canham said. “I lived the culture, and it transformed me when I went into playing and coaching. So I felt like I still have that core foundation of set me in the right direction and brought me back into this. So I don't feel like it's been too bumpy.”

Canham’s first time coaching at the collegiate level hasn’t been all that different than the time he spent with the Mariners, where he served three and a half seasons before taking the Oregon State job. He said he was fortunate to work for an organization that cares about the players as much off the field as they do their production on it.

He was able to work with a number of players for more than just a year or two, much like he will at Oregon State.

“As far as the intent of which you care for people I felt like we're doing the same thing,” Canham said. “This is why I love to coach, to teach, love to serve. You know I look at myself as just asking the big man upstairs what he wants me to do, where he wants me to be and how I can better serve Him and the people.”

Here’s a look at how the process has gone so far. The Beavers return to practice in January and open the season Feb. 14, 2020 in Surprise, Arizona, against Gonzaga.

When Canham was chosen at coach, it meant there was likely going to be some staff changes. While Pat Bailey, who served as interim coach last season, has remained on board, the Beavers did lose both Andy Jenkins and pitching coach Nate Yeskie.

Both were instrumental in the Beavers’ success as they have been a perennial national player and won the 2018 national title.

Jenkins proved to be the odd man out as teams can have just three paid assistants. Ryan Gibson, who was an assistant coach last season while Bailey served as the interim, remained on staff as did Bailey, taking up two of the three assistant spots.

Yeskie agreed to stay on but later accepted a position at Arizona.

After taking some time to interview candidates, Canham decided on Rich Dorman to replace Yeskie. Canham described Dorman as the “perfect” person to be on the Oregon State staff.

“When you say is that guy a Beav? Rich is a Beav. He already shows up and goes to the basketball games. He’s a super fan. He has that love for the program and the athletic department and the community.”

Wong, a teammate of Canham’s on the 2007 national championship teams, spent 10 years in professional baseball and will work with the infielders.

Robertson, who spent 11 years in professional baseball after playing a season with the Beavers in 2008, will work with the outfielders, on base running, bunting and hitting.

“We're talking about two of the most passionate people that you can have on a coaching staff,” Canham said. “And energy. D-Rob's got big energy. And I love his want to help out. He's always around and you tell him what you need and he's going to get it done.”

It may have taken Canham a little time to ultimately complete the staff but he was never concerned about rushing the process.

“Everyone might be panicking, but we understand it's a process,” Canham said.

When Canham was hired, some may have questioned his ability to recruit having never been in that position. But having worked with high school athletes in Washington during his offseasons over the year and coaching some of the best college players while in the Mariners’ organization, identifying talent hasn’t been an issue.

“Really you see how small it is when you’re out there, oh I know you and before you know it there’s a lot of connections,” he said.

In fact, playing for someone who has coached in professional baseball might be a draw.

“I know what those guys look like and I can look at our program right now and say I can see those guys playing professional baseball and see these guys making it to the bigs,” Canham said. “So going out there and watching talent, I think my eyes were prepared for that.”

Talent isn’t the only factor involved in determining which players will don the orange and black.

“I know who we want here,” Canham said. “I know the kind of people that we, we have here, and that we need here to continue this tradition and I will be very protective of this program.

“So just because you’re really good doesn't mean you’ll be here. I'd rather find the right people. So people that are competitive in the classroom, are going to get the job done. We’re building men here. And so after you find the skill then you make sure the academics are going to work and then start pouring into the makeup.”

It’s a relationship that will continue to grow from the first day and never ends, Canham said. So they better be in for the long haul.

“That's what we talked to recruits about, you come here this is a lifetime thing, this is marriage,” he said. “You’re a Beav and you’ll always be a Beav. And you start to find out when you ask these guys these questions, you know, what’s your vision? What do you see yourself doing? Do you want to be a part of the family?”

Canham didn’t want to make any assumptions about the players so he allowed them to showcase their skill sets throughout the fall.

“I wanted to see what they can handle,” he said.

In doing so, Canham came away impressed by the talent and competitiveness of the group and how they pushed each other and how hungry they are to be successful.

Defensively he saw players making all the plays despite having them play multiple positions.

Offensively, he put the players in numerous situations to see how they would adapt, which in turn put the pitchers in various game-like situations.

“We tried to try to increase the noise,” Canham said. “And at the same time teach them how to quiet the noise. I think they did a good job with it, and we started to see which guys really enjoy that competitive level.”

Canham also liked what he saw out of his pitchers.

“A lot of the leadership,” Canham said. “Our older guys and even our younger guys coming in and being very responsible with their work ethic.”

Sometimes, however, that competitive nature can be a detriment to growth and development and Canham wants his players to understand how to take the necessary breaks.

He wants them to know that after playing a college season, the summer and now the fall that it is OK to take some time away to rest.

“So just being into this I'm trying to step back and look at the big picture and make sure that we're doing our best to take care of the student-athletes’ physical and mental health,” Canham said. “That's going to help them really push through the start of the season and the meat of the season and the finish is where you really, really want to get to.”

Mitch Canham, center, said his transition from minor league coach to Oregon State's coach has been a smooth one.

First-year Oregon State baseball coach Mitch Canham liked what he saw from his players during fall practice, especially the way they competed and pushed each other.