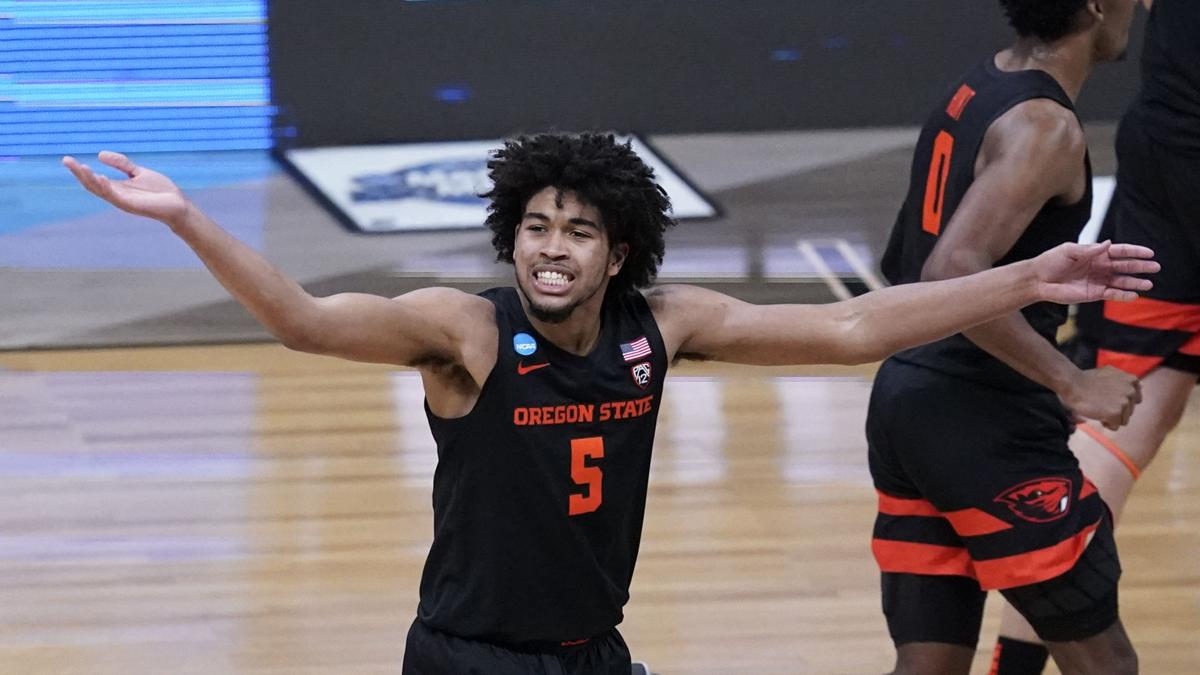 After Oregon State's postseason run, Ethan Thompson got to work on improving his skills and body with the hopes of being a professional basketball player. 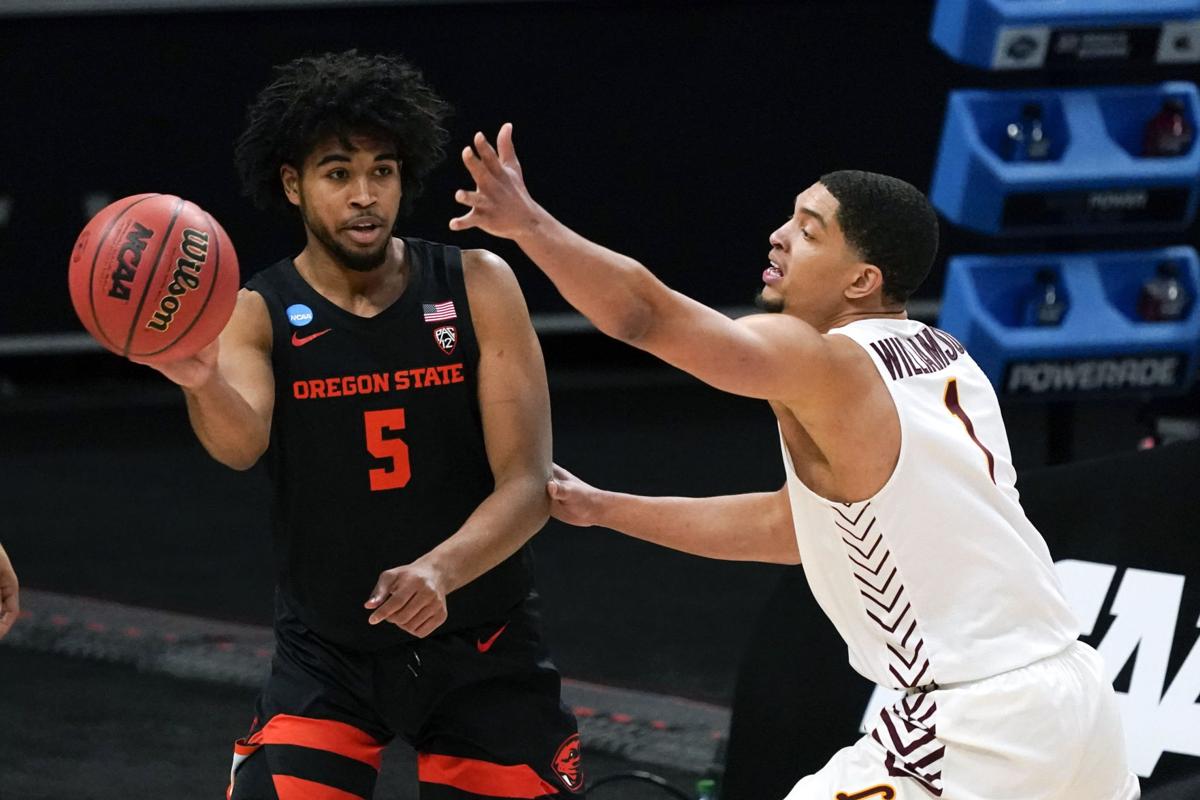 Thompson (5) has been training and working out in his home state of California to prepare for professional basketball.

Thompson, who helped the Beavers reach the NCAA Elite Eight this past March after an improbable run that included six straight postseason wins, has spent countless hours since the end of the college season working in his home state of California on his skills and his body.

On Wednesday he had his third NBA workout, going through what he described as some “fast-paced stuff” with the Golden State Warriors following time spent in previous weeks with the San Antonio Spurs and Atlanta Hawks.

The 6-foot-5 Thompson also has upcoming workouts with the Detroit Pistons and Minnesota Timberwolves.

Thompson isn’t projected to be taken in the two-round draft, but that hasn’t stopped him from putting his best foot forward while seeking out help and advice from those he believes can get him where he wants to be.

He’s worked out with Pro’s Vision, an organization led by Darren Collison, a UCLA alum who played 10 years in the NBA. Thompson said his time spend there has been a good experience.

“Learning from somebody like DC, somebody who has played in the NBA for a long time,” Thompson said. “He has great knowledge of the game and I feel like he helped me with some things with my shot mechanically, and also understanding different concepts in pick-and-roll and all that different type of stuff.”

In beginning his professional career, Thompson has two good assets in his father Stephen Thompson, who played in the NBA and overseas, and his older brother, Oregon State alum Stephen Thompson Jr., who is currently playing in Italy.

But throughout his playing career, he’s also leaned on Dane Suttle, another former professional player who was an assistant to Stephen Thompson at Cal State Los Angeles before Stephen Thompson joined Wayne Tinkle’s Oregon State staff in 2014.

Ethan Thompson says he and Suttle talk often and that Suttle has been a mentor in helping him through his current process.

Thompson is working with UPB through Thompson’s agency, BDA Sports. He says Turner and his staff have provided a good balance of structure of freedom in his training at their Santa Barbara hub.

“Packie’s a great dude. He has a great group of guys around him and they come in every day ready to work,” Thompson said. “But they also help me to be creative throughout the drills and I think that’s a skill getting into the next level, working on creativity.”

Ravi Patel, a former Sweet Home High School athlete who worked under head coaches Craig Robinson and Wayne Tinkle in the Oregon State men’s basketball program, is a trainer at UPB. Patel was a student manager under Robinson then promoted to a graduate assistant coach/video coordinator by Tinkle in 2014.

Thompson says preparing for professional basketball has included “everything,” notably ball handing and shooting as well as nutrition and reducing his body fat percentage.

Looking at his individual game and skills, he said he believes they will fit well with today’s NBA style.

“I think I like to play at a faster pace. I think the NBA will allow that to happen. There’s a lot of possessions in an NBA game,” Thompson said. “Also, from watching the playoffs and other NBA games, I see that the court is a lot more spread so you have a lot more room to operate. Whereas in college, you might face a lot of zone and everybody’s gapped up. So I think I’ll like that as well.”

Oregon State’s extended season created added exposure for Thompson, who averaged a team-best 15.7 points and 3.9 assists along with 4.0 rebounds while shooting 40.4% overall, 32.9 on 3-pointers and 81.3 on free throws for the season.

He was named to the all-Pac-12 first team, Pac-12 all-tournament team and the all-NCAA Midwest Region team. He finished his time at Oregon State seventh in career scoring and third in assists.

Thompson and the Beavers turned up the defense in the NCAA tournament, holding four opponents to a combined 31.6% from the floor. Individually, Thompson averaged 18 points, seven rebounds and four assists over the final four games.

“I think it helped definitely, being able to prolong my college career by a handful of games,” he said. “Especially as teams started to drop off, people were kind of forced to watch Oregon State so I think that was pretty good.”

Oregon State director of basketball operations Joey Petschl has left the program. He's moving to his native Seattle to be closer to family.

Petschl served three years as the Beavers' director of player personnel and the past two seasons as director of operations. He previously worked for Tinkle for six seasons at University of Montana, as a student manager, graduate assistant then director of basketball operations.

OSU men's basketball: A season by the numbers

Ethan Thompson will be remembered as a leader during one of the greatest postseason runs in Oregon State men’s basketball history.

COVID-19 restrictions are lifting and many people are headed outdoors to make up for time lost.

Xzavier Malone-Key is the latest player to sign with the Oregon State men's basketball season for the 2021-22 season.

After Oregon State's postseason run, Ethan Thompson got to work on improving his skills and body with the hopes of being a professional basketball player.

Thompson (5) has been training and working out in his home state of California to prepare for professional basketball.