See where and how fast virus cases are rising in our state and nation, in 8 maps and charts

OSU men's basketball: A season by the numbers
Share this
Return to homepage × 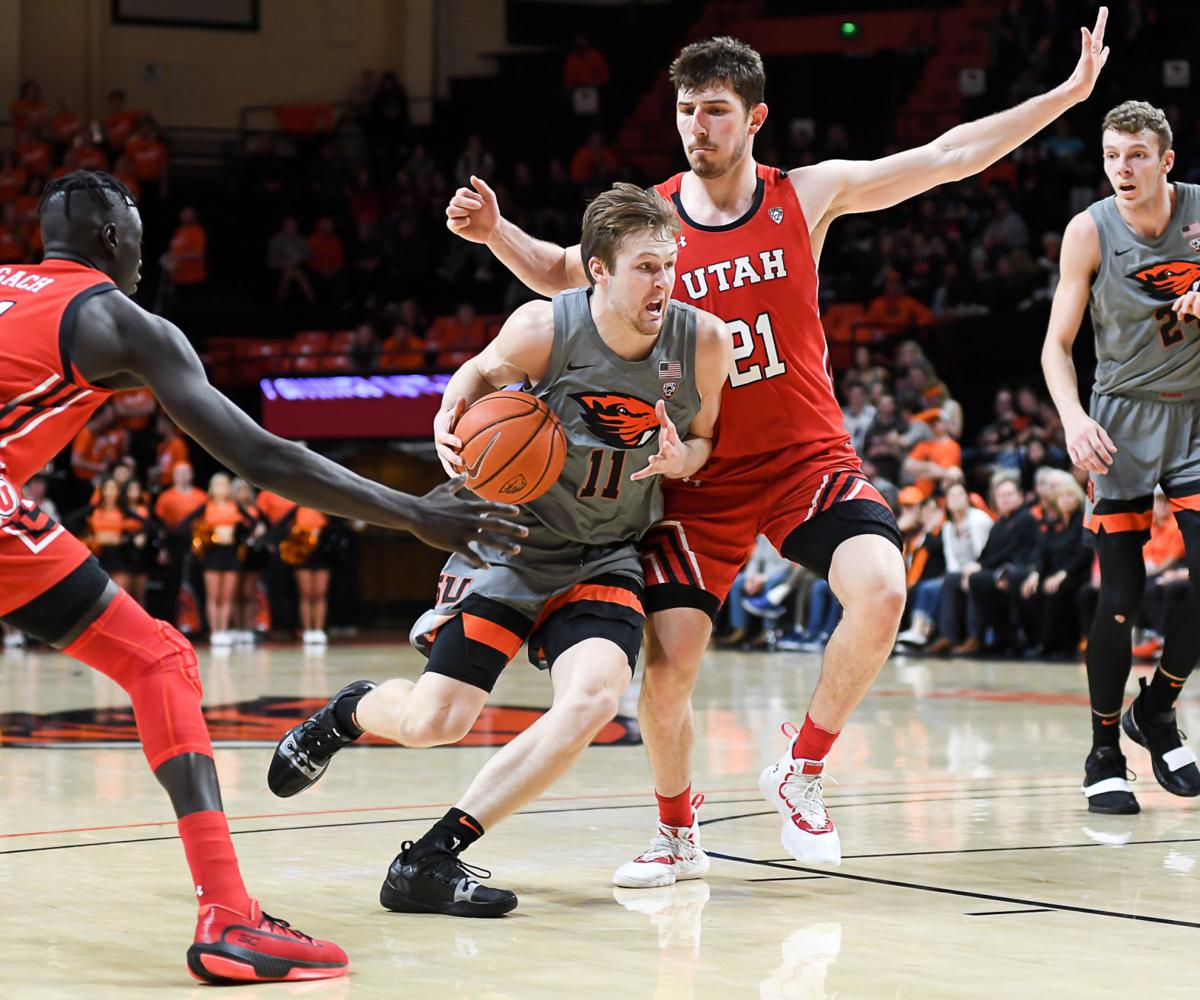 Zach Reichle drives to the basket in Oregon State's home game against Utah. The junior guard had a strong finish to the season. 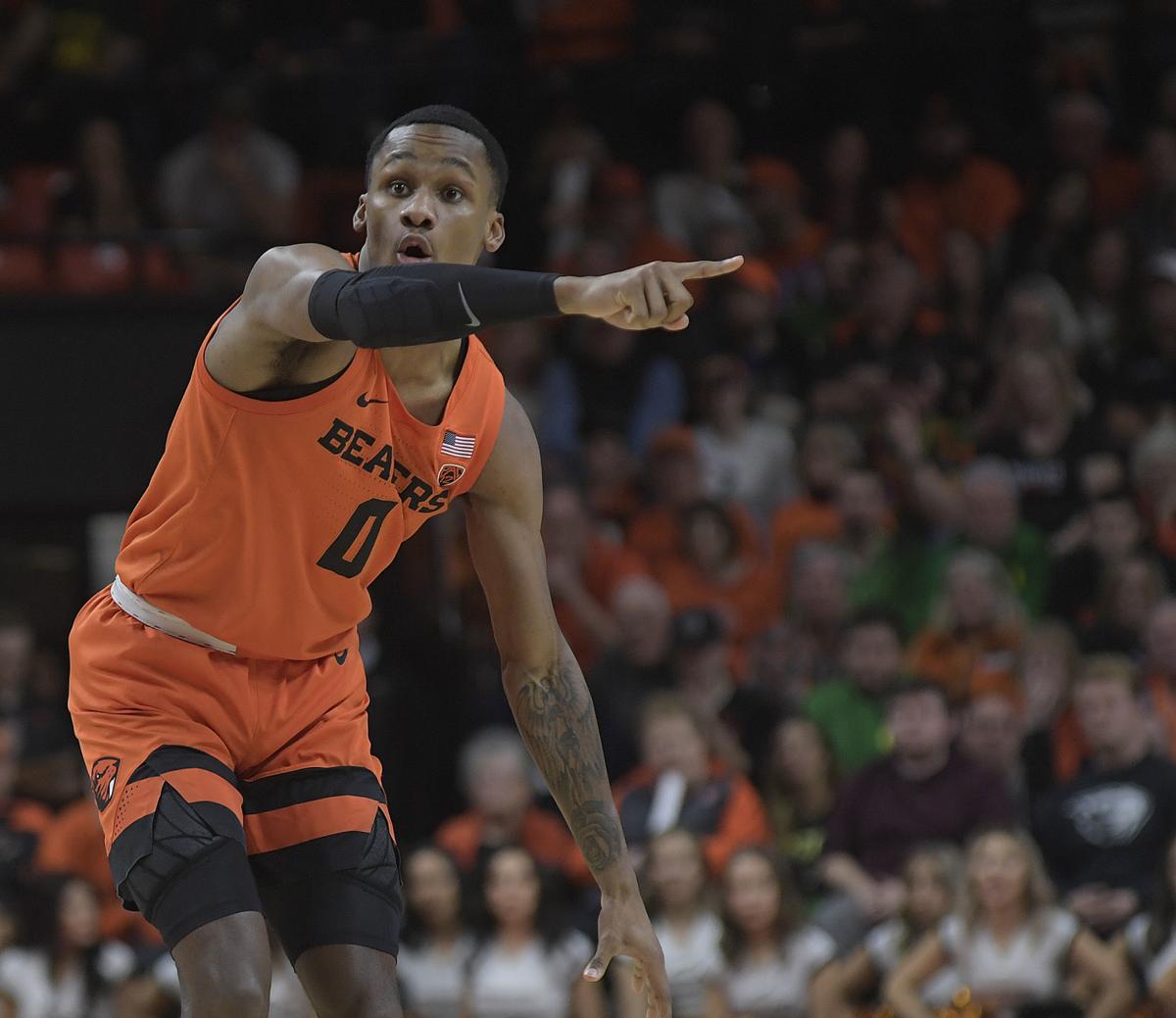 Oregon State's Gianni Hunt saw his role increase as the season continued. The freshman guard had 17 points over the last three games, his best offensive stretch of the year.

The Oregon State men’s basketball season ended on a high note, as a Jarod Lucas 3-pointer in the closing seconds gave the Beavers a 71-69 win against Utah at the Pac-12 tournament.

It wasn’t until later that the team would learn its season was over. But that final game was an historical one, especially for senior forward Tres Tinkle.

Tinkle’s three assists in the game gave him 374 in a Beavers uniform, moving him from 11th to a tie for eighth in school history, joining Eric Knox and Lamar Hurd. More notably, it makes Tinkle the only player in OSU history in the top 10 for career points, rebounds, assists and steals.

Tinkle’s three rebounds against Utah jumped him past A.C. Green for second in school history with 882. Tinkle also made one 3-pointer versus the Utes to tie him for second with Ahmad Starks for second on Oregon State’s career list with 185.

Here’s a look at some other statistical numbers that stood out in Oregon State’s season.

The Beavers (18-13) shot 78% at the free-throw line against Pac-12 opponents and finished the season at 75.1 to set a new school record. That mark led the conference, the first time since the 1990-91 season that OSU had done that.

Senior forward Kylor Kelley took over the top spot on the school’s career blocks list (he now has 211) and reset the single-season blocks mark at 107, breaking the record of 104 he set last season.

Kelley shot 5 of 6 from the floor against Utah to bring his career field goal percentage to 62.4. That would be good for second on OSU’s career list, but his 375 attempts are 125 below the number to be included.

Tinkle passed Gary Payton as the school’s career scoring leader on March 5 at home against Stanford. Tinkle finished with 2,233 points with a scoring average of 17.7 that’s seventh in school history.

The Beavers ended the season on a three-game winning streak and were arguably playing their best basketball of the year.

Freshman guard Gianni Hunt and junior guard Zach Reichle were making some of their biggest contributions on that stretch as well.

Hunt had 17 combined points over the last three games, marking his best span of the season. He had two steals in each of the final three contests.

Reichle grabbed a career-best nine rebounds against California and averaged six over the final three games. He tied a career high with six assists versus the Golden Bears and followed that up with five more against Utah.

He also tied a career high with three steals in the last two games.

Oregon State had its fourth winning season in six years under head coach Wayne Tinkle. OSU had just two winning seasons in 24 years before he became coach in 2014.

The Beavers were 18-13 for a second straight season, bringing coach Tinkle’s OSU record 93-96, which includes a 5-27 mark in a 2016-17 season marred by injuries and other circumstances.

Oregon State finished tied for fourth and tied for eighth in conference play the past two seasons, the program’s best combined finish over a two-year span since the 1991-92 and 1992-93 seasons.

March brings the highs and lows for college basketball teams and their fans, as buzzer-beaters made and missed bring a gamut of emotions.

The roots of a basketball family grew from the days the Tinkle children would sit in car seats and watch their parents play in city league games.

Jarod Lucas missed a game-winning 3-pointer at Arizona State but not this one.

Zach Reichle drives to the basket in Oregon State's home game against Utah. The junior guard had a strong finish to the season.

Oregon State's Gianni Hunt saw his role increase as the season continued. The freshman guard had 17 points over the last three games, his best offensive stretch of the year.