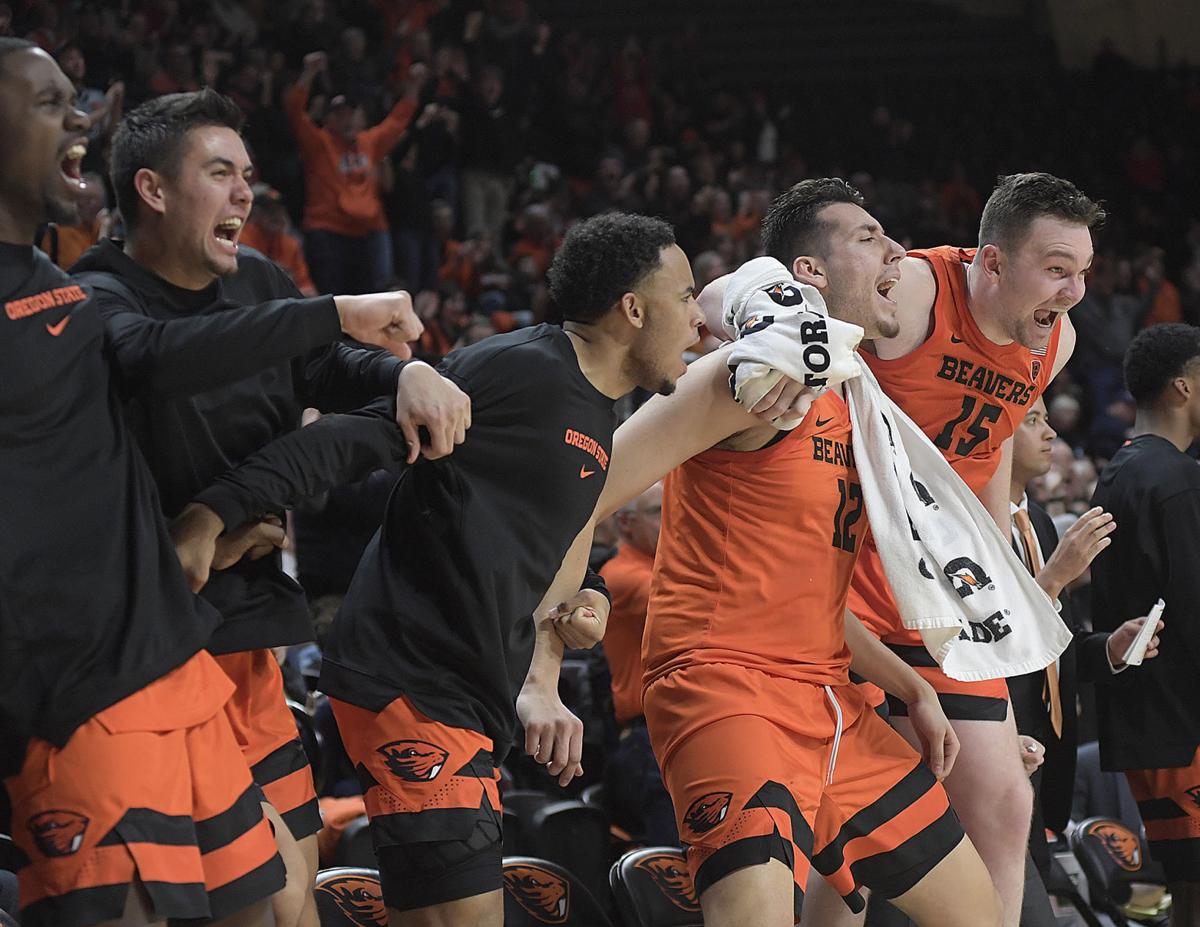 Oregon State's bench celebrates a Kylor Kelly dunk late in the second half of the Beavers' 82-65 upset of No. 24 Arizona on Sunday. 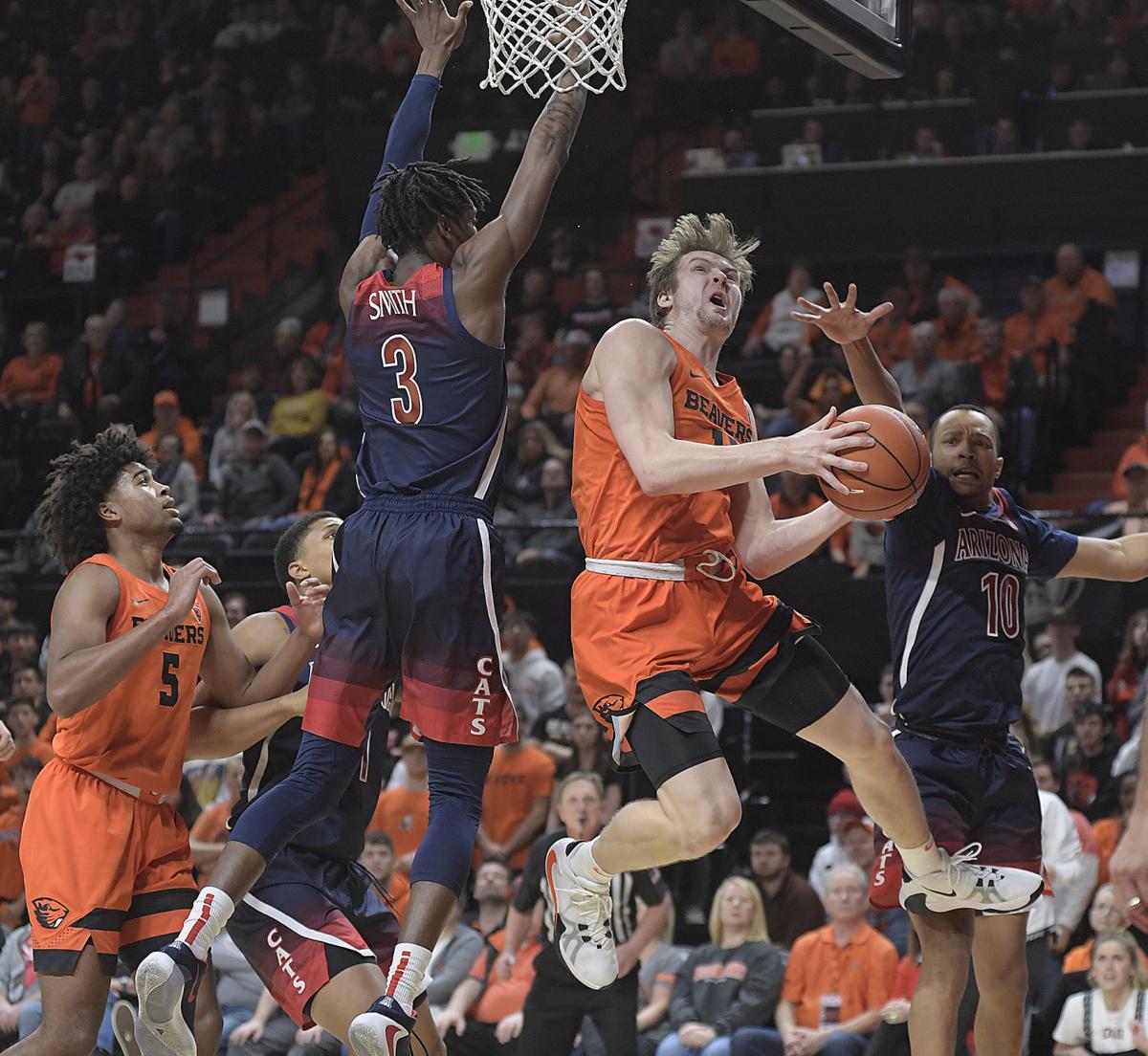 Oregon State's Zach Reichle lays it up in between Arizona's Dylan Smith (3) and Jemari Baker Jr. late in the second half. Reichle had 11 points in the win. 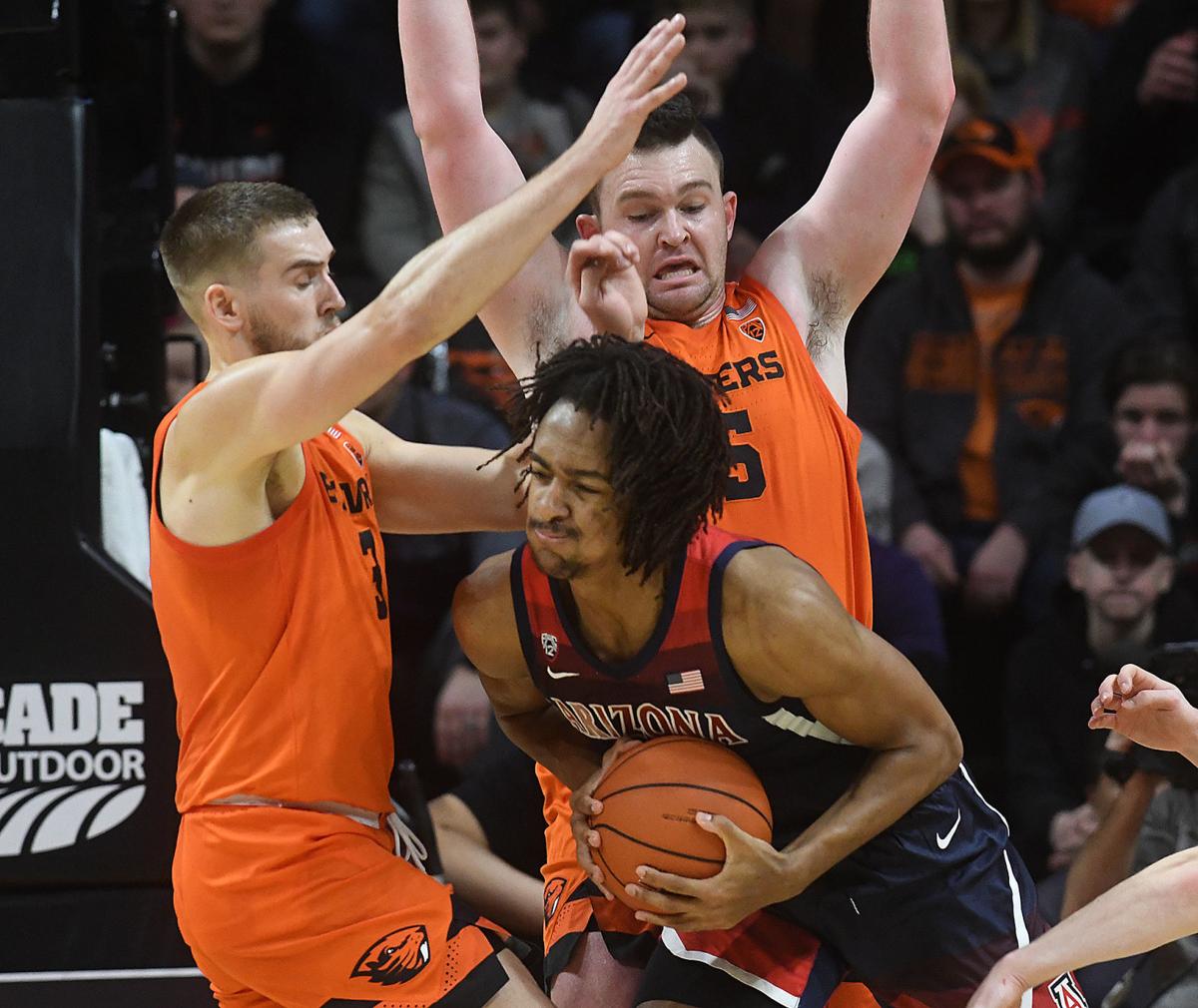 Wayne Tinkle joked after his team’s Jan. 5 comeback win at Colorado that his players had “messed up” because they had shown what they were capable of doing.

Sunday night, OSU showed its coach again what is out there if the team is locked in and focused on defense.

The Beavers held No. 24 Arizona to 34.5% shooting on their way to an 82-65 win at Gill Coliseum to get back to even in conference play.

“We’ve got a long way to go defensively. Tonight, that was our focus,” Tinkle said. “Our defense has been horrid the last four or five games and our teams don’t play that way. These guys took it personal when we challenged them and responded.”

Tres Tinkle had 20 points, six rebounds and seven assists and Ethan Thompson 18 points and eight assists as the Beavers had all five starters in double-figure scoring for the first time this season.

“I think we started off the game with a lot of energy,” Thompson said of what his team found Sunday that might have been missing or lacking. “That led to a lot of energy on defense, a lot of deflections, steals.”

The Beavers got seven steals in all, three by Tinkle. Oregon State won the rebounds 31-28.

“I credit Oregon State. They were outstanding in the second half. We really couldn’t guard them,” Arizona coach Sean Miller said. “So much of it was just, I’d use the word outclassed. We just weren’t able to match up with the players that they have.”

Thompson’s block of Nico Mannion on a transition layin started a fast break to the other end that Hollins finished with a flush on a Kelley assist.

Miller was called for a technical foul in that stretch, and Tres Tinkle made both free throws to tie the game at 41-all. Tinkle hit a 3-pointer soon after for a 44-43 OSU lead with 15:20 remaining.

Later, Hollins was bending over from the waist after apparently getting hit in the face on a rebound just seconds before hitting a 3-pointer from the left wing for a 56-49 Beavers lead.

Reichle would add a layin and two free throws before Thompson hit Tinkle with a backdoor pass for a layin to put Oregon State ahead by 12.

The Beavers essentially put the game out of reach with a 6-0 run that started with Thompson making a spinning move in the key and finding Kelley for a two-handed jam and a foul that got the home crowd off its feet.

Kelley missed the free throw but soon after made two more in a one-and-one opportunity. Thompson made two of three foul shots after getting hacked on a 3-point attempt with 4:03 remaining to give OSU a 74-56 advantage.

Arizona would get no closer than 15 from there.

Tres Tinkle, the coach’s son, echoed his father’s idea that maybe wins have been celebrated too much. The Beavers believed they possibly weren’t ready for Arizona State because they were still looking back at the victory at Colorado.

“We’ve shown when we’re down we can fight. We’ve got to live in the moment, enjoy it and move on,” he said.

A quick start gave the Beavers some momentum and a lead they would hold for nearly 14 minutes in the first half.

The Beavers got contributions from reserves Payton Dastrup (four points, two rebounds for the half) and Sean Miller-Moore (two points, one assist, one steal) that kept the home team ahead 19-14.

It was that margin and some solid defense that kept the Wildcats from running away with it because the Beavers would go the next five-plus minutes without scoring.

Reichle found Hollins for a corner 3-pointer that put OSU up 29-28 with 45 seconds left in the half. Reichle’s reverse layin in the closing seconds tied the game at 31-all.

The Beavers had a 17-11 rebounding edge, with five offensive, at halftime. Nnaji and Tinkle each had nine points to lead their respective teams.

A quick look at the Oregon State men’s basketball schedule shows the Beavers have been on a roller coaster the past month, alternating wins an…

Oregon State's bench celebrates a Kylor Kelly dunk late in the second half of the Beavers' 82-65 upset of No. 24 Arizona on Sunday.

Oregon State's Zach Reichle lays it up in between Arizona's Dylan Smith (3) and Jemari Baker Jr. late in the second half. Reichle had 11 points in the win.