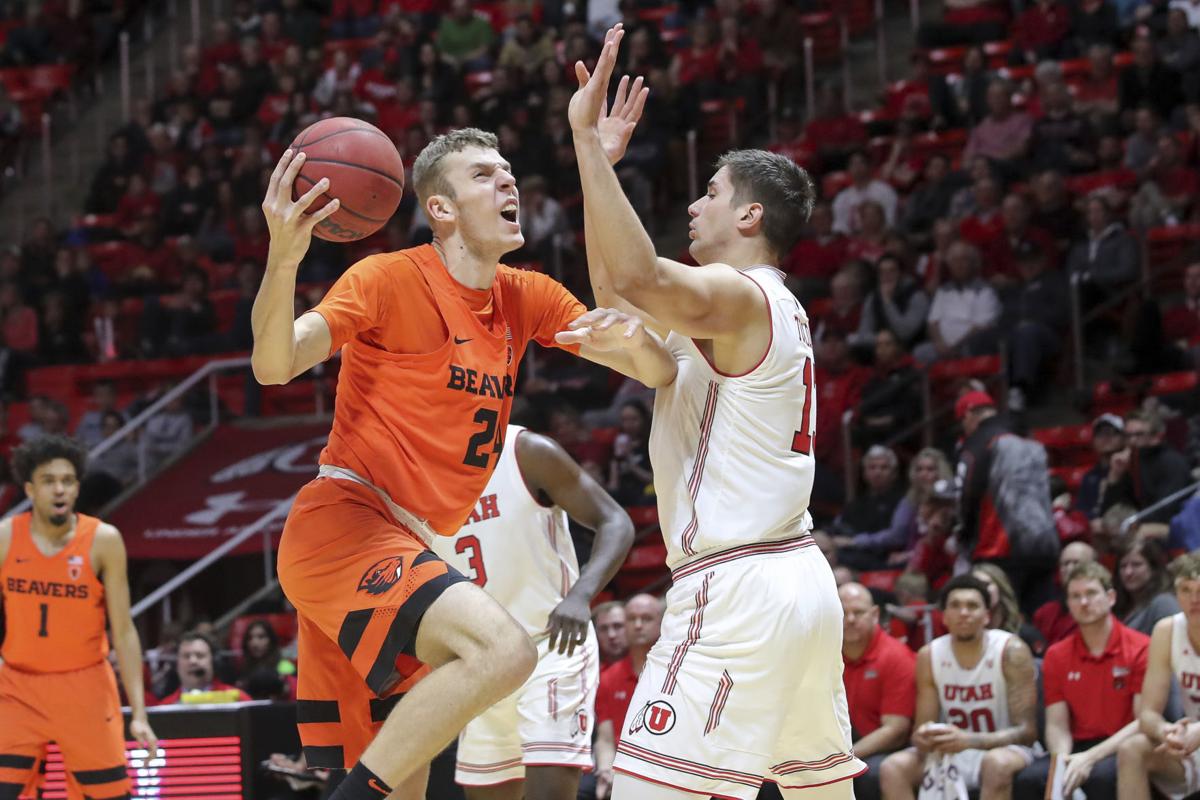 Oregon State's Kylor Kelley, left, protects the ball from Utah's Both Gach on Saturday. Kelley had six blocks to set the Beavers' single-season record in the win over the Utes. 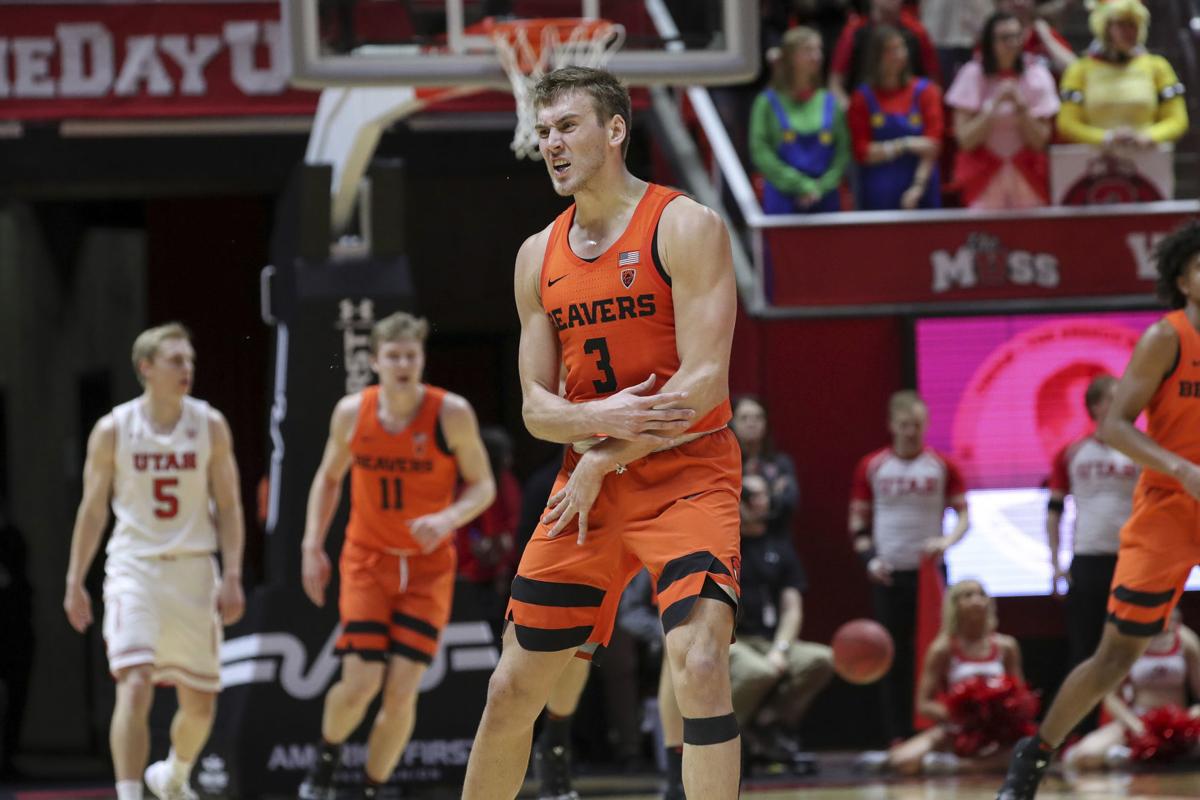 Oregon State's Tres Tinkle celebrates after making a 3-point basket against Utah. Tinkle had 31 points to help the Beavers complete a road Pac-12 sweep of the Mountain schools.

SALT LAKE CITY — Oregon State has put all the talk of learning to win on the road in the rear-view mirror.

Tres Tinkle had 31 points and Oregon State got an 81-72 Pac-12 win at Huntsman Center and the men's basketball program’s first two-game conference road sweep in a decade.

Tinkle, one point off his career high set earlier this season against Penn, shot 10 of 15 from the floor, 3 of 5 on 3-pointers and 8 of 9 at the free-throw line. He added six rebounds, four assists and two blocks.

The redshirt junior forward’s biggest shot was a 3-pointer with 1:41 left that extended the Beavers’ lead to seven.

“I was just playing with confidence, hearing my pops (OSU coach Wayne Tinkle) tell me to go get the ball, make plays, showing that he has confidence in me in crunch time,” he said.

Kelley claimed the OSU single-season blocks record with six Saturday — all in the second half — to give him 77 for the season. He passed Eric Moreland, who had 73 in the 2012-13 season.

Stevie Thompson added eight points, four rebounds and three steals. Antoine Vernon had seven points, including 5 of 5 at the foul line to improve to 13 of 13 for the season.

Saturday’s win gives the Beavers three on the road in conference play, the most for the program since the 2009-10 team also won three.

“When we had to make plays, we did on both ends,” said coach Tinkle, whose team responded from a disappointing effort in a home loss to Washington seven days earlier to equal the program’s best conference start since the 1989-90 team opened 8-1. The 1992-92 squad also started 6-3.

“Then our guys clamped it down,” coach Tinkle said. “We got to shooters, we blocked shots. We kept them off the free-throw line.”

The Beavers built a 46-32 halftime advantage with a balanced offense and a solid defensive effort.

The Utes cut into their deficit as Oregon State opened the second half missing two shots and turning the ball over five times in the first three-plus minutes.

Utah closed within six after consecutive conventional three-point plays by Donnie Tillman and Allen. Tres Tinkle came back with a 3-pointer and a layin.

Utah’s Sedrick Barefield later went on a personal six-point run to close the gap to five. Tinkle responded with a bucket off an offensive rebound after Kelley set the blocks record on the other end, and Ethan Thompson followed with a 3-pointer to push the lead back to 10.

Utah got it to six on a Barefield 3-pointer with 3:42 remaining, to which Tinkle answered with a layin.

The Utes had one more run, getting to within four on layins by Barefield and Allen.

Tinkle then provided what turned out to be the final dagger with his 3-pointer late in the shot clock that put the Beavers up seven.

Oregon State was the more aggressive of the two teams in the first half.

The Beavers got 10 points in an early 16-1 run at the free-throw line. It was a balanced attack, with seven different players scoring in that run.

OSU scored 14 of its first 25 points at the foul line and was 18 of 22 in the first half. The Beavers’ 22 attempts were more than their final total in 13 games this season.

But Tres Tinkle took the offensive load for the Beavers, scoring the team’s next six points, including a dunk with 4:13 left that stretched the lead to nine.

OSU used an 8-1 run — with four points apiece from Tinkle and Stevie Thompson — to go ahead by 14 at the break.

“We wanted to get back to, that’s where we hang our hat (on defense), and that’s what we did. We made it tough for them,” Tres Tinkle said.

Taya Corosdale had a difficult decision to make a couple months back.

Former Oregon State standout Mikayla Pivec has decided to sit out the 2020 WNBA season for personal reasons, according to a tweet by the Atlan…

Major college recruiting saw big changes with the addition of the transfer portal in recent years, and the move to virtual campus visits and i…

Oregon State's Kylor Kelley, left, protects the ball from Utah's Both Gach on Saturday. Kelley had six blocks to set the Beavers' single-season record in the win over the Utes.

Oregon State's Tres Tinkle celebrates after making a 3-point basket against Utah. Tinkle had 31 points to help the Beavers complete a road Pac-12 sweep of the Mountain schools.