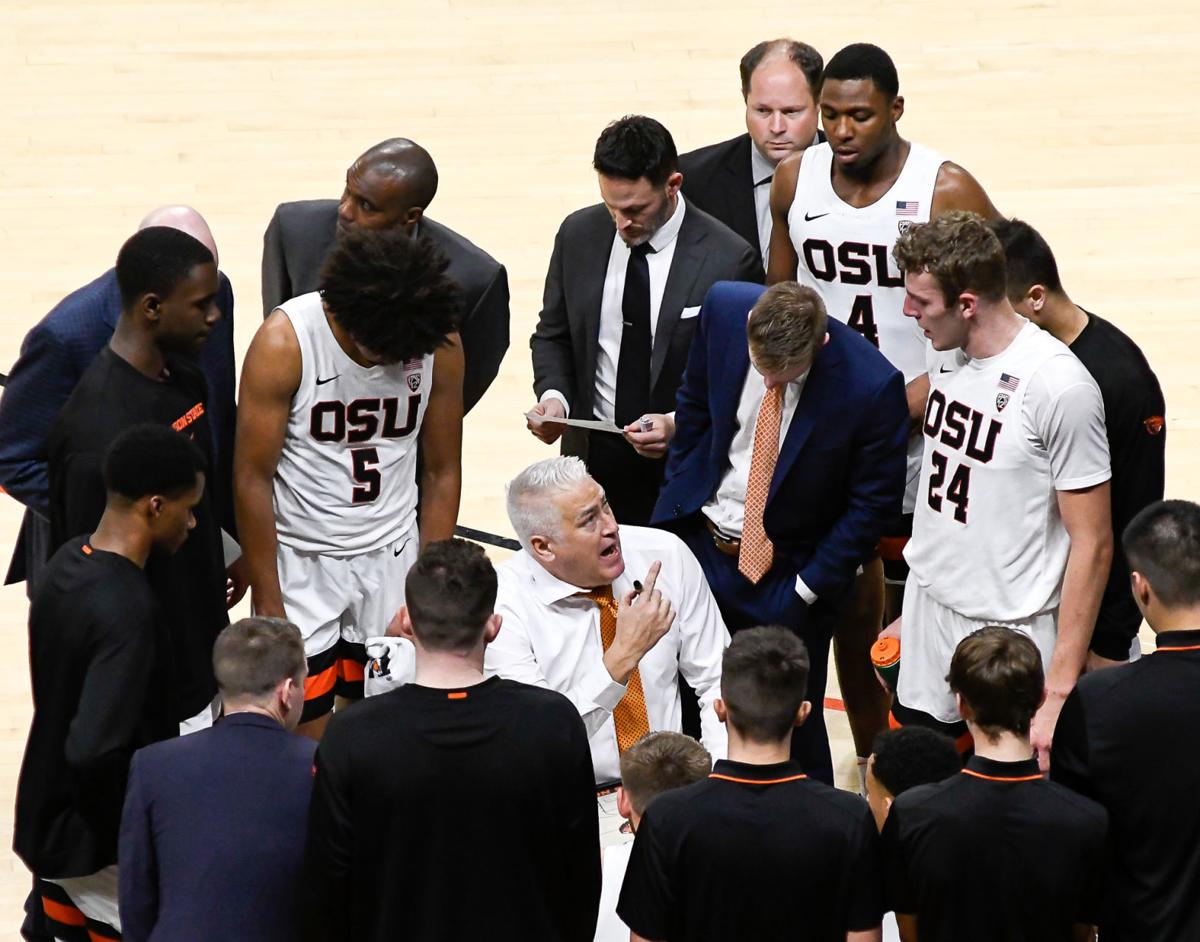 Wayne Tinkle and the Beavers are searching for more consistency on the defensive end. 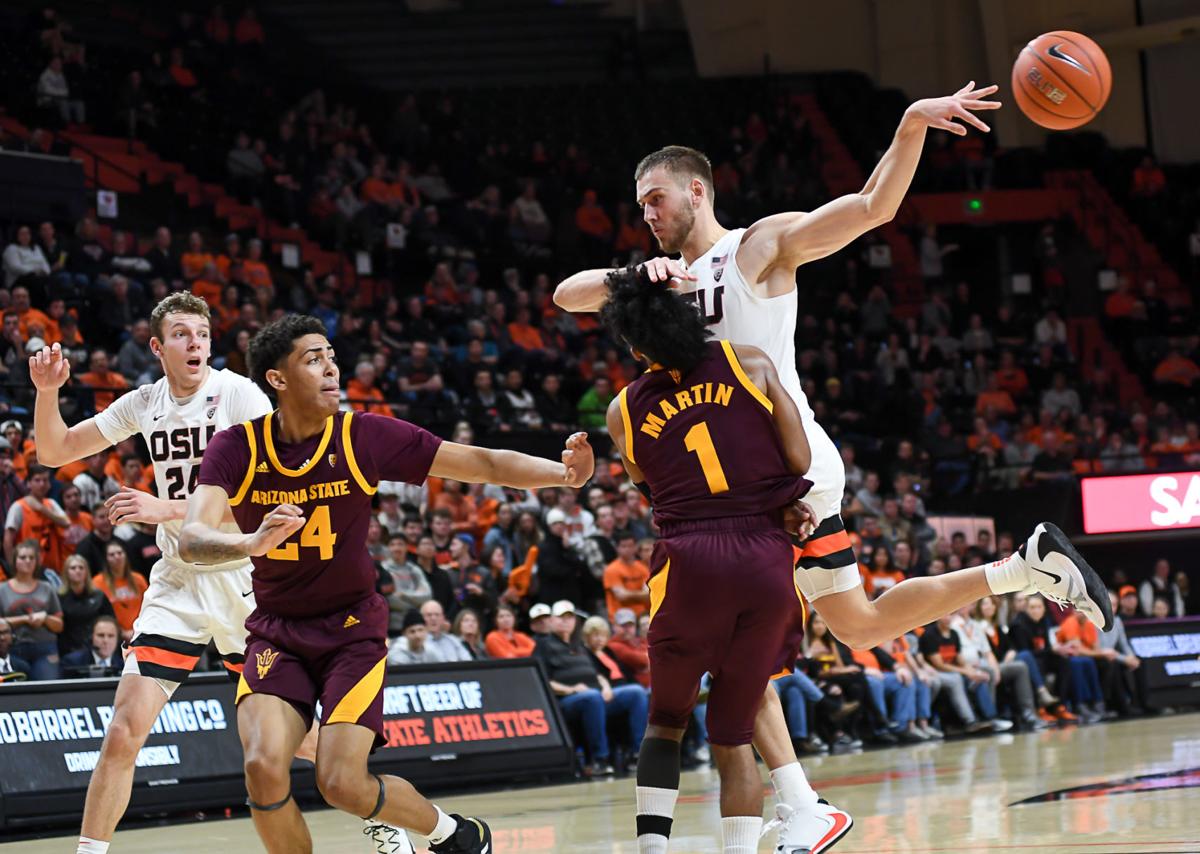 Oregon State's Tres Tinkle, passing the ball in Thursday's first half against Arizona State, says it's up to the Beavers' starters to set an example and set the tone on defense.

“Showed some fight … but we’ve got to get a lot better defensively.”

That was Wayne Tinkle’s statement and overriding message after Oregon State fell behind big and couldn’t climb all the way back in an 82-76 home loss to Arizona State in a Pac-12 men’s basketball game on Thursday night.

The Sun Devils' advantage eventually reached 17 midway through the second half. The closest the Beavers would get was four, but that came on an Ethan Thompson layup with 16 seconds left.

Both teams shot well in the second half, with OSU holding a slight advantage at 55.6 to 51.9. An ASU team that’s struggled this season on offense had its third-best field goal percentage (48.3) and tied its top 3-point mark (50.0).

“They could pick whatever poison,” Tinkle said. “They beat us off the dribble and got to the rim. We helped, they’d kick it and hit 3s. Sometimes you’ve got to just tip your cap."

Just as the Beavers were motivated at Colorado the previous Sunday after a 12-point loss at Utah, so seemed to be the Sun Devils after falling by 28 at Arizona.

An Oregon State program that prides itself in holding opponents under 40% shooting hasn’t done that the past six games. The Beavers have accomplished that five times this season, versus Cal State Northridge, UC Santa Barbara, Grambling State, San Jose State and Arkansas-Pine Bluff.

Four of those opponents were held more than 5% below their current season shooting percentage.

Four of six OSU opponents since the Beavers last held a team under 40% have shot better than their current season percentage.

Three Pac-12 opponents have combined to shoot 48.8% percent in the first half. Oregon State has trailed by percentage and on the scoreboard in all three games.

“On the ball, off the ball, at the rim. For whatever reason all the things that we’ve worked on, we’re just too inconsistent with it,” Tinkle said. “We need to find a way to make sure we’re hell, fire and brimstone coming out of the locker room.”

The Beavers had defensively breakdowns Thursday due to miscommunication from the start of the game with players uncertain which defense they were playing.

Senior forward Tres Tinkle said the team’s veterans and leaders, particularly those that start, have to make sure they’re “fired up and ready to play aggressively” and understand what they’re supposed to be doing on the defensive end.

“In all aspects we’ve got to take over and lead by example,” he said. “We have a starting five for a reason. We have to set the tone for how we’re going to play and then for people coming off the bench.”

The Beavers will have to find an answer in a hurry or find themselves buried in the conference standings. Next up are a Sunday home game against No. 24 Arizona (11-4, 1-1) and a Thursday road contest at Washington (11-5, 1-2), two teams picked to finish in the top half of the Pac-12 this season.

“I have confidence in this team every single night we step on the court,” Thompson said. “We lost the first game last week (at Utah) and came back on the road and won and got the second one. So I’m confident that we can do that again.”

A quick look at the Oregon State men’s basketball schedule shows the Beavers have been on a roller coaster the past month, alternating wins an…

Wayne Tinkle and the Beavers are searching for more consistency on the defensive end.

Oregon State's Tres Tinkle, passing the ball in Thursday's first half against Arizona State, says it's up to the Beavers' starters to set an example and set the tone on defense.