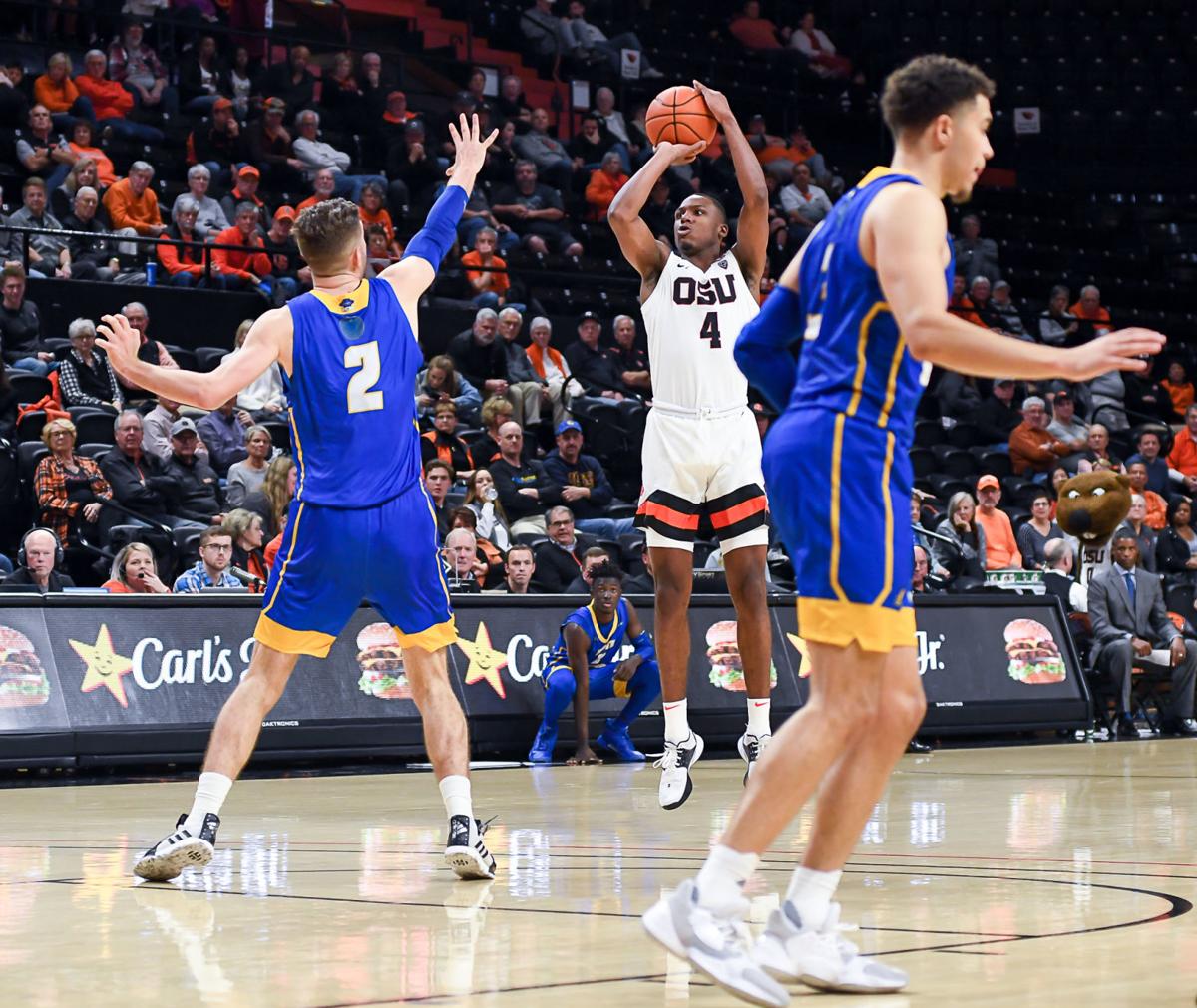 Oregon State's Alfred Hollins has seen his 3-point percentage improve from 23.1 last season to 38.1 percent this season, while the Beavers as a team have gone from 32.1 to 39.1. 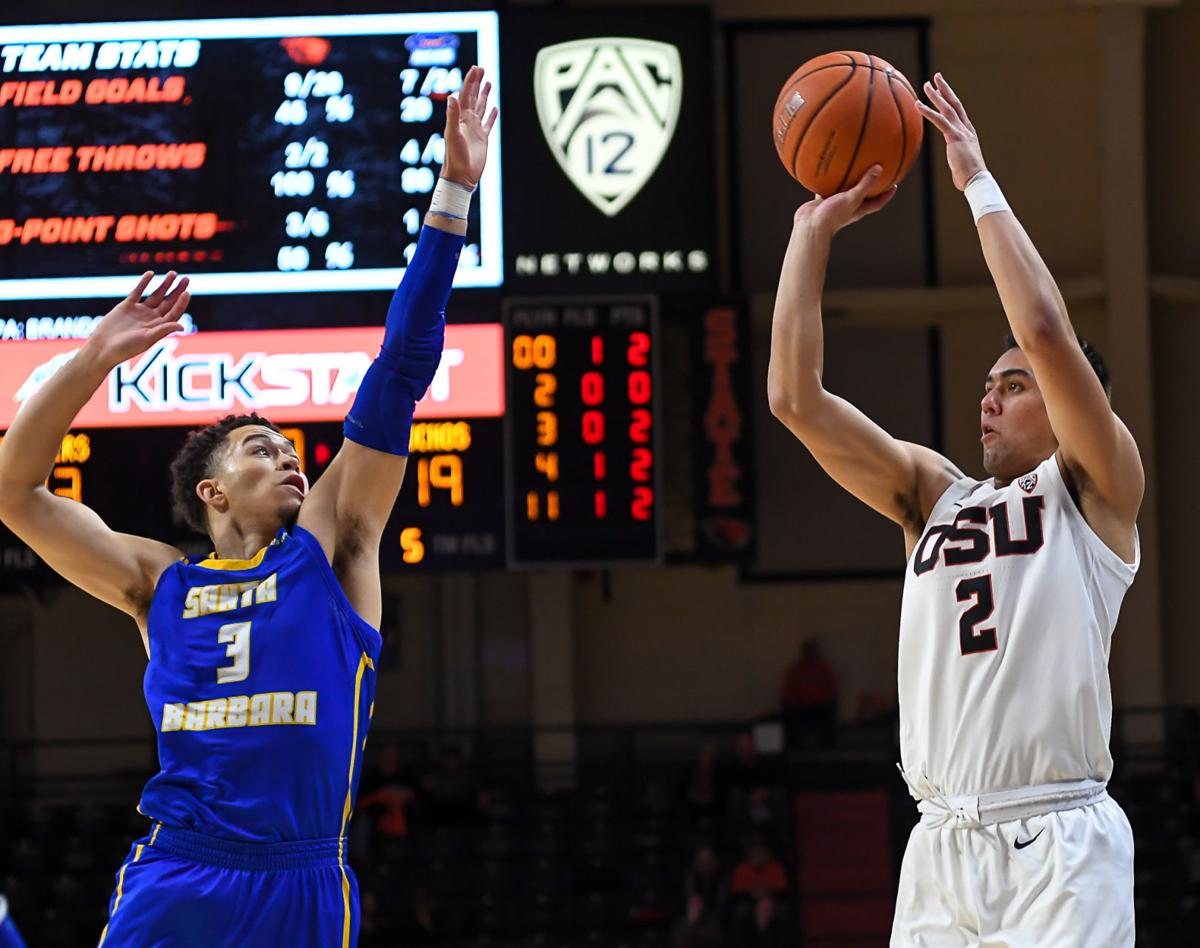 OSU freshman guard Jarod Lucas is 8 of 16 on 3-pointers this season. 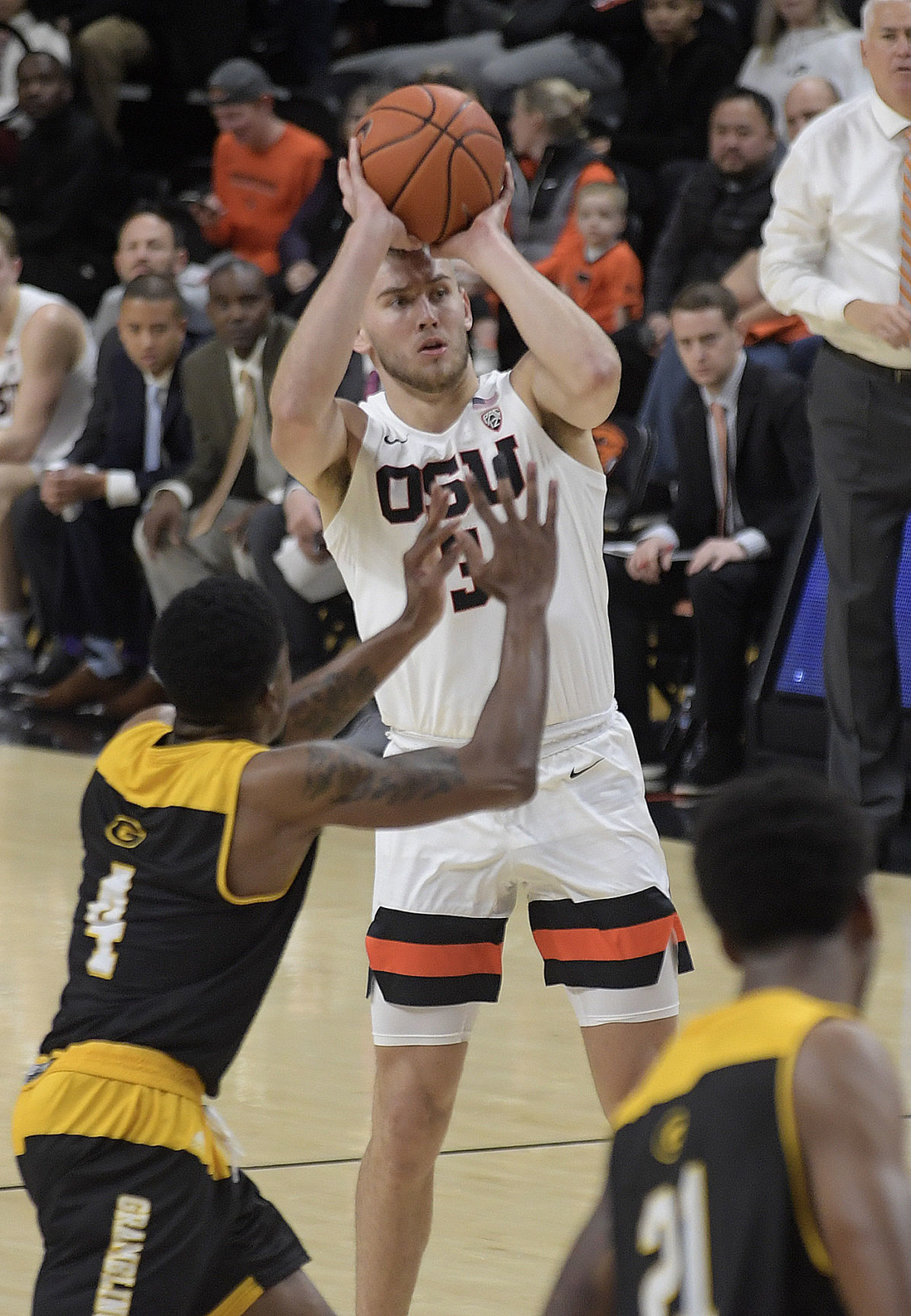 Tres Tinkle is shooting 47.5 percent from 3-point range this season.

Oregon State’s rise in 3-point field goal percentage over last year started in the offseason with the players’ focus on becoming better shooters.

Added depth, an effort to pass the ball into the post and working the ball to find open shooters have all been contributing factors.

The Beavers (7-1) are shooting 39.2 percent after last Saturday’s home win against Portland State in which OSU made 6 of 14 (42.9), the team’s four game making 40 percent or better from long range. That followed an 11-of-21 game against San Jose State in Las Vegas. OSU hit 12 of 21 in a November home game versus Iowa State.

The Beavers’ season percentage is the fourth-best mark in the Pac-12 and No. 29 in the country through Tuesday’s games. Last year they shot 32.1 for the season.

“I think us finding open spots, finding each other in the right places where we’re comfortable,” said OSU’s Alfred Hollins.

Tres Tinkle has had a major role in OSU’s improved numbers. The senior forward, the team’s top shooter in 3-point attempts this year and second last year, is shooting 47.5 percent (19 of 40) on deep balls compared to 32.9 last year.

Tinkle, a fifth-year player, says this past offseason was the best in terms of OSU players getting in the gym. The variety of players who can hit from deep opens up the key.

“I think at times last year teams were really collapsing on my drive,” he said. “Now when we have guys that are hitting shots, there’s a more clear lane to the basket and they’re going to have to key on other people because they’re going to make them pay” if they sag off to help.

After shooting 36.3 and 32.7 from 3-point range his first two full seasons at OSU, Tinkle aimed to reach 40 percent last season but again fell short, noting that he had to take tougher shots and didn’t have as much scoring help as he does now.

“I believed I was always someone capable of shooting that percentage,” he said.

The left-hander continued with a high number of repetitions in the offseason and worked on mechanics, specifically having his feet set and being ready to shoot when he receives the ball in order to reduce his release time.

Beavers coach Wayne Tinkle said he and his staff joked that moving the line back could only help his team’s percentage, which was 11th in the conference and 293rd of 351 Division I teams in 2018-19.

He says the team’s new depth has brought more urgency and better performance.

“Also, I think we’re getting a lot of inside-out looks, throwing it into the post, kicking it back out, penetrate, kick,” the coach said. “So we’re getting better looks. I think that’s also a big part of why those numbers are up.”

“Just moving the ball and playing together,” he said. “I think we’re doing a lot better at taking better looks than the past couple years. Penetrating to pass, in-and-outs, that’s probably the main reason.”

Thompson also pointed to extra time spent shooting as a reason why the Beavers are a better overall shooting team than last season.

“I think that’s just paying off now. I think we’re getting better quality looks, more inside-out shots where our feet are set and we’re not taking rushed 3s,” he said. “You can’t really help off of anybody because they’re going to make you pay if they’re open.”

It’s not the ideal way to enter a stretch where you play your rival twice in the span of three days, but the No. 7 Oregon State women’s basket…

EUGENE — Friday night’s much anticipated women’s basketball Civil War at Matthew Knight Arena appeared to be a headed for an Oregon rout, espe…

EUGENE — There were no smiles and no moral victories for the No. 7 Oregon State women’s basketball team Friday night.

Sean Miller-Moore is the definition of a role player.

Second-guessing is a natural reaction after falling short of an end goal.

Oregon State's Alfred Hollins has seen his 3-point percentage improve from 23.1 last season to 38.1 percent this season, while the Beavers as a team have gone from 32.1 to 39.1.

OSU freshman guard Jarod Lucas is 8 of 16 on 3-pointers this season.

Tres Tinkle is shooting 47.5 percent from 3-point range this season.