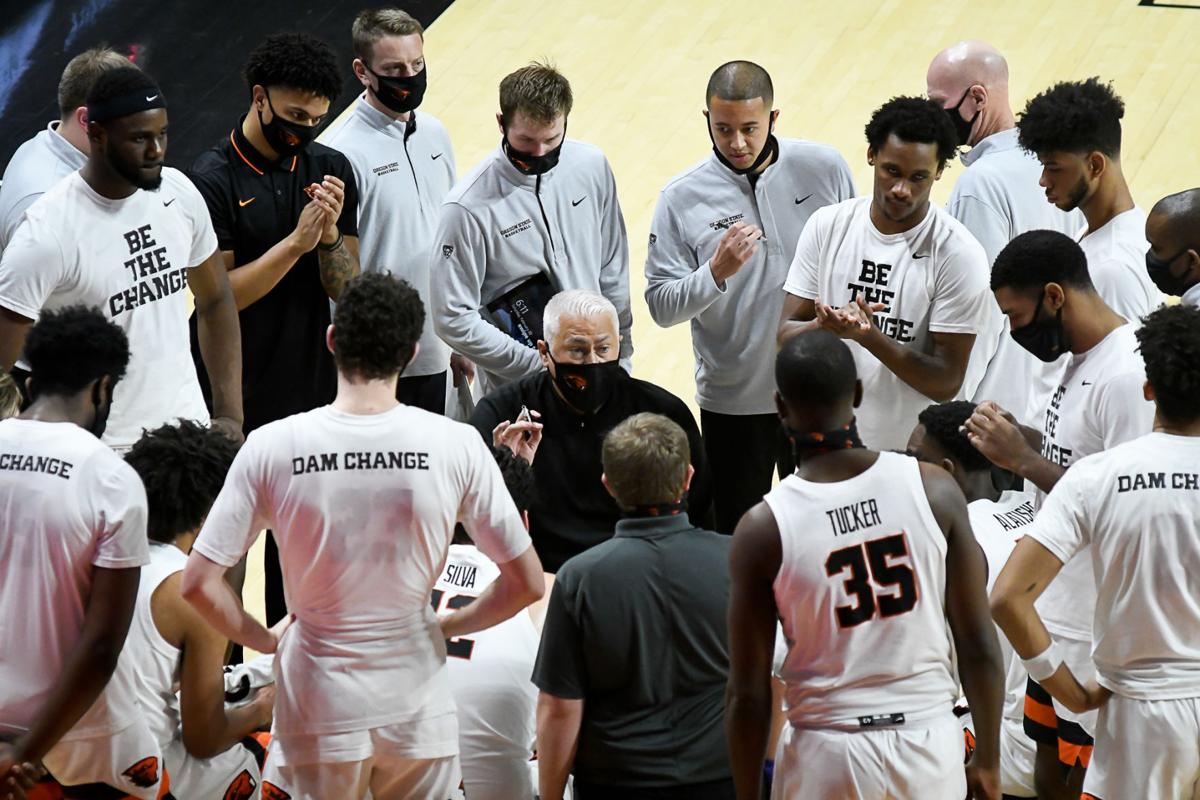 Coach Wayne Tinkle, center, and the Oregon State men's basketball program will examine in the offseason how the additional year of eligibility granted to players due to the pandemic might impact the Beavers' roster. 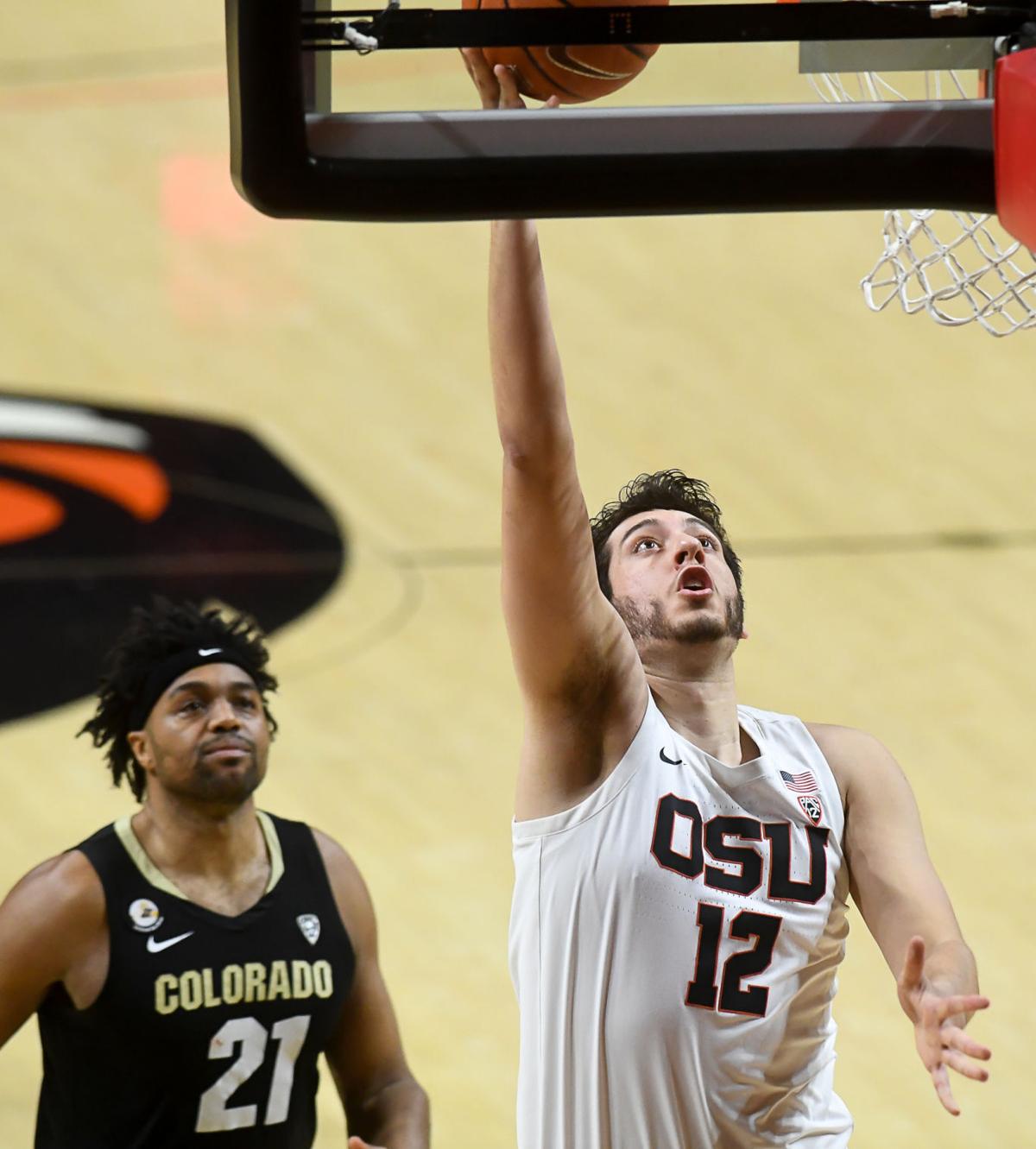 Oregon State senior center Roman Silva (12) could be back with the Beavers for one or more years.

The additional year of eligibility granted to current college athletes by the NCAA due to the pandemic hasn’t changed how Wayne Tinkle and his staff are recruiting.

“What it’s done is developed another list for us from guys that are at other schools that might be potential grad transfer types,” the Oregon State men’s basketball coach said.

The extra year given to players opens up new possibilities for athletes as well as coaches. The players can stay another season and extend their college careers, and the coaches can sign another athlete for every senior that decides to take advantage of the additional year.

But basketball programs must get back to the standard 13-scholarship limit for the following season, in 2022-23.

In order to avoid distractions, Oregon State will wait until after the current season to talk with the players about their individual futures.

In the meantime, Tinkle said the program will “recruit like we’re going to have extra scholarships so that we’re prepared if guys don’t want to come back or they want to move on to the next phase.”

Tinkle said an extra year could be beneficial for some of his younger players, and that will be part of the individual meetings after the season.

“What I think it’s going to really open things up as far as, if you’re going to bring a kid back for his senior year, you might really try to talk some into it,” the coach said. “Because it allows you now to have extra scholarship players. It will be interesting to see how that angle plays out.”

Before last Saturday’s home game against Colorado, Oregon State recognized guards Zach Reichle and Ethan Thompson for their contributions as seniors. Not included was another senior, center Roman Silva, who said he plans to return to OSU next year.

Silva is in his fifth year out of high school. He signed with Texas-El Paso and coach Tim Floyd in 2016 but left the program after about a month on campus. Silva broke his right foot twice, in 2016 and 2017.

He played at a California prep school in the 2017-18 school year and at San Bernadino Valley College the following season. Requesting an NCAA waiver to recover an additional year of eligibility, beyond that granted for the pandemic, once this season is completed could be an option.

The NCAA transfer portal, created in October 2018, has multiplied athlete movement and put a spotlight on those looking for new landing spots.

The Beavers had three players — Payton Dastrup, Sean Miller-Moore and Antoine Vernon — who decided to pursue other basketball opportunities when the 2019-20 season was over.

That opened the door for OSU to bring in a total of five new players. Because it had a large sophomore class returning, the program leaned toward interest in transfers and junior college players to add more maturity for this year’s team,” Tinkle said. Forward Isaiah Johnson was the only incoming freshman in the signing class.

“Coaches are discussing how much are you going to recruit high school seniors because it just seems like if they’re not happy after their freshman year they’re leaving, or their sophomore year,” Tinkle said. “Everybody talks about get old, get mature, get guys who have only a year or two left and you know they’re going to have to do things the way you want to do them because it’s their last go-round.”

Tinkle says it’s popular among young players who aren’t willing to pay their dues and wait their turn to transfer, looking for something better.

“I think that’s where the biggest impact has come in,” he said.

The Beavers signed shooting guard Dashawn Davis, who is playing at Trinity Valley Community College, in November. Davis, 6-foot-3 and 180 pounds, is the seventh-ranked junior college player in the country that Tinkle calls “a very dynamic guard.”

Last month, Oregon State added 6-8 forward Ahmad Rand, who played three games at University of Memphis this season before deciding to transfer. Rand spent the previous two seasons at USC Salkehatchie in South Carolina, where he was considered the No. 11 JC player in the nation and was a top shot-blocker.

Tinkle said his program is excited about what it’s building for the next few years.

“We’ve got some good young guards, but we’ve got to get a more physical imposing-type guard to complement what we have,” Tinkle said. “You see that we’ve got some forwards, a lot of like 6-6, 6-7 guys. We’re looking at guards and bigs.”

OSU men's basketball: Buffaloes' defense too much for Beavers again

Warith Alatishe’s offensive progress is evident to his coach, Wayne Tinkle, and others who have watched him grow into a player Oregon State is…

OSU men's basketball: Offense trying to catch up to defense

Oregon State was lost on defense earlier in the season, at one point giving up 50% shooting to four straight opponents.

OSU men's basketball: Beavers get defensive in final minutes to close out a win

The offense went dry down the stretch Thursday night, but Oregon State saw its defense save the day.

The hope and desire to get the ball to its post players down low and get production continues for the Oregon State men’s basketball team.

OSU men's basketball: A look at the opponent — Stanford

Oregon State goes for its first road sweep of the Bay Area schools since 2009 on Saturday when it plays at Stanford (3:30 p.m., Pac-12 Network…

OSU men's basketball: A look at the opponent — California

Oregon State and California will meet for the third time in the regular season Thursday night at Haas Pavilion. Here’s a look at the Golden Bears.

Oregon State has learned the past few weeks what it can do when it puts the pieces together.

Coach Wayne Tinkle, center, and the Oregon State men's basketball program will examine in the offseason how the additional year of eligibility granted to players due to the pandemic might impact the Beavers' roster.

Oregon State senior center Roman Silva (12) could be back with the Beavers for one or more years.