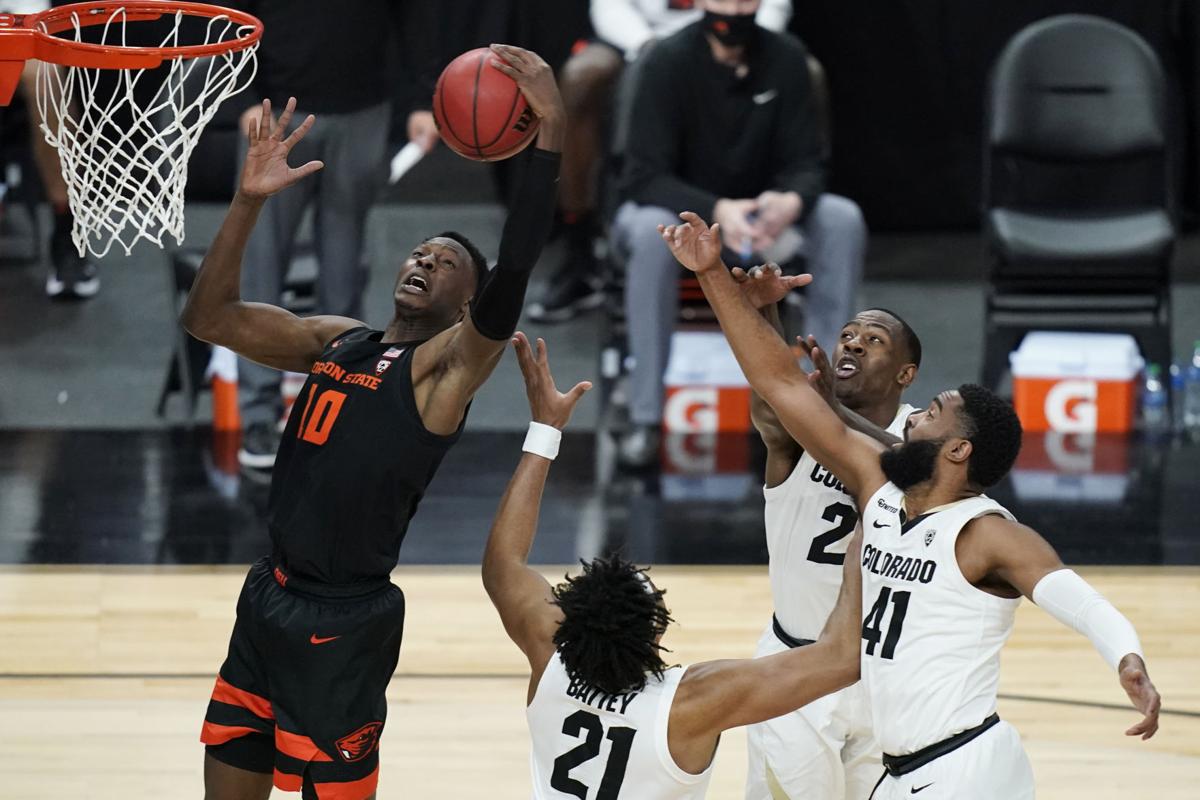 Oregon State's Warith Alatishe (10) grabs a rebound over Colorado in last season's Pac-12 tournament championship game. Alatishe, a senior forward, was named to the media's preseason all-Pac-12 first team on Wednesday and the Beavers were voted to a tie for fourth in the conference's preseason poll. 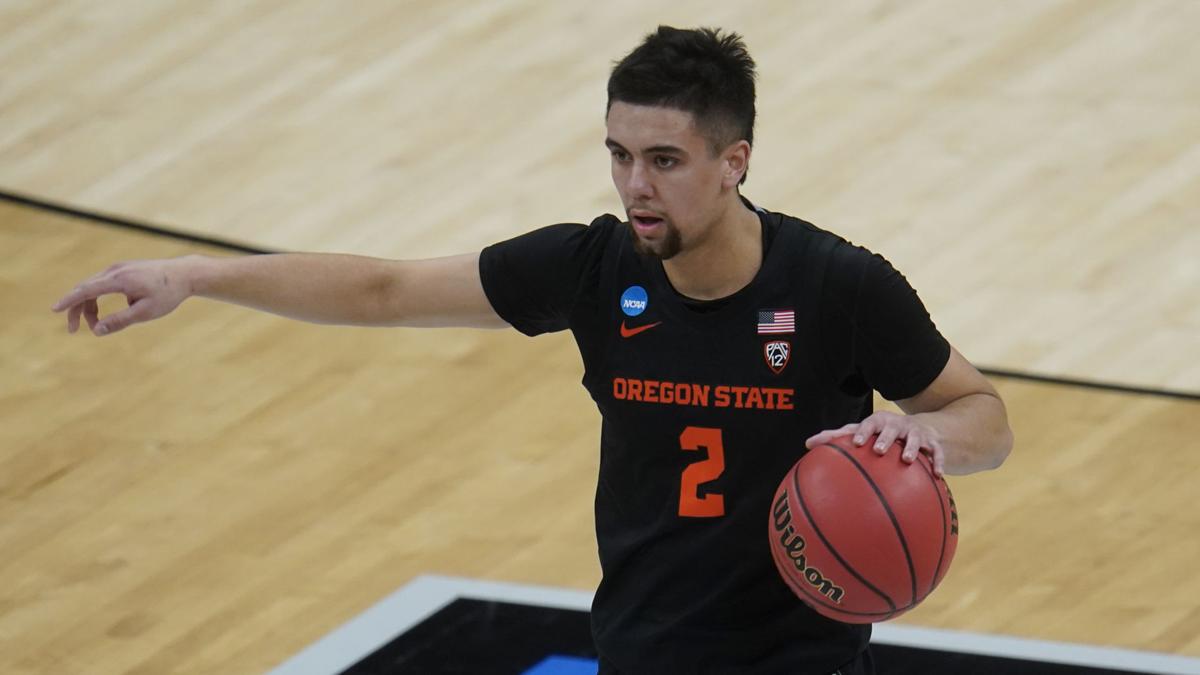 Oregon State guard Jarod Lucas returns after starting 23 games for a team that reached the NCAA Elite Eight. As a junior, he'll be asked to fill a bigger leadership role than in the past.

The idea of not being satisfied was stressed as the Oregon State men’s basketball team gathered to begin preparations for another season and continues to be a regular message.

The Beavers surpassed any and all expectations in winning the Pac-12 tournament last March before reaching the NCAA Elite Eight.

So the team, with seven new scholarship players, heads into the coming season realizing that historic experience is in the past and knowing it will take work to accomplish something like that again.

“We have brought in some talent. We’ve got some guys that really understood what put us in position to make that run back, but are they going to feeling content or are they going to thirst for more?” Oregon State coach Wayne Tinkle said Wednesday during Pac-12 media day in San Francisco. “Now you’ve got some transfers that are hungry to come be a part of it. So there’s been a little marking your territory, you know what I mean.”

Tinkle added that he said in a Tuesday meeting with his staff that “this can be good if we handle it the right way.”

“We’ve got some guys coming in that want to be a part of it,” the coach said. “We’ve got to rub the pretty off of a couple of them and get them to understand the Beaver way and we’ll be in good shape.”

Oregon State was voted to a tie for fourth place with Arizona in the conference’s preseason media poll released Wednesday after being picked 12th in the same poll last season.

Now upperclassmen, Hunt and Lucas will be asked to take on bigger leadership roles and motivate and get on teammates if they aren’t falling in line.

“You can never be great without being pushed in practice. You’ve got to be pushed every single day,” Lucas said. “Our guys in practice, new guys, returners, we’re all doing a great job pushing each other.”

With so many new players, building chemistry can face hurdles. The Beavers faced those same type of obstacles last year with five newcomers. All played in 23 games or more.

“It’s definitely been a challenge,” Alatishe, last year’s conference tournament most valuable player in his first year with the Beavers, said of practices so far. “A lot of guys bump heads, but you need that. It makes us better. Over time it’s coming along, and by the time the season starts I think we’ll have everything under control.”

Oregon State opens its schedule with a Nov. 4 home exhibition against St. Martin’s, while the first regular-season game is Nov. 9 versus Portland State, also at Gill Coliseum.

The Beavers’ two early Pac-12 games are Dec. 2 at California and at home against Arizona on Dec. 5. The meat of the 20-game conference slate begins Dec. 30 at home against Utah.

How will OSU go about playing with the same looseness it displayed in last year’s postseason while taking the court with higher expectations?

“I think it starts in practice, the things that we practice on, what the coach preaches and us just coming together and gelling together, increasing our chemistry, things like that,” Alatishe said.

Thompson and Reichle, the Beavers’ primary leaders as seniors last season, both had the option to return because of the additional year of eligibility granted by the NCAA due to the pandemic. But they left the program, Thompson to professional basketball and Reichle to life after his playing career.

That’s put more on the plate for Alatishe, Hunt and Lucas. Tinkle said he’s seen growth and maturity from all three in the offseason.

“Those guys are going to be expected to bring a lot,” the coach said. “Setting the tone day in and day out, eliminating some of the things that take away from us moving forward as a squad on and off the court. That’s going to be in their hands and I know they’re ready for the challenge.”

Oregon State watched as Loyola Chicago steadily chipped away at what had been a double-digit second-half deficit.

OSU men's basketball: A look at the Beavers' postseason run to the Sweet 16

How did Oregon State men’s basketball get to this point, meeting Loyola Chicago in the NCAA Sweet 16 on Saturday in Indianapolis?

It was the summer after his eighth-grade year that Xzavier Malone-Key began to realize he could have a future in basketball.

OSU men's basketball: A late arriver to the sport, Ahmad Rand sees himself as a defender

Oregon State's Warith Alatishe (10) grabs a rebound over Colorado in last season's Pac-12 tournament championship game. Alatishe, a senior forward, was named to the media's preseason all-Pac-12 first team on Wednesday and the Beavers were voted to a tie for fourth in the conference's preseason poll.

Oregon State guard Jarod Lucas returns after starting 23 games for a team that reached the NCAA Elite Eight. As a junior, he'll be asked to fill a bigger leadership role than in the past.