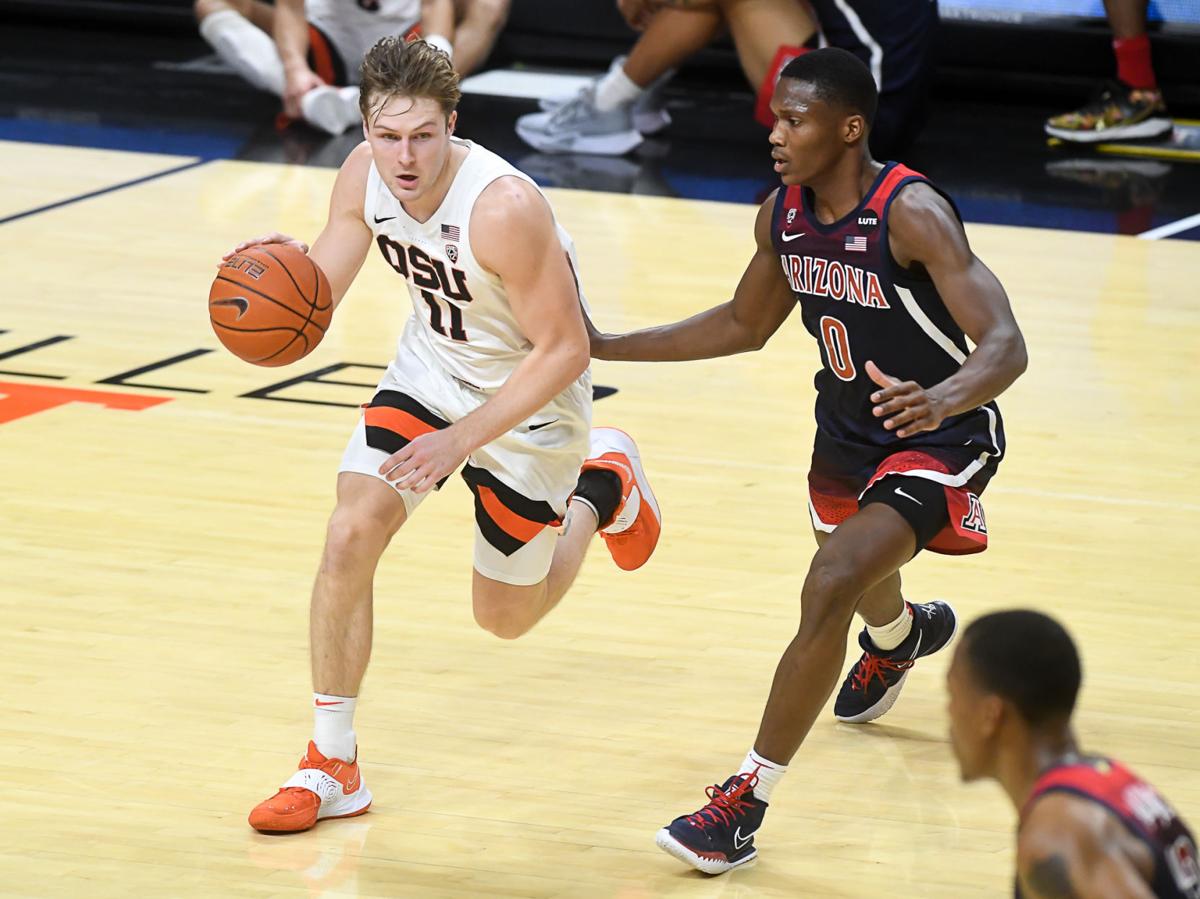 Zach Reichle is among Oregon State's team leaders hoping to lead a turnaround after Thursday's 98-64 home loss to Arizona. 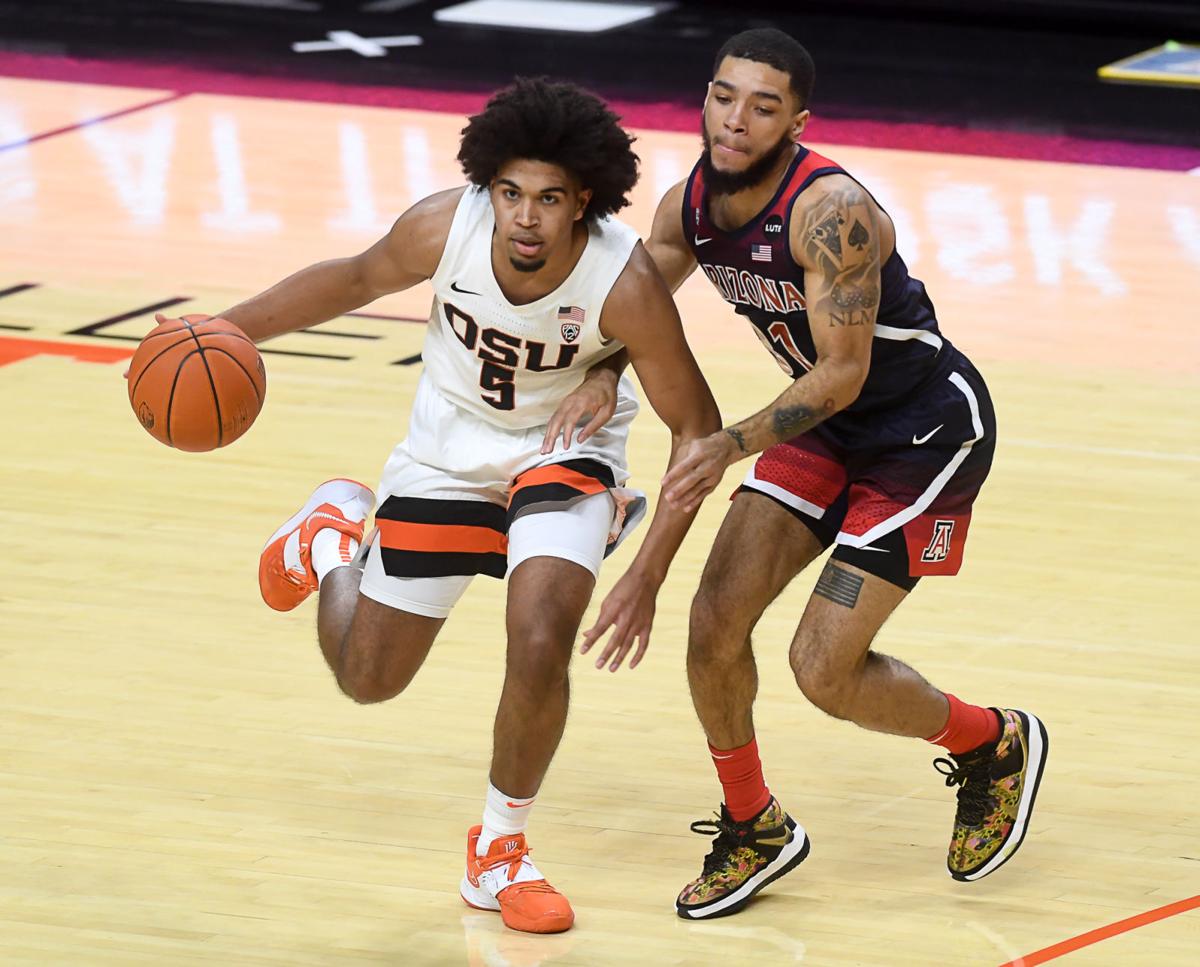 Oregon State senior Ethan Thompson said he will use encouragement to motivate teammates to play better. But, he added, “some guys need to get fired up and yelled at.”

Oregon State men’s basketball didn’t get its regular stretch of summer workouts and the fall lead-up to the season was cut short due to the pandemic.

There were no private scrimmages or exhibition games to further evaluate returning players’ progress and the talent of five newcomers.

But coach Wayne Tinkle says he’s seen enough, and after Thursday night’s 98-64 drubbing by Arizona at Gill Coliseum there may be some moves in the near future.

“We’ve got a pretty good body of work now, 10 games,” Tinkle told the media after the game. “So now the timing’s right. If we feel like we’ve got to make some changes and guys have earned those opportunities, now is the time to do it. It’s not panic time.”

Whether that means a different starting lineup or more playing time for some and less for others, or both, will be learned Saturday.

The Beavers were playing for the first time in 10 days after the program was paused for a week due to COVID-19 test results and contact tracing protocols. OSU (5-5, 1-3 Pac-12) had just two practices to prepare for the Wildcats (10-3, 4-3).

The Beavers, by their accounts, had a good Wednesday practice and assistants told Tinkle that pregame warmups went well.

“But they (the Wildcats) came out and pinned their ears back and we didn’t respond,” Tinkle said.

Slow starts have been a recurring theme for this team. Arizona scored the first 15 points as Oregon State missed its first 10 shots, and the Wildcats extended that to a 23-4 lead as the home team started 2 of 16. The Beavers got no closer than 16 from there and trailed by as many as 36 in the second half. Arizona was without second-leading scorer Jemarl Baker Jr., a junior guard out for the season after breaking his wrist last week.

Oregon State is leaving it to its senior leaders and upperclassmen to take the keys to the bus, as Tinkle describes it, and lead a turnaround.

“Just got to keep going back to work, stay positive, learn from our mistakes,” senior guard Zach Reichle said. “I’ve got to be better. We’ve all got to be better. I don’t think it’s one guy. As a cohesive unit it’s on all of us to get better with each other and trust each other more and play more as a team.”

Senior guard Ethan Thompson said the team is full of different personalities and it will take time to figure out how to motivate every player. It will be more encouraging words than anything else. But, he added, “some guys need to get fired up and yelled at.”

As a leader, after watching game film Friday and following the coaching staff’s plan going forward, Thompson said he had a path for what came next.

“Talk to the guys individually and bring a lot of energy to practice (Friday) and every single meeting that we have leading up to our next game,” he said.

That next game comes at 4 p.m. Saturday as the Beavers host Arizona State, a team certainly hungry to erase a three-game losing streak. The Sun Devils (4-5, 1-2) have had their own COVID issues, and Saturday’s contest will be just their fourth since Dec. 16. It will be OSU’s fifth.

ASU had its Thursday game in Eugene postponed due to a COVID-related pause in the Ducks’ program. So the Sun Devils will not have played since last Saturday, when their 73-64 home loss to USC completed a sweep by the L.A. schools in Tempe.

Arizona State was without four players last week for various circumstances, including star guard Remy Martin, and it’s uncertain how many will be available Saturday. The program has already announced that Taeshon Cherry is not making the trip for personal reasons.

But Oregon State has too many problems of its own to worry about that.

Tinkle said he was disappointed by his team’s lack of fight and focus Thursday.

He said his players looked physically weak and that they fell behind because it got to them mentally.

The coach said “maybe” so much time off the court played a part.

“But I would love to run my tank empty by going full bore,” Tinkle said. “I think some of the fatigue you saw was a frustration that crept in because we weren’t going as hard as we needed to go and we weren’t as focused as we needed to be. I’ll take blame for not getting our guys ready to play after the pause. But you know what, energy, effort, those are two non-negotiables and the guys know that.”

What happens if the Suns do not have Chris Paul for the Western Conference Finals?

Is there any value in the National League East?

Is there any value in the National League East?

How do the Clippers adjust without Kawhi Leonard for Game 5?

How do the Clippers adjust without Kawhi Leonard for Game 5?

OSU men's basketball: Beavers no match for Wildcats from terrible start to finish

Wayne Tinkle has said for weeks that his team can’t keep playing catch-up if it hopes to succeed.

It’s only taken three weeks, but there’s already separation being created in the Pac-12 men’s basketball standings as the top teams begin to m…

OSU men's basketball: Program on pause due to COVID-19 test results and protocols

OSU men's basketball: A look at the opponent — Arizona State

Oregon State men’s basketball announced on Monday the signing of forward Ahmad Rand, a 6-foot-8 junior forward and transfer from the Universit…

Oregon State experienced Saturday what a balanced offensive effort can do, especially in taking some of the pressure off senior guard Ethan Thompson.

OSU men's basketball: A look at the opponent — USC

USC comes to Oregon State on Tuesday for a Pac-12 men’s basketball game carrying a six-game winning streak. Here’s a look at the Trojans.

Pac-12 men’s basketball has become the haves and the have-nots.

Zach Reichle is among Oregon State's team leaders hoping to lead a turnaround after Thursday's 98-64 home loss to Arizona.

Oregon State senior Ethan Thompson said he will use encouragement to motivate teammates to play better. But, he added, “some guys need to get fired up and yelled at.”