OSU men's basketball: Improved defense, inside and out, leads to team's turnaround
Share this
{{featured_button_text}}
1 of 2 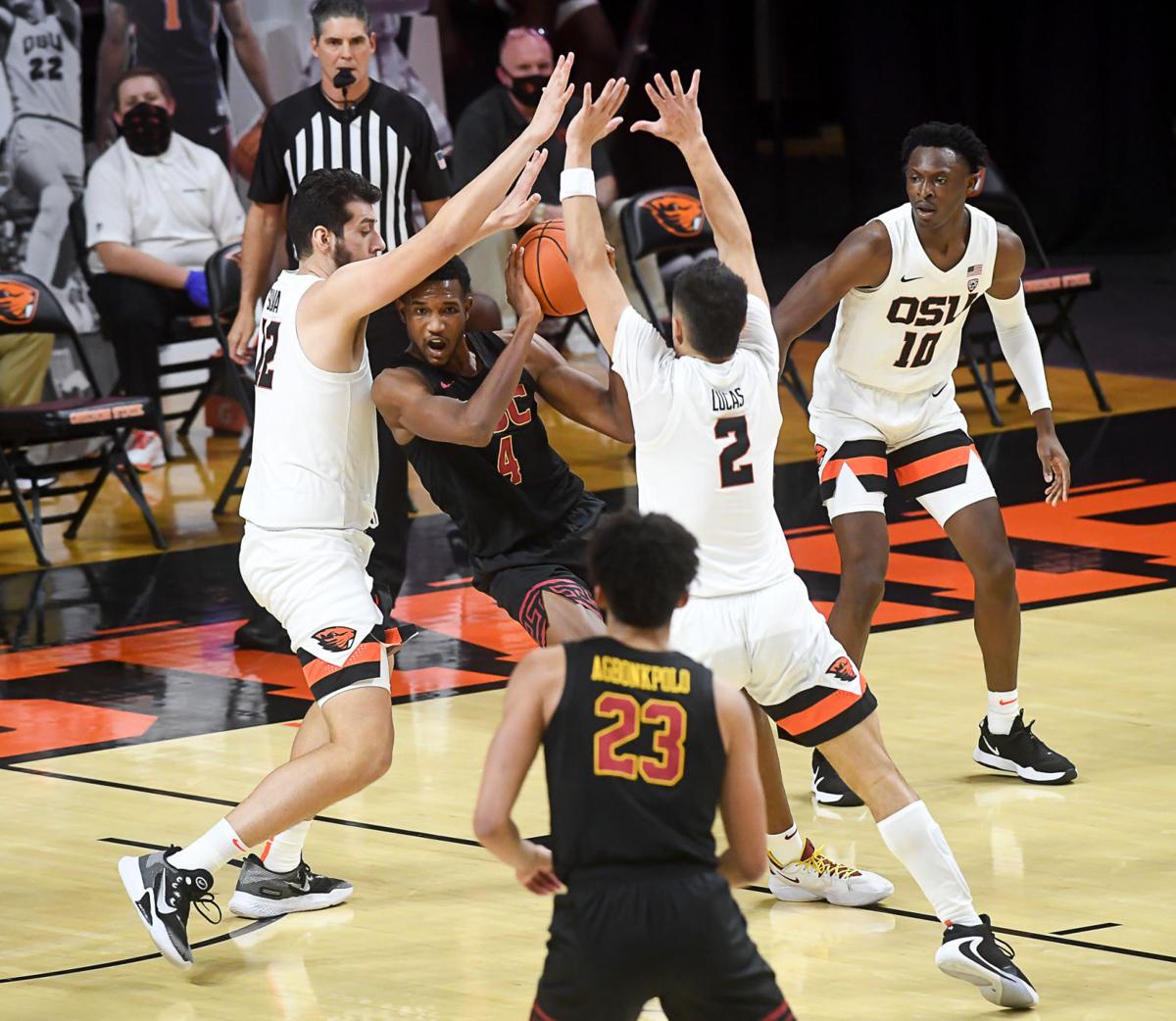 Roman Silva (12), Jarod Lucas (2), Warith Alatishe (10) and the Beavers have turned up their intensity and focus on the defensive end recently, leading to a two-game winning streak. 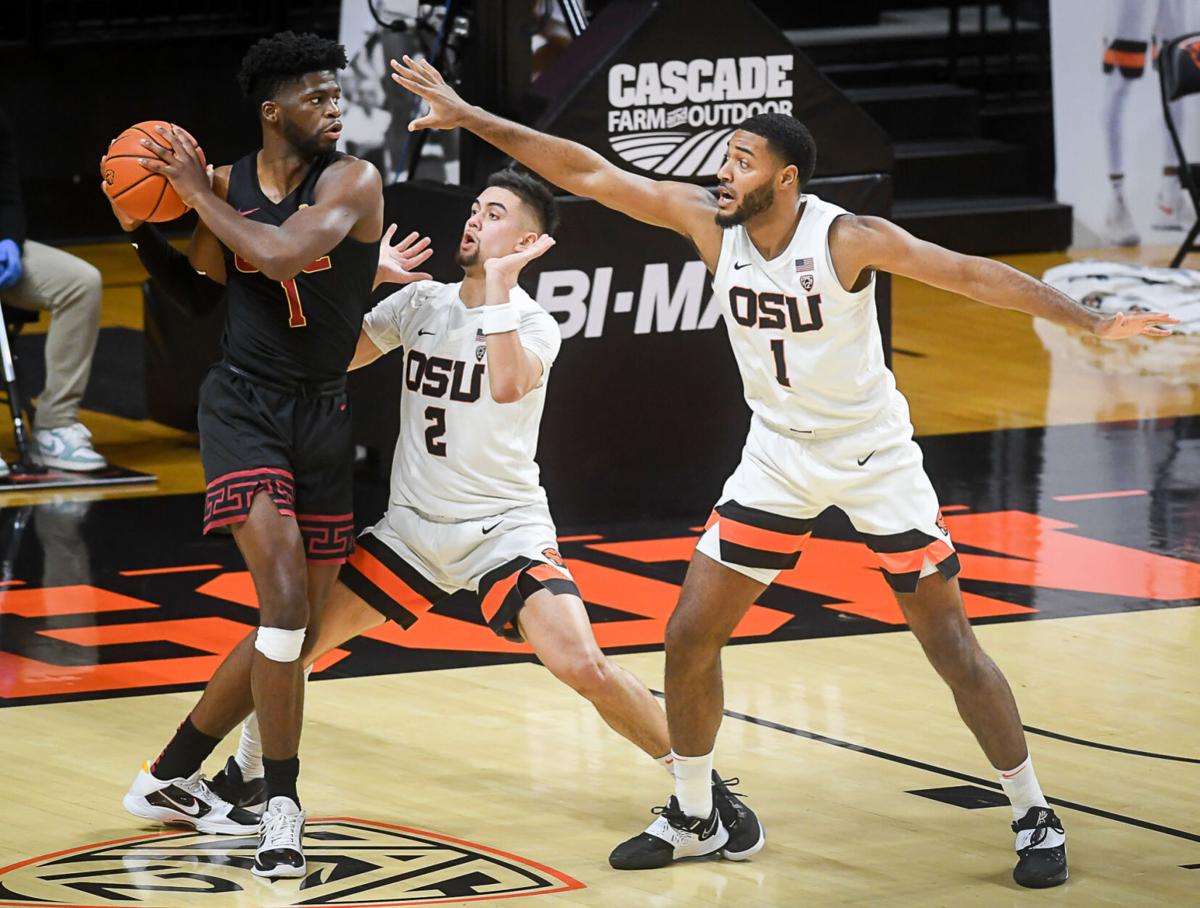 Ethan Thompson prides himself on defense.

Beavers coach Wayne Tinkle said Thompson has been that for his team more than ever the past two games in wins against Arizona State and USC, sparking a turnaround that has OSU holding its collective heads high after some disappointing Pac-12 men’s basketball losses.

Tinkle says Thompson, because of his role as the Beavers’ leading scorer, has been a little “protective” on the defensive end. That has changed in the last week.

“He’s taken on a whole new challenge to himself, wanting and understanding how key it is to be a stopper and maybe a dominant force defensively as much as offensively,” the coach said.

Tinkle points to the second half of the 98-64 home loss to Arizona, where he says Thompson displayed some of the best stretches of defense he’s played in a Beaver uniform.

That carried over to the following two games, narrow wins against teams picked to finish in the top half of the Pac-12 by media that covers the conference. OSU, now 7-5 overall and 3-3 in conference, was voted dead last.

“There have been more moments where I’ve done it, but now I think it’s becoming a more consistent thing defensively,” Thompson said. “I think setting the tone with my energy on the ball will spread to the other guys as well.”

Tinkle agrees, and he’s urged Thompson to get out of his comfort zone and become a more vocal leader and challenge teammates to play to their potential while continuing to carry that defensive energy.

Thompson said that role is becoming more natural for him.

“I could be willing to take criticism from my teammates because I’m always going to be dishing it out verbally,” he said.

Tinkle said he has often talked to his players, particularly point guards, about the enjoyment in being a force defensively and how that can take pressure off on the other end.

Thompson has bought into that again as of late.

“Now it’s fun to see how it’s filtered to the rest of the guys, young and old. That’s something that we’ve been asking for and waiting for,” Tinkle said.

OSU will head into its next game, Saturday night at No. 21 Oregon (9-2, 4-1), trying to replicate its performance.

Another big part of the turnaround has been the improved health and play of the Beavers’ big men. They’ve provided some help offensively and plugged a hole in the middle of the defense.

Senior center Roman Silva missed more than two weeks and games against California and Stanford due to COVID-19 test results and contact tracing protocols. In the past two games, he’s scored 21 points — including a career-high 12 against USC — on 10-of-11 shooting with five rebounds in 24 minutes.

Junior forward Rodrigue Andela, who saw limited minutes following a foot injury suffered against Stanford on Jan. 4, has put up a combined 15 points and nine rebounds in the last two contests. His line includes 9 of 10 at the free-throw line.

Junior forward Maurice Calloo, a first-year player in the program who struggled to fit in defensively earlier in the season, was on the floor in the final seconds Tuesday as the Beavers made one last stand to hold on for a two-point win against USC.

Tinkle says the improved health has allowed the Beavers to be more physical around the basket at both ends in recent games.

“It’s been the difference in my mind” for the recent success. We knew we’d have depth there, and they all complement each other,” the coach said.

A significant factor is the way they’ve improved in defending screens, he added.

“Having that full group back, and they’re still not 100%, has just made us deeper there and more physical, and as they’ve improved defensively we’ve gotten better defensively.”

Oregon State’s previously postponed games at Colorado and Utah have been rescheduled for a pair of Mondays. The Beavers will play at Colorado on Feb. 8 and at Utah in Feb. 22.

The Colorado game will follow home games against Washington and Washington State the previous Thursday and Saturday, respectively and be played before a trip to the Arizona schools.

The Utah game will be after home games versus Utah and Colorado and before a road trip to California and Stanford. So the Beavers and Utes will play twice in five days.

OSU men's basketball: Defense gets the job done in win against USC

Playing defense the way Oregon State coach Wayne Tinkle wants out of his team has been a work in progress this season.

Pac-12 men’s basketball has become the haves and the have-nots.

Oregon State experienced Saturday what a balanced offensive effort can do, especially in taking some of the pressure off senior guard Ethan Thompson.

Oregon State travels to take on a short-handed Oregon team Saturday night in Eugene. Here’s a look at the 21st-ranked Ducks.

EUGENE — Oregon came with repeated second-half runs, trying to claw itself back in the game from double-digit deficits.

So much for Pac-12 men’s basketball’s top-half teams taking control and the bottom half rolling over.

Roman Silva (12), Jarod Lucas (2), Warith Alatishe (10) and the Beavers have turned up their intensity and focus on the defensive end recently, leading to a two-game winning streak.