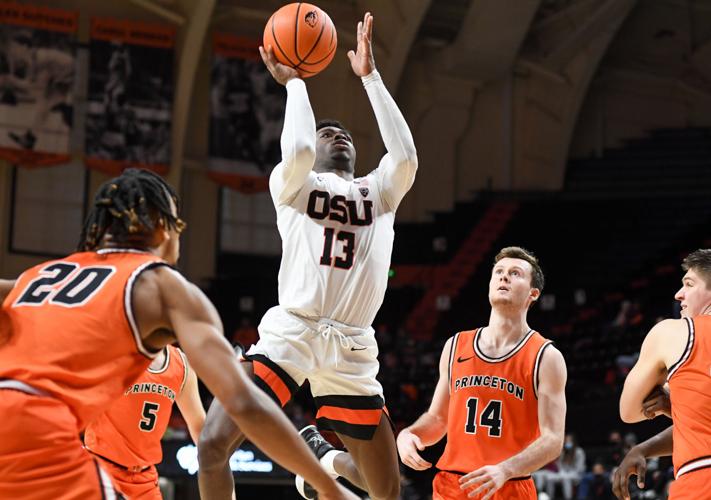 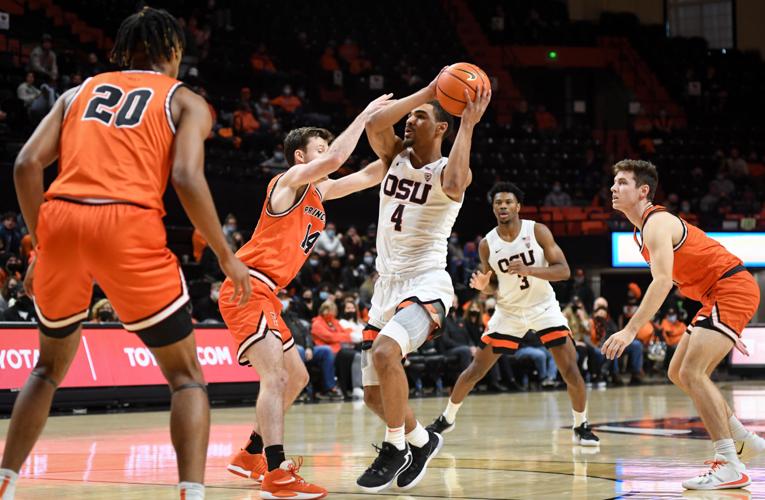 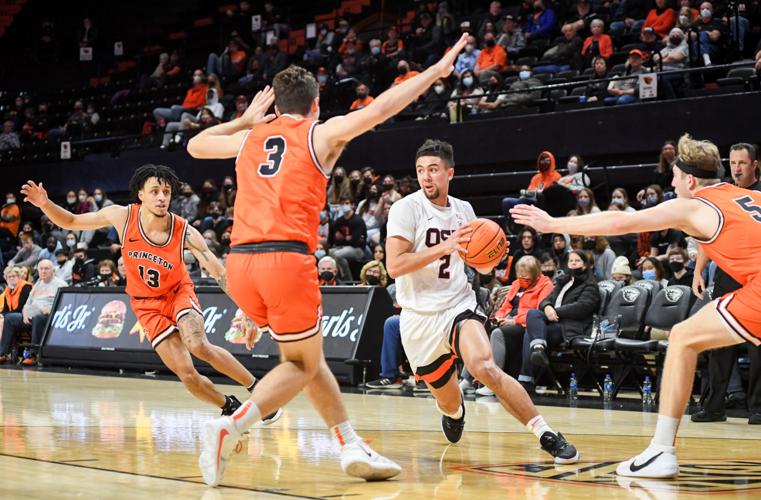 Wayne Tinkle said he believes his team made progress Sunday afternoon in getting closer to the way it needs to play.

Princeton made 13 3-pointers and grabbed 13 offensive rebounds for a 37-28 overall edge on the boards in an 81-80 win in a nonconference game at Gill Coliseum.

The Beavers (1-4) cut an 11-point deficit with 6:30 remaining to one late, but they couldn’t get over the hump to tie or take the lead.

“Night and day with the focus and the energy by a bigger percentage of the guys and it led to a better performance,” said Tinkle, OSU’s head coach, whose team dropped a 78-77 home game to Samford four days earlier.

Timely 3-pointers kept Princeton (4-1) in the lead in the second half after the Tigers made seven long balls before halftime.

A two-point Princeton halftime lead quickly grew to seven as forward Tosan Evbuomwan scored three times inside. The Beavers got it back to three before Ethan Wright hit two straight 3s.

OSU later closed within four only to see Jaelin Llewellyn and Drew Friberg can consecutive 3-pointers. Llewellyn soon nailed another to make it an 11-point game.

The Beavers rallied behind an improved defensive effort and scoring across the board, including five points from Jarod Lucas, whose 3 from the corner with 1:33 left made it 76-73.

OSU had the ball down two with 20 seconds left, but Dashawn Davis missed on a short baseline jumper. Wright made two foul shots on the other end and Lucas’ 3 with 0.5 seconds left created the final score.

“We drew a line in the sand the other day in practice. We’ve got a group of guys that are very, very talented,” Lucas said. “Coach said it, it’s a step in the right direction if we’re going to keep on building. But defensively we still have a couple things to improve on. But I think we did a really good job sharing the ball for a majority of the game.”

Tinkle said areas where his team is still trying to improve defensively include over-helping on shooters and not defending the ball closely enough on handoffs, leading to good long-range looks for opponents.

“Just some errors there to our schemes defensively,” he said. “Some of it’s will and want-to. If it’s you and that guy right there, you’re not scoring on me. We’ve got to develop that a little bit more.”

Offensively, a few bad decisions after the Beavers had closed within five with about 10 minutes to go led to 3-pointers on the other end. OSU went more than four minutes without a field goal as the Tigers pushed their lead to double digits.

Davis and Akanno, both guards in their first year in the program, made their first starts as Beavers. Davis continues to be a key player defensively. He had two steals Sunday.

“Just where I’m from and how I was raised. It’s a gritty, tough style of basketball, that’s what I’m used to,” said Davis, who hails from the Bronx, New York.

Tinkle credits the 6-foot-2 Davis for being a relentless defender who pressures opposing point guards, gets in the passing lanes and doesn’t cost his team by gambling to make a play. The coach says Davis will only get better as he continues to learn his new team’s defensive schemes.

The Beavers now head back on the road for two games at the Emerald Coast Classic in Florida, starting Friday against Wake Forest. They’ll take on LSU or Penn State on Saturday.

With seven newcomers on scholarship, the opening few weeks of the season have been used to gauge who can contribute and in what ways.

“I think we’re at the point now where we’re good with a certain group to roll with,” Tinkle said. “We hope everybody continues to learn and improve to make that a bigger group, but we’re happy with the way the guys got after it. We do not accept defeat, but this was a good learning day for us.”

MCMINNVILLE — A football season that had a lot of questions at the start ended 10 wins later in the state semifinals.

OSU football: Defense stepping up late in the season

Oregon State has found a way to some of its best defensive results late in the season.

Chance Nolan has filled his role the past two weeks, helping Oregon State football gain its bowl eligibility and then improve its postseason s…

OSU men's basketball: Beavers try to dig out of a 1-6 start

There’s plenty to address as Oregon State men’s basketball tries to turn around its season after a 1-6 start.

OSU men's basketball: A look at the opponent — California

Oregon State and California open their Pac-12 men’s basketball schedules Thursday night at Haas Pavilion in Berkeley. Here’s a look at the Gol…

OSU men's basketball: Turnovers, inconsistent play too much against No. 11 Wildcats

Oregon State’s chances at an upset of No. 11 Arizona on Sunday afternoon were done in by uncharacteristic turnovers and a second half where th…