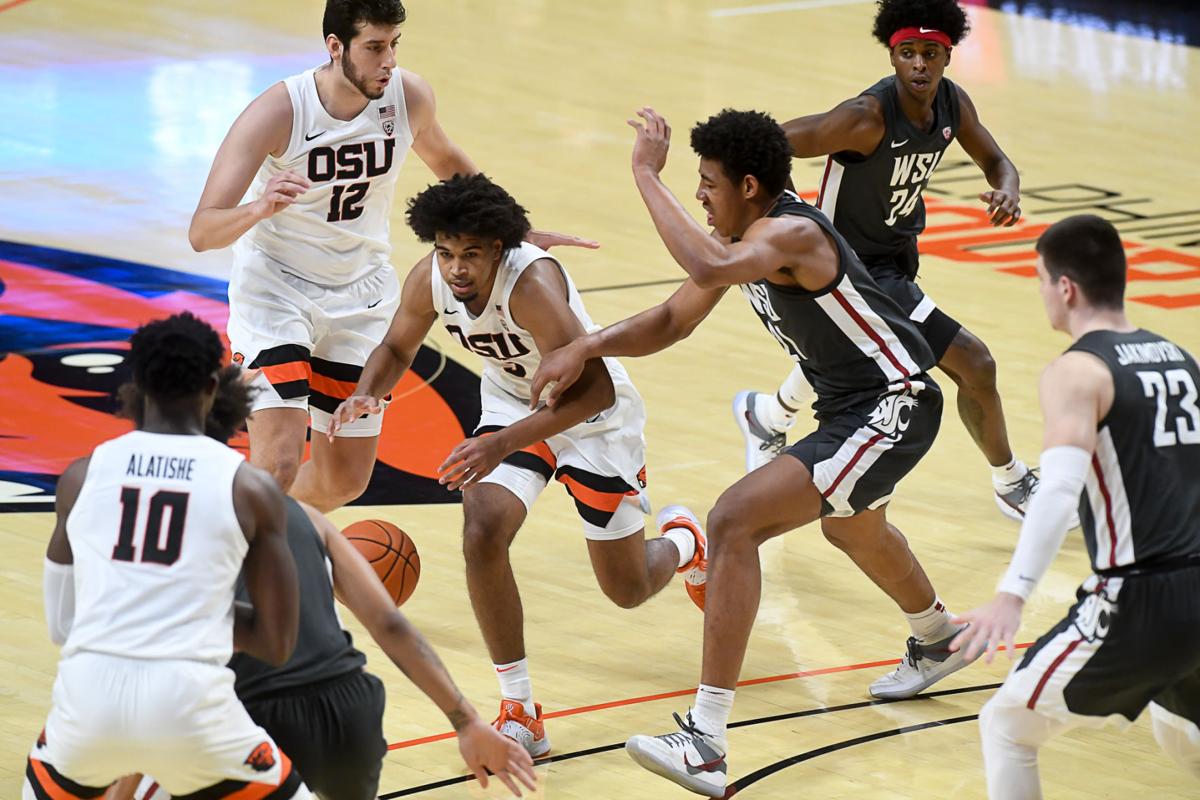 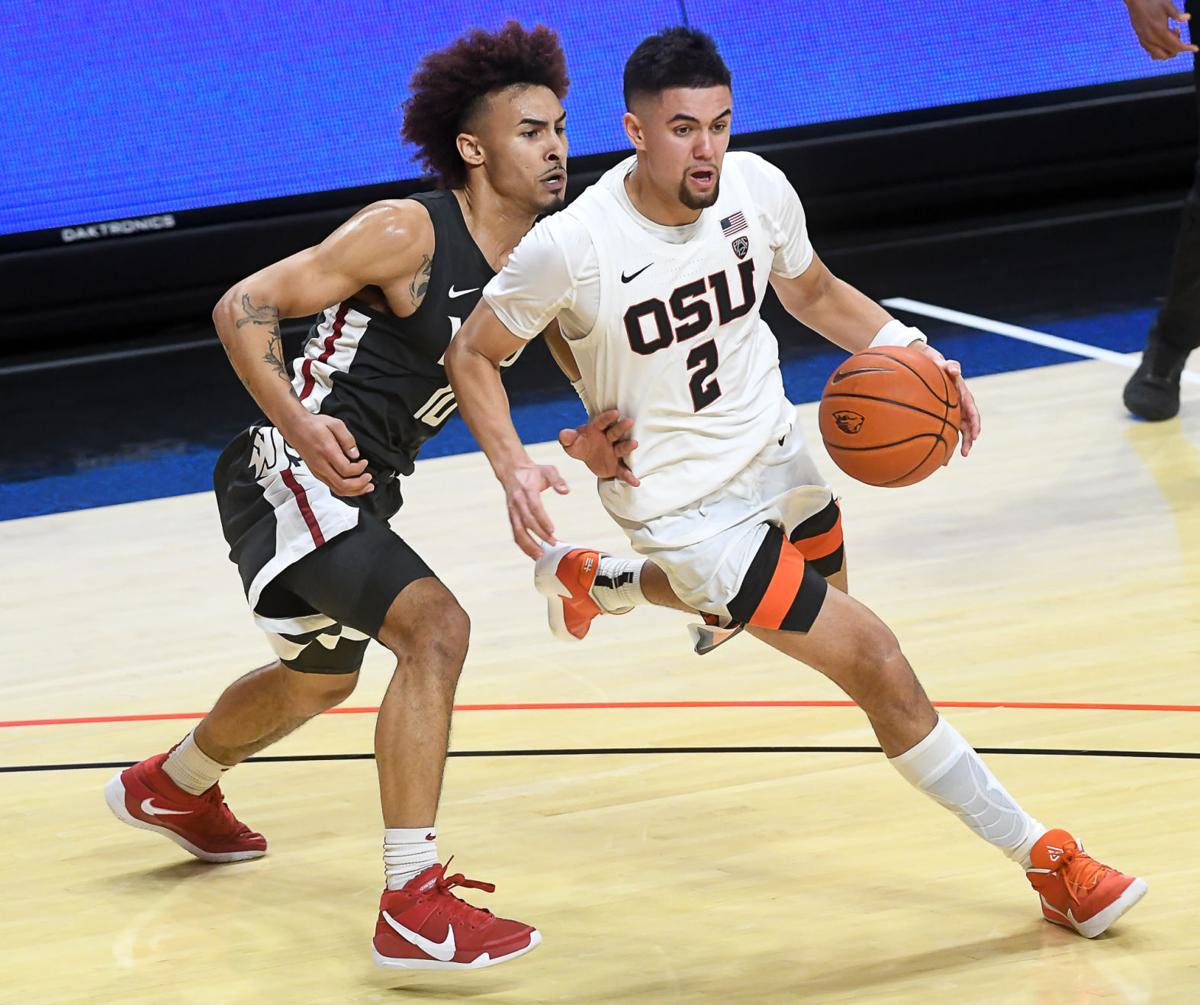 Jarod Lucas (2) shared team-high scoring honors with Ethan Thompson with 13 points in the loss to Arizona. The Beavers are looking for more scoring as a team going into the rest of the season.

Oregon State’s defense gave the Beavers a chance to win Thursday night at Arizona, but the OSU offense and rebounding weren’t up to the task.

The Wildcats opened the second half shooting 3 of 15 in nine minutes, and the Beavers were unable to cut even one point from their eight-point halftime deficit in what turned out to be a 70-61 loss in a Pac-12 men’s basketball game at McKale Center.

Arizona had a 47-34 rebounding edge, including 15 offensive boards. The Wildcats, who lead the conference in rebounding margin, had a 23-13 advantage in Thursday’s second half.

OSU followed up two of its best shooting games in conference play in home wins against Washington (49.2%) and Washington State (46.5) with two of its worst in losses at Colorado (32.7) and Arizona (37.5).

With seven games remaining in the regular season, that leaves the Beavers (10-9, 6-7) at a crossroads if they hope to make a push for a top-half finish in the conference standings. They finish their three-game road trip Sunday at Arizona State to complete the first half of a February schedule that includes 10 games in 24 days.

Thursday in Tucson, OSU settled for 19 first-half 3-point attempts, making five. After halftime, the Beavers put up just four tries from deep, but they didn’t attack the basket regularly during and after they closed a 13-point deficit to four with five minutes left.

“We fought really hard to get back in it and then I thought we made some bad decisions,” Beavers coach Wayne Tinkle said. “Instead of continuing to spread the floor and work on our drive-and-kick game, we could have really dug into that thing and maybe even take the lead.”

Instead, Arizona took advantage of four straight misses by Oregon State to widen the gap.

The Beavers’ defense seemed to have turned the corner, holding three of the last five opponents to 40% shooting or lower after giving up 50% or better to four straight Pac-12 opponents earlier in the season. OSU continues to lead the conference in 3-point percentage defense in all games at 30.4 while second in Pac-12 games only at 31.8.

The offense, though, has been sporadic at best.

In free-throw attempts, Oregon State is seventh in the Pac-12 for the season at 20.1 per game and seventh in conference games only (17.1). Opponents have had more foul shot attempts than OSU in 11 of 19 games this season and 10 or more additional tries in four contests, including Arizona’s 34-10 advantage Thursday.

“We settled for a lot of jumpers and mid-range shots. So I think that does speak to a little bit of the disparity for sure,” Tinkle said.

At 75.8% at the free-throw line, the Beavers are still on pace to break the single-season school record, set last season at 75.1.

But they’ve shot below their season mark in four of the past five games, including a combined 15 of 26 (57.7%) the last two contests. Opponents have outshot Oregon State by percentage in all five of those games.

Thompson needs 15 assists to pass Darryl Flowers (1982-86) and Deaundra Tanner (1997-01) for third on the Beavers’ career list. But he’ll have to pick up the pace after recording just one assist in each of the past two games.

OSU men's basketball: Not enough offense, too many fouls doom Beavers in Tucson

Too many missed shots and fouls kept Oregon State from again turning its season in the right direction.

Warith Alatishe has found plenty to motivate himself when it comes to basketball.

This is a statement week for a lot of teams in Pac-12 men’s basketball.

OSU men's basketball: A look at the opponent — Arizona State

Oregon State goes for its first two-game season sweep of Arizona State since the 2006-07 season. Here’s a look at the Sun Devils.

Oregon State’s second-half surge, with the Beavers trying to avoid a 0-3 road trip, came up just a little short.

Jarod Lucas (2) shared team-high scoring honors with Ethan Thompson with 13 points in the loss to Arizona. The Beavers are looking for more scoring as a team going into the rest of the season.