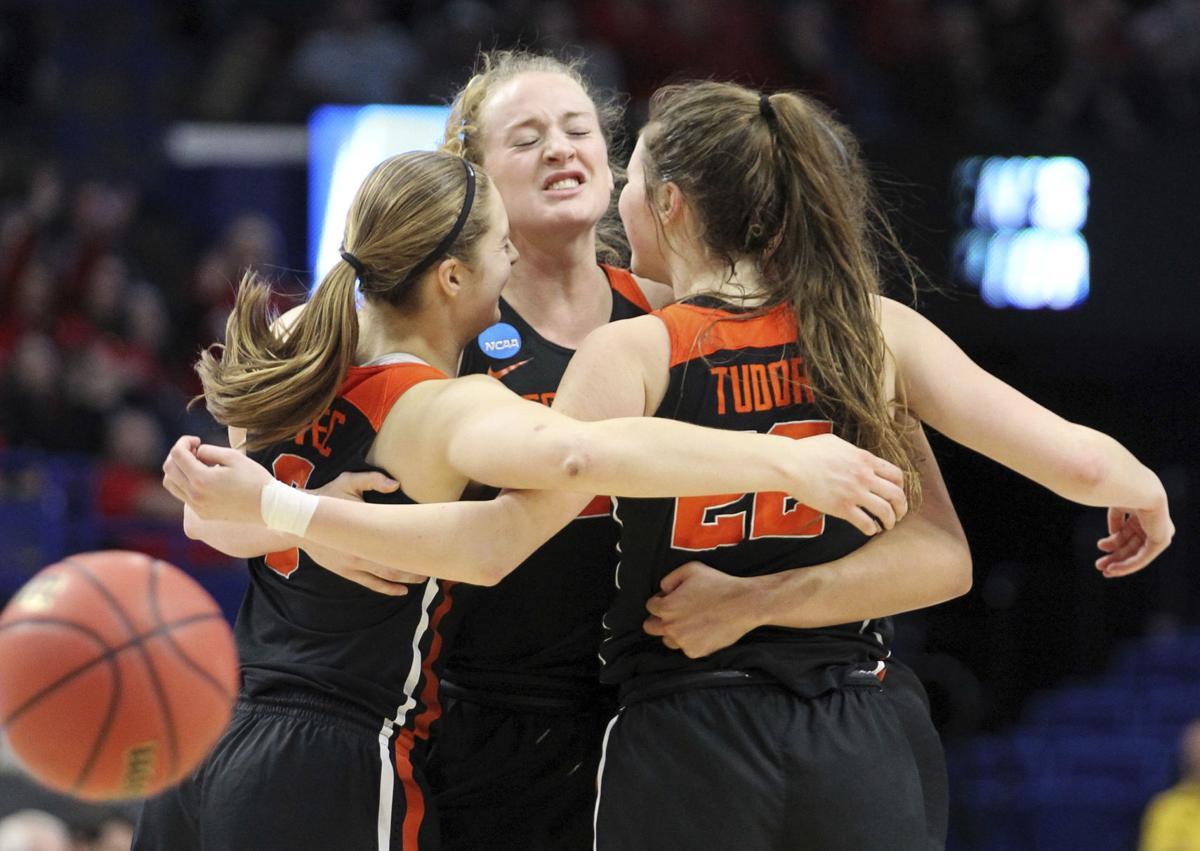 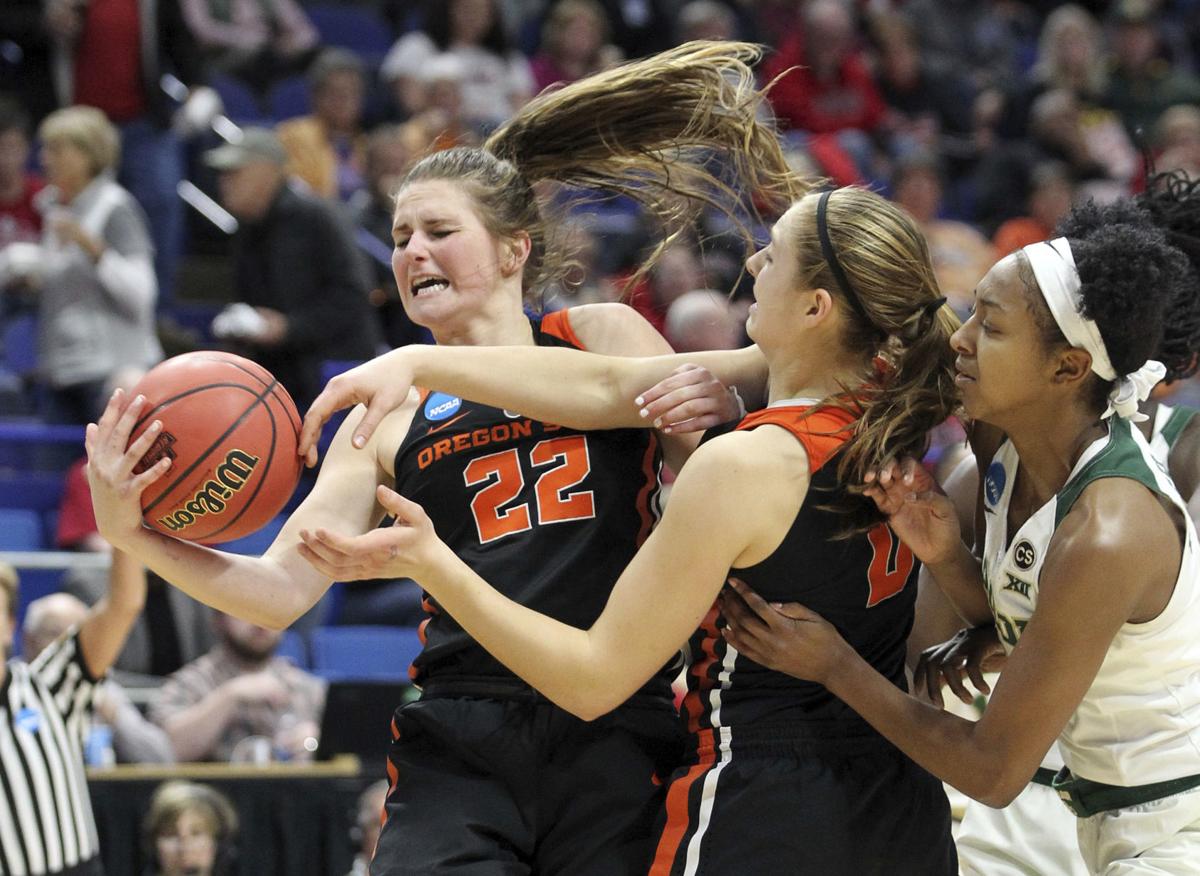 Oregon State's Kat Tudor (22) pulls in a rebound near teammate Mikayla Pivec and Baylor's Didi Richards during the second half. 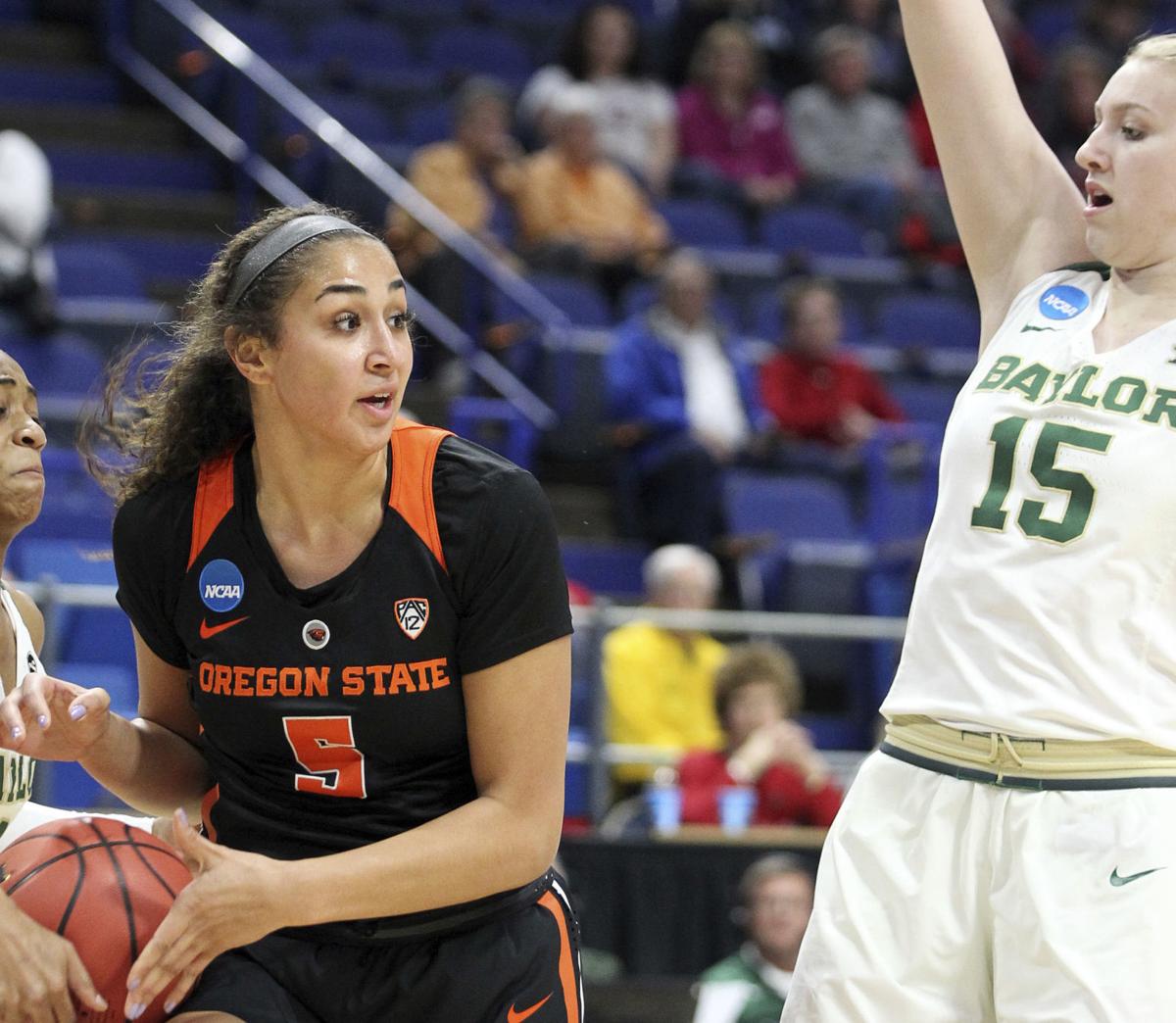 LEXINGTON, Kent. — Katie McWilliams has been content to play the role of distributor during her Oregon State career.

But on Friday night with the Beavers clinging to a two-point lead in the closing seconds, the junior guard took one of the biggest shots of her life.

And she made it.

McWilliams’ corner 3 with 19 seconds left helped fend off a late comeback attempt by Baylor and send the Beavers to the Elite Eight of the NCAA women’s basketball tournament.

“It felt really good,” McWilliams said of her 3-pointer. “I didn’t feel like I shot my best throughout the game, so it felt good to get that end-of-the-game shot. After that shot I kind of knew that the game was over and it was just an awesome feeling.”

Oregon State (26-7), the No. 6 seed in the Lexington Regional, advances to the Elite Eight for the second time in three seasons and will play No. 1 seed Louisville at 9 a.m. Sunday for a berth into the Final Four.

No. 2 seed Baylor ends the season 33-2 with its two losses to Pac-12 teams; The Lady Bears also lost at UCLA in November.

“This game had incredible runs to it, and then when that final three went down, our ninth three of the game, Katie knocked that down in the corner after (Mikayla Pivec’s) pass, man, we might actually get this thing,” Oregon State coach Scott Rueck said. “And then what a great feeling the second that buzzer went off, and I'm so happy for this team.”

Marie Gulich once again led the Beavers with 26 points and nine rebounds while Kat Tudor chipped in 16 points and eight rebounds. Taya Corosdale had 11 points.

Kalani Brown had 19 points to lead Baylor, but had just six in the second half. Lauren Cox had 15 points before fouling out and Alexis Morris added 14 and Dekeiya Cohen 12.

“Defensively my goal was just to keep her off the block, to just take away her left hand, and to not make it easy on her,” Gulich said of guarding Brown, the Big 12 player of the year. “She’s a really tough person to guard, and I'm proud that we as a team accomplished that.”

Gulich scored 16 of her points in the second half and was 10 for 17 from the field for the game.

“I just thought the kid shot lights out,” Baylor coach Kim Mulkey said. “… You know, that's what seniors do. She was the best player on the floor, and she carried her team basically. She really did. She carried them in that she made everybody else better. She gave them good looks, good shots, one more rebound. I was very impressed with her.”

Up 49-47 going to the fourth, the Beavers opened the period with a Tudor drive, Gulich three-point play and two free throws from McWilliams to take a 56-48 lead with 7:52 left.

But that was the last field goal the Beavers would make until McWilliams’ shot that proved to be the dagger.

“As the shot clock was winding down, I tried to attack to see whether either I had my shot or whoever helped kick it out, and once I attacked, I saw Natalie (Chou) helping, and so I just kicked it, and I know Katie is a great shooter, and I was confident in her ability to hit that,” Pivec said. “And I was happy she did."

The Lady Bears fought back and got to within 69-67 on a second straight 3 by freshman Morris with 40 second left.

After the teams traded timeouts, the Beavers worked the offense to free McWilliams for the shot that sealed it.

Oregon State outscored Baylor 20-16 in the third to turn a two-point halftime deficit to a two-point lead.

The Beavers went 8 for 14 from the field and were 3 for 6 from 3. Gulich had seven and Tudor six in the period.

Gulich had eight points on 4-for-6 shooting while Corosdale and Tudor had five each.

Brown had five points on 2-for-6 shooting while Cohen chipped in six as Baylor was 7 for 15 from the field.

The Beavers built a 25-19 lead on Gulich’s turnaround jumper with 7:35 to play in the half.

Pivec picked up her second foul on a charge with 5:40 left in the half and didn’t return until the start of the third quarter.

The Beavers finished the half 10 for 29 from the floor but just 3 for 12 in the second quarter.

Gulich led the Beavers with 10 points while Corosdale and Tudor each had five.

Despite holding a lead, Baylor missed a number of easy shots in the first half.

That proved to be big later.

“Whoever hits shots, makes shots, executes, you know, does what you have to do to win is going to win,” Mulkey said. “We couldn't score the basketball. … It's partly what we just missed, but give your opponent credit. I believe in giving your opponent credit”.

The loss snapped Baylor’s 30-game winning streak, marking the second time in as many games the Beavers ended an impressive streak — OSU handed Tennessee its first ever NCAA tournament home loss on Sunday in Knoxville, Tennessee.

The adage that offense scores points and defense wins championships has been around for quite some time.

OSU women's basketball notebook: Beavers, Cardinals, play inside out and outside in

Oregon State can beat you inside with Marie Gulich or outside with the likes of Kat Tudor, Katie McWilliams and Mikayla Pivec, among others.

Oregon State's Kat Tudor (22) pulls in a rebound near teammate Mikayla Pivec and Baylor's Didi Richards during the second half.