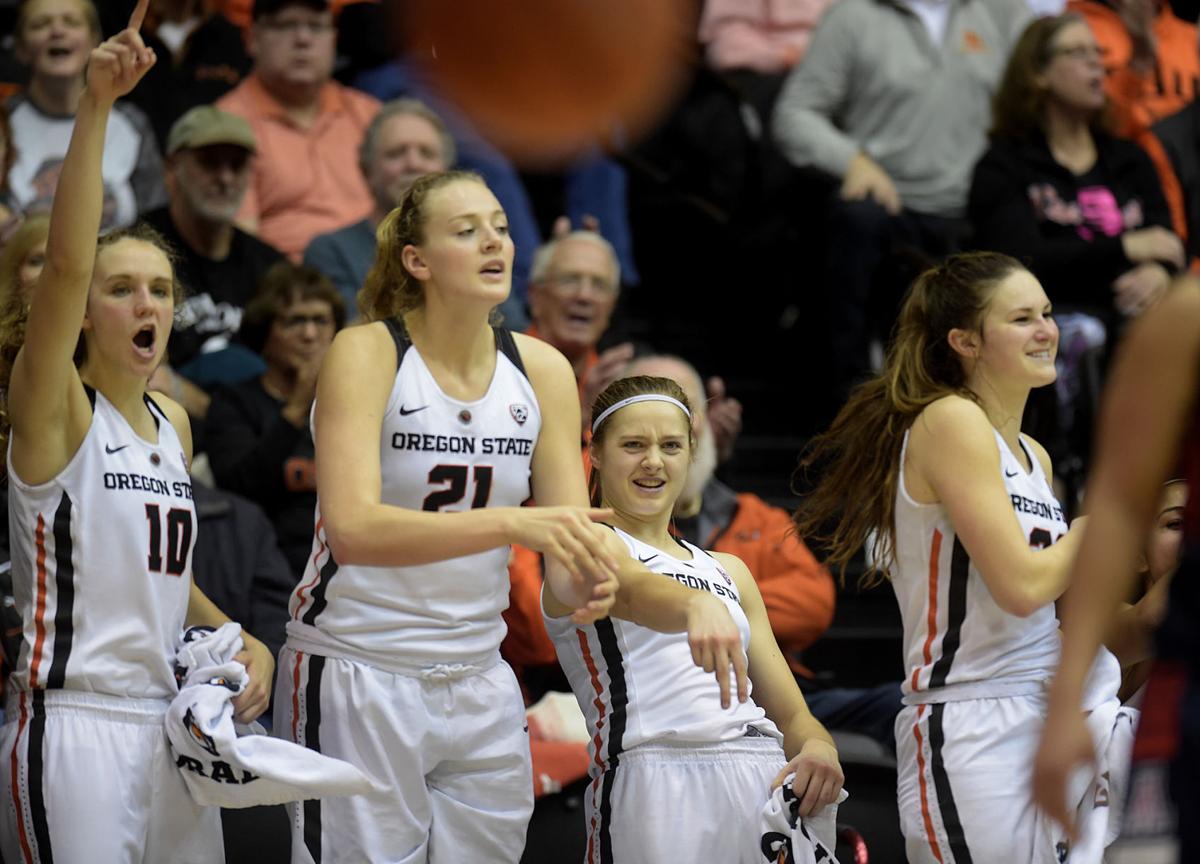 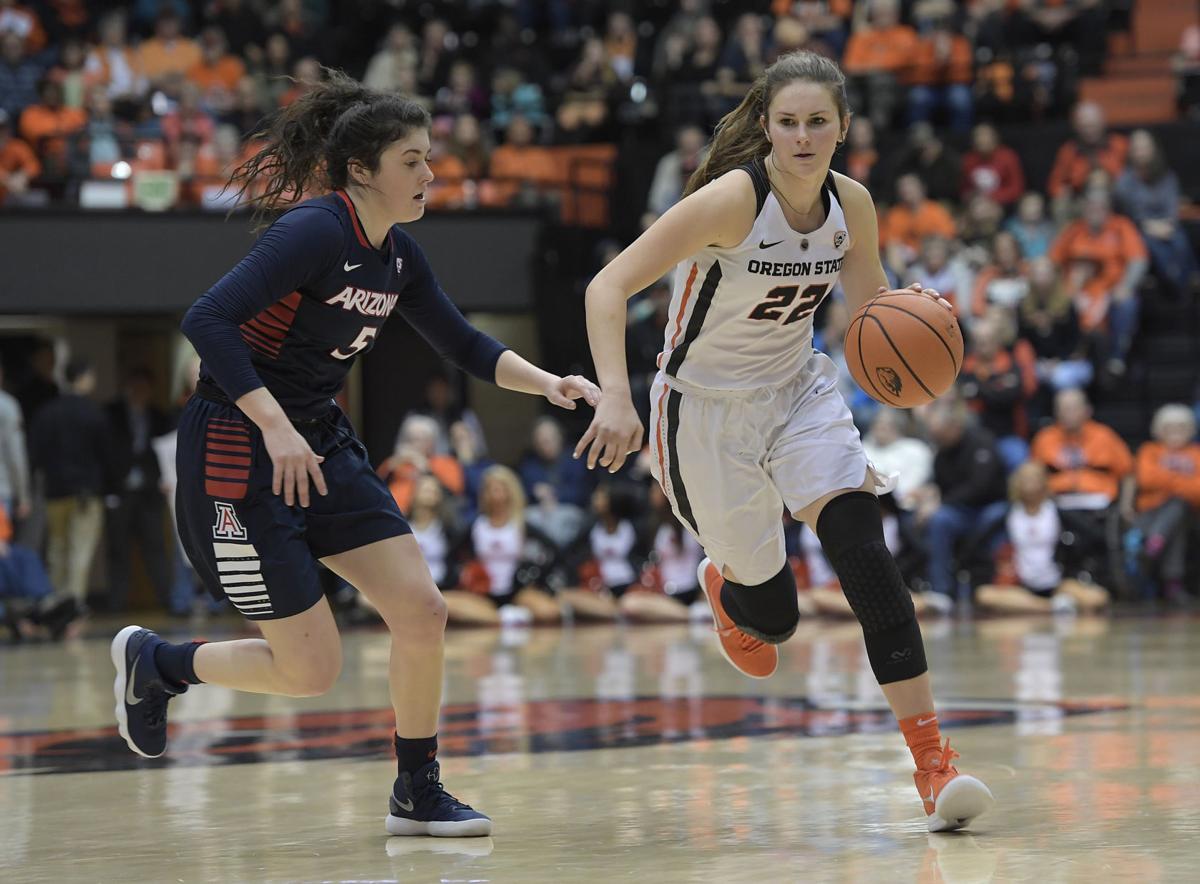 Oregon State's Kat Tudor looks to get past the defense of Arizona's Sammy Fatkin on Sunday. Tudor was 6 for 8 from 3 and scored a game-high 18 points. 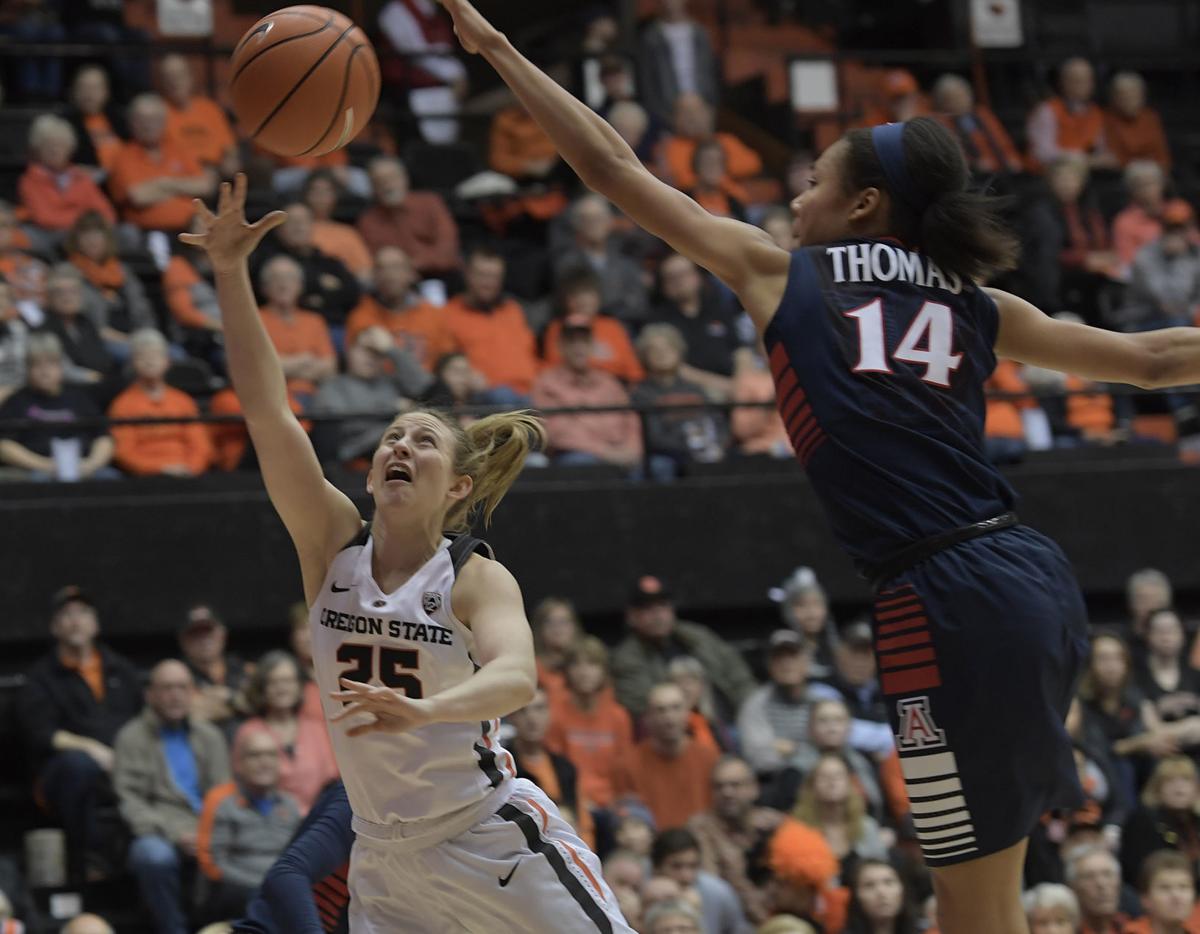 Sammy Fatkin had just hit a 3-pointer to cap a 17-5 run for Arizona that gave the Wildcats a 23-20 lead with 6:39 left in the second quarter on Sunday.

Oregon State coach Scott Rueck was not pleased as he had watched his team make three straight defensive errors.

So he called a timeout to ask the players why they lost their edge defensively and allowed the Wildcats to get comfortable.

“We lost a little bit of focus, I thought, and so … the purpose of the timeout was that’s enough and we’ve got to get back to what we do,” Rueck said. “We’ve worked too hard in preparation for this team to allow them to do what they want to do. We needed to control things a little bit more.”

The message was received loud and clear.

The No. 22 Beavers smothered Arizona from that point and pulled away for an 88-48 Pac-12 win over the Wildcats before a crowd of 4,226 inside Gill Coliseum on Sunday afternoon.

Kat Tudor led a balanced attack hitting 6 of 8 3-pointers for a game-high 18 points. Taya Corosdale and Marie Gulich each had 13 while Mikayla Pivec chipped in 10 (as well as nine rebounds and eight assists), Aleah Goodman nine and Joanna Grymeck and Taylor Kalmer eight each.

“I thought our intensity was completely different after that and it needed to be,” Rueck said of his players’ reaction after the timeout. “The team responded well and it was just a moment to refocus.”

The Beavers definitely clamped down defensively, not allowing the Wildcats to hit another field goal in the half.

Arizona was 0 for 8 from the floor after the timeout after having hit 7 of 10 shots immediately before.

Gulich said the timeout was essential to refocus.

“I think from that moment on we got back to the mentality we had on Friday (a 57-54 win over No. 18 Arizona State), just locked in on defense, not getting scored on and then executing on offense,” she said.

While the Wildcats couldn’t score, the Beavers finally began to get in a rhythm offensively.

The turnaround began with 3:13 left in the second quarter after Rueck received a technical foul with the Beavers up 28-25.

The Wildcats hit both technical free throws to get within one, but the Beavers closed the half on a 10-0 run for a 38-27 lead.

The third quarter belonged to the Beavers, who hit five 3s and outscored the Wildcats 25-8.

Tudor and Katie McWilliams hit 3s to open the quarter and push the Beavers lead to 17. Goodman got in on the act, hitting two and Tudor added her fifth as the Beavers continued to increase the advantage.

The Wildcats continued to find it hard to convert offensively and finished 3 for 17 in the quarter, making them 3 for their last 25 since Rueck’s second-quarter timeout.

The Beavers outscored the Wildcats 35-8 over that stretch.

“We knew we had to take it to them because the first half was a little shaky,” Tudor said of the second half barrage. “I think we just knew we had to knock them down and just make a statement.”

"I just thought we saw the floor better. It just takes a while," he said. "… I thought we responded just better and we were just more comfortable. It took us a while and each quarter it got better."

The Beavers have won 13 straight against the Ducks; the teams play at 5 p.m. Jan. 21 at Oregon.

Arizona (4-12, 0-5) gets a second crack at Colorado and Utah after being blown out by both on the road.

There was nothing easy about the last week for the Oregon State women’s basketball team.

Marie Gulich was not about to be denied.

Oregon State's Kat Tudor looks to get past the defense of Arizona's Sammy Fatkin on Sunday. Tudor was 6 for 8 from 3 and scored a game-high 18 points.