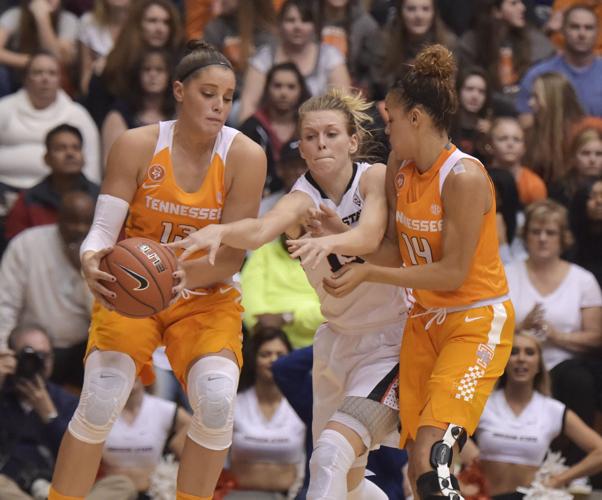 Oregon State guard Jamie Weisner tries to steal the ball from Tennessee’s Kortney Dunbar during Saturday’s game in Corvallis. Tennessee held on for a 53-50 win. 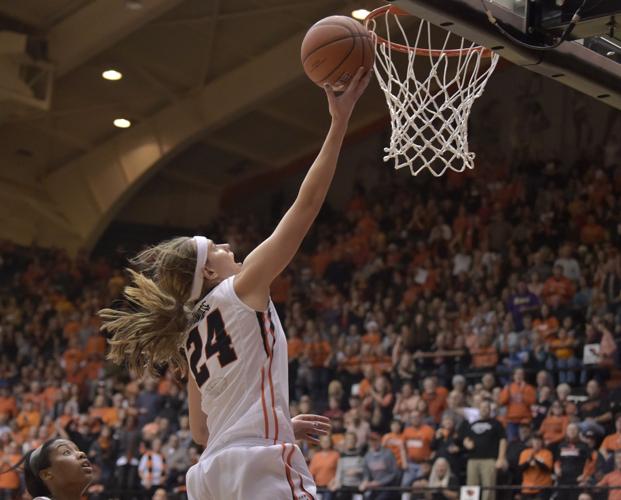 Sydney Wiese had 17 points, five rebounds and two steals in the loss. 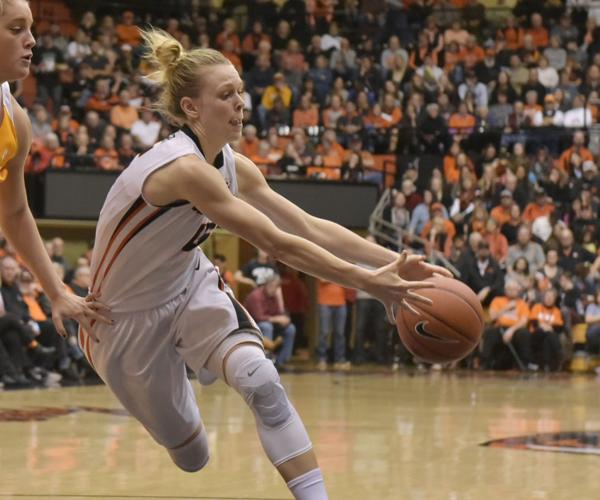 Jamie Weisner scrambles to recover a loose ball against Tennessee. Weisner finished with 16 points and 12 rebounds. 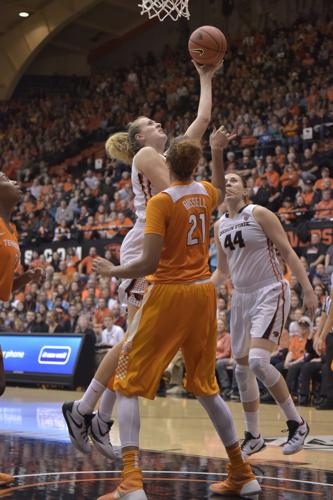 In a game the No. 7 Oregon State women’s basketball team looked like it had no business winning at the half, Jamie Weisner and Sydney Wiese nearly willed the Beavers to a come-from-behind victory.

But as valiant an effort as Weisner put forth, her 3-pointer as time expired was long and the Beavers lost a heart-breaking 53-50 decision to No. 14 Tennessee before an electric and energized Gill Coliseum crowd of 8,223 on Saturday night.

The Beavers trailed by 17 at the break and Scott Rueck and the coaches took a minute longer than normal before walking into the locker room.

What Rueck heard was a positive group of players not ready to give in.

“There was hope, there was energy,” he said. “There was, this is what we have to do better. It was all positive, it was all, let’s do this, we can do this.

“They came out with a different level of energy and focus and fight, I thought.”

After spotting the Lady Vols (8-3) the first two points in the third quarter to go up by 19, the Beavers (8-1) rallied behind two of their leaders.

Weisner and Wiese each scored 10 to combine for 20 of the Beavers’ 22 points in the third quarter to cut the deficit to 45-40 heading into the fourth quarter.

“I think it just really showed us that we need each and everybody on this team to be at their best and we need to come together as one,” Weisner said. “We really haven’t had that situation and that’s when we started rallying is when we were getting stops defensively and everyone was on the same page offensively and we were making hustle plays. We were just one team together and that’s when we’re at our best.”

As good as the Beavers were in the third quarter, and for all the chances they had to complete the comeback, it was not meant to be on this night.

OSU had four offensive rebounds to keep a possession alive down 51-50 in the closing two minutes, but couldn’t convert.

After a turnover, Tennessee’s Diamond DeShields hit two free throws — she had been 0 for 6 to that point — with 34 seconds left to give the Lady Vols the three-point advantage.

Weisner had one more chance to tie the game but couldn’t convert on a night the Beavers were just 4 for 24 from 3.

“I think I got a pretty clean look,” she said. “I mean Mercedes (Russell) kind of closed out on me and obviously she’s very long so I kind of had a fade on it and I had to shoot over her arms. That’s the best look we’re going to get in that situation.”

Despite entering the game having lost three of five, it was the Lady Vols who were the more physical, aggressive and confident team.

The Tennessee defense held the Beavers nearly 30 points below their season average.

“We talked a lot about relentless effort,” Tennessee coach Holly Warlick said. “Tennessee has been built on defensive rebounding and I thought our defense set the tone tonight. We weathered the storm and I’m really, really proud of our kids and their effort.”

The Lady Vols used a 9-0 run midway through the first quarter to take a 15-7 lead. Then came runs of 10-0 and 8-0 in the second quarter that didn’t help Oregon State’s cause of getting back in the game.

Neither did an abysmal 7-for-32 shooting performance in the first half. Tennessee was 17 for 31.

“I would have loved to win it but I think this a game that is going to have a say in what this team does the rest of the way,” Rueck said. “I think we grew up a lot today. I loved the fight and the heart and this team has nothing to hang its head about.”

Added Hamblin: “I think we can use this to define the rest of our season. We showed a lot of heart in that second half just rallying together, getting the looks that we wanted and not giving them the looks they wanted on defense.”

Saturday night’s disappointing 53-50 loss to No. 14 Tennessee could be a defining moment for the No. 7 Oregon State women’s basketball team.

Oregon State guard Jamie Weisner tries to steal the ball from Tennessee’s Kortney Dunbar during Saturday’s game in Corvallis. Tennessee held on for a 53-50 win.

Sydney Wiese had 17 points, five rebounds and two steals in the loss.

Jamie Weisner scrambles to recover a loose ball against Tennessee. Weisner finished with 16 points and 12 rebounds.