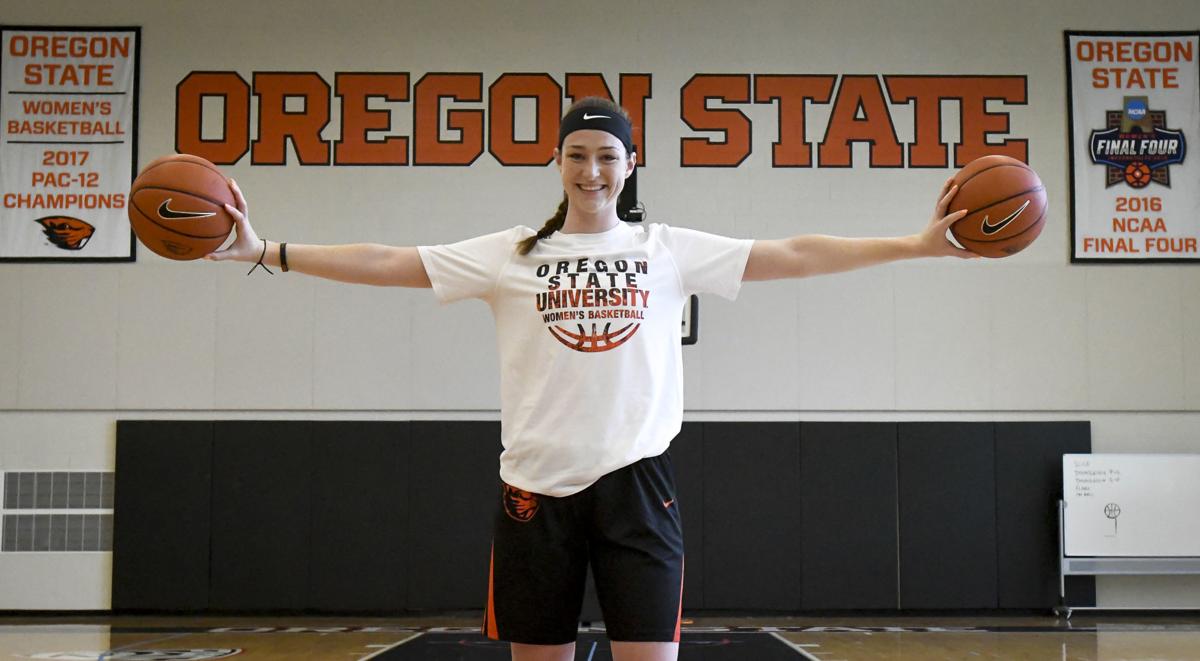 Kennedy Brown knows her freshman season at Oregon State will be one of learning and growing, but her end goal is to be one of the best players to ever put on the uniform for the Beavers. 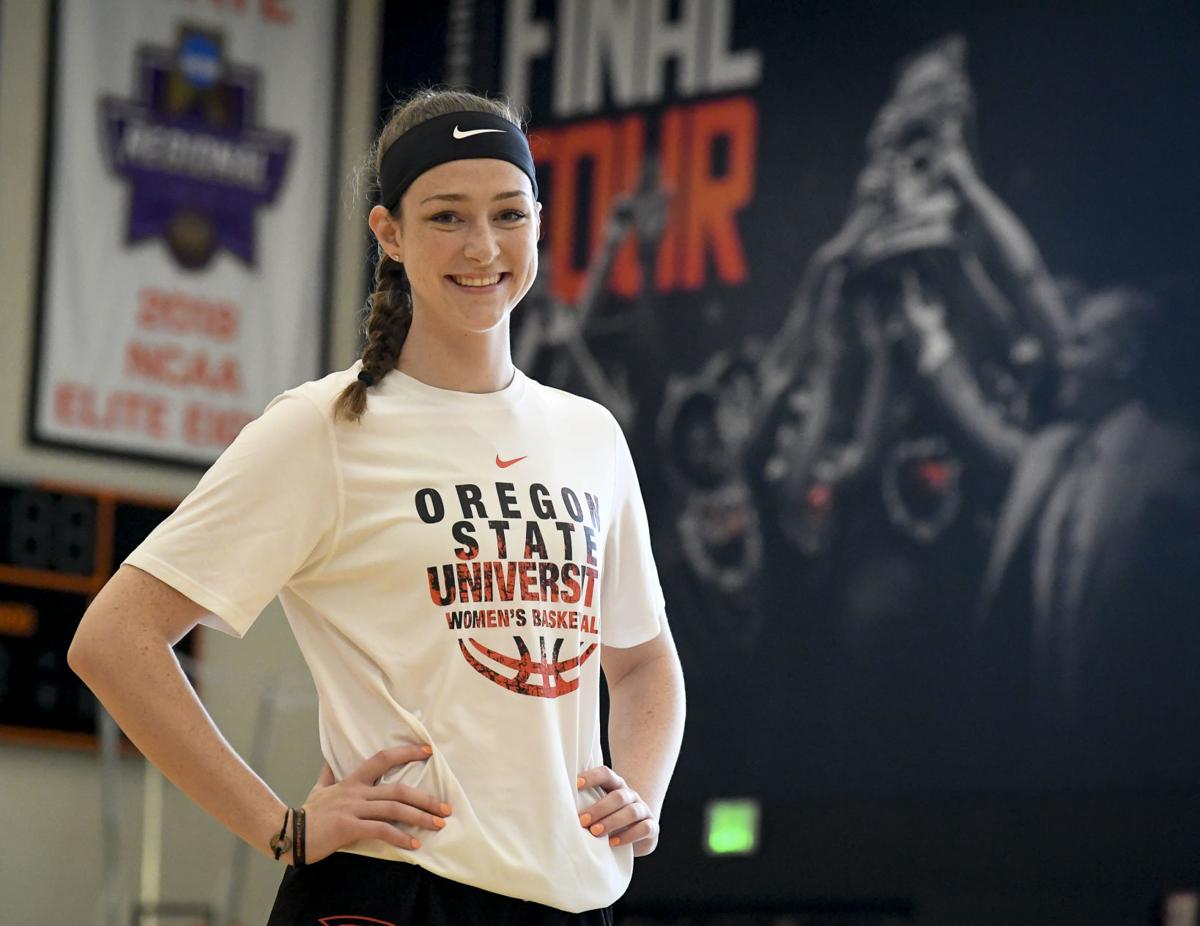 Kennedy Brown said she enjoys playing on the outside, especially being able to hit 3-pointers in transition. A freshman, Brown will likely get the chance to play inside and outside for the Beavers.

In some of her early conversations with Oregon State women’s basketball coach Scott Rueck, Kennedy Brown admitted she wanted to play at a university far away from her hometown of Derby, Kansas.

That information had to make Rueck feel better about his chances of landing the versatile and talented 6-foot-6 five-star standout.

“Just to be out here and have access to the mountains, the beach, lakes, rivers, whatever you really want, I mean you have so many options it’s just kind of nice and you get a new start and meet new people,” Brown said last week of how excited she is to be in Corvallis and preparing for her freshman season with the Beavers. “It’s a whole different experience.”

While Brown, rated the fifth-best post and 20th overall player in the final 2019 class rankings according to espnW, may have been seeking to place for new adventures, she also needed to feel like she was joining part of an extended family.

Thanks to relationships she built with the coaching staff and the players, Brown felt that Corvallis and the Oregon State program would provide just that.

So far, she couldn’t be much happier as she prepares for the next chapter of her life on and off the basketball court.

"It’s really family-oriented here, which is something I was looking for being so far away, having that second family. I don’t feel like I will be homesick when I have this group of girls and the coaching staff here to make me feel at home.”

Brown, who was named one of the 24 McDonald’s All-Americans, also considered UCLA, Louisville, Oklahoma, Baylor and Oregon, among others.

The chance to develop as more than just a back-to-the-basket player also helped make her decision to play at Oregon State a little easier.

“(Rueck) utilizes post players but also adds to their games,” Brown said. “He’s not happy with you just being at one level, he wants you to grow and to become the best version of yourself on and off the court.

“So having that is awesome for me because I want to be able to do both. I want to play inside, outside, whatever I need to do to help my team out. I just want to be that versatile of a player so it doesn’t matter. Like he says, he wants us to be unguardable no matter what and I think that’s really what we’re striving for.”

Truth be told, however, if Brown had her way she said she would probably play outside for than inside. She developed a 3-point shot as the trailer on the break in high school and loves making an impact that way.

“When you hit a couple of those, people tend to fly out and you can blow by someone, especially players who aren’t as quick or as long or tall,” Brown said, adding that she likes to pass and is more than happy setting teammates up on drives to the basket.

Brown said the McDonald’s All-America game was quite an experience, one that showed her the type of players she will meet up with on some of the top teams in the country.

“To be picked for that game was an honor in itself, just to have someone recognize that you are that caliber of player,” Brown said. “And then getting to know those girls and getting to play against them and just compete was really cool.”

It gave her a little taste of what the Pac-12 Conference season will be like.

“Some of those girls will be people I am playing against for the next four years,” Brown said. “We counted and there were a lot more Pac-12 players than any other conference so that just goes to show the competition level that this conference brings.”

The Pac-12 had seven players on the rosters while the ACC was second with six and the SEC third with five.

That competition is one reason playing at a Pac-12 school was so enticing for Brown. She relishes having to play at her best each time she steps on the floor.

“I think just competing at that high of a level every game — you don’t get a game off,” Brown said. “It’s exciting for me. I like to play in closer games rather than when you’re blowing someone out by 40. ... It might be more stressful on the coaches but for us it’s fun to be in that environment.”

She’s also excited to play in front of the fans inside Gill Coliseum.

“Just watching games and seeing how interactive the crowd is, this fan base here is unlike any fan base I’ve ever seen,” she said. “I’ve been to a lot of games and a lot of schools and this is just a whole different level.”

Until then, Brown said she wants to focus on getting stronger because she knows the leap from high school to college from that aspect is bigger than most.

“I mean you are going to be playing against girls three, four years older than you and the physicality is a lot different,” she said.

While fellow freshman teammate Taylor Jones said her goal is to be the Pac-12 freshman of the year, Brown said she doesn’t have a specific accomplishment on her mind.

She knows this will be a season of developing. Do that and her ultimate goal will be within reach.

“I want to grow as much as I can and become the best player that I can be,” Brown said. “I want to be one of the best to come through this program."

For the better part of two years, Taylor Jones had been looking forward to this moment.

OSU women's basketball: Beavers already thinking about ways to get better for 2019-20 season

ALBANY, N.Y. — There was a sense of sadness as well as frustration inside the Oregon State women’s basketball team’s locker room late Friday n…

If last year’s women’s basketball Civil War inside Gill Coliseum was one for the ages, Monday night certainly gave it a run for the money.

OSU women's basketball: McWilliams thankful for being part of program

ALBANY N.Y. — For Katie McWilliams, the tears were going to flow at some point this season.

During the five years of the four-team College Football Playoff, the Pac-12 has been shut out three times.

Oregon State will open the Pac-12 women's basketball season by hosting Utah and Colorado Jan. 3 and Jan. 5, the conference announced on Wednesday.

Having never been a part of USA Basketball, Aleah Goodman didn’t quite know what to expect when she was invited to take part at the USA Basket…

Former Oregon State star guard Sydney Wiese was in Corvallis last Monday afternoon, taking in practice and getting a look at what will be the …

VENICE, Italy — For the second time in as many games, the Oregon State women's basketball team topped the century mark during their tour of It…

The Oregon State women’s basketball team will open the season at home against UC Irvine as part of the Preseason WNIT tournament on Nov. 9, th…

Nine years ago, Scott Rueck was running one of his first practices after taking over the Oregon State women’s basketball program.

Kat Tudor made her way into the Basketball Center last Wednesday before heading to the locker room to change into her practice gear.

OSU women's basketball: Freshmen getting up to speed for Beavers

Scott Rueck has never been afraid to play a freshman.

Taylor Jones expected to have some first-game jitters Sunday afternoon, but they never materialized as much as she thought they might.

Kennedy Brown knows her freshman season at Oregon State will be one of learning and growing, but her end goal is to be one of the best players to ever put on the uniform for the Beavers.

Kennedy Brown said she enjoys playing on the outside, especially being able to hit 3-pointers in transition. A freshman, Brown will likely get the chance to play inside and outside for the Beavers.