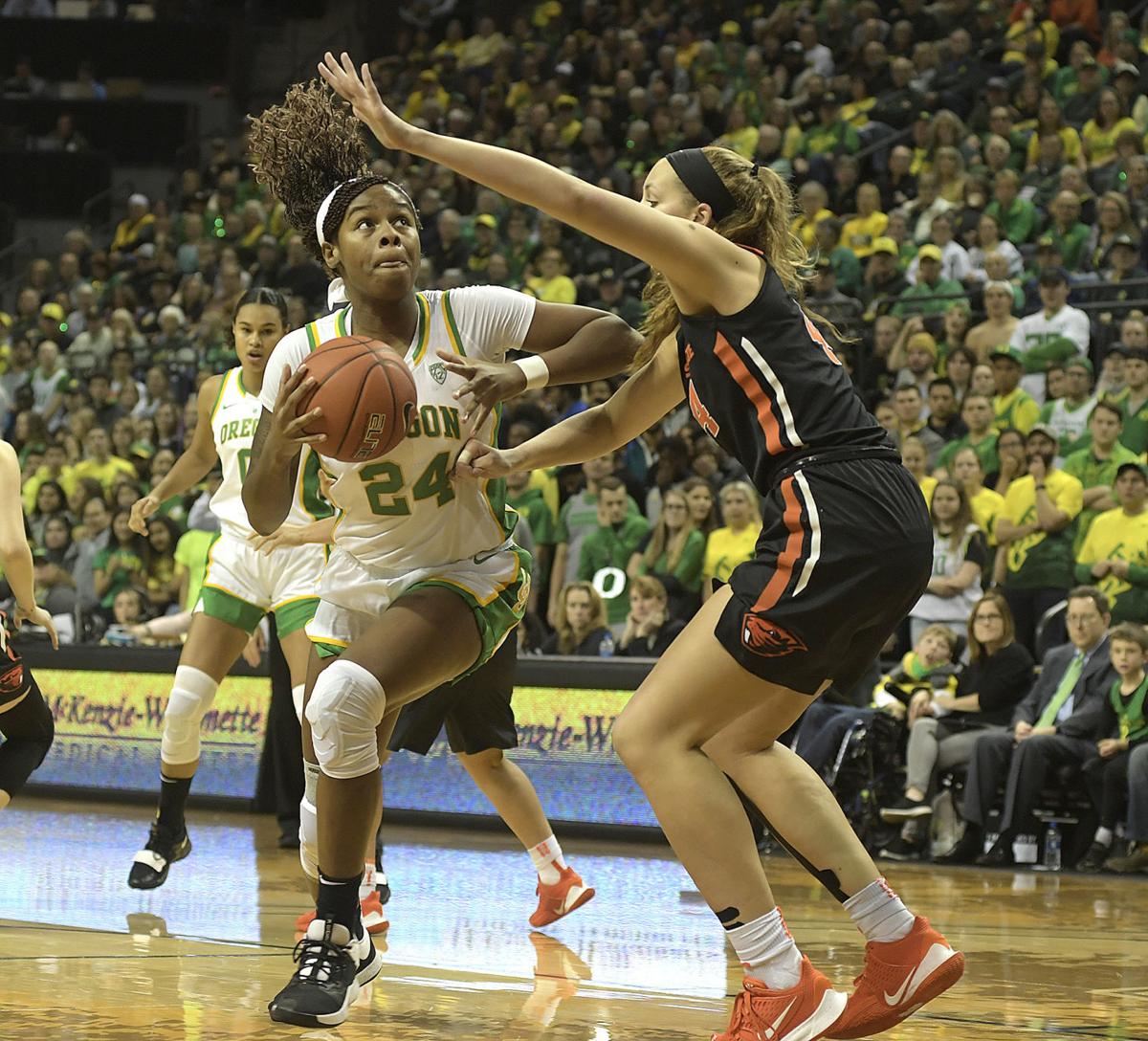 Oregon's Ruthy Hebard, left, tries to drove past the defense of Oregon State's Taylor Jones. Jones has worked to limit her fouls as the season has progressed. 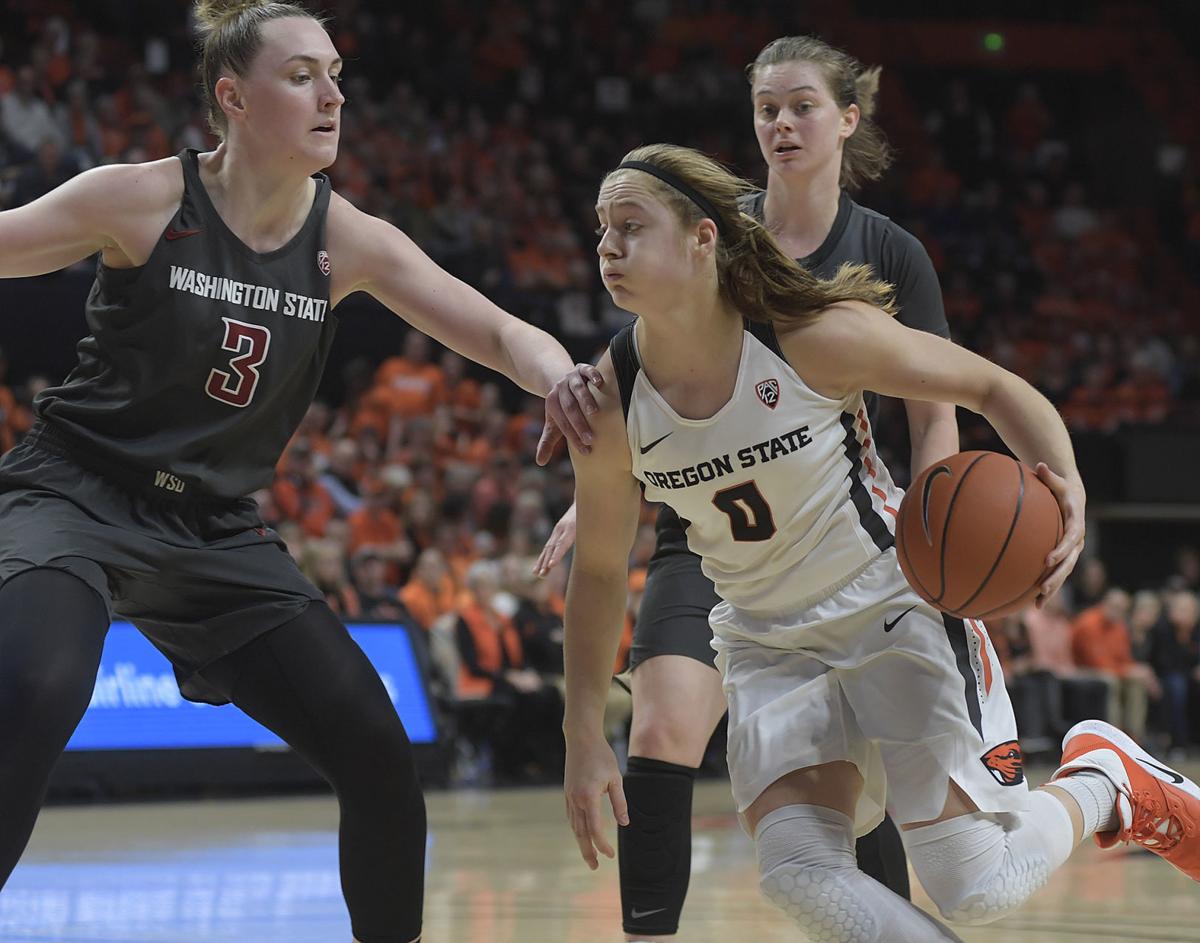 Oregon State's Mikayla Pivec was named to the all-Pac-12 team as well as the all-defensive team.

There have been plenty of learning experiences over the course of the first 30 games of Taylor Jones’ Oregon State women's basketball career.

Jones has started every game and is averaging 12.6 points and 7.5 rebounds per game, and leads the Pac-12 with 58 blocks. On Tuesday she was named to the Pac-12’s all-freshman team and received honorable mention to the all-conference and all-defensive team.

But there were times when Jones wasn’t on the floor, either because of foul trouble or deferring to fellow freshman Kennedy Brown in the post because of her defense.

“A lot of times we would put Kennedy at the five during certain key moments,” coach Scott Rueck said. “I thought her defense was, well it is, it's beyond Taylor's coming in this year. Kennedy was a more-ready defender and so she was playing our biggest minutes at the five defensively.”

Then Brown tore her ACL in early February and suddenly Jones was needed to not only stay out of foul trouble, but elevate her defense in Brown’s absence if the Beavers hoped to make a deep run in the postseason.

It was rough early as USC took advantage in the post, converting on 14 of 22 shots in the paint, according to Rueck, in handing the Beavers their lone setback against an unranked team.

Rueck said Jones wasn’t ready for that challenge at that point, nor was anyone else.

“That's not really a surprise but it does take time. And so we've seen her just kind of learn how to play within the game. The fouls are going away. She's much more disciplined and she's playing great basketball.

“There's really no way to gain that other than through experience, and I've been nothing but impressed by how she's approached it. She hasn't gotten down on herself, she's just said OK and she's been a sponge for knowledge.”

Jones said staying out of foul trouble has been a point of emphasis of late.

“These last few weeks we've definitely been working a lot on post defense and just moving our feet more,” she said. “And I think that's been my problem is just moving my feet and getting to a spot before the other person does, the person I'm guarding. That's been able to help a lot. I mean (Friday’s game) I only had one foul.

“And so I think that's just something that we've been working on in the post because that's been a weakness the majority of this season and that's something we need to hone in for this postseason.”

Senior Mikayla Pivec and junior Destiny Slocum were named to the 15-player all-conference team on Tuesday morning. Pivec was also on the five-player all-defensive team.

Oregon had three players on the all-conference team with Ionescu, Ruthy Hebard and Satou Sabally. UCLA (Michaela Onyenwere and Japreece Dean), Arizona (McDonald and Cate Reese) and Stanford (Kiana Williams and Lexie Hull) all had two players on the team with Oregon State.

Oregon State made the top 16 of the NCAA women’s basketball selection committee’s final reveal on Monday night and would be the No. 4 seed in …

For the third time in the past four seasons, the Oregon State women’s basketball team will open the Pac-12 tournament facing the same team it …

Scott Rueck has been through plenty of Senior Day celebrations over his time coaching basketball.

Oregon State was finding it hard to put away Amber Melgoza and the Washington Huskies on Friday night.

Mikayla Pivec may only be 5 feet, 10 inches tall but that hasn’t stopped her from becoming Oregon State’s all-time career leader in rebounding.

Oregon's Ruthy Hebard, left, tries to drove past the defense of Oregon State's Taylor Jones. Jones has worked to limit her fouls as the season has progressed.

Oregon State's Mikayla Pivec was named to the all-Pac-12 team as well as the all-defensive team.