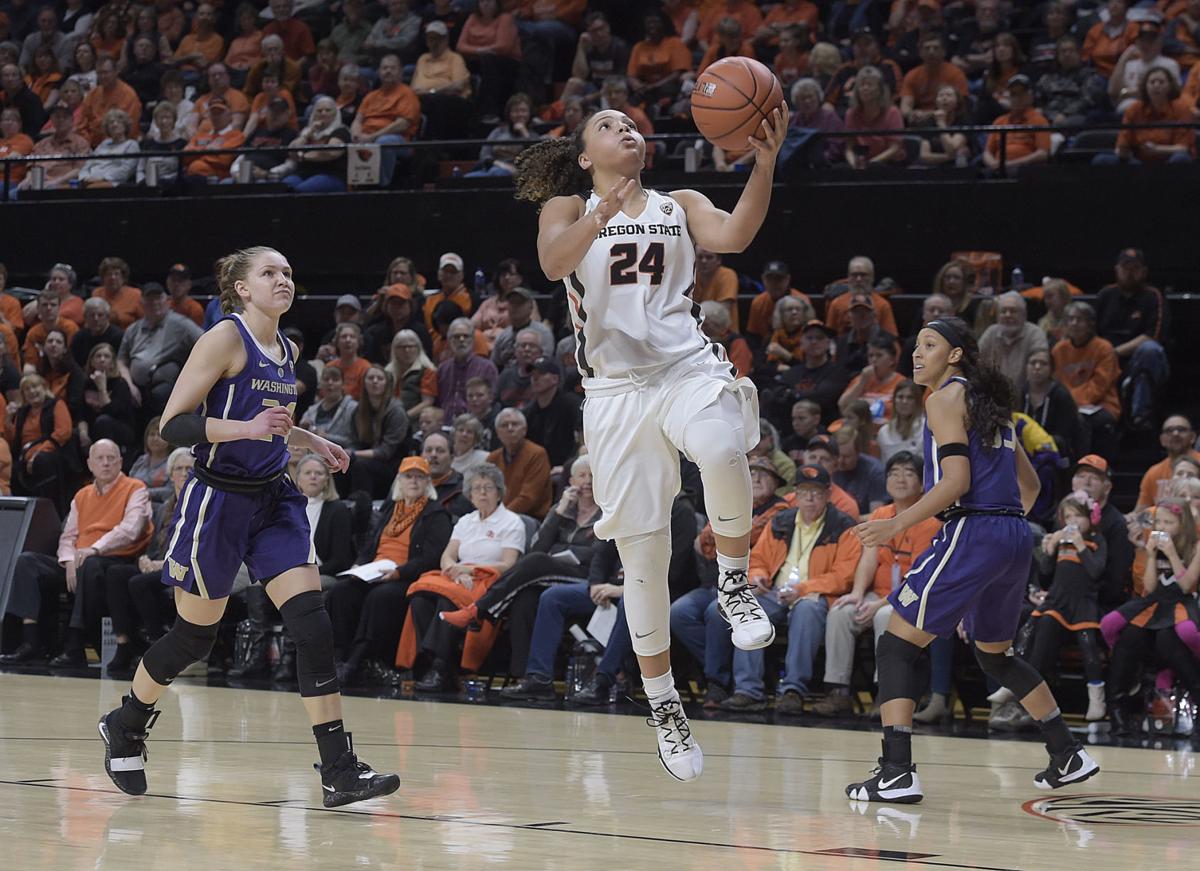 Oregon State point guard Destiny Slocum (24) lays up a ball against the Huskies. The Beavers have been able to attack the basket more this season. 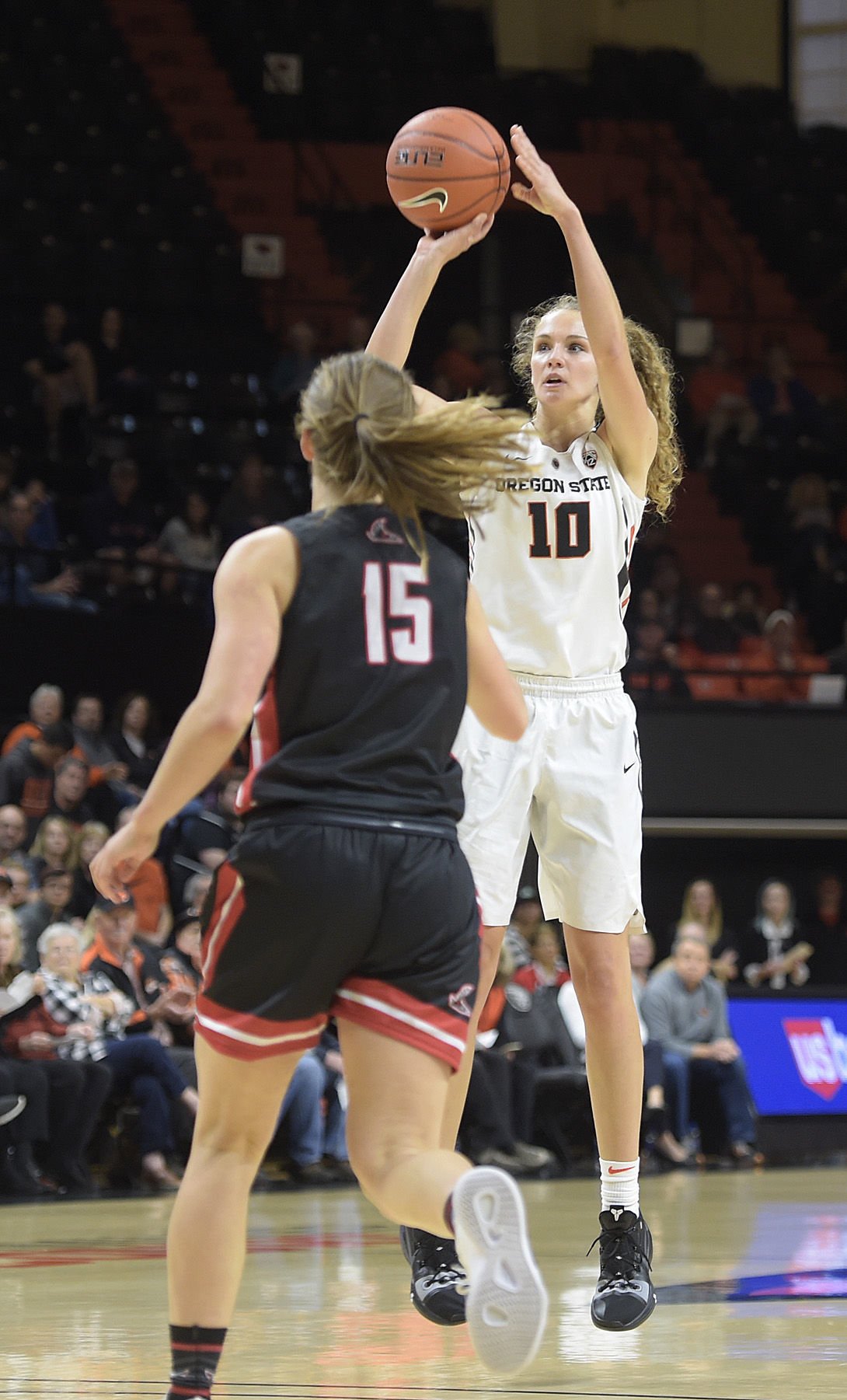 Senior Katie McWilliams has made 20 of 45 3-pointers this season. The Beavers are shooting 43.3 percent from long range this season, tops in Division I.

Even with junior sharpshooter Kat Tudor out for the remainder of season, the Oregon State women’s basketball team can light it up from beyond the 3-point line.

The Beavers led Division I in 3-point percentage through games played Monday, knocking down 165 of 381 attempts for a 43.3 percentage.

Oregon State was tied for sixth with 10.3 made per game and was sixth with the 165 made shots.

While the lone-range shot is obviously a key part of the No. 10 Beavers’ offensive arsenal, they proved this past weekend they don’t have to rely on the shot to be successful.

“I know the 3 is not always going to fall so you have to be ready to have an inside and outside threat,” said junior guard Mikayla Pivec, who leads the team at 57 percent (16 for 28) from beyond the ark.

“So knowing that we can drive effectively, if that’s what the defense is giving us, or being ready to make them pay from the 3-point line, having both is important.”

Twice in conference play, the Beavers have faced a team that focused on containing their 3-point barrage.

Both Washington State and UCLA chose to defend the perimeter and force the Beavers to try to beat them one-on-one and attack the basket.

Oregon State did hit nine 3s against the Cougars but it took 24 attempts for a 37.5 percent effort, well below its season average.

The Beavers attempted just nine 3s against UCLA and made four but still won by 10 on the road.

Coach Scott Rueck said he wasn’t all that surprised the Bruins looked to take away the long-range shots last Friday.

“They chose the 3-point line, which was an effective strategy a year ago,” Rueck said. “They took Kat away down there they just sat on her and buried her and denied her the ball all game long and that impacted us.”

The Beavers have the ability to attack the basket more than in year’s past with Destiny Slocum and Pivec leading the charge from the guard position, instead of relying mostly on the 3 to give the offense a spark.

“This year’s team has more playmakers, we’re at a different level of understanding the game, a different level of confidence,” Rueck said. “We’re just better in those attacking positions, so I just thought we did a really nice job getting to the rim and taking what they gave us, which I think talks to the versatility of our team.”

The Beavers had plenty of versatility on offense as six different players went for double figures in at least one of the two road games this past weekend.

Slocum had 22, Pivec 21, Taya Corosdale 13 and Joanna Grymek 12 in the win against UCLA, while Maddie Washington had a career-high 19 and Aleah Goodman went for 17 in the win over USC. Pivec also had double figures with 21 against the Trojans.

The big games by Grymek and Washington in the post are just what the Beavers could use moving forward. Both had been in a peripheral role offensively, mostly taking handoffs and dumpoffs or scoring on rebound putbacks to get their points.

“Now we’re able to throw the ball inside,” Rueck said. “They’re seeing themselves more accurately as capable. So when you have five scorers that can beat you at the rim, mid-range and 3, that’s a hard team to beat.”

Sure, Oregon State had already exacted a measure of revenge against UCLA and USC last season at home after its lost weekend on the road — UCLA won by 25 and the Trojans rallied from 18 down to pick up a win that dropped the Beavers to 2-2 in conference play — early in the conference season.

But that road trip still seemed fresh on the players' minds last week, with several players admitting revenge was a motivating factor.

Pivec recalled Tuesday that the Beavers had to run 27 down and backs a season ago soon after they returned home from that trip to remind them of the 27 turnovers they committed against the Trojans .

“So it was easy to remember how poor that weekend went so we wanted to improve on that and get back at those guys.” Pivec said.

Tudor was on the bench cheering on her teammates in Los Angeles as she waits to have surgery, likely toward the end of next week, for her torn ACL.

While she obviously won’t be back this season, she has tried to remain engaged and has become a vocal supporter on the bench.

The Beavers are 9-3 against the Wildcats under Rueck, including nine straight wins with all but two coming by double digits. Last year Oregon State won by 40 and 25.

Don’t expect that lopsided of a battle on Friday night.

“I feel like it’s a completely different team from a year ago,” Washington said. “So just seeing their success, I’m excited to play against them. It’s going to be a challenge and a great game.”

The Wildcats are led by Washington transfer Aari McDonald, who through Monday was third in the country in scoring at 25.6 points per game.

“Lightning fast, maybe the quickest, fastest player in the conference,” Rueck said of McDonald, who sat out last season after transferring. “And now they’ve got belief, they’ve got confidence, they’ve got a new hope and they’ve got talent.”

OSU women's basketball: Beavers pull away from Wildcats in the fourth

While it may have appeared the Oregon State women’s basketball team was in control with an 11-point lead heading into the fourth quarter, Dest…

When Kat Tudor grabbed a rebound in the second quarter against Washington State on Jan. 4, she felt what no athlete ever wants to feel.

LOS ANGELES — Mikayla Pivec had to watch the last nine minutes of the first half on the bench after picking up her second foul.

Scott Rueck has been part of 192 wins in his eight-plus seasons as Oregon State’s women’s basketball coach.

LOS ANGELES — Pauley Pavilion has been a house of horrors for the Oregon State women’s basketball program over the years.

OSU women's basketball: Tudor out for the season with knee injury

Oregon State point guard Destiny Slocum (24) lays up a ball against the Huskies. The Beavers have been able to attack the basket more this season.

Senior Katie McWilliams has made 20 of 45 3-pointers this season. The Beavers are shooting 43.3 percent from long range this season, tops in Division I.