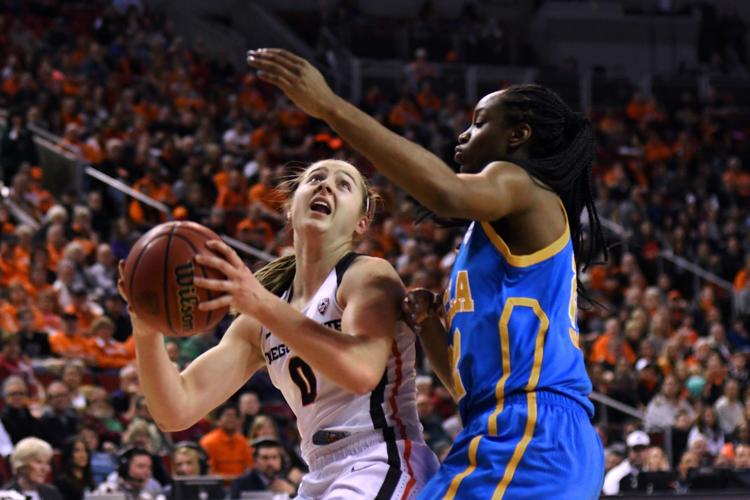 Oregon State freshman guard Mikayla Pivec takes the ball to the basket against UCLA in the semifinals of the Pac-12 tournament last week. Pivec has brought an aggressive attitude, especially late in the season. 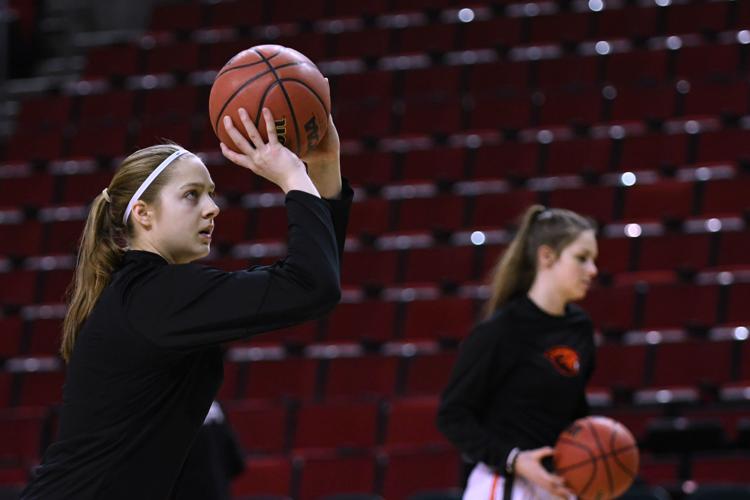 Mikayla Pivec, left, was a key factor for Oregon State in the Pac-12 tournament.

It’s not uncommon for college freshmen to occasionally hit a wall at some point during their first season.

Mental and physical exhaustion can creep in as players have to deal with course loads, intense practices as well as lots of travel in comparison to what they faced in high school.

Sometimes that means productivity on the court may fall off just a bit.

Sydney Wiese remembers that happening to her during her freshman year.

So before Oregon State’s women’s basketball game at Arizona just past the halfway point of the conference season, Wiese pulled aside freshman Mikayla Pivec for a quick conversation.

Wiese told Pivec, who has started since the ninth game of the season, to play loose, have fun and be aggressive.

“I don’t think she was necessarily playing poorly, but it’s tough to keep up that level of productivity, especially as a freshman,” Wiese said. “I think throughout the season she has proved consistently how hard she works and how good she is.

“Her numbers may have gone down a little bit in the middle of conference play but she showed this (past) weekend how valuable she is and how good she is.”

While Pivec has been a key contributor throughout the season, her performance at the Pac-12 tournament showed the potential she has to have a standout career with the Beavers.

Against Stanford, Pivec started fast with six points in the first quarter to help the Beavers jump out to a big early lead in the title game.

But after sitting all of the second quarter with two fouls, Pivec finished with eight points and two rebounds in the loss to the Cardinal.

“She was showing all of the aspects and components of what she can do offensively,” Wiese said of Pivec's play in the tournament.

Heading into the week’s NCAA tournament — the brackets will be announced beginning at 4 p.m. Monday — Pivec is averaging 7.4 points per game and 4.8 rebounds.

She has started the last 24 games and has adapted to her role.

“Coming in you don’t really know what to expect but you just try to work on as many things for your skill set as possible to try to help your team be successful,” Pivec said. “I think for me just evolving and trying to be more aggressive offensively and find a role where I can help on the offensive end as well as the defensive end.”

Her attention to detail has not gone unnoticed by teammates.

“Mik learns so fast,” junior center Marie Gulich said. “She’s not just a talent, she’s a fast learner and soaks everything in. Even when (the coaches) talk to the post players she looks and listens and she learns all positions.

“I like how she puts it all together. It’s hard as a freshman sometimes to put it all together and she’s able to. It’s obviously amazing and you can see what she’s doing on the court for us.”

Gulich is especially happy with the effort Pivec puts forth on the glass.

“She doesn’t fear contact or anything and that’s super important as a rebounder,” Gulich said. “She’s super athletic, she can hold people off, she can jump.

“It’s good for us posts because we know if we can hold somebody off because we have (Cal’s Kristine) Anigwe against us or (UCLA’s Monique Billings), then it’s always good to know there’s somebody crashing like crazy to get the ball if you’re holding someone off. We appreciate that.”

For the Beavers to make a deep run in the NCAA tournament, they know they will need the same aggressiveness that Pivec has delivered all season, and specifically in the Pac-12 tournament.

The last time Oregon State and Long Beach State faced off in women's basketball was in Scott Rueck’s first game as the Beavers’ coach.

Who can afford to buy the Phoenix Suns?

Oregon State freshman guard Mikayla Pivec takes the ball to the basket against UCLA in the semifinals of the Pac-12 tournament last week. Pivec has brought an aggressive attitude, especially late in the season.

Mikayla Pivec, left, was a key factor for Oregon State in the Pac-12 tournament.