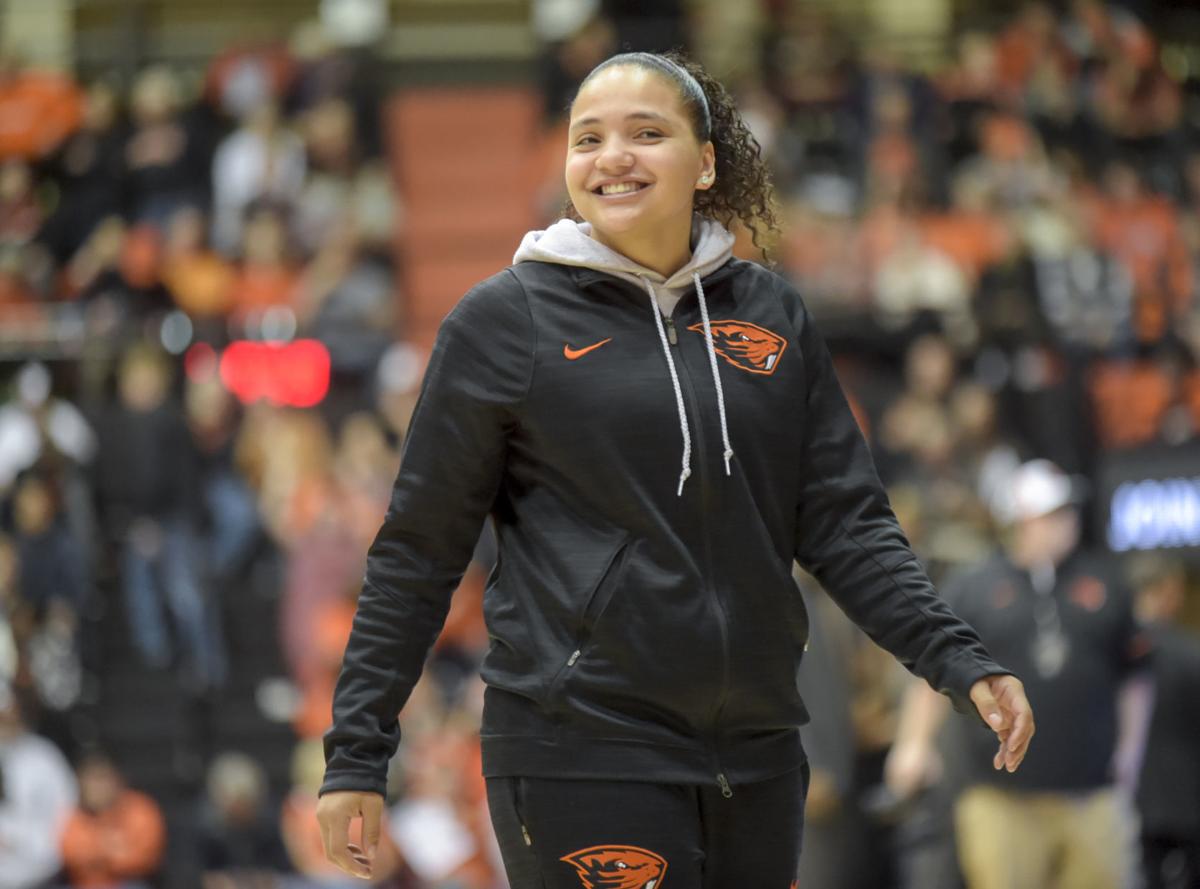 After being forced to sit out last season after transferring from Maryland, Oregon State's Destiny Slocum is ready to make an impact on the court for the Beavers this season. 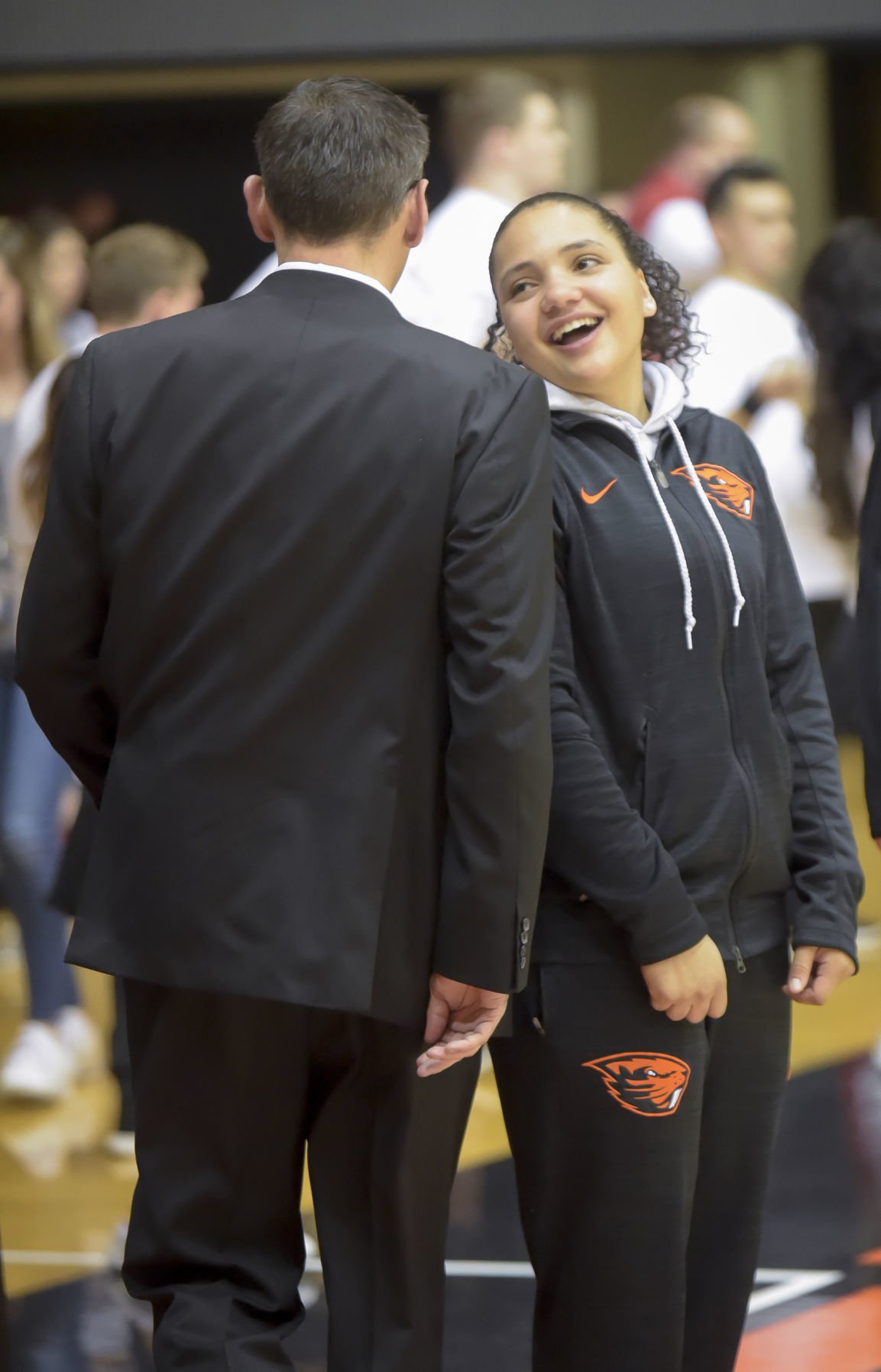 Destiny Slocum, right, spent last year focusing on how she can be a better teammate.

Sitting in the film room last week, Destiny Slocum was soaking in everything that coach Scott Rueck was talking about as the Oregon State women’s basketball team prepared to take the court for its first official practice of the upcoming season.

It certainly wasn’t the first time Slocum had been in the room, nor will it be her last, but that Monday was special.

“I remember sitting there last year and being like, 'man, I want to be as hyped as everyone else for the season,'” Slocum recalled.

There was no realistic way that could be the case.

Slocum, who transferred from Maryland after her freshman season, had to sit out last year.

It was a tough process, no doubt, but one that she knows was needed.

But on that Monday, the realization hit — her long wait to finally feel 100 percent part of the program finally had ended.

And she couldn’t be more “hyped” to prepare to make as big of an impact as she can for the Beavers this season.

She’s not the only one.

“I’m so excited to have her,” said junior guard Mikayla Pivec, who was Slocum’s roommate last season. “She’s a great playmaker, great teammate. I know last year was tough for her but you never saw it by her body language. She was always the first one to pick you up or say 'good job' or be an enthusiastic teammate even though I know it probably wasn’t as fun as it could have been for her.”

There’s no doubt last year was trying at times, although Slocum was pleasantly surprised it turned out to be easier than she anticipated.

Slocum was allowed to practice with the team and attend home games, but was not able to travel with the team — including the NCAA tournament, where the Beavers advanced to the Elite Eight for the second time in three seasons.

Pivec said it was tough on Slocum early. At the team retreat last year, each player was asked to talk about the way they could impact the team. Pivec said when it came time for Slocum, Pivec said Slocum didn’t feel that she could help much because she wasn’t going to be on the court.

Pivec recalled Rueck telling Slocum she could have as big of a role as anybody with her positive attitude and how she could lend support to her teammates.

"I think she took that to heart," Pivec said. "Throughout the year you could see her cheering super-loud, jumping so high off the bench."

With Rueck's advice, Slocum said she looked at this way: Games only last for two hours and she got to take part in pretty much every other aspect.

She embraced mimicking some of the best guards in the conference to prepare the team, and began to find her voice while also becoming the biggest cheerleader.

Rueck was impressed with the way Slocum embraced her new role a season ago.

“I think she might have even surprised herself at well she adapted and how much she actually enjoyed that role once she accepted it,” he said. “And I think she found her niche on the team and felt like a valuable member of the team.”

Easing the process, Slocum said, was the way her teammates and coaches embraced her and immediately made her feel as much a part of the team as anyone.

She used the time to see the game from a different perspective, one that will more than likely make her an even better player and teammate.

Slocum turned her focus from herself to the team. It was eye-opening, she said, and something she plans to continue.

“That feeling last year is what got me through the entire year. So now that’s all I want to think about. When we step on the court, it’s what can I do to make Mik better and what can I say to Aleah (Goodman) to make her better. And how can our team be the best."

It’s not that Slocum was a selfish player, it’s just that now she is more committed to that outward focus.

“I want to get better but I know for me to get better I have to make other people better so then I can improve myself,” she said.

"It’s obviously the biggest thing we focus on, is defense here at Oregon State," McWilliams said. "She’s gotten so much better at defense it’s really cool to see that growth there."

Rueck describes Slocum, who was named the WBCA's national freshman of the year while at Maryland, as a dynamic player.

"She is one of those players who can do so many things on the court and has just a great energy and a bounce to the floor that only she can bring," he said. "She makes people around her better and is tough to defend. It's fun for the coaches to scheme and come up with parts of a system that fit her well."

With the long wait coming to a close, Slocum couldn’t be any happier to be a part of the program and the university.

Slocum hasn’t played in front of a crowd — unless you count those in Dixon Recreation Center on campus — since Maryland lost to Oregon in the Sweet 16 of the 2017 NCAA tournament.

Just going through warmups will be special — her first chance will be Nov. 3 in an exhibition against Northwest Nazarene. The regular season opener is Nov. 9 against Cal Poly.

Slocum said her heart started pounding a little extra when she took in a home volleyball game a couple of weeks back.

“Everything is so real now and I missed that,” Slocum said. “I missed being there and preparing. It’s going to be amazing.”

She expects to be a little emotional when that day comes.

If that happens, how could you blame her?

OSU women's basketball: Corosdale, Tudor back on the court

Oregon State received its highest preseason ranking when the Beavers came in at No. 8 in The Associated Press' top 25 women's basketball poll …

Scott Rueck has a bit of a problem, only it's one he’s more than happy to deal with this season.

OSU women's basketball: Beavers off to fast start in practice

Destiny Slocum has taken some fun vacations to places such as Italy and Russia, but admits that toward the end, she was ready to return home.

OSU women's basketball: Simmons gets chance to play in states

Growing up in Australia, playing college basketball in the United States wasn’t something Jasmine Simmons thought much about.

Andrea Aquino did a little research when Oregon State became interested in recruiting her.

It could turn out to be quite a busy summer of basketball for Oregon State’s Mikayla Pivec and Destiny Slocum.

After being forced to sit out last season after transferring from Maryland, Oregon State's Destiny Slocum is ready to make an impact on the court for the Beavers this season.

Destiny Slocum, right, spent last year focusing on how she can be a better teammate.