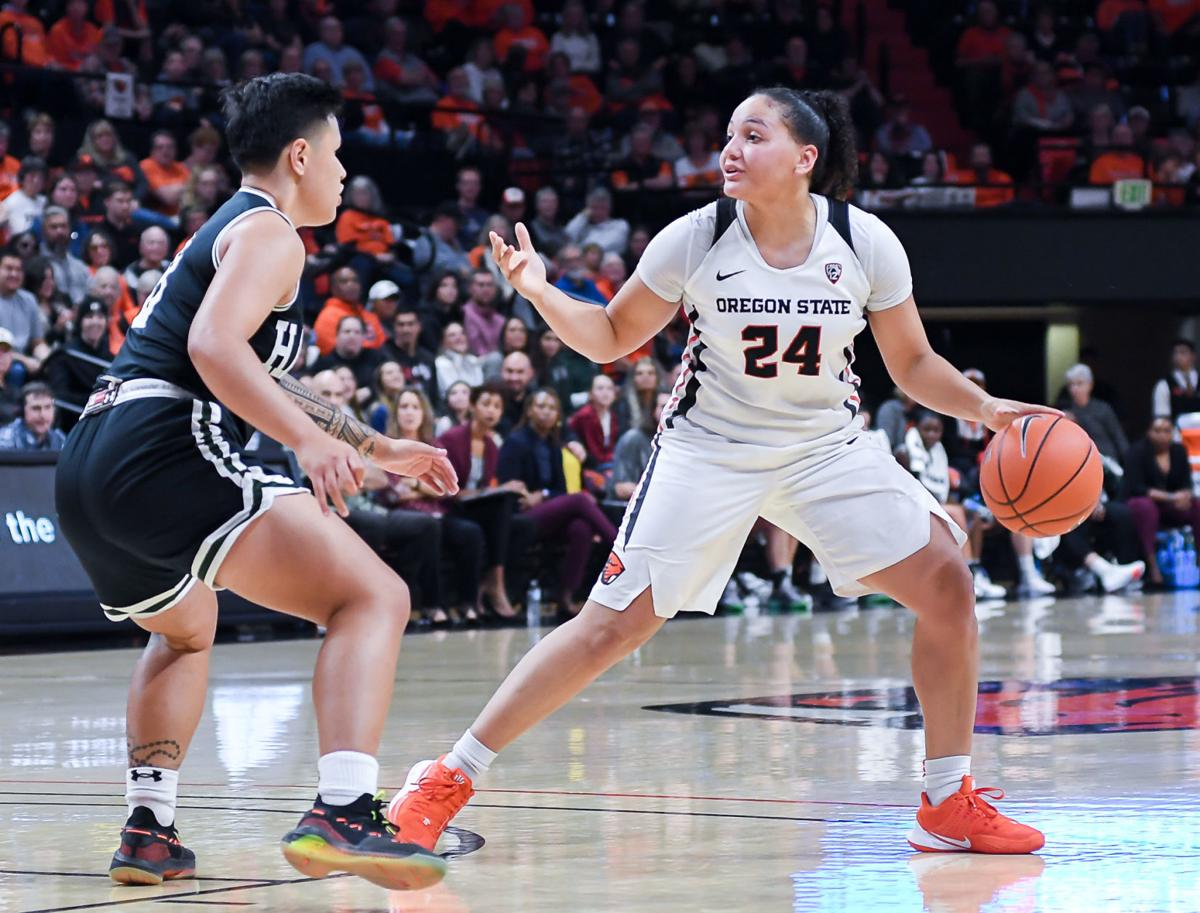 Destiny Slocum, right, is one of four Oregon State players averaging double figures (14.3 points per game) this season, one of the reasons the Beavers are 8-0 and ranked No. 4 in the AP poll. 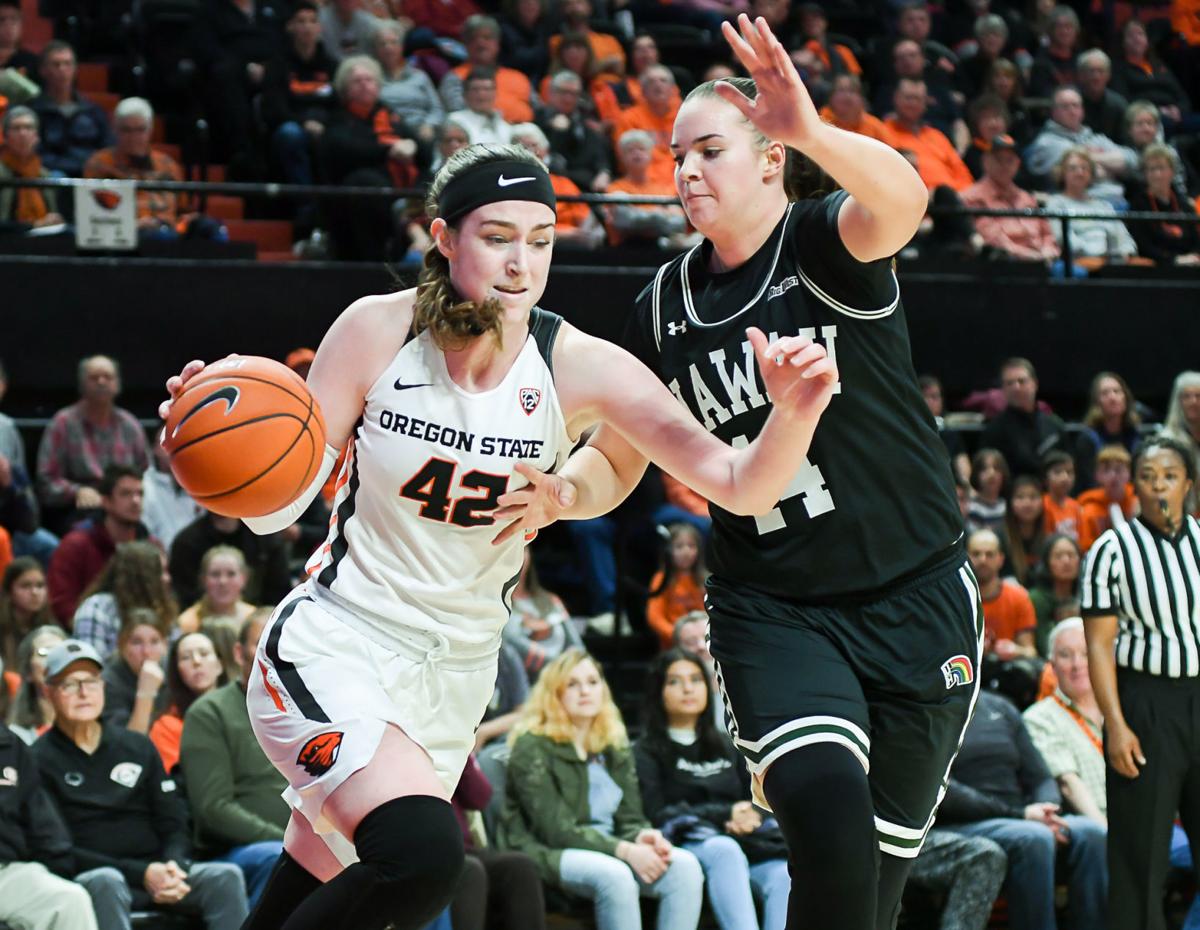 Kennedy Brown is coming off a big game against Hawaii, where she scored 16 points and hit four of her six 3-point attempts.

For the second week in a row, there was at least one top-5 upset in women’s college basketball.

A week after elevating to No. 2 in The Associated Press poll with an upset of then-No. 1 Oregon, Louisville fell to seventh after an upset loss to Ohio State.

That allowed the Beavers, who took care of business at home in their one game — a 64-32 thrashing of Hawaii — to move up to No. 4 in this week’s poll. It’s the best ranking ever in the AP poll. They finished second in the coaches poll following the 2015-16 season.

UConn (8-0), which thrashed Notre Dame on Sunday, moved from fourth to second.

Stanford had 27 of the 30 first-place votes with UConn, Oregon and Oregon State each receiving one.

South Carolina is No. 5 followed by Baylor, Louisville, Florida State and N.C. State.

UCLA makes it four Pac-12 teams in the top 10 as the Bruins are No. 10 while Arizona is the fifth conference team to be ranked at No. 18.

The Wildcats (9-0) are off to its best start in 20 years and have won a school-record 15 straight games dating to their WNIT championship run last season. A win Thursday over Tennessee State would give the Wildcats their best record ever to start a season. Arizona's ranking matches its best since 2003.

No. 15 Mississippi State fell out of the top 10 for the first time since the final poll of 2016 after losing to West Virginia.

“I can't remember an early season in women's basketball that was anything like this," ESPN analyst and former UConn star Rebecca Lobo said. “This is what many women's college basketball fans have been hoping for — more really good teams and No. 1s that are touchable. I'm eager to see what's next."

Oregon State remained the No;. 1 overall seed in Charlie Creme's bracketology projections this week. He has the Beavers ion the Portland Regional with Stanford (Dallas), Oregon (Fort Wayne, Indiana) and UConn (Greenville, South Carolina) as the other No. 1 seeds.

The Beavers are also No. 1 in the first NCAA RPI that was released on Monday. Missouri State is second with UConn, Stanford and Princeton making up the top 5.

While Louisville and Mississippi State both dropped five spots, Tennessee had the biggest fall, going from 17 to 23 after suffering its first loss.

Maryland dropped four spots from nine to 13 after a loss to N.C. State.

The Big Ten beat the ACC for the first-time ever in the conferences annual challenge. The Big Ten won all seven of its home games and added road wins by No. 12 Indiana and Minnesota. The Hoosiers continue to impress this season, having achieved their highest ranking ever this week.

Last week was a chaotic one throughout the women’s college basketball landscape. Oregon, Baylor and a handful of other top teams suffered defe…

OSU women's basketball: Beavers' aggressive approach has them ranked No. 5

Through the first seven games of the season, the Oregon State women’s basketball team has displayed a more aggressive approach to each game as…

Oregon State women's basketball player Mikayla Pivec has been named the Institute for Sport and Social Justice’s Playmaker of the Month, the I…

After playing seven games in a three-week span to open the season, the No. 4-ranked Oregon State women’s basketball team has had a nice little break.

Destiny Slocum, right, is one of four Oregon State players averaging double figures (14.3 points per game) this season, one of the reasons the Beavers are 8-0 and ranked No. 4 in the AP poll.

Kennedy Brown is coming off a big game against Hawaii, where she scored 16 points and hit four of her six 3-point attempts.