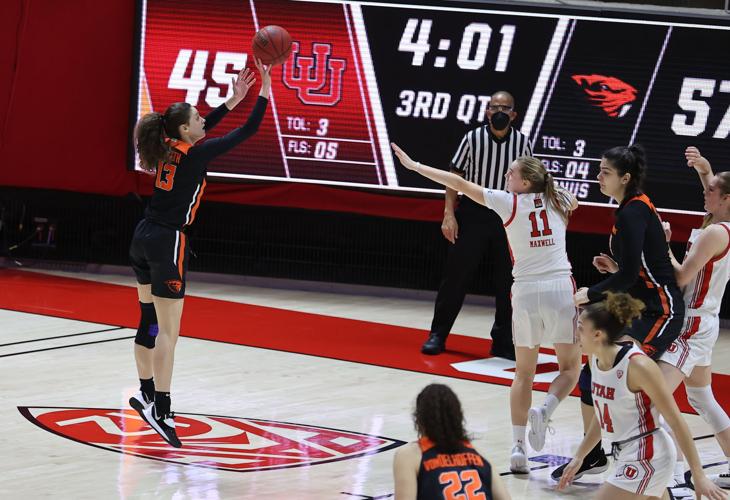 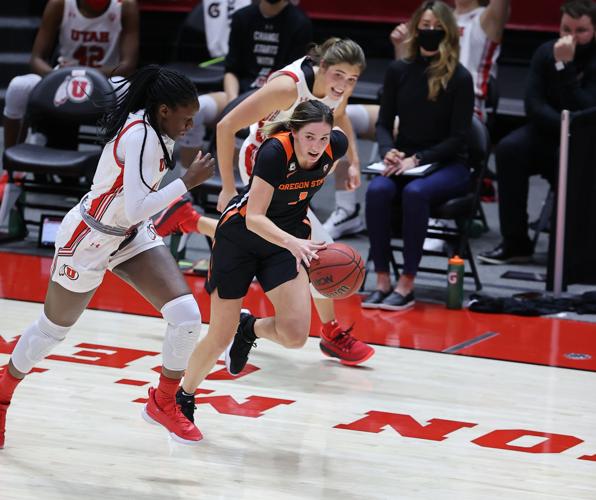 Aleah Goodman scored a team-high 21 points and dished out five assists on Sunday. 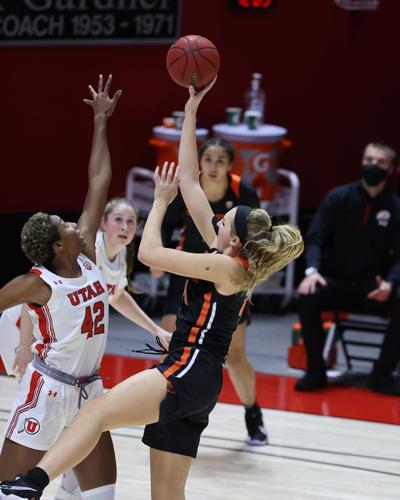 Oregon State's Taylor Jones scored 15 points and grabbed six rebounds in only 13 minutes as she dealt with foul trouble on Sunday.

Oregon State was clinging to a six-point lead in the closing minutes of its fourth game in eight days Sunday afternoon.

Coach Scott Rueck called a timeout as the Beavers were close to getting called for a 10-second count in the backcourt.

All Rueck was hoping for on the ensuing inbounds play was to get the ball over half court and avoid a violation.

Instead, Sasha Goforth was able to break free, Talia von Oelhoffen delivered a perfect pass and Goforth went in for the basket that helped keep Utah and bay.

The Beavers then made enough free throws down the stretch to come away with an 84-74 Pac-12 women's basketball win over the Utes before a smattering of fans at the Huntsman Center in Salt Lake City.

“It was definitely a little bit of a turning point, you know because like you said there came a point where it was a two-point game so we just had to keep putting it on them and not letting up and I think that kind of emphasized that,” Goforth said of the inbounds play.

Goforth lined up on the half court line with Taylor Jones in front of her. She jabbed her defender and went around a screen by Jones and von Oelhoffen hit her in stride.

“I didn't exactly know how they would play us in that scenario to know what would be available, but Talia has a knack for putting the ball in the right place at the right time and Sasha, she's such a jet, so fast,” Rueck said. “She got separation, made a great catch, it was up over the top like a fly pattern basically, caught it and finished. And that was big.”

For Oregon State, Aleah Goodman finished with a team-high 21 points for the second straight game while Goforth added 16 points and 10 rebounds for her first career double-double on her birthday. Jones scored 15 despite playing just 13 minutes as she battled foul trouble and von Oelhoffen chipped in 12 for her third double-digit performance in as many games.

Oregon State (6-5, 4-5) appeared on its way to a blowout win after scoring the first 10 points of the third quarter to go up 19. But the Utes continually clawed away in the fourth quarter.

But von Oelhoffen buried a 3 and Jones hit a free throws to restores some order and put the Beavers up 73-67 with 2:21 to play. It appeared that Maxwell had cut the deficit back to two with a 3-pointer following von Oelhoffen's 3, but the Utes were whistled for a moving screen.

Then came Goforth’s drive after the timeout that seemed to be the back breaker as the Beavers hit enough free throws down the stretch to pull out the win.

“It means a lot because I think earlier in the year in those situations we kind of let up, but I think that we've grown so much just in a few games,” Goforth said. “So it meant a lot that we could really pull through and get the W.”

The Beavers closed the first half on a 10-0 run as Taya Corosdale and Ellie Mack drained 3-pointers and Goodman scored a layup and hit two free throws after Utah coach Lynne Roberts was whistled for a technical foul.

That stretch between the second and third quarters was a thing of beauty.

“I can’t really describe it, it’s just so energetic and enthusiastic and you're just so happy for your teammates and you feel like you're on top of the world,” Goforth said.

Rueck didn’t realize just how big of a run that was over the span of 5 minutes and 36 seconds of game action.

“I knew it was tied and then it was just like that nine or whatever it was at halftime, I remember that and obviously key stretch,” Rueck said.

The Utes had taken their first lead of the game, 31-28, in the quarter thanks to an 8-0 run on a Maxwell 3-pointer. The game see-sawed the next couple possessions before Corosdale started the closing run with a 3 with 1:42 left in the half.

Goodman had a game-high 14 points while Martin led the Utes with 11.

The Beavers have now won three straight and finished a daunting four games in eight days with three wins and a double-overtime loss.

Monday will be a day to rest before getting back to work on Tuesday for Arizona and Arizona State at home this coming weekend. The Wildcats, who did not play this week due to COVID-19 protocols, are scheduled to play at OSU on Friday.

“I mean we talked about we want to go for 4-0 during this stretch, we want to get ourselves back in every conversation, every race, everything we possibly can,” Rueck said. “Unfortunately came up short in the first one against Washington State but it was a double-overtime game. .... But to finish the way we have and to finish it 3-1, clearly gaining momentum, gaining confidence — just what you'd hope this time of the year.

“Our best basketball obviously is still ahead of us. … I'm just super proud of everybody associated with our program for the way they embraced a tough week and finished strong and got better throughout. So exactly what we needed. Excited to get back at it after a long nap.”

OSU women's basketball: Beavers rounding into form after rough first half of season

Coaches can run whatever drills they want and players can think they know exactly what to do in practice.

Just imagine what Talia von Oelhoffen could be capable of doing once she gets up to full speed with the Oregon State women’s basketball program.

The snow was falling in and around Corvallis Tuesday afternoon, making getting around town miserable for anyone on the roads.

Heading into the 2020-21 women’s college basketball season, most players and coaches expected to be faced with some ups and downs in regard to…

OSU women's basketball: Cardinal dominate the final 15 minutes to run away from Beavers

For the better part of 25 minutes, the Oregon State women’s basketball team went toe-to-toe with the No. 5 team in the country.

In the latest bracketology projections by ESPN’s Charlie Crème, the Oregon State women’s basketball team is in the “next four out” category fo…

Early last week a social media post stated there are more than 1,200 women’s basketball players across the three NCAA divisions who have put t…

Aleah Goodman scored a team-high 21 points and dished out five assists on Sunday.

Oregon State's Taylor Jones scored 15 points and grabbed six rebounds in only 13 minutes as she dealt with foul trouble on Sunday.