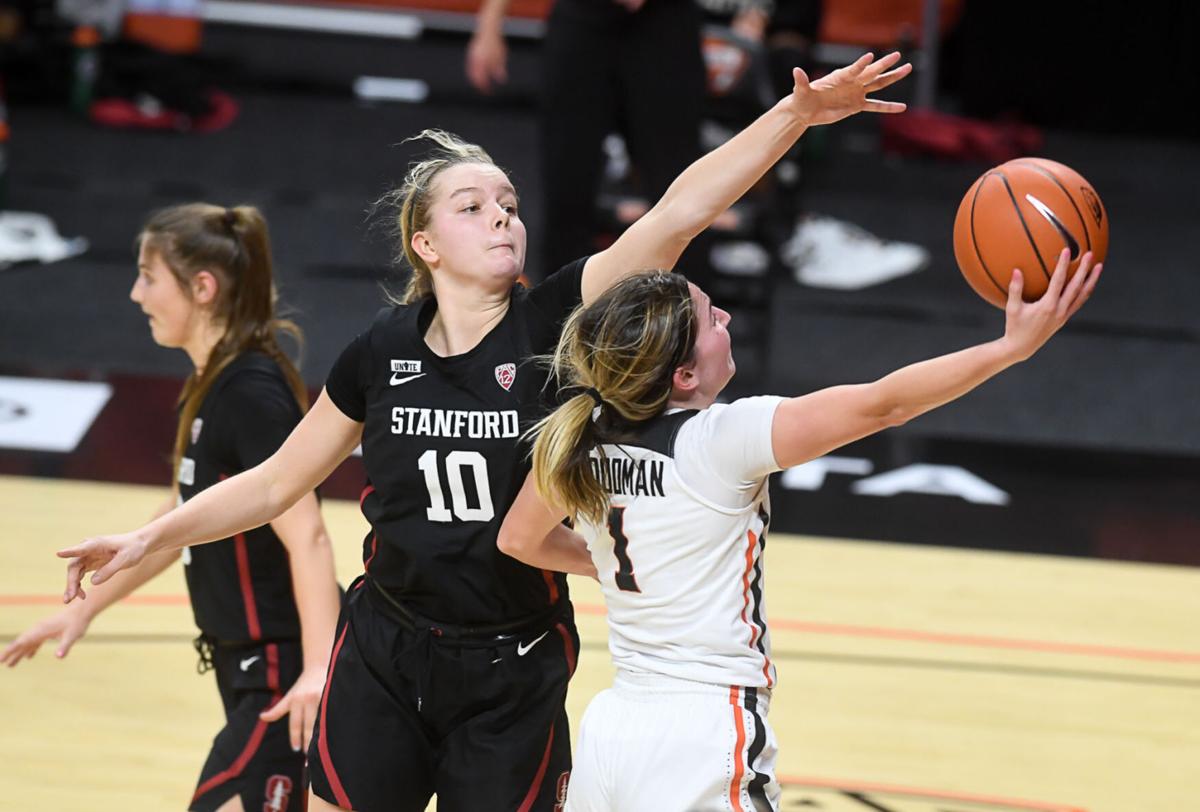 Oregon State senior guard Aleah Goodman drives to the basket against Stanford. The Beavers have won five of six, with the lone loss coming to then-No. 5 Stanford in a game the Beavers trailed 49-48 midway through the third quarter before the Cardinal pulled away. 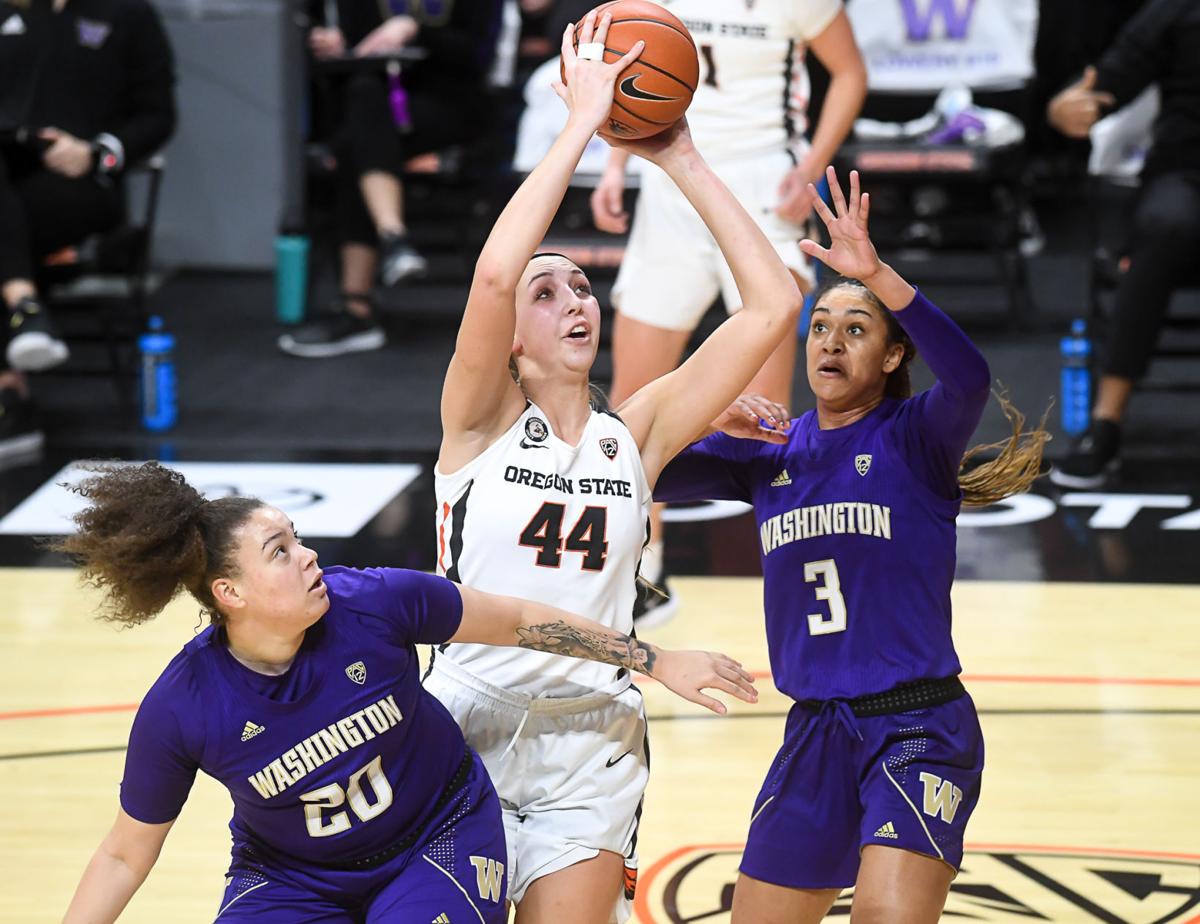 Oregon State sophomore Taylor Jones leads the Pac-12 in rebounding at 8.6 per game and is second in field goal percentage at 58.6%.

When Oregon State dropped a 77-75 overtime decision to Washington State on Jan. 24, it was the Beavers' fifth straight loss and they had not won a game since defeating Colorado on Dec. 6.

The Beavers had been on pause for 29 days since losing to the Cougars the first time on Dec. 19 in a game that saw Oregon State surrender the last eight points in a 61-55 setback.

After the January loss to the Cougars, the Beavers were just 3-5 overall and 1-5 in Pac-12 play.

The chances of being in the NCAA women’s basketball tournament for a seventh straight season seemed dire at best.

But since that Jan. 24 loss, the Beavers (8-6, 6-6) have won five of six and have moved from the bottom third of the conference standings into a tie for fifth with Colorado (10-8, 8-8). OSU swept the season series with the Buffaloes.

The lone loss in the recent stretch came at home to then-No. 5 Stanford in a game the Beavers trailed 49-48 with about 15 minutes left before they ran out of gas after having had just two practices in two weeks after a second shutdown due to COVID-19 protocols.

But the Beavers rebounded about as well as possible — in games and in general — from that loss with a road sweep of the Los Angeles schools, including Sunday’s 71-64 upset of then-No. 8 UCLA that, according to ESPN bracketologist Charlie Crème, has the Beavers going from next four out (third in that group) to in the tournament at this point.

Oregon State also moved up to No. 34 in the NET rankings, which the NCAA selection committee uses to help determine the field of 64, following Sunday's action.

It’s been quite the journey for the Beavers to get to this point and the chance to earn their way into the field.

"Everybody in this program, I mean we're used to the tournament and not that we take it for granted but it's absolutely the expectation when you start the year,” coach Scott Rueck said Sunday. “We knew with a lot of new faces, a lot of talent, that we had a chance to get there. The way the season’s played out, obviously that has been in doubt. I mean we lost a couple tough ones in December that man you wish you could have them back. You know the pauses certainly have slowed our progress.”

With that rough start, the Beavers set a goal to be the best team they could be by the end of the regular season. And that appears to be the case after holding the Bruins to a season-low 27.6% (21 for 76) shooting performance and outrebounding the Bruins 45-39.

Not only have the Beavers begun to make a strong case for inclusion in the tournament, they are being rewarded for staying the course through so many ups and downs this season.

“It just has finally given us some confidence that we've had,” senior Aleah Goodman said. “… Just playing these two last games and just really kind of gaining our confidence and knowing it's not fake confidence, it's real confidence and we have the ability to be confident in who we are and the program that we're in is special.

“Putting these two games together were really important for what we want to do in the future and then I think it just gives us more determination to go into Eugene and then go into the Pac-12 tournament.”

The Beavers head to rival Oregon on Sunday and a win against the No. 14 Ducks would be one more piece to a resume that is getting better and better as the season comes to a close. Then it's off to the Pac-12 tournament where a couple wins would all but lockup a spot.

“I'm so proud of this team and just seeing their hard work pay off and just kind of what we've been preaching," Goodman said. "The payoff is really special.”

Goodman, who had 20 points, nine assists and seven rebounds in the win over UCLA on Sunday, was named the national player of the week by ESPNW on Monday.

It's the second time she has been honored as the player of the week by ESPNW. The previous honor came on Feb. 25, 2019.

She was later named the Pac-12's player of the week.

Sophomore post Taylor Jones leads the conference with 8.6 rebounds a game, is second with 58.6% shooting from the floor and is third with 1.7 blocks per game.

Oregon State is fourth in scoring at 73.3, just behind UCLA and Oregon at 73.4. Stanford entered Monday leading the conference at 79.0.

Stanford moved up to two spots to No. 4 in the AP poll ahead of Monday's showdown with No. 9 Arizona. The Wildcats were up one spot from last week.

UCLA dropped two spots to No. 10 and Oregon fell one spot to No. 14 after being blown out by UCLA.

Oregon State did not receive any votes after its upset win over UCLA.

OSU women's basketball: Beavers pull away down the stretch to upset No. 8 UCLA

Talia von Oelhoffen hit a go-ahead 3-pointer and Oregon State executed down the stretch to pull off a 71-64 upset over No. 8 UCLA on Sunday.

Locking in defensively for 40 minutes will be needed if Oregon State hopes to make a postseason run.

If the Oregon State women’s basketball team wants to make a case for an at-large berth into the NCAA tournament, the Beavers only have a few o…

Oregon State is getting plenty of contributions from its underclassmen, making for a potentially bright future for the Beavers.

In the latest bracketology projections by ESPN’s Charlie Crème, the Oregon State women’s basketball team is in the “next four out” category fo…

When Ellie Mack decided to join the Oregon State women's basketball program as a grad transfer for this season, the Beavers expected the forme…

Oregon State senior guard Aleah Goodman drives to the basket against Stanford. The Beavers have won five of six, with the lone loss coming to then-No. 5 Stanford in a game the Beavers trailed 49-48 midway through the third quarter before the Cardinal pulled away.

Oregon State sophomore Taylor Jones leads the Pac-12 in rebounding at 8.6 per game and is second in field goal percentage at 58.6%.