OSU women's basketball: Beavers pull away down the stretch to upset No. 8 UCLA
0 comments
Share this
{{featured_button_text}}
1 of 2 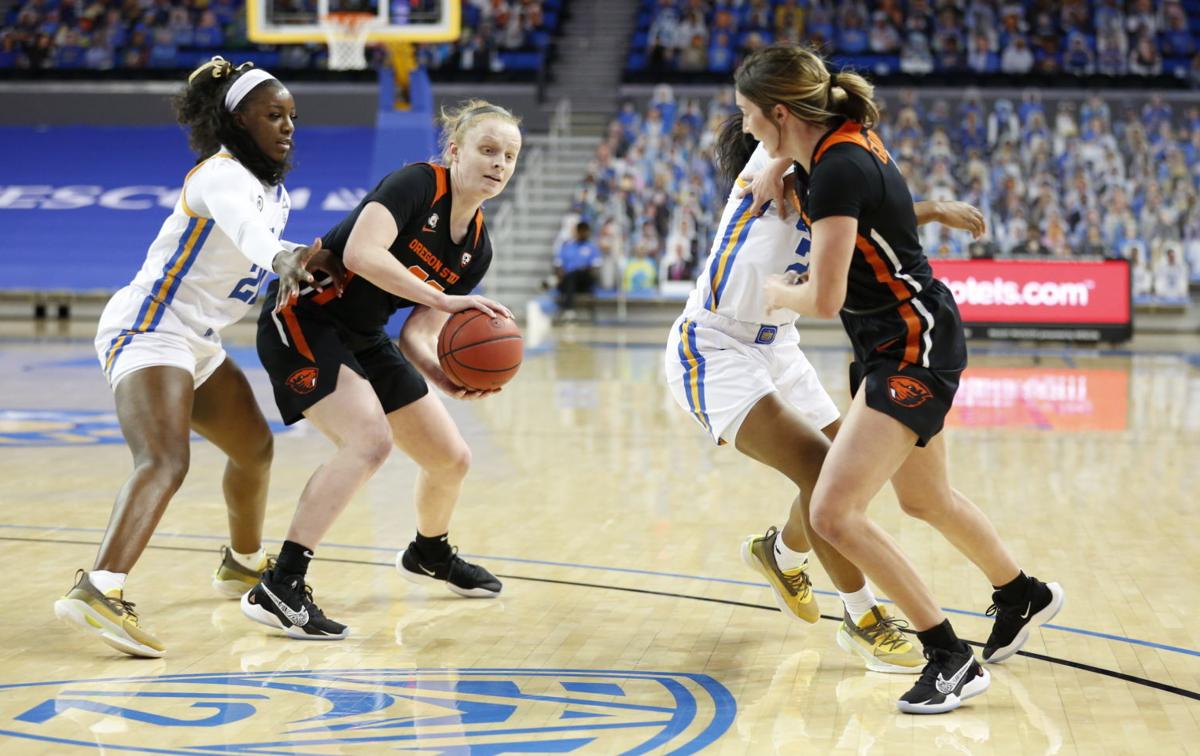 Oregon State's Ellie Mack makes a pass to a cutting Aleah Goodman during the Beavers' 71-64 upset of No. 8 UCLA on Sunday afternoon. 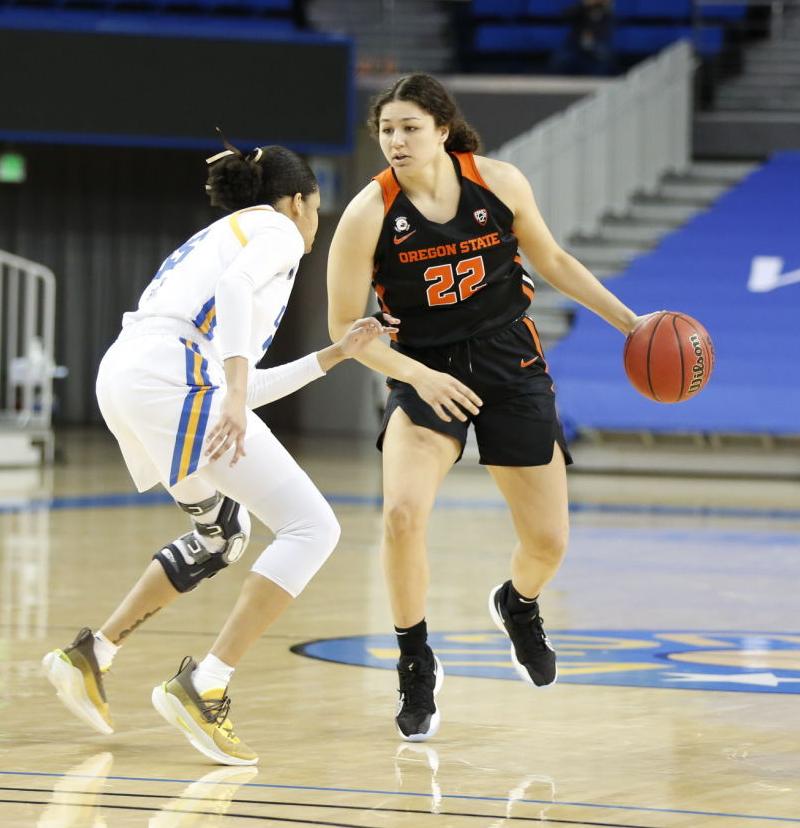 Oregon State freshman Talia von Oelhoffen had 13 points and six rebounds off the bench and hit the go-ahead 3-pointer that gave the Beavers the lead for good midway through the fourth quarter.

There were times this season when it seemed like the Oregon State women’s basketball team snatched defeat out of the jaws of victory instead of the other way around.

But on Sunday afternoon at Pauley Pavilion, the Beavers showed their growth and a newfound determination not to allow that to happen again.

Oregon State scored 14 of the final 21 points in what was a tie game and completed a weekend road sweep in Los Angeles with an impressive 71-64 upset of No. 8 UCLA for their fifth Pac-12 win in the last six games.

“This is 80 minutes that we'll be talking about for a while,” coach Scott Rueck said Sunday.

Aleah Goodman scored 20 points, dished out nine assists and pulled down seven rebounds as she broke into the top 20 in career scoring at Oregon State.

Taylor Jones added 16 points and 11 rebounds in 22 minutes as she battled foul trouble, and Talia von Oelhoffen added 13 points and six rebounds off the bench as she continues to play a major role in the Beavers’ success. OSU is 5-2 since she played her first game.

Deadlocked at 57 with just under six minutes left, it was von Oelhoffen who canned a 3-pointer to start the Beavers’ closing spurt. Jones split two free throws and Goodman hit a layup for a 63-57 lead with 3:33 to play.

“Just a cold-blooded three,” Rueck said of von Oelhoffen’s shot. “I thought that was one of the biggest shots of the game. They went and zone out of a timeout, and she's just like OK. Aleah hits her and she hits a deep 3 like it's a layup.”

Michaela Onyenwere scored four straight for the Bruins (13-4, 11-4) but Goodman drained a 3 and Jones scored inside to push the lead to 68-61 with 58 seconds left.

OSU hit three free throws before a late 3-pointer by the Bruins capped the scoring.

“We got the stops today defensively, where you think about a close game earlier against Washington State, I mean that was absolutely winnable game but we just weren't ready to win it yet. We just didn't have enough experience to close them out,” Rueck said. “Now we do.”

UCLA was just 5 for 22 from beyond the 3-point line Sunday after hitting six in the first quarter against the Ducks.

“I'm extremely, extremely proud of my team and just how well we just executed down the stretch, especially,” Goodman said. “And then just our defense, that's something that we've really been focusing on and just kind of harping down on defense and rebounding. And then just to see those two things really coming together, especially down the stretch, I'm just extremely proud of them.”

The Beavers also won the rebounding battle, 45-39. They did surrender 17 offensive rebounds but only 15 second-chance points.

UCLA used a 10-2 run to close the third quarter to take a 52-51 lead on an Osborne floater that gave the Bruins their first advantage since the 7:40 mark of the second quarter.

The Beavers had taken a 49-42 lead on a Goodman layup with 2:32 left in the period. But they got only a Sasha Goforth layup with 1:17 left the rest of the way.

Jones scored the Beavers first four points of the third quarter but picked up her third foul and sat the final eight minutes. She played just 12 minutes in the first three quarters.

The Beavers took a 36-31 lead into the half after a 23-13 edge in the second quarter. It would have been an eight-point lead but Onyenwere was fouled on a 3-pointer in the closing second and hit all three free throws.

Oregon State scored the first seven points of the second with Goforth’s 3 putting the Beavers up 20-18. Goodman canned a triple midway through the period and OSU led 29-22 as UCLA struggled to score. A von Oelhoffen conventional three-point play put OSU up by eight, its largest lead of the half.

The Beavers were 9 for 20 from the field in the second while UCLA was just 4 for 17.

Onyenwere had 13 for the Bruins, with 10 coming in the first quarter when UCLA scored the final eight points to take an 18-13 lead into the second.

Miller scored six of her eight points in the second to help keep the Bruins in the game. Goodman had 11 and von Oelhoffen 10 at the half for the Beavers, who played the last six minutes of the half without Jones, who picked up her second foul.

The Beavers had a 24-19 edge on the glass in the first half but the Bruins were 12 for 12 from the free-throw line to keep the game within striking distance.

Rueck said Sunday that a this time the Beavers have yet to schedule any makeup games this week, so next Sunday's game at Oregon to close out the regular season is all that is on the slate at this time.

When Oregon State dropped a 77-75 overtime decision to Washington State on Jan. 24, it was the Beavers' fifth straight loss and they had not w…

When Ellie Mack decided to join the Oregon State women's basketball program as a grad transfer for this season, the Beavers expected the forme…

Oregon State's Ellie Mack makes a pass to a cutting Aleah Goodman during the Beavers' 71-64 upset of No. 8 UCLA on Sunday afternoon.

Oregon State freshman Talia von Oelhoffen had 13 points and six rebounds off the bench and hit the go-ahead 3-pointer that gave the Beavers the lead for good midway through the fourth quarter.