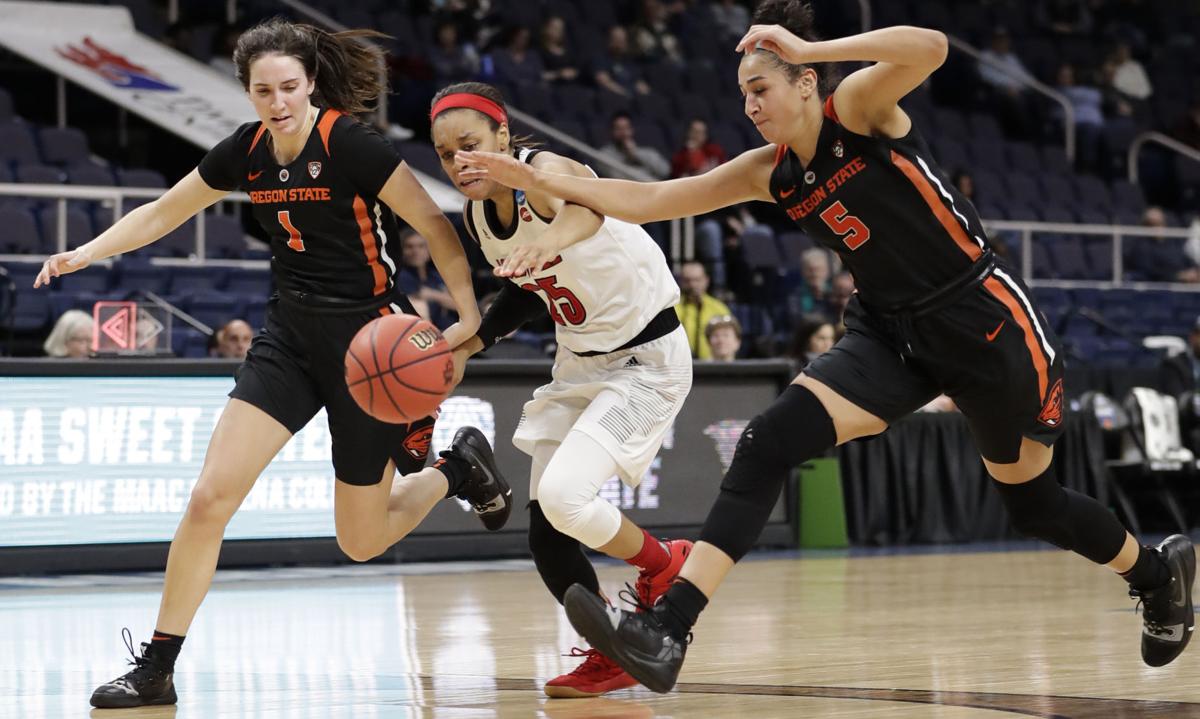 Oregon State's Aleah Goodman, left, and Taya Corosdale, right, try to keep the ball away from Louisville guard Asia Durr in the Albany Regional semifinals in 2019. Goodman and Corosdale have stepped into a leadership role this year as the only two four-year players in the program. 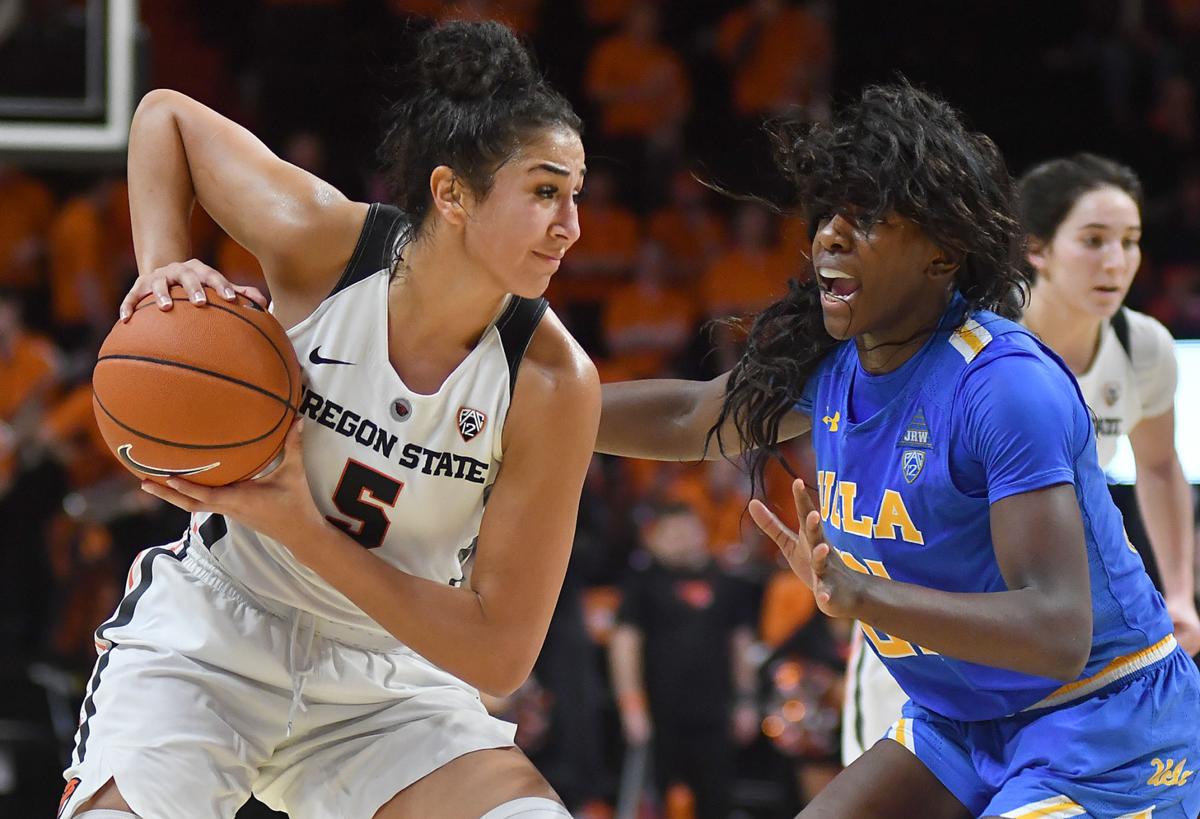 Oregon State forward Taya Corosdale (5) started her first two seasons with the Beavers but missed most of last season with an injury. She is back on the court as one of the more experienced players.

It wasn’t all that long ago that Aleah Goodman and Taya Corosdale were bright-eyed freshmen embarking on their college basketball careers at Oregon State.

They had the luxury of learning how to go about their business from the likes of Marie Gulich and Katie McWilliams their first couple seasons with the Beavers.

They could also defer at times last season to a strong senior class, led by Mikayla Pivec and Kat Tudor.

Goodman and Corosdale have taken over the leadership role as they attempt to get five newcomers — three freshmen and two transfers — up to speed in a condensed time thanks to the COVID-19 pandemic that has limited time on and off the court together.

“It's time for others to step up, and that's the opportunity that's created,” coach Scott Rueck said. “So I look at this group and the level of communication that was necessary through the spring with being separate, the way this team has stepped up and risen and leadership has evolved.”

It has started with Goodman, a senior and Corosdale, a redshirt junior who missed last season with a leg injury.

“It’s almost kind of a challenge because you have to figure out incorporating new people and incorporating people who've already been here,” Goodman said at the start of official practice a few weeks back.

“It's on me to kind of get the team together and be cohesive. So that's been a lot of fun for me. I love that type of stuff and that's something that I really enjoy is kind of being one of the leaders and really kind of pulling people together.”

Goodman was the Pac-12 Conference’s first sixth player of the year following her sophomore season, then stepped into a starting position last season as the Beavers were poised to make their seventh straight NCAA tournament appearance before it was canceled.

Corosdale started her first two seasons before being hurt a couple games into last season.

Both have gotten rave reviews from teammates.

“I think the biggest thing with Aleah is just her willingness to impart information and knowledge she has gained over the last three years to other new people,” said Mack, who had a career average of 11.1 points and 5-6 rebounds over three seasons with the Bison.

“I've been around college basketball so I have a general idea of what I'm doing but our freshmen are super talented, they just haven't had the time to adapt. And Aleah has been great about pointing out certain parts of our system that are hard to learn.

“And she’s a super competitor and that just elevates everyone in our practice. I’m sure once we start playing games she’s going to have a huge role in that as well.”

Sophomore Taylor Jones, who started every game as a freshman and was named to the preseason all-conference team by a vote of the media, had similar things to say about Corosdale.

“I think Taya has definitely stepped up in a leadership position,” Jones said, noting that Corosdale may not have always been the most vocal on the court but is growing in that area.

Their acceptance of that role early has been key for the Beavers as they prepare for a season unlike any before.

“(Taya) and Aleah I think are taking on this leadership role very seriously,” Jones said. “When we were in quarantine those first few months they had us in group chats, texting every single day, like setting up Zoom calls and FaceTime calls just so we could stay in contact.

“And I think that leadership has definitely carried on through now. And it's helping us a lot on the court. I think they're able to help us walk through a bunch of stuff, helping the freshmen, helping everyone that needs help. And because of that people aren't afraid to ask for help.”

Scott Rueck, who had just been hired to take over an Oregon State women’s basketball program that was looking at a major rebuild, was out on t…

OSU women's basketball: Mack ready to challenge herself against some of the nation's best

Despite being on campus only a few weeks, Taylor Jones wasn’t bashful about sharing her goal for her freshman season as a member of the Oregon…

OSU women's basketball: Beavers will have new look in 2020-21

Four years ago, the question surrounding the Oregon State women’s basketball program was how on Earth were the Beavers going to be able to rep…

OSU women's basketball: Beavers make adjustments at half and pull away for blowout win

Scott Rueck knew that Montana Western was going to present a challenge for his No. 18 Oregon State women’s basketball team.

OSU women's basketball: Beavers get contributions up and down the roster

Oregon State's Aleah Goodman, left, and Taya Corosdale, right, try to keep the ball away from Louisville guard Asia Durr in the Albany Regional semifinals in 2019. Goodman and Corosdale have stepped into a leadership role this year as the only two four-year players in the program.

Oregon State forward Taya Corosdale (5) started her first two seasons with the Beavers but missed most of last season with an injury. She is back on the court as one of the more experienced players.