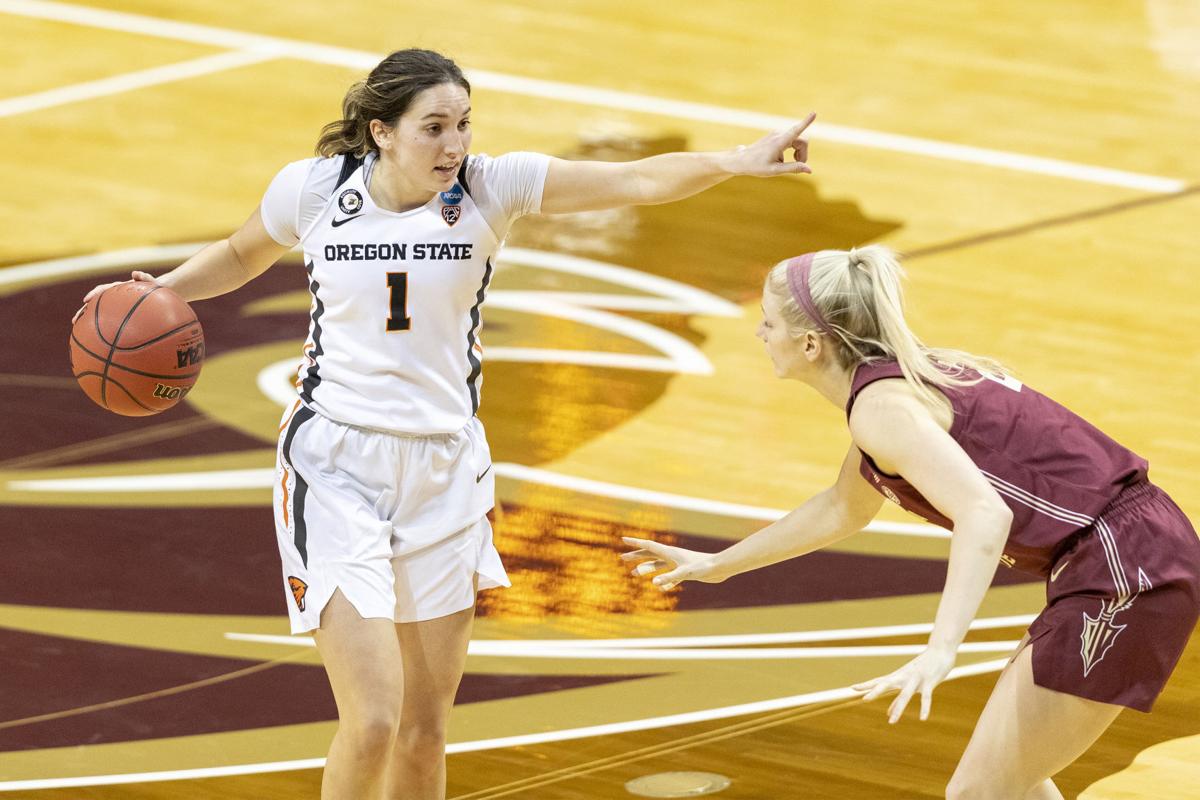 Oregon State's Aleah Goodman, left, could return for another season and said Tuesday she will begin to talk with coaches and her parents about her decision. 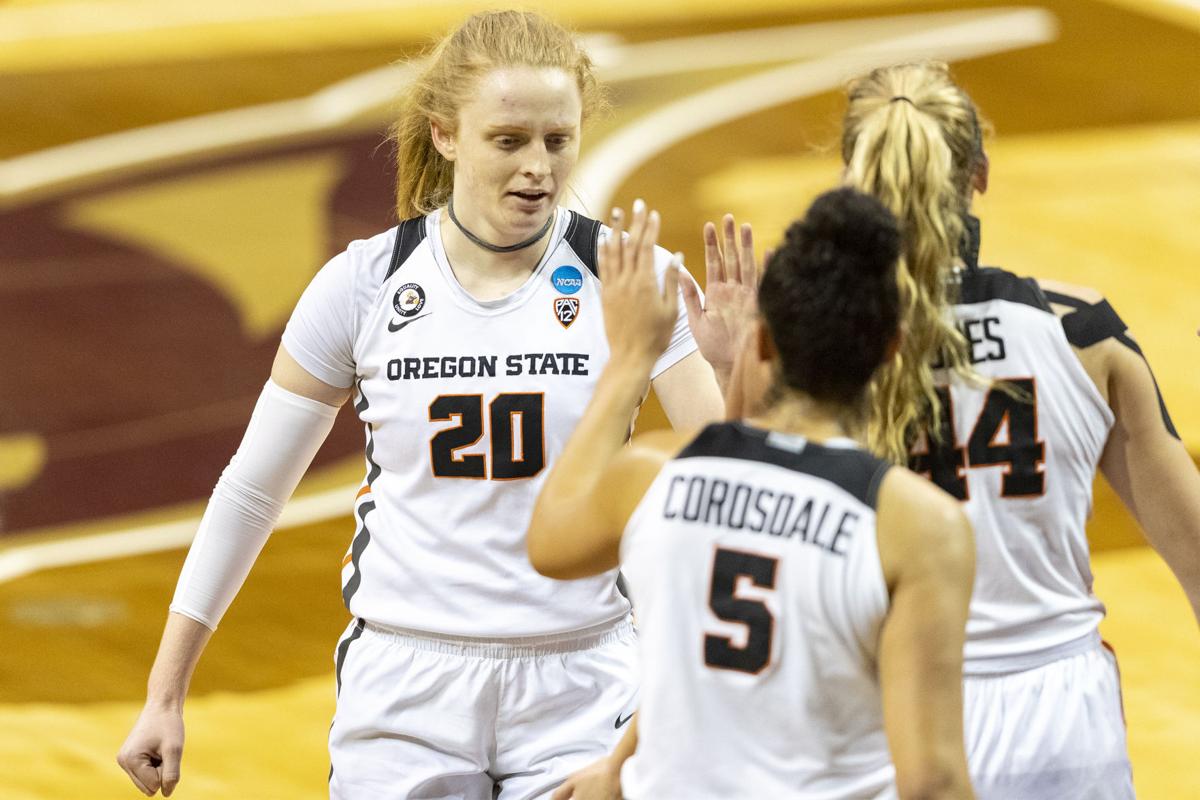 Oregon State's Ellie Mack (20) and Taya Corosdale (5) celebrate against Florida State. Mack started all 20 games in her first season with the Beavers.

Tuesday night may have been the last time Aleah Goodman put on an Oregon State women’s basketball uniform to take the court as a member of the team.

Or, the point guard who elevated her game and was the leader on and off the court this past season, could return for a second “senior” season.

That’s because the NCAA granted all Division I athletes an opportunity for an extra season of eligibility because of the chaos that has surrounded the coronavirus pandemic.

Goodman, who averaged 16.2 points and a shade under five assists per game this season, was asked a couple times as the season was drawing to a close about her plans for next season. She held steady with the same response and reiterated her stance following Tuesday’s 59-42 loss to No. 1 seed South Carolina in the second round of the NCAA tournament.

“I haven't really thought about it, my sole focus was on this year and this team,” Goodman said. “So I think conversations, obviously with coaches, staff, my parents are something that I’ll have and then I'll figure it out down the line for sure.”

Goodman isn’t the only player who could come back for another run. Ellie Mack, a grad transfer from Bucknell and the Patriot League’s player of the year in 2019-20, could also return, as well as Washington State transfer Jovana Subasic.

Mack started all 20 games for the Beavers in her first season and finished averaging 6.8 points and 3.7 rebounds a contest. Subasic played in just 10 games and averaged 1.9 points and 1.3 rebounds a game.

Coach Scott Rueck said he hasn’t had many conversations with those players about their plans but that should happen in the near future.

“I haven't put that pressure on them at all,” Rueck said. “They know that they're all welcome to come back. They’re amazing people, amazing players, just a joy to be around, amazing culture people and obviously very talented. And so they're welcome here as long as they can be here, and we'll have those discussions coming up.”

How long can Rueck wait to find out before starting to plan for the 2021-22 season?

“Would I take them in September? I hope I don't have to wait that long for an answer,” he said. “But that's what's up next is how we look going into next year, what are people going to do. And so our exit meetings are going to come up pretty soon and we'll know more than I'm sure.”

Losing Goodman would be a big hit on and off the court for a team that made great strides over the past seven weeks. The Beavers were an afterthought for the NCAA tournament at 3-5 and having been on pause for 29 days. They countered by winning six of their last seven regular-season games and won two more games to reach the semifinals of the Pac-12 tournament.

That streak helped the Beavers not only make the NCAA tournament but earn a No. 8 seed.

The Beavers have the talent on the roster, as well as a five-star guard in Greta Kampschroeder, who was a McDonald’s All-American this year, to challenge for a top-three finish in the ultra-competitive Pac-12.

Throw in the return of Kennedy Brown, who sat out the season while rehabbing a torn ACL suffered in February 2020, and the Beavers are, as they say, loaded.

And it sounds like they will have plenty of leadership to replace what Goodman provided — if she decides not to return.

“I mean the first person that pops in my mind is Taya Corosdale. She's been there by my side through this whole thing,” Goodman said, trying to fight back the tears. “I think she'll definitely be the one to step up. And then obviously Taylor Jones is a loud voice. Then someone who made a huge difference off the floor this year was Kennedy Brown. She just has a way of bringing everyone together. So I think those three, and they're gonna do a phenomenal job.”

Xzavier Malone-Key is the latest player to sign with the Oregon State men's basketball season for the 2021-22 season.

Oregon State's Aleah Goodman, left, could return for another season and said Tuesday she will begin to talk with coaches and her parents about her decision.

Oregon State's Ellie Mack (20) and Taya Corosdale (5) celebrate against Florida State. Mack started all 20 games in her first season with the Beavers. 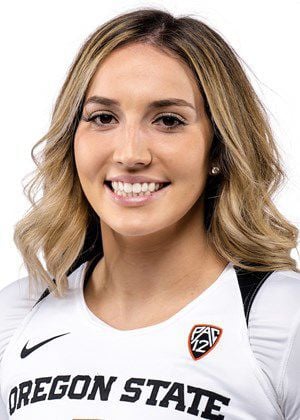