Falcons vs. Panthers: Scores and updates from TNF

OSU women's basketball: Pivec excited, anxious for WNBA draft and her future
Share this
{{featured_button_text}}
1 of 2 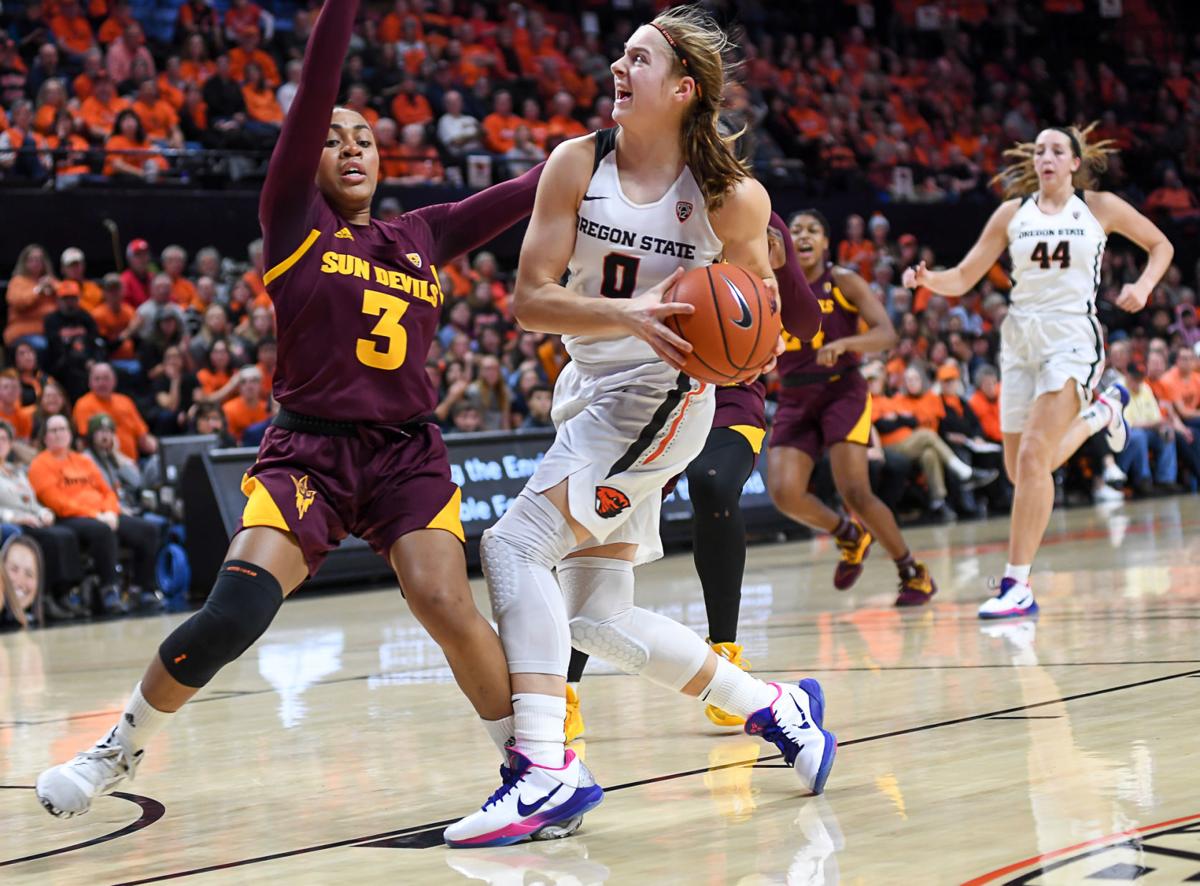 Oregon State's Mikayla Pivec is expected to be selected in Friday's WNBA draft after a standout career at Oregon State that saw her score 1,641 points, grab a program-record 1,030 rebounds and dish out 499 assists. 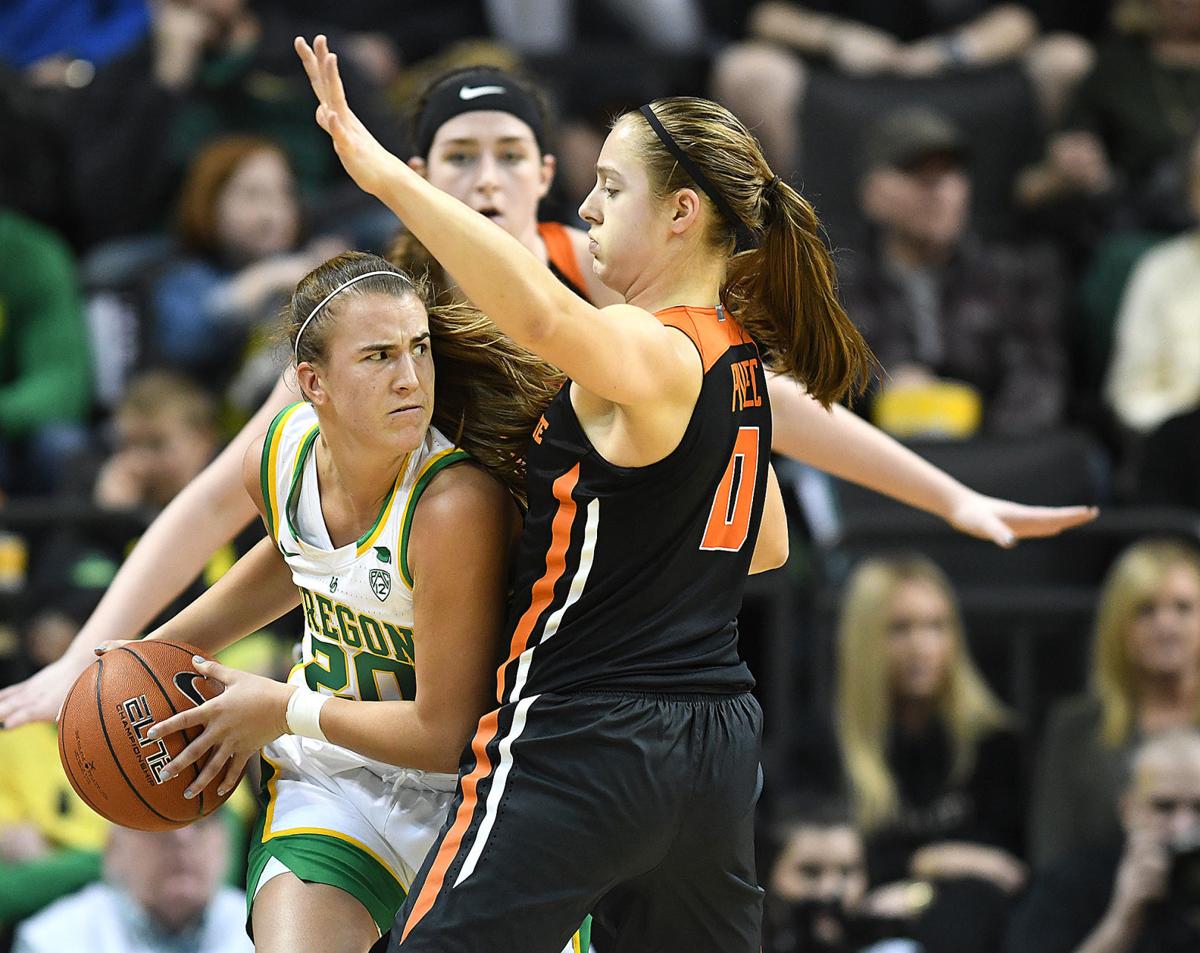 Oregon State's Mikayla Pivec, left, clamps down the defense on Oregon's Sabrina Ionescu this past season. Pivec was named to the Pac-12's all-defensive team this season.

Mikayla Pivec had a simple — although not easy to accomplish — goal when she first stepped on campus to play basketball at Oregon State out of  Lynwood High back in 2016.

Help the Beavers make a return trip to the Final Four and have a shot at a national title.

While the Beavers came oh so close in 2018, falling to Louisville in the Elite Eight, Pivec felt confident her senior season would be the year to reach that goal.

Injuries, hardships away from the court and one of the toughest schedules in country couldn’t change her feelings. However, the COVID-19 pandemic trumped everything.

Pivec’s illustrious career came to a premature and crashing halt thanks to the outbreak of the novel coronavirus.

The NCAA women’s basketball tournament was canceled and while there was a sliver of hope the NCAA might grant seniors one more year of eligibility, that, too, was denied.

Had the decision been different, you can bet Pivec would have jumped at the chance to don the orange and black and play in front of Beaver Nation for one more season.

Instead, she will settle for a potential opportunity to play in the WNBA.

“I wasn't able to do that,” Pivec said Tuesday of missing out on a Final Four. “… And so if I got another shot to just stay and go for that opportunity then I would have loved to do. You can have a very long professional career 8 to 10-plus years (but) you’ve only got that small amount of time in college.”

Pivec is expected to be selected at some point in Friday’s draft, which will air on ESPN starting at 4 p.m.

She said she has talked with some assistant coaches and assistant general managers over the past few weeks to help them gauge how she might fit into their organizations and to glean from them what they feel her strengths are and areas she could improve in to make a team.

Obviously her rebounding was a topic of conversation. How many 5-foot-10 guards end up as the program’s all-time leading rebounder?

"They think I'll be one of the best rebounding guards possible,” Pivec said. “Like that will continue, maybe not the same numbers, probably not same numbers, but it'll be as a guard something I will be able to do really well.”

Teams were also impressed with her court vision and then ability to create for her teammates.

She also said an area she needs to work on in order to reach the next level is her ability to change pace and create more separation from defenders instead of trying to overpower players. She could also work on having a quicker release on her shot, especially from beyond the 3-point line.

Pivec, who finished her career with 1,641 points, 1,030 rebounds and 499 assists, said she has also talked with former teammates Sydney Wiese and Marie Gulich about the draft process. Wiese was selected by the Los Angeles Sparks with the 11th overall pick in the 2017 draft and Gulich went No. 12 to Phoenix in 2018. Gulich will join Wiese in Los Angeles this season after the Sparks acquired her via trade recently.

“Before the draft they had called and talked to a couple teams but then those teams weren’t necessarily the ones who drafted them,” Pivec said of Wiese’s and Gulich’s experiences. “If you're not like one of the top two, three or four picks, it's kind of unknown where you might go and kind of a fluid process.”

Pivec said her former teammates' advice was to “just enjoy the process and to not worry about where you're going and just enjoy each day. And then once you figure it out, just be happy wherever you’re selected to go.”

As to be expected, Pivec is running the gamut of emotions as she prepares to hear her name called on Friday night.

“Yeah, a little bit of everything,” she said. “I'm super excited. I'd be lying if I said there weren't any nerves because you don't know what to expect. You could go to this team, that team, another team, you don’t exactly know. You obviously have certain places that you think would be dream scenarios. But you're super happy with whatever opportunity, whatever team makes a decision to add you to their organization.”

Pivec will watch the draft from a friend’s home in Boise, Idaho, where she is staying with her sister, Malia, a student at Boise State. They will connect with their parents as they are back home in Lynwood.

“They will be virtually there on the computer screens around for the virtual draft,” Pivec said. “So they'll be in the room and be able to experience that with us and be there kind of in spirit.”

OSU women's basketball: Beavers navigating an emotional season on and off the court

Oregon State was in the midst of its best start to a women’s basketball season in its history.

OSU women's basketball: Mikayla Pivec leaving lasting legacy on and off the court

Mikayla Pivec made her way around the Boys & Girls Club of Corvallis on a Monday afternoon, checking in with her Oregon State women’s bask…

OSU women's basketball: Beavers steal one in the closing seconds

With a play that Katie McWilliams made famous in the lore of Oregon State women’s basketball, Mikayla Pivec added yet another chapter in the i…

It doesn’t appear there is much Oregon State’s Mikayla Pivec can’t do on the basketball court.

Oregon State's Mikayla Pivec is expected to be selected in Friday's WNBA draft after a standout career at Oregon State that saw her score 1,641 points, grab a program-record 1,030 rebounds and dish out 499 assists.

Oregon State's Mikayla Pivec, left, clamps down the defense on Oregon's Sabrina Ionescu this past season. Pivec was named to the Pac-12's all-defensive team this season.