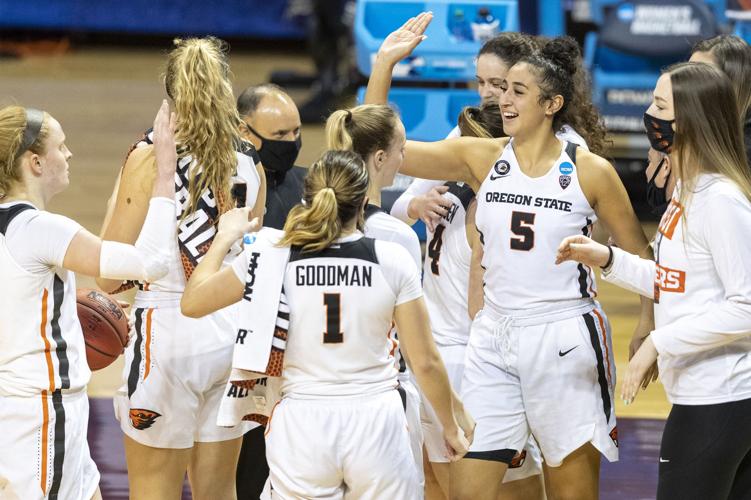 Oregon State's Taya Corosdale (5) celebrates a win over Florida State in the first round of the NCAA tournament this past season. The Beavers may have had four players depart the program for various reasons but Corosdale will be back for a team that appears to have a bright future. 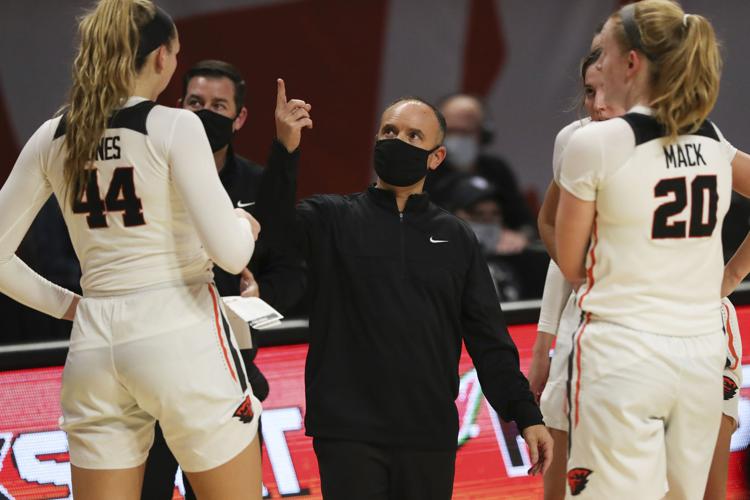 Oregon State head coach Scott Rueck, center, has some holes to fill on his coaching staff but is excited to see who he hires and how they will leave an imprint on the program.

So much has changed for the Oregon State women’s basketball program in the five-plus weeks since the Beavers ended the season with a 59-42 loss to No. 1 seed South Carolina in the NCAA tournament.

Aleah Goodman chose to forgo a possible extra season to declare for the WNBA draft — she was drafted No. 30 overall by the Connecticut Sun.

Jasmine Simmons, after three seasons in the program, decided to return home to Australia.

Then freshmen Sasha Goforth and Savannah Samuel put their names in the transfer portal and found new schools closer to home at Arkansas and West Virginia, respectively.

On top of that, two members of the coaching staff — Brian Holsinger and Katie Faulkner — took jobs elsewhere.

All of a sudden, head coach Scott Rueck had a plethora of holes to fill.

“In anything you realize that change is inevitable,” Rueck said last week. “… It's part of the deal. It’s part what we do and it's part of life, and I always put relationships over circumstances and so while certainly you're sad to see people go if it's before you hoped or whatever my own personal vision of it was, it's not about that, it's just the reality.

“And so it creates opportunity. And so I'm grateful for the time I have with everybody I get to work with and coach and I’m excited about the possibilities that those opportunities create.”

Both Holsinger and Faulkner spent the past five seasons on the staff. Holsinger took over as the head coach at Montana while Faulkner joined new Washington coach Tina Langley as an assistant.

Rueck said he is happy for both of his now former coaches but it’s never easy to see people you work with day in and day out move on.

“It's just like a senior graduating,” Rueck said. “You're just so thankful for the time and you hope they loved every second of it. And here they go off onto the next adventure.”

It’s been five years since Rueck went searching for a new member of the staff. It’s a bit of new territory but he said he knows the right people are out there and whoever comes in will bring plenty of value to the program in their own way.

“Here's an opportunity to find the perfect people to come in and fit into the puzzle now where I'm hoping that they will add new, maybe different, but they'll add to our program in different ways than anybody's done before, which is exciting to me,” Rueck said.

One attribute that Rueck says he has and will always put the most stock into when it comes to finding coaches is their passion to be relational.

Rueck admits it was tough to see Goforth and Samuel leave after just one year. But that seems to be the norm across the women’s college basketball landscape, especially after the past year dealing with the pandemic.

Still, Rueck said he wants to learn from every situation and find ways to make sure players feel like Oregon State is the right fit.

“I'm sad, certainly, that goes against the vision I had for both of them. I mean, I pictured them as seniors on senior day in front of a crazy Beaver Nation going nuts like Beaver Nation does, and I want that for everybody I recruit. So there's some mourning, I'll tell you that, there's some morning to get over because the vision I had for them is over. But I don't think anybody really cares about that but me and so I just say thank you. I loved having them here, and I wish them the best.”

While Rueck has just begun the search for new coaches, he has already added two players to replace the three that left early.

The Beavers signed San Diego State grad transfer Téa Adams and incoming freshman AJ Marrotte, who was originally committed to Washington but changed her mind after the coaching change.

While it is not official, the Beavers reportedly will add Saint Mary’s grad transfer Emily Codding for next season.

All three would fill the guard/wing position.

Those additions and some of the verbal commits they have for the 2022 class — coaches are not permitted to discuss any players who have yet to sign with a program — has Rueck feeling excited and encouraged.

“I don't know how I could feel a whole lot better about our scenario,” Rueck said. “I love who we have, I love who we're adding, I feel like we've been led to perfect complements to go with the group that we have returning. Just amazing people fill this roster. It's hard to keep my enthusiasm down, actually, because I just love working with them. I know who's coming and I think we're going to be really, really good.”

That process begins now as the Beavers have five weeks to connect with players in individual workouts. Despite the turnover, Rueck said the Beavers are focused on moving forward.

“So those great feelings of the way we finished are carrying into the spring. There's great hope, and we've got a group that's really hungry coming back now. And so we have five weeks of workouts and I'm expecting that this group is going to make a lot of progress in this offseason.”

If there is one thing that Rueck will take away from this past season it is how important that relational aspect of the program has become not only within the program but also the fan base.

Rueck feels the Beavers were hurt as much as any by not being able to play in front of the fan base and how important having the entire “family” together makes the program the place people — coaches and players — feel is the right fit.

“All the relational parts of this experience for our students are so vital, and I feel so good about them,” Rueck said. “When things are normal, when we can have fans, we can have events, this experience is so good. And to have those things stripped away hurt this year, and I love that it hurts.

“I think there's a shallow way to do this job and I think there's a shallow way to run a team. We don't do it shallow, we do it deep. And there's a reason that we haven't had many transfers over the years. There's a reason that coaches don't leave. And then it hurts when they do because they literally become family. Everybody feels like they identify with our players as parts of the family. And that's what makes Oregon State women's basketball so special.”

When the sports world shut down back in late March 2020, Josh Worden was in a bit of a tough spot.

Commentary: Lack of open spots means it's time for WNBA to expand, and soon

Leading up to Thursday's WNBA draft, Aleah Goodman admitted she had no idea what to expect.

Years down the road, when Aleah Goodman wants to be nostalgic and reminisce about her four-year journey at Oregon State as a member of the wom…

For the second time in a week, the Oregon State women’s basketball team has lost a first-year player to the transfer portal.

U.S. swimmer rescued by coach after fainting at world championships

Oregon State's Taya Corosdale (5) celebrates a win over Florida State in the first round of the NCAA tournament this past season. The Beavers may have had four players depart the program for various reasons but Corosdale will be back for a team that appears to have a bright future.

Oregon State head coach Scott Rueck, center, has some holes to fill on his coaching staff but is excited to see who he hires and how they will leave an imprint on the program.