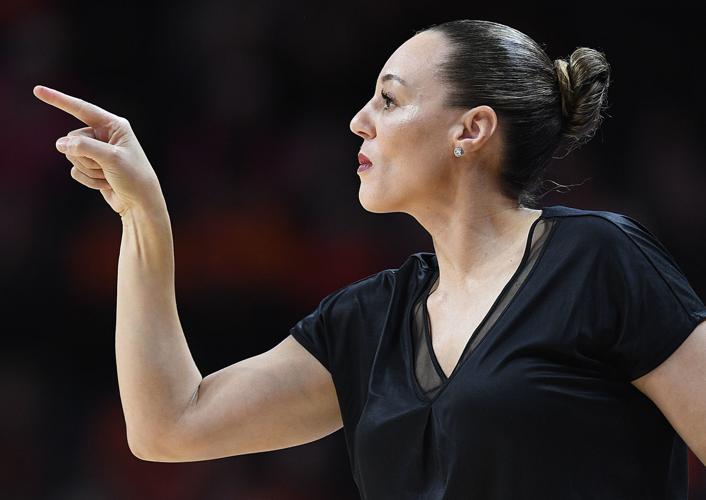 Arizona head coach Adia Barnes has the Wildcats not only in position to make the NCAA tournament for the first time since 2005 but also for a top-4 seed. 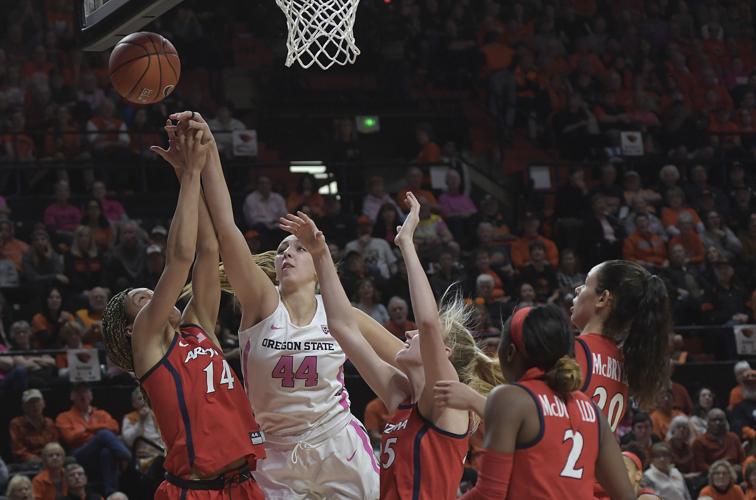 Arizona's defense swarms Oregon State's Taylor Jones in the second half of Sunday's game. Defense has been a staple to the Wildcats' success this season. 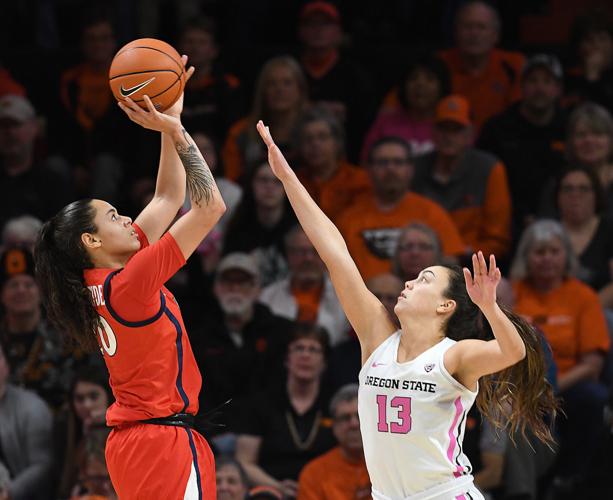 In just her fourth season, Adia Barnes has her alma mater knocking on the door of not only the program’s first NCAA tournament berth since 2005 but a top four seed no less.

Barnes has helped the Arizona women’s basketball team return to prominence and guided the Wildcats earn their first ever road win over a top-10 team with Sunday’s 65-58 overtime win over Oregon State.

So it should be no surprise that as soon as Barnes entered the visiting locker room in the basement of Gill Coliseum, she was doused with water by her players.

“This game was really big,” redshirt junior Aari McDonald said. “Coach Barnes came in the locker room and said this is the first top-10 win on the road so that's just huge for our program. It's a testament to where this program is now and where we're headed in the future.”

The future may be now and boy does it look bright for the Wildcats.

Sunday’s win helped Arizona take control of fourth place in the conference and the inside track to a first-round bye in the Pac-12 tournament the first week of March. This year, that may be bigger than most with how competitive the conference has been with six teams in the top 22 of the AP poll.

That would especially be the case for an Arizona team that doesn't like to slow down on offense of defense.

“So I think that just having rest with our style and the way we press and stuff it would be huge,” Barnes said.

The Wildcats are 19-4 overall and 8-4 in the conference with losses to Oregon (twice), Oregon State and UCLA, all ranked in the top 11 this week. They have also defeated OSU and UCLA the second time around.

Sunday’s win might be the best of the bunch for a team that gained valuable experience and confidence last season by winning the WNIT. Arizona played what McDonald said was their worst game of the season in an 85-52 loss at Oregon on Friday night.

“Pretty much they had their way the whole game with us and we knew we had to regroup,” McDonald said. “You can't get too high or too low in this conference, and so we just came in (Sunday) really focused and we really wanted this game."

Barnes said the bounce-back win showed the character of her team.

“I felt like we didn't show who we were on Friday, we got our butts kicked,” she said. “I didn't feel like we competed. I felt like we laid down and died and that's not who we are. So I challenged them to say hey, how are we going to respond? It’s really easy when things go great, it’s really easy after a great win, but how hard is it when we got our (butt) kicked?

“And so how are we going to respond? Are we going to come out soft or tentative or hesitant or no confidence? I felt like we did a really good job of fighting. And we handled adversity. We were down by seven, we were taking punches and we found the way to battle back one possession at a time. So I'm proud of our team.”

The Wildcats play four of their last six games at home, starting with the Washington schools. They head to the Mountain schools and wrap up the season at home against Stanford and Cal.

Three Pac-12 players — Oregon’s Sabrina Ionescu, Oregon State’s Destiny Slocum and UCLA’s Japreece Dean — were announced Monday as being among the top 10 candidates for the Nancy Lieberman award for the top point guard.

The list will be trimmed to five in March and the winner will be announced April 10.

With UCLA’s upset of Stanford on Friday night, Oregon enters the final third of season in the driver’s seat at 11-1. UCLA and Stanford are both 10-2 while Arizona is fourth at 8-4.

Oregon State, which could be without Kennedy Brown for some time, is fifth at 7-5 and Arizona State is 6-6 after being swept in Oregon after sweeping the Oregon schools at home.

Utah is alone in seventh at 5-7 after sweeping the Washington schools on the road. USC and Washington State are tied for eighth at 4-8 while Washington and Colorado are both 10th at 3-8. California remains last at 1-11.

Oregon and Oregon State begin a tough final third that sees them head to the Los Angeles schools and the Bay Area schools back to back.

Oregon will play UCLA on Friday in a crucial showdown while the Beavers meet the Bruins on Monday in a game on ESPN2.

The mountain schools host the Bay Area schools and the Arizonas host the Washingtons.

Oregon remained at No. 3 on Monday in the AP poll while UCLA jumped from No. 10 to No 7, one spot ahead of Stanford, which dropped two spots.

Oregon State dropped out of the top 10 for the first time this season, coming in at No. 11, a spot ahead of Arizona, which remained No. 12.

UCLA’s Michaela Onyenwere was named the Pac-12 player of the week. The junior scored 29 points in an upset of Stanford on Friday and averaged 25 points and 6.5 rebounds in a road sweep in the Bay Area. It’s her second honor this season.

Utah’s Brynna Maxwell was named the conference’s freshman of the week after averaging 19 points and 5.5 rebounds a game in a road sweep of the Washington schools. It’s her first honor.

OSU women's basketball: Beavers fall to No. 12 Arizona in overtime

There would be no dramatic finish on Sunday.

Kennedy Brown was upbeat and hopeful Friday night as she celebrated with her Oregon State teammates after a thrilling 64-62 win over No. 19 Ar…

OSU women's basketball: Beavers navigating an emotional season on and off the court

Oregon State was in the midst of its best start to a women’s basketball season in its history.

OSU women's basketball: Beavers steal one in the closing seconds

With a play that Katie McWilliams made famous in the lore of Oregon State women’s basketball, Mikayla Pivec added yet another chapter in the i…

OSU women's basketball: Beavers head on the road for next four games

Oregon State’s women’s basketball loss to Arizona in overtime on Sunday was a tough pill to swallow for Beavers.

Rueck, Blacklock on loss to Colorado

Rueck, Blacklock on loss to Colorado

Arizona head coach Adia Barnes has the Wildcats not only in position to make the NCAA tournament for the first time since 2005 but also for a top-4 seed.

Arizona's defense swarms Oregon State's Taylor Jones in the second half of Sunday's game. Defense has been a staple to the Wildcats' success this season.